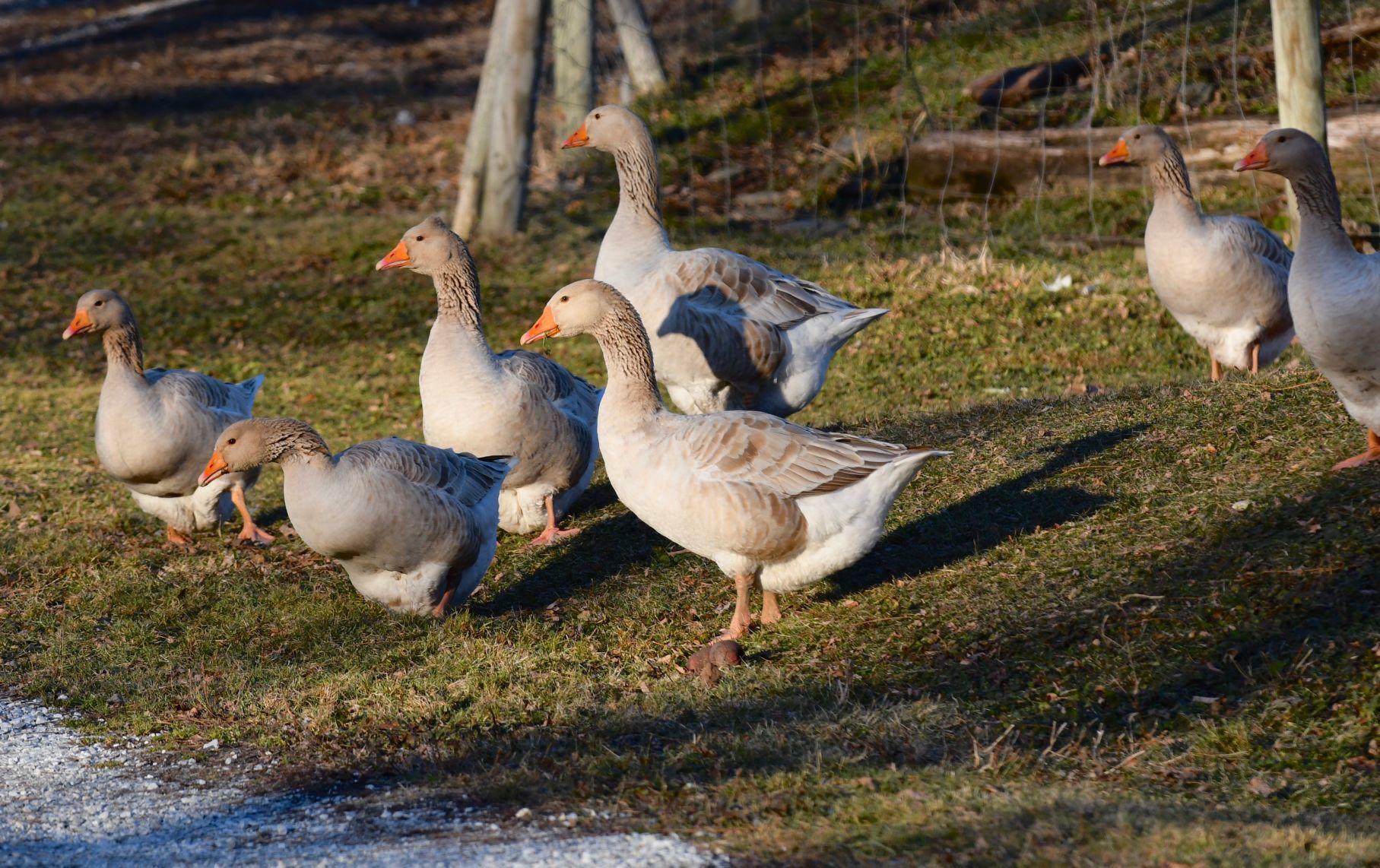 Foraging at the farm

Geese forage at a farmstead along Route 140 in Middletown Springs on Monday afternoon.

A local man was found competent on Monday to be tried for murder in the death of longtime girlfriend, Trina Fitzgerald, 58, at their home on Madison Street in August 2017.

Randal S. Johnson, 60, was arraigned in September 2017 in Rutland criminal court on a felony count of second-degree murder.

The competency hearing on Monday in Rutland criminal court was brief. Judge David Fenster asked if both Rutland County State’s Attorney Rose Kennedy and attorney Daniel Maguire, who represents Johnson, had seen a report that found Johnson was competent to stand trial.

Maguire told Fenster that based on the report, the defense was stipulating to Johnson’s competence.

Fenster said the report was “relevant and probitive” so he agreed to finding Johnson competent.

Maguire said he anticipated the court would ask what steps would be taken next and asked that a trial be scheduled no sooner than April.

Kennedy anticipated the trial would take no longer than four days, leaving Fenster to tell the attorneys the court staff would be looking for a block of four days in April or later for the trial.

Johnson was charged with causing the death of Fitzgerald, whose cause of death according to a final autopsy report was ‘neck compression’, based on an investigation by the Rutland City Police Department following up on their response to an incident at the home of Johnson and Fitzgerald on Aug. 27, 2017.

The incident happened in a short period of time: Police arrived around 9:50 p.m. and spoke to Johnson and Fitzgerald who had been in a relationship for 12 years.

While she allegedly told police Johnson put his hand over her nose and mouth for about two minutes, Fitzgerald declined medical attention, police said.

Officer Tyler Billings wrote in an affidavit that Johnson left the home during the investigation..

“Fitzgerald was coughing more at this point and I again asked her if she needed an ambulance. She was adamant that she did not and would be fine when Johnson left. When I left the apartment, Fitzgerald was sitting in her chair in the living room coughing,” Billings wrote.

Police did not see any injuries to Fitzgerald and left at 10:09 p.m., believing the situation has been resolved.

At 10:13 p.m., Fitzgerald called 911 to say she was having difficulty breathing. An ambulance was at the home by 10:19 p.m. but emergency responders had to pry the door open.

Fitzgerald did not respond to the emergency responders, and had no pulse. She was pronounced dead at 10:48 p.m.

Police said in their report that Johnson and Fitzgerald were not arguing by the time they first got to the home on Aug. 27, 2017, but they noted Fitzgerald “appeared to be in distress.” She was crying, coughing and her face was bright red, police said.

Johnson denied he put his hands on Fitzgerald but told police he believed Fitzgerald needed an ambulance because she may have been having a panic attack.

Bundock noted hemorrhages, or profuse bleeding often from a burst blood vessel, on Fitzgerald’s upper lip, larynx and the soft tissues above her collar bones and little bursts of blood in her eyes. Contusions were also found on the left side of her neck and across her upper back and left shoulder bone.

Bundock said “force was applied to Fitzgerald’s neck which may have caused swelling.”

Johnson was interviewed again on Aug. 28, 2017, but again denied putting his hands on Fitzgerald.

During a third interview in August 2017, Johnson said he did not want to answer questions without an attorney.

Johnson does not have a criminal record.

If convicted of the second-degree murder, Johnson would face a presumptive minimum of 20 years in jail and a maximum sentence of life in prison.

Vermont’s representative to the U.S. House hopes the Senate will call witnesses and seek information the House wasn’t able to get during its impeachment hearings.

House Rep. Peter Welch, D-Vt., spoke to his constituents via conference call on Monday, days ahead of a vote in the U.S. House of Representatives on whether or not to impeach President Donald Trump.

Roughly a score of people called in with questions during the hour-long session. Welch explained some aspects of the impeachment process, his thoughts on the two articles of impeachment the House will vote on, and what he hopes the Senate will do.

“We don’t know what’s going to happen,” said Welch, when asked by a caller what it would mean for the country if the Senate votes not to convict Trump. “I expect the House will vote, unfortunately, along partisan lines on the impeachment article against President Trump. In the Senate, Mitch McConnell, he wants to have a so-called ‘very quick trial,’ and there’s not been any indication from my Republican counterparts in the Senate that they are open to hearing more evidence.”

He said he hopes the Senate will call witnesses to testify that the House wasn’t able to. He said the Senate is what sets the rules of the trial.

“My hope, in the Senate, where they can set the rules of the trial, is that in fact they will request information from the President, get documents from Vice President Mike Pence, get documents and testimony from Secretary Pompeo, from Mick Mulvaney, that we sought to have testify in the House and the President rejected our subpoenas and efforts. I would like to see the Republican senators make a request of the President to get the evidence, and if the President has exculpatory evidence, he’ll have an opportunity to present it,” said Welch.

He said if the Senate doesn’t vote to convict Trump, then “Ultimately it will be the American voters who have the final say about our future.”

A caller from Rutland named “Janet” wondered how Senators can say how they’ll vote ahead of a trial.

“How can they vote without hearing evidence? And if they do so, can they be held in contempt of court? And is this voting considered a court-sanctioned event?” she said.

Welch said it’s a good question, “but my answer may depress you.” He said the impeachment process isn’t like a court trial. The Senate is the jury, but it also sets the rules for the trial, which isn’t done in a criminal or civil court.

“I’ve been alarmed by some of the things I’ve seen happen over there,” Welch said. “Senator McConnell has said he’s coordinating actively with the White House, so how does a juror essentially coordinate with a defendant?”

He said it’s disturbing, but the Senate has that authority.

“It’s why I’m urging my colleagues in the Senate to get the evidence. That just seems fair and common sense,” said Welch. “We have not been able to get these people who have enormous information, like Pompeo, the Secretary of State, or Mulvaney, the White House Chief of Staff, or the Vice President. The Senate could ask them to come in, compel them to come in, or tell President Trump unless they come in they’re going to regard that as an admission.”

He said the House subpoenaed many witnesses, who were ordered by Trump not to respond. “And he did this while saying if he released all these things, it would exonerate him, and obviously that’s pretty bogus,” Welch said, adding that were the Senate to ask these things of Trump, its Republican majority would be harder for Trump ignore or resist.

“At the heart of this, I think a lot of people want to get as much evidence as possible so they can make a decision and come to their own conclusion. Essentially you have the Senate Majority Leader, Senator McConnell, hand-in-glove with the White House lawyer, and you obviously are not going to get an outcome that’s based on the evidence, so that’s the big issue.”

Welch has a portion of his web page devoted to the impeachment hearings, containing reports and information on the process. It can be found at https://welch.house.gov/impeachment. 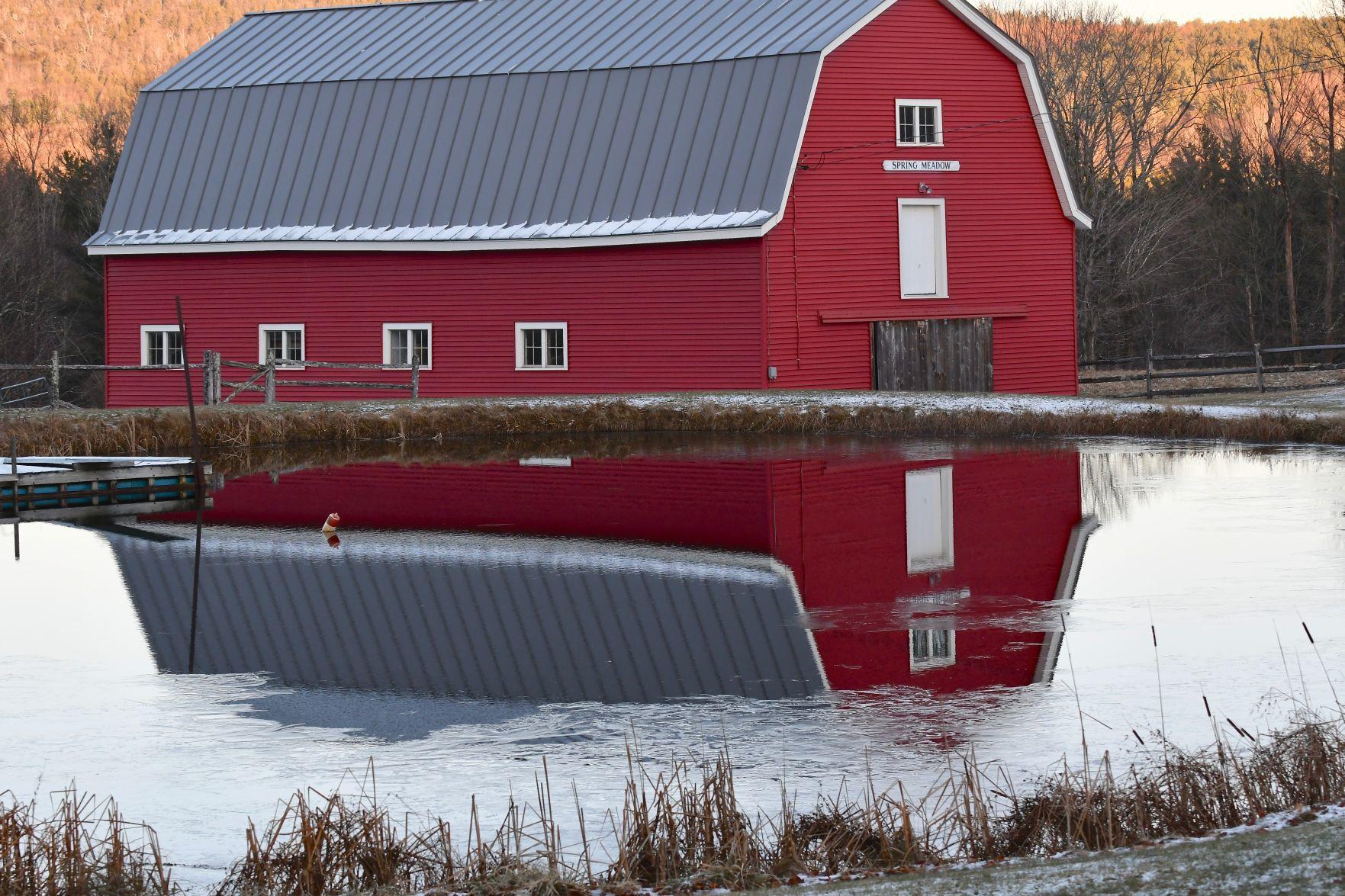 A red barn reflects in a still-unfrozen pond in Tinmouth on Monday afternoon.

Jupiter is rising over Merchants Row.

The Board of Aldermen voted Monday to approve a $5,000 grant to help Jupiter Rising Bakery relocate from Howe Center to 74 Merchants Row.

“That was the old BodyTech space,” Rutland Redevelopment Authority executive director Brennan Duffy told the board. “I think that’s been vacant for about a decade now.”

Duffy, in recommending the board approve the grant from the city’s business incentive program, said owner Tina Clark intended to add two full-time and several part-time employees. The grant, which is funded through tax revenue from solar projects and aimed at helping new businesses start up and existing ones expand, was unanimously approved with no debate.

“We’re going to be doing some more retail,” Clark said.

Clark said she had been in Howe Center for seven and a half years, and that the bakery was on Cherry Street for 14 years before that. She said the move had been in the works for some time, though the location was a last-minute change of plans.

“I was supposed to go into Three Tomatoes,” she said, referring to a long-vacant spot on the ground floor of the state-owned Asa Bloomer Building. “After three months, they decided I didn’t meet their criteria.”

Clark said she expects to be open by Friday, though her donuts will not be available until the building gets a little more work, which she hopes to have done by January.

“It’s hard with holidays and hunting season in the Northeast,” she said of scheduling construction work. “I’m just going to be baking pies and bread and rolls for a while.”

Volunteers laid wreaths on the gravestones of veterans in Castleton as part of a national effort. A2

A woman and her son are waiting on final charges in the death of the woman’s mom. They might be charged with homicide. A3