MONTPELIER — Vermont’s economy is doing OK, unless you’re middle to low-income, in which case the Great Recession never quite ended.

This is according to an annual report released Thursday by the Montpelier-based Public Assets Institute, which looked at economic data collected in 2018.

“An economist looking at Vermont statistics can see that the state is benefiting from the U.S. economic expansion, which became the longest on record last summer: There are more jobs, higher wages, fewer children in poverty,” reads the report. “At the same time, many Vermonters can look at their paychecks and wonder when the recession is going to end. The state’s economic growth continues to favor those who are well off, while low- and moderate-income families wait for things to pick up.”

The Public Assets Institute is a nonprofit think-tank that looks at Vermont’s economic policies from the perspective of the everyday citizen, said Paul A. Cillo, the group’s president, in an interview on Thursday. The Institute has existed since 2003 and has released these “State of Working Vermont” reports since 2006.

Cillo said the report is written with laypeople in mind, however it’s expected that legislators and policymakers will likely read it. It’s arranged in such a way that each item it examined is self-contained and can be readily shared with others.

While the report made no recommendations, it did take issue with how it says the state has gone about budgeting.

“For more than 20 years Montpelier has been guided by an unwritten policy: ‘Manage to the money.’ This means that the amount Vermont spends each year is determined not by the state’s needs but by how much money the current revenue system will generate in the next fiscal year. That principle has stifled more ambitious plans that would have required balancing needs and revenues,” reads the report.

It suggests that by not making key investments, the state has merely delayed financial reckonings.

“Two examples: In 1991, policy makers decided they couldn’t afford the recommended contributions to the state pension funds and started a 14-year stretch of underfunding. Now it’s costing much more to catch up,” reads the report. “State officials have been discussing pollution of Lake Champlain and other state waters for decades, but have not raised the money to reverse it. Now pollution has reached levels so dangerous that authorities are regularly closing beaches, and the costs of cleanup continue to rise.”

Lt. Gov. David Zuckerman said Thursday he intends to read the report more thoroughly over the weekend, but as of Thursday afternoon noted that the document makes a good case for raising the minimum wage, something House Speaker Mitzi Johnson and Senate President Pro Tempore Tim Ashe have said is on their to-do list for the upcoming legislative session.

Zuckerman said what things cost in Vermont is comparable to other New England states, less so is what the lowest earners are being paid.

According to the report, wages have been going up in Vermont, but not for those making the least, and not during a period of low unemployment, when one might expect paychecks to increase.

“In fact, from 2010 to 2018, these workers’ wages did not even keep pace with Vermont’s slowly growing economy, which increased 5.8% during the same period,” reads the report. “Wages for those at the top, however, grew faster than the overall economy.”

“The Public Assets report confirms for me that we need to increase the minimum wage to lift more people out of poverty and reduce their reliance on public programs,” he said Thursday. “It also reminds me how federal trade, tax and spending policies have screwed over people who aren’t rich.”

The report found that changes to the federal tax system made since 2000, including the Tax Cuts and Jobs Act of 2017, mostly benefited wealthier Vermonters.

As for the state tax system, the report called it “minimally regressive.”

“In most states, low-and moderate-income people pay a larger share of their income in taxes than do the top 1% of taxpayers. In recent years, Vermont has increased progressivity, for instance, by curbing some tax breaks that favor people with higher incomes,” reads the report.

This was not high praise, as the report points out that Vermont was among five states that, according to the Institute on Taxation and Economic Policy, have tax systems that “do not worsen income inequality.”

One in nine, or about 66,000, Vermonters were under the federal poverty threshold in 2018, according to the report.

“The total number of Vermonters in poverty exceeded the number before the Great Recession, but remained lower than the 2010 peak,” it reads. “While Vermont’s poverty rate, at 11%, was below the national average, the state rate did not budge much from last year and remained above the 18-year low of 8.5% in 2002. Vermont stood in the middle among New England states — New Hampshire, Massachusetts, and Connecticut had lower poverty rates.” 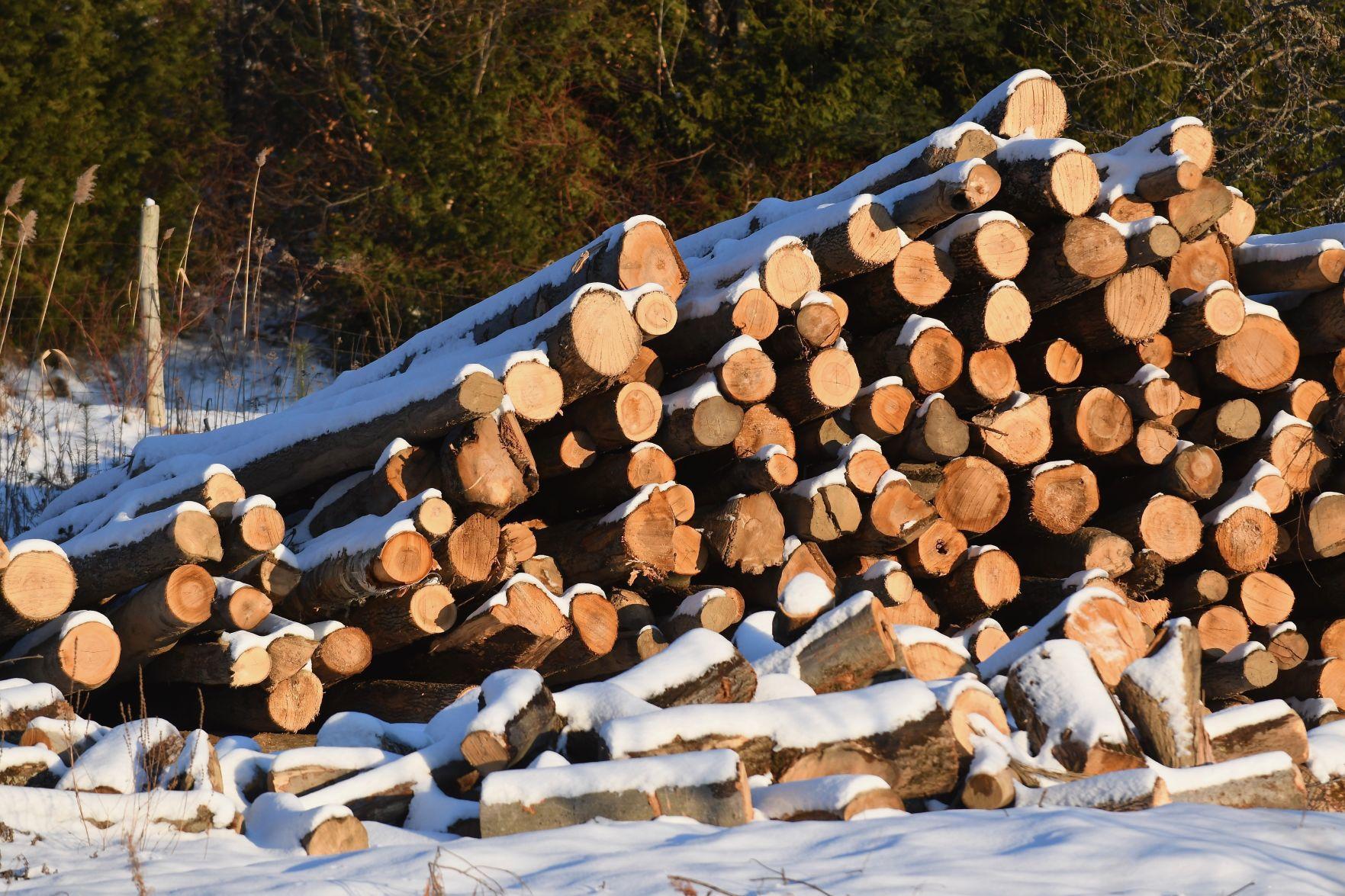 A pile of logs ready to be split into firewood shines in the late-afternoon sun recently along Route 3 in Proctor.

WALLINGFORD — The recreation director resigned from her post last week, as did several members of the Recreation Committee.

According to draft minutes of the Dec. 16 Select Board meeting, the board voted 4-1 to accept the resignations of Recreation Director Jamie Consolatti, along with recreation committee members Michelle Kenny, Bastian Auer and Eileen Tessier.

Selectman John McClallen was the sole “no” vote.

Kenny was chairwoman of the committee.

Kenny said Thursday she didn’t wish to comment on the particulars of her resignation, but said she’d work to help the town in other ways.

Attempts to reach the other resignees Thursday weren’t successful.

Selectwoman Rose Regula said in an interview Thursday that Consolatti’s resignation had to do with her not having time for the position along with her regular full-time employment. As for the others, she said it was expressed to the board that the recreation committee didn’t feel supported by the Select Board.

Regula said the board does support the Recreation Committee, but has to keep costs in mind. She said upgrades to the basketball courts had been a point of friction between the two entities.

Regula said all the resignations were sent to the board by letter except Tessier’s, who offered hers at the Dec. 16 meeting after a discussion.

The recreation director position was new this year, having been approved by voters in March. The job’s creation was backed by the Recreation Committee, which wanted it to be a full-time position, however it was budgeted for part-time.

Donald Reuther became the new CEO of Community Health on Dec. 2, succeeding the organization’s first and only other CEO, Grant Whitmer.

The largest network of providers of primary care, pediatric medical care and dental services in Rutland County has a new leader, who jointed the organization this month.

Donald Reuther became the new CEO of Community Health on Dec. 2, succeeding the organization’s first and only other CEO, Grant Whitmer.

“It has been moving in the right direction, but that being said, there’s always room for new ways to serve the patients. My focus will be on quality. Preventive medicine is the best way to keep health care costs (affordable) for all the patients. We will be working on our quality program and taking it from great to even greater,” he said.

“I’ve gotten to know the staff. My goal is that I know my staff on a first-name basis,” he said.

Reuther brings experience to Community Health, joining the health-care provider and federally qualified health center from Baltimore Medical System FQHC, where he was chief operating officer. He has worked with FQHCs for 17 years.

In a statement, Bob Hedden, chairman of Community Health’s board of directors, said Reuther’s “vast experience in all areas of FQHCs, finance and business, along with management and personnel skills” made him the right choice to lead Community Health.

In Baltimore, Reuther was responsible for the day-to-day operations of Maryland’s largest FQHC, which offered primary care, pharmacy, behavioral health and substance abuse service to more than 47,000 patients.

The change from Baltimore to Rutland has been “heaven,” according to Reuther.

“The quiet, the friendly, accommodating people, the beauty. It is the most diametrically opposed change you can imagine,” he said.

But while Reuther appreciates the beauty of his new home, he also understands the challenges of delivering quality health care in a rural setting. Before Baltimore, he worked in Colorado.

“What it takes to overcome those challenges is innovation and outreach and care coordination. One of the things that Community Health and its partners do best, we currently have over 3,000 (patients) in care coordination to manage their health care, to make sure they’re following their medical advice and that they’re engaged in their own health care,” Reuther said.

Reuther is only the second person to lead Community Health. He said in his time in Rutland, he has learned that Whitmer, who retired in March, was a “fabulous leader” who “made amazing strides in the growth of Community Health.”

Reuther said it was Whitmer’s vision that allowed Community Health to be in its current position serving 75% of the population of Rutland County.

“It’s a tough act to follow. I’m hoping we can continue in those steps by taking innovative approaches. One of my particular areas of passion is telemedicine. That is one way that we can serve the medical needs of patients in rural areas. It’s delivering health care to the patients where they are,” he said.

Telemedicine uses cameras that can broadcast a lot of visual information and monitors that can display that level of detail so patients who don’t have practical access to doctors can be seen by remote specialists.

He is expected to visit legislators in Montpelier on Jan. 27 along with some care providers to learn more about health care and the challenges involved in Vermont.

“We are the largest federally qualified health center in Vermont and New Hampshire, so our voice at the legislative level is very important. We will be there talking about how we expand care, how we attract providers, how we can get sustainable reimbursement to make sure that our patients are well cared for,” he said.

Reuther and his wife, Victoria, are new residents of Vermont, but Victoria knows the Rutland region after spending much of her youth at her family’s second home in Wallingford.

A naturalized American citizen had to leave his teenage daughter in Syria when he brought the rest of his family to the United States in 2012 at the onset of the Syrian civil war. He promised her he would bring her home. Mohammed Hafar had to sue the U.S. government to keep his promise. A2

The Redhawks, of Champlain Valley Union High School in Hinesburg, according to Herald sports writer Tom Haley, does little else but win, and this year, they have the look of a team that isn’t going to let anything stop them in recovering their Division I crown. B1