Savannah Crowther said she would like to feel a little safer walking around her new hometown.

Crowther, who identified herself as one of the people who relocated to Rutland through the “Stay to Stay” program went before the Board of Aldermen on Monday to ask the city to do more about pedestrian safety, particularly along Main Street. She said pedestrian safety should be a top concern if the city wants to see more economic growth.

“Almost every single one of us here this evening has children,” she said. “We do care about the safety of our community and our families.”

Crowther said she did not feel safe walking to Seward’s, costing the restaurant a customer. She also pointed to a series of fatalities, including the death of Carly Ferro in 2012 and the crash that shut down Main Street and killed a Pittsford woman last month.

“We’re not going to wait around for the next fatality ... before emphatically expressing our concern,” Crowther said. “We hope you don’t, either.”

Alderman Matt Whitcomb said Project VISION had been actively looking at pedestrian safety and said that if Crowther gave him her contact information, he would loop her in on those discussions. Whitcomb has previously described learning that one of the barriers to local people using public transportation was that they often felt unsafe getting to and from bus stops.

Also, Whitcomb proposed a motion Monday — approved unanimously by the board — to refer the issue to the Community and Economic Development Committee.

Alderman Thomas DePoy noted that there were not a lot of good places to cross Main Street, and stores along the road could be missing out on foot traffic because of it.

“I think it’s probably about that time, in that area as well as other parts of the city, to look at ways of getting safely across roads,” he said.

The board also voted to refer the issue to the planning commission. 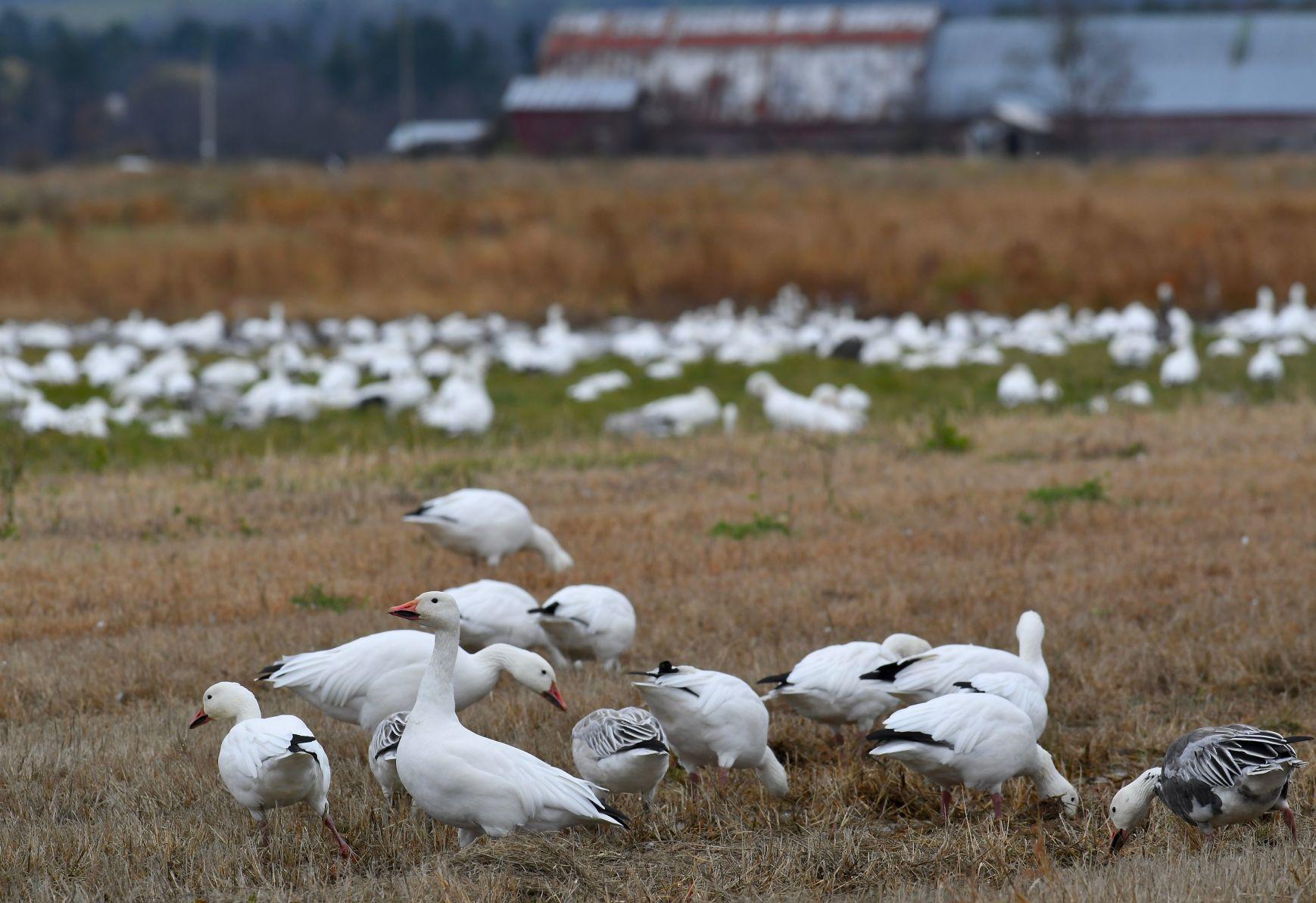 A flock of snow geese feed in a field at the Dead Creek Wildlife Management Area along Route 17 in Addison on Tuesday morning.

Law enforcement vehicles are parked at the CVS parking lot along Route 7 in Rutland as police respond to a stabbing incident Tuesday morning.

A local woman is being held without bail after police said she stabbed her boyfriend with a knife in the parking lot of the CVS Pharmacy on South Main Street in Rutland around 7:30 a.m. Tuesday

Tijanique Keyanna Reeves-Brown, 23, of Rutland, pleaded not guilty Tuesday in Rutland criminal court to a felony charge of first-degree aggravated domestic assault with a weapon.

The charges against Reeves-Brown were based on an affidavit written by Detective Emilio Rosario, of the Rutland City Police Department, who said police had responded to a report that a woman, later identified as Reeves-Brown, had stabbed a man and then fled the area.

Rosario said police were told the alleged victim was being treated at Rutland Regional Medical Center.

The officer followed the woman out of the hospital, to her car and to Crescent Street. The woman was seen going into 21 Crescent St. and moments later she was seen running through the backyard until she was stopped and detained by Officer Jimmy Plakas.

“I spoke with Reeves-Brown in the holding area of Rutland City Police Department. Reeves-Brown refused to speak with (me) about the situation. Reeves-Brown told me to either let her go or take her to jail,” Rosario wrote in the affidavit.

Ashe said the victim told him that he is from Albany, New York, and moved to Vermont about 10 months ago with Reeves-Brown, his girlfriend.

According to the victim, the alleged incident on Tuesday started because of long-time issues. He said he wanted to end the relationship but accused Reeves-Brown of trying to prevent him from leaving by following him around and taking his belongings.

“Keyanna yells and screams and makes it impossible for him to leave. They always get kicked out of different places they live because Keyanna screams and fights with everyone,” the victim told Ashe according to the affidavit.

He told police the situation was escalating and he asked someone in the area to call the police.

According to the victim, that was when Reeves-Brown swung at him with a knife. He said she missed the first time but then stabbed him in the left hip.

Police said the wound was a laceration about 1-inch long.

An order of protection for the victim against Reeves-Brown was issued in June when they were living in Glens Falls, New York. The order is in effect until December.

“(The victim) said he wasn’t afraid of Keyanna but he also doesn’t want to get stabbed again,” the affidavit said.

During Reeves-Brown’s arraignment, Ian Sullivan, chief deputy state’s attorney for Rutland County, asked Judge David Fenster to hold her without bail because she was being charged with a felony crime of violence.

Attorney Mark Furlan, who represented Reeves-Brown, said that while he acknowledged there appeared to be a protection order, although it was not easy to get the details because it is from another state, the affidavit seemed to indicate that the victim was choosing to have contact with Reeves-Brown.

Fenster, in explaining his decision to hold Reeves-Brown without bail, noted the alleged assault happened during the day and before multiple witnesses. He said those claims with the police, along with the existence of a protection order, indicated there were no conditions that could be set by the court that would guarantee the victim’s safety.

If convicted of the charge against her, Reeves-Brown could be sentenced to up to 15 years in jail.

PROCTOR — After hearing the town wasn’t wholly satisfied with its police coverage, to the point where it was speaking to Pittsford about sharing an officer and equipment, Rutland County Sheriff Stephen Benard met with the Select Board attempting to clear the air.

Benard told the board Oct. 28 that he has watched two meetings in Pittsford and Proctor that were recorded by PEG-TV regarding police coverage in Proctor.

“I guess the first comment I’d like to make is, I think at the first meeting I came to with this board, I gave everybody my business card with my cellphone number on the back,” said Benard. “I’ll repeat the request, if you have any issue, any issue, call my cellphone 24/7 because I’m there. I can answer the issue or I can help with the issue.”

Proctor has a contract with the sheriff’s department for 40 hours per week of police coverage. Members of the Proctor Select Board met with the Pittsford Select Board in October to open discussions about possibly sharing police services. It was agreed each board would establish a committee to identify needs and capabilities, then the two towns would see what they might do for each other.

Benard said he thinks there might be some confusion on the Proctor board about the type of contract the town has.

“The contract for the town of Proctor and West Rutland is a combined patrol contract,” he said. “So that means each town pays essentially for a 40 hour per week position, but you effectively get 80 hours of a week of coverage. You get 40 hours a week where there’s a car actually in town, but during that other 40 hours the officer is working in West Rutland and there’s a call in Proctor, he responds to take care of it.”

The same holds true if a deputy is in Proctor, and there’s a call from West Rutland, he said.

“It’s hard to get exactly 40 hours a week in each town, but we balance those hours out,” he said. “It’s a continuing, fluid process. We may have a two-week period where the town of West Rutland is short 10 hours because of things going on here. Vice versa we may have that in Proctor. We balance that out over time by telling our guys you need to go here, you need to go there.”

He said he’s happy to meet with the board or its agents and work out whatever kind of contract the board wants. He went on to explain how the department handles the serving of restraining orders and monitors truck traffic.

Selectwoman Carrie Dougherty said Benard had been told about some of these issues in the past, and said they hadn’t been addressed until now.

Benard said he believes some of the concerns stem from deputies needing to write clearer log reports. He said he himself sometimes doesn’t write a report when he handles an issue in town and doesn’t bill for it.

He suggested the board appoint one of its members to act as a liaison to his department. That would streamline the flow of information, give the board direct contact with patrolling deputies, and cut down on confusion and mixed messages.