Rep. Larry Cupoli, R-Rutland City, said he is not sure the state will make it through the coming legislative session without a tax hike.

“Spending is going to be a tough one,” he said. “We haven’t raised taxes in some time. ... I think, at some point, that might have to happen. If not, spending will have to be curtailed.”

However, Cupoli said curtailing spending might be easier said than done, and he wasn’t sure where to find cuts.

“If there’s waste, we have to find it,” he said. “If not, we have to support our communities and our society.”

The budget was a common theme among members of the Rutland County delegation who were contacted this week and asked about their priorities for the 2020 legislative session, but it won’t be the only subject our representatives are tackling.

Cupoli said he intends to explore some education issues.

“I’ve got a bill going in for testing kindergartners through grade three for dyslexia and issues like that so we can catch early some of these deficiencies that might not let kids perform well,” he said.

Rep. Robert Helm, R-Fair Haven, said his priority was keeping the budget affordable, but he has “a bunch of little stuff” he hopes to attend to.

“I’ve got old cemeteries, Route 4 signs, constituent work,” he said. “I’m not looking to conquer the world. ... All I want to do is keep the state of Vermont spending no more than they are now and on an even keel. ... I think we can pay our bills, but we can’t expand our government any more than that. We can hold even if we don’t want to start any new programs.”

Rep. Tom Terenzini, R-Rutland Town, also said his focus would be on affordability.

“Stuff like a carbon tax I certainly wouldn’t be one to approve,” he said. “I’d have to look long and hard at stuff like minimum wage and family leave to see what the impact would be on businesses in the state.”

Terenzini said he will oppose any new gun laws.

“I have one bill that a constituent would like to see,” he said. “People that are out at night, walking around, they have some type of vest with something fluorescent on it, or requiring people to have some sort of light, like a headlight or whatever.”

Rep. William Notte, D-Rutland City, said that since he is still in his first term, and he expects the second half of the biennium to be different from the first, his priority remains making sure he understands the rules and procedures.

“It’s a very different world from the Board of Aldermen — so easy to make missteps,” he said. “It’s 80% policy and procedure and 20% unwritten rules.”

Notte said he planned to support paid family leave, which he expects to come up early in the session.

“I think that will make Vermont attractive to the young professionals we’re hoping to retain or lure to the state,” he said. “I was disappointed that fell by the wayside last year.”

Notte opposed last year’s bill to increase the minimum wage, but said he can get behind the new version coming before the House, which would see increases of $1 an hour in each of the next two years.

“Climate change is an obvious issue that is important to us and we should be thinking about it,” said Rep. David Potter, D-Clarendon. “A lot of balls are up in the air.”

Potter said that 43% of greenhouse gases come from transportation, but that’s a hard area to tackle in a rural state.

“We did an incentive with electric cars, and I expect we’ll be working more on that,” he said.

Potter also wants to expand Vermont’s seat belt law to allow police to pull drivers over solely for not wearing a seat belt.

“I think we can save a few lives with that,” he said. “Over half the fatalities have been unbelted, and it’s shown in other states with primary seat belt legislation, you get a bump of 4 or 5%.”

He said a bill to that effect passes the House every year, but they always die in the Senate.

Rep. Butch Shaw, R-Pittsford, expects prison reform to be at the top of his to-do list, and he said responses to the recent issues at the facilities in Chittenden County and Newport must not be limited to those locations.

“We need to take a holistic look and the entire corrections system and see how we can do better,” he said. “We’ll take testimony on the first day.”

Shaw said the Legislature is also working to bring the 270 inmates the Vermont Department of Corrections has sent to out-of-state prisons back to serve their time within our borders. Beyond that, he expects to see renewed discussions of a tax-and-regulate scheme for marijuana.

“I want to make sure that if we move forward on what I call ‘seed to sale’ that it doesn’t put pressure on the general fund budget to run the program,” he said.

Over in the Senate, Sen. Brian Collamore, R-Rutland County, said he intends to introduce a bill that would push back implementation of the “3-acre rule” on stormwater mitigation, scheduled to take effect this summer, by two years.

“That will give us a chance to check the capacity of Vermont engineers to do the studies necessary,” he said. “It will allow the Agency of Natural Resources to make sure they have the capacity to process these permits and it will clarify where the money is for mitigation and how much there will be of that funding.”

Collamore noted that the timeline on the regulation was a product of the agency’s rule-making process and not the Legislature.

“I just think we need to put the brakes on this and look at how it’s going to work,” he said. 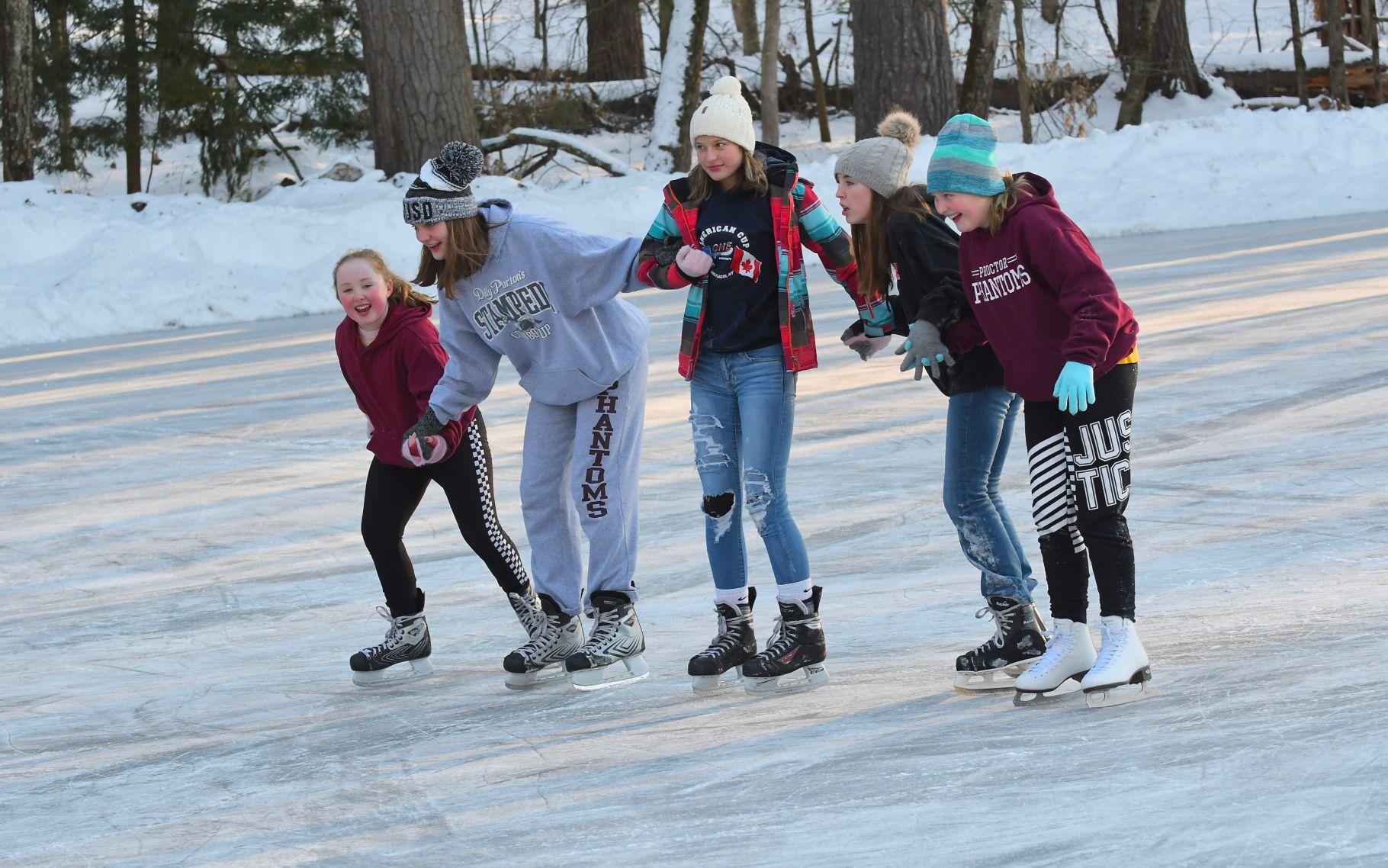 Skaters enjoy the first day of the Proctor skating rink Friday afternoon. From left ro right are: Reagan Phelps, 11, Sarah Cook, 13, Mallee Richardson, 12, Olivia Cole-Bugay, 13, and Zoe Reynolds, 12. The rink is open weather permitting on weekdays from 3:30-9 p.m. and on weekends from noon-9 p.m. During school weeks the rink is open noon-9 p.m.

MONTPELIER — Legislative leaders have laid out their plan for the upcoming session, including potentially passing a bill for a tax-and-regulate system for recreational marijuana and moving forward with an increase in the minimum wage and paid family leave.

Speaker of the House Mitzi Johnson, D-Grand Isle-Chittenden, and Senate President Pro Tem Tim Ashe, D/P-Chittenden, held a news conference Thursday at the State House outlining their agendas before the session starts up next month.

Johnson said she expects bills involving raising the state’s minimum wage to $15 per hour and mandatory paid family leave for workers to move quickly at the start of the session.

“It’s really what Vermonters need in order to have an economy that works for everybody not just those that can afford it,” she said.

But Gov. Phil Scott opposes those initiatives. The Republican governor sat down with Steven Pappas, editor and publisher of the Times Argus and Rutland Herald, last week and talked about minimum wage and paid family leave.

“If a higher minimum wage was a tool that attracted more people to a state, we have one of the highest now, and it obviously isn’t working. We have New Hampshire, right across the river, they’re at $7.25 (per hour) and their economy is doing quite well. It would leave me to believe that isn’t the answer,” he said.

“But right now, to have a payroll tax that’s going to raise $25 million to $80 million to me just doesn’t make sense right now,” he said.

Ashe said at Thursday’s news conference both the House and Senate don’t think a voluntary program would work.

For marijuana, Johnson said the House will continue to work on the bill that passed the Senate last session. She said she had concerns about the legislation that need to be addressed, such as children using marijuana, highway safety and environmental issues.

“But given what I’ve heard from people, I believe there is a solid tri-party majority in the house that would like to see tax-and-regulate pass this year,” she said.

Scott said in his interview last week he’s OK with moving forward with a tax-and-regulate system. But he said he won’t sign the bill unless it includes roadside saliva testing, more money upfront for education and an opt-in for municipalities that want retail marijuana shops in their towns.

Last session Scott vetoed a bill that would have called for a 24-hour waiting period for those looking to buy a handgun. Ashe said it doesn’t look as if the votes are there to override the veto and there are no plans at the moment to call such a vote.

“But that doesn’t mean we aren’t committed to moving forward on gun-safety legislation,” he said.

Ashe said there are other things the Legislature can do, such as making upgrades to extreme risk protection orders. Also, he talked about closing the so-called “Charleston loophole” which allows a gun dealer to transfer a gun to someone before a background check is complete. The loophole got its name because it was used by Dylann Roof, who got a gun and killed nine people at a church in Charleston, South Carolina, in 2015 despite not being permitted to have a gun because of his arrest record.

Johnson and Ashe said they will also look at legislation to modernize Act 250 and a potential ban on flavored vaping products.

An evangelical magazine founded by the late Rev. Billy Graham came under tweet fire when President Donald Trump took issue with an editorial published in Christianity Today arguing that he should be removed from office because of his “blackened moral record.” A12

Snowmaking is shown at dusk in Killington recently.

The state’s ski association has played a major role in the industry over the last 50 years. B4

With the benefit of eggnog, hot cocoa becomes an extra-thick, velvety and luxurious version of itself.

With the benefit of eggnog, hot cocoa becomes an extra thick, velvety and luxurious version of itself, especially with a royal hint of nutmeg. C2

The Green Mountain Mahler Festival Orchestra and Chorus, conducted by Daniel Bruce, will perform Beethoven’s Ninth Symphony Dec. 28 at the Spruce Peak Performing Arts Center in Stowe and New Year’s Day at the Elley-Long Music Center in Colchester. Pictured is the 2012 performance in Colchester.

Musicians and community celebrate the new year with the famous “Ode to Joy.” D1