Organizers say a temporary reconfiguration of Center Street has been a big hit, and the city is looking at a grant to study a more permanent redesign.

The Community and Economic Development Committee voted unanimously Thursday to recommend that the Board of Aldermen apply for a $30,000 Agency of Transportation grant to study permanently changing the street.

Since early July, temporary structures have been in place narrowing the street, expanding the sidewalks and creating “parklets” — spaces allowing downtown restaurants to offer outside dining. The change was made partly to see how some of the ideas discussed in the rewrite of the downtown master plan might work and partly to help restaurants replace seating capacity lost to the COVID-19 pandemic.

“Aesthetically, I think the looks came out even better than I had even hoped,” Rutland Redevelopment Authority Executive Director Brennan Duffy told the committee. “Our trees have survived. Those have, I guess, been living in a fairly tough environment for a tree, but they seem to have made it.”

Those trees are going to be transplanted into convenient spots of ground by the city forester, Duffy said, and the RRA and Downtown Rutland Partnership are working with the city departments on preparations to break down and store the temporary infrastructure for the winter.

“We can’t keep those up during the winter,” Duffy said of the dividers. “They affect snow removal and will have to come out.”

Alderman Sam Gorruso said he has eaten meals downtown a lot this year and the reconfiguration was a “grand slam.”

“You made everybody happy while still providing flow for traffic and parking,” he said.

“It’s kind of a lot for that street,” he said. “I think a lot of that traffic is cut-through traffic where they’re not trying to access businesses on that street, but they’re using it to get to Route 7 or residential areas on the other side.”

Neary said this was neither good nor bad, but if the city wants to make Center Street more pedestrian-friendly, it needs to discourage through-traffic.

Neary said an online survey found overwhelmingly positive attitudes toward the redesign, with only “a handful” of negative comments. He said the survey also showed more than 60% support for closing Center Street to vehicular traffic and making it pedestrian only, similar to Church Street in Burlington. Gorruso noted that this was an oft-raised topic, and while he likes the idea, Rutland lacks the features of Burlington that make Church Street what it is — though he said it might be feasible “someday.”

Duffy said the grant will allow the city to study potential designs for narrow streets and wider sidewalks with two-way, one-way and no vehicular traffic, and additional grants would be available for next steps in early 2021. Neary said the way the city has been carrying out planning for the redesign will make it easier to get funding if it decides to pursue reconstruction. 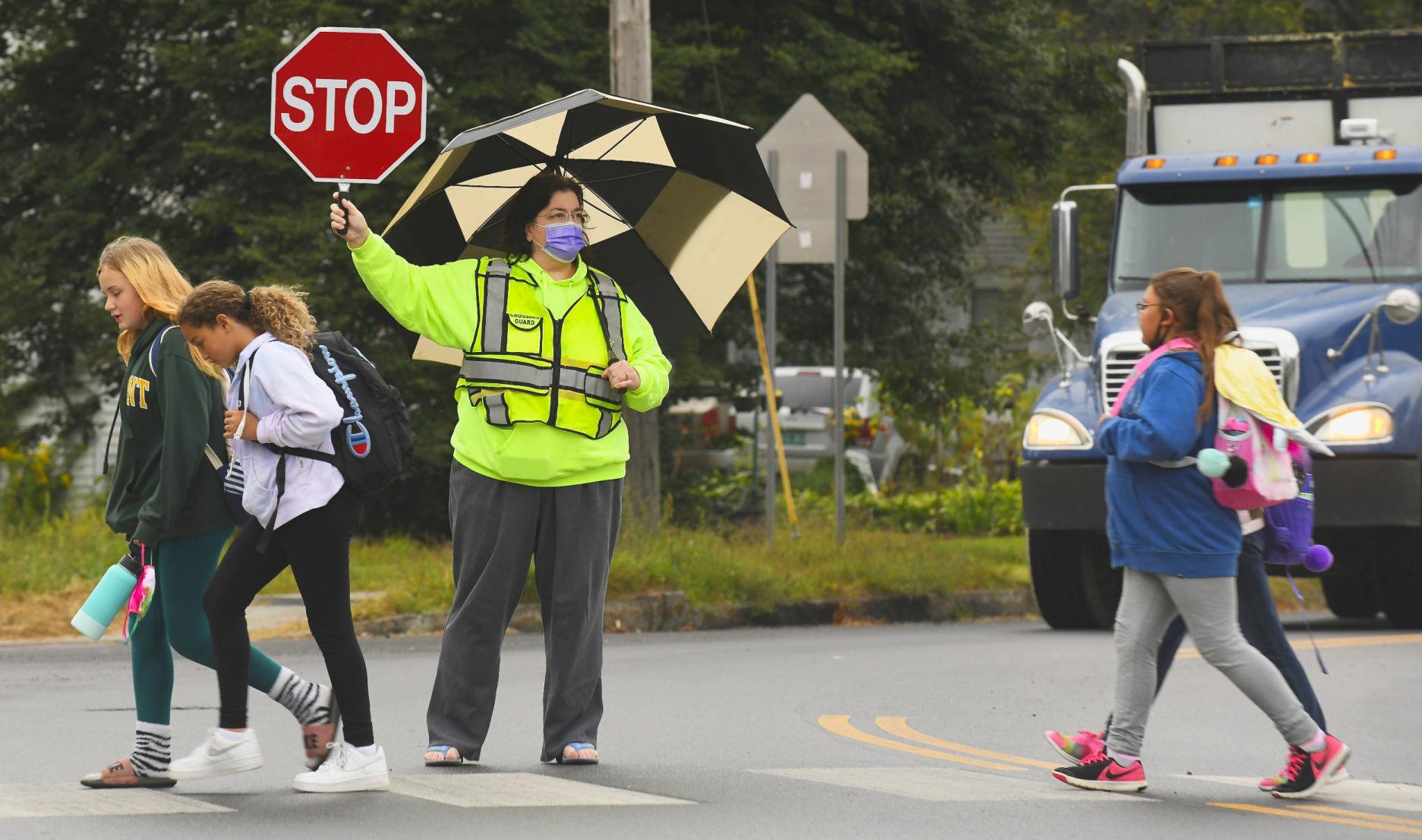 Crossing Guard Vicki Shaddock guides a group of Fair Haven Grade School students cross at the corner of Washington Street and Park Place on Thursday afternoon. Shaddock is starting her 20th year as a crossing guard this year.

MONTPELIER — Public Safety Commissioner Michael Schirling has overruled a Vermont State Police transparency policy and is now blocking state troopers from releasing names of juveniles in any kind of cases — including drivers accused of causing serious car crashes and in instances where young people are the victims of homicides, fatal or serious vehicle wrecks, drownings and other incidents.

The directive from Schirling came one day after the Vermont State Police followed its own longstanding policy to identify a 16-year-old driver from Atlanta, Georgia, who troopers say crossed the center line on Route 7 in Charlotte and killed an elderly Ferrisburgh couple last week.

“At the direction of the commissioner, please put a temporary hold on releasing any personal identifying information on juveniles,” State Police Director Col. Matthew Birmingham wrote in an email to troopers at 9:53 p.m. last Friday.

“The only exception to this temporary hold is if a juvenile has been charged with a crime as an adult,” Birmingham’s message continued.

By Thursday, Schirling appeared to modify his directive slightly. When asked about his temporary order blocking the release of cases involving AMBER Alerts, abductions or lost children, Schirling said he would make incidents involving the safety of children an exception to the new directive.

He said the Legislature may need to weigh in, but that is not likely to happen until next year. The legislators are still holding virtual sessions, but trying to wrap up the marathon session.

As of Thursday, it was unclear whether the teen driver, Isabel Jennifer Seward, would face any charges in adult or family court related to the double fatal crash. Seward was believed to be visiting Vermont relatives and was listed as a student at Paideia High School, a private institution, where she plays basketball and volleyball, records show.

Seward was northbound on Route 7, which has two lanes, when her car crossed the center line and struck the car carrying the couple head-on near the breakdown lane of the one southbound lane, police said. Seward was driving a Vermont-registered 2009 Toyota Tacoma.

He said lawyers within the Vermont Agency of Transportation, the Department for Children and Families and the Vermont Attorney General’s Office are being asked to weigh in. Schirling said his department’s own legal counsel, Rosemary Gretkowski, is weighing in as well.

Birmingham’s message to state troopers stated his department was reaching out to Attorney General T.J. Donovan for a legal ruling. Birmingham wrote that a “swift and full review” of the matter was being requested. “Until that is complete, this temporary hold is in effect,” Birmingham wrote.

State Rep. Martin Lalonde, D-South Burlington, who sits on the House Judiciary Committee, said when the juvenile laws were changed this year, it focused on Family Court proceedings and confidentiality at hearings. The Judiciary Committee never addressed public records such as accident reports and civil traffic tickets, he said, and that would not be part of the review by his committee, said Lalonde, a lawyer.

The Vermont Motor Vehicle Department plans to continue to release names of all involved parties, no matter their age, through public crash reports, said Tony Facos, the head of enforcement, on Thursday.

“Our policy has not changed,” said Facos, a former Montpelier police chief. He said the DMV had a full legal review conducted, and the issue discussed at length last week. Transparency will remain, he said.

The same also goes for civil traffic tickets that are issued to teen drivers and mentioned in reports, he said.

Three years ago, then-Public Safety Commissioner Thomas Anderson, who previously served Vermont as U.S. attorney, did his own legal research on the question of identifying juvenile drivers through public records. Anderson’s review followed shortly after the department issued a new public transparency policy, which had been endorsed by the office of Gov. Phil Scott. Anderson came down on the side of the public’s right to know.

The issue in this case boils down to whether names of licensed drivers who crash on public roads paid for by taxpayers that result in publicly funded police, fire and rescue squads responding are public information.

While juvenile court proceedings are considered confidential, 16-year-olds are eligible to appear in adult criminal court, but a new law limits the kinds of cases teens can go to adult court.

Also, the Legislature has moved to allow offenders up to age 22 to be treated as youthful offenders with confidential court hearings.

Chittenden County State’s Attorney Sarah George told the media in an email last week that she would not release the driver’s name from the Charlotte crash. George did say if she filed charges against the teen, she planned to bring them in Vermont Family Court, where all proceedings are confidential.

State Police had granted a request by George’s office to withhold the name of the driver initially. Two days later, state police agreed to release Seward’s name after various appeals from the public noting the name is public under the Vermont Constitution, the Vermont Public Records Law, the rules of the Vermont DMV and the current Vermont State Police public information policy.

The same issued surfaced in another crash involving a teen driver in May 2019, killing a schoolmate and injuring another in Windham County. The driver’s name was withheld for 17 days, but State Police released it and further updated its transparency policy. 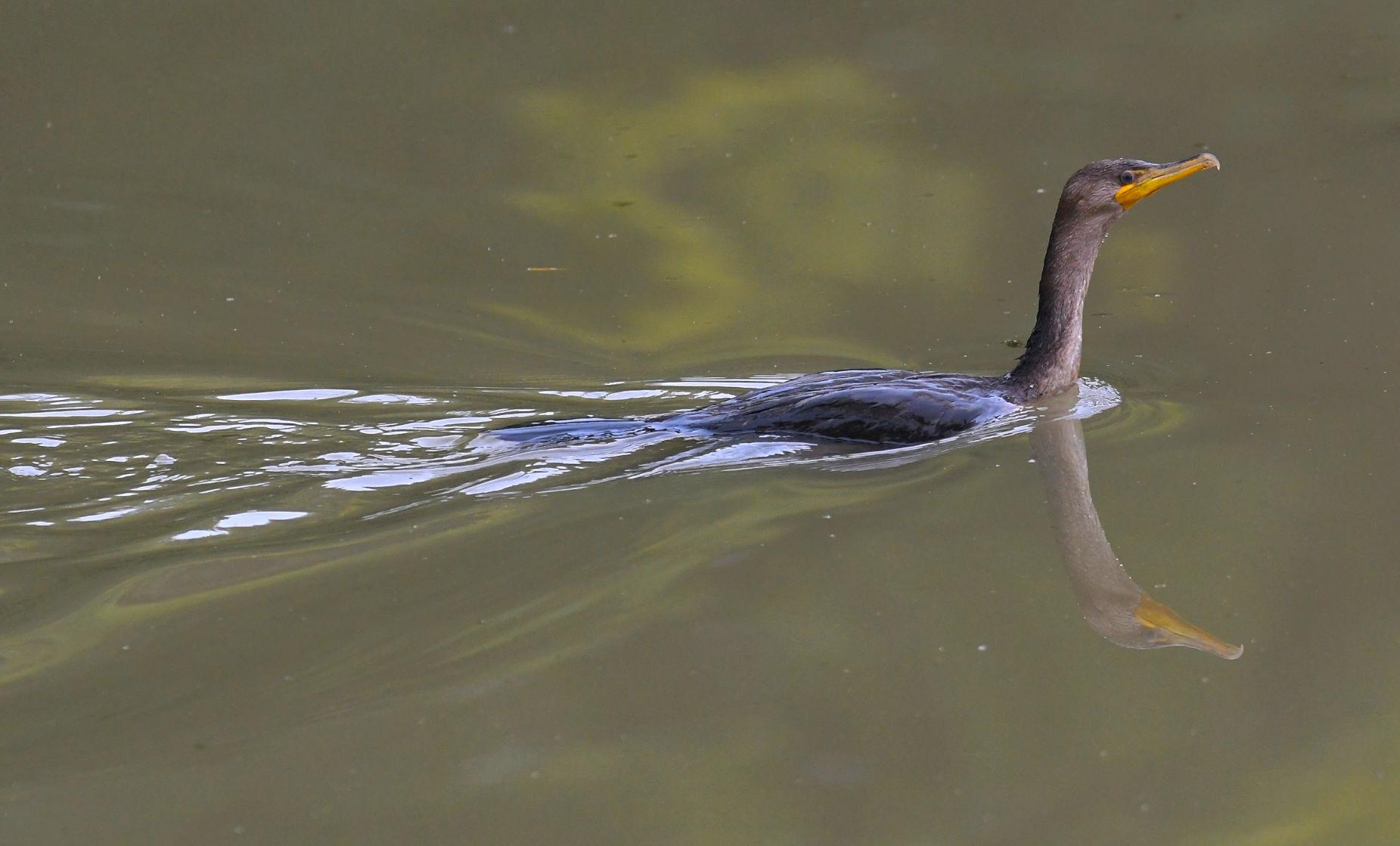 A double-crested cormorant wades in the Lake Champlain shallows on Thursday morning in West Addison. These prolific and controversial birds are considered by many fishermen to be a “nuisance” species, consuming up to a pound of small fish per day.

A federal judge has thrown out a lawsuit seeking to stop Vermont’s efforts at mail-in voting.

In a ruling issued Wednesday, Judge Geoffrey Crawford denied a motion for preliminary injunction and granted a motion to dismiss the lawsuit, which was brought by five Vermont residents who claimed Secretary of State James Condos’ efforts at universal mail-in voting violated their Constitutional rights.

Crawford found that the plaintiffs lacked standing to bring the lawsuit.

“The plaintiff’s case begins and ends with the issue of standing,” Crawford wrote. “This is a constitutional requirement, which operates as a check on the ability of litigants to file claims for injuries which are insufficiently specific and direct in their effect on the plaintiff. ... Cases in which plaintiffs assert ‘generalized grievances’ of unlawful government action are commonly dismissed on standing grounds.”

Crawford wrote that plaintiffs must show an injury that is “actual or imminent, not conjectural or hypothetical” and the only claim they had brought was “theoretical.” Also, he ruled the plaintiffs were not specifically affected by the change in a manner different from any other voter.

Crawford rejected an argument made at a hearing Tuesday that the procedures that would allow them to vote even if their mail-in ballot was sent to the wrong place were difficult enough that it might deprive the plaintiffs of their right to vote. The ruling said that because the lawsuit was not a class action, he had to consider how likely that was to apply to the plaintiffs, who included a sitting town clerk as well as current and former members of the Legislature.

“These are sophisticated voters who have gone to considerable lengths to obtain counsel skilled in election law and to file a lawsuit in federal court,” Crawford wrote. “Of all people likely to be confused about how to vote, these five plaintiffs must be last on the list. The court will not enjoin a statewide mailing because one or more of these plaintiffs may be confused by the non-receipt of a separate mailing last month in connection with the primary election.”

Since Murano, Italy, is so far away and your American passport won’t work there anyway on account of the pandemic and all, you can always visit Seattle and take in the awesome Glass Experience in mid-October, after the smoke clears. Read all about it on this week’s Travel page. B6

In 5 years since the Supreme Court made it the law of the land, same-sex marriage is more widely embraced than ever. A8