Local
Tempers flare as "Raiders" discussion resumes at school board

The reorganizational meeting of the Rutland City School Board descended into shouting Tuesday after one of the board’s new members made a motion to immediately restore the Raider nickname and arrowhead logo.

Board member Hurley Cavacas became chairman at the top of the meeting, ousting incumbent Alison Notte by a 6-5 vote. Erin Shimp bested Ann Dages for secretary by a similar margin — Assistant Superintendent Robert Bliss said he was missing one vote but Shimp had the six she needed without it. The board heard presentations on various anti-discrimination efforts and other activities before Cavacas recognized Board Member Stephanie Stoodley, who made the motion that touched off the shouting.

Stoodley said a vote to adopt the new “Ravens” team name had not been done under proper parliamentary procedure, that the Ravens name was being “pre-emptively used” and that evidence presented regarding the name change was “skewed.”

“The community at large has spoken and wishes for the Raider name and arrowhead logo to be restored,” she said, moving to do so effective that night and to have all materials related to the change made available to the board for review.

The board narrowly voted to abandon the Raider name and arrowhead logo — which were replacements for the “Red Raiders” team name and Indigenous American tribal chief logo the school used previously — in response to concerns from students and alumni that they were culturally insensitive. The move triggered a fierce backlash, and Stoodley was part of a slate of candidates opposed to the change, who successfully ran for School Board seats in March.

“I’m a little concerned,” board member Kevin Kiefaber said. “If the process that was done before was not thorough enough, then voting on this tonight would be even worse than what we did last time. ... If we’re going to consider it, I think we should take more time and do it right.”

Cavacas said he took this as a temporary restoration of the name while the process was examined.

“I think five of us were blindsided by a very well-orchestrated movement last March,” Cavacas said.

Notte raised a point of order, saying the subject was not on the agenda as an action item, and a two-thirds vote of the board was needed to act on the meeting that night. Tempers began to flare from there and board members began to talk over one another, with Cavacas saying that process was not followed at previous meetings and Notte saying Cavacas should call a recess and consult Robert’s Rules of Order.

“Miss Notte, I will certainly do it, and I will treat you much better than you treated me,” Cavacas said.

Discussion when the board returned from recess was full of raised voices and members talking over each other, primarily Notte on one side and Cavacas and Shimp on the other as proper procedure was argued.

“The law’s the law, honey,” Shimp said at one point to Notte after holding up a copy of Robert’s Rules and saying she could not find the rules Notte referenced.

At another point, Cavacas talked over Notte while promising he would not mute her as she did to him at a previous meeting, an accusation she denied.

Eventually, Cavacas ruled that he would put off the vote on Stoodley’s motion until the next meeting, at which it would be a warned action item, and he intended to invalidate the vote adopting the “Ravens” team name after consulting with school district attorney William Meub.

After that, the board went into executive session, came out and voted to authorize the superintendent to proceed with negotiations discussed in the session and then adjourned.

The next board meeting is scheduled for May 11. 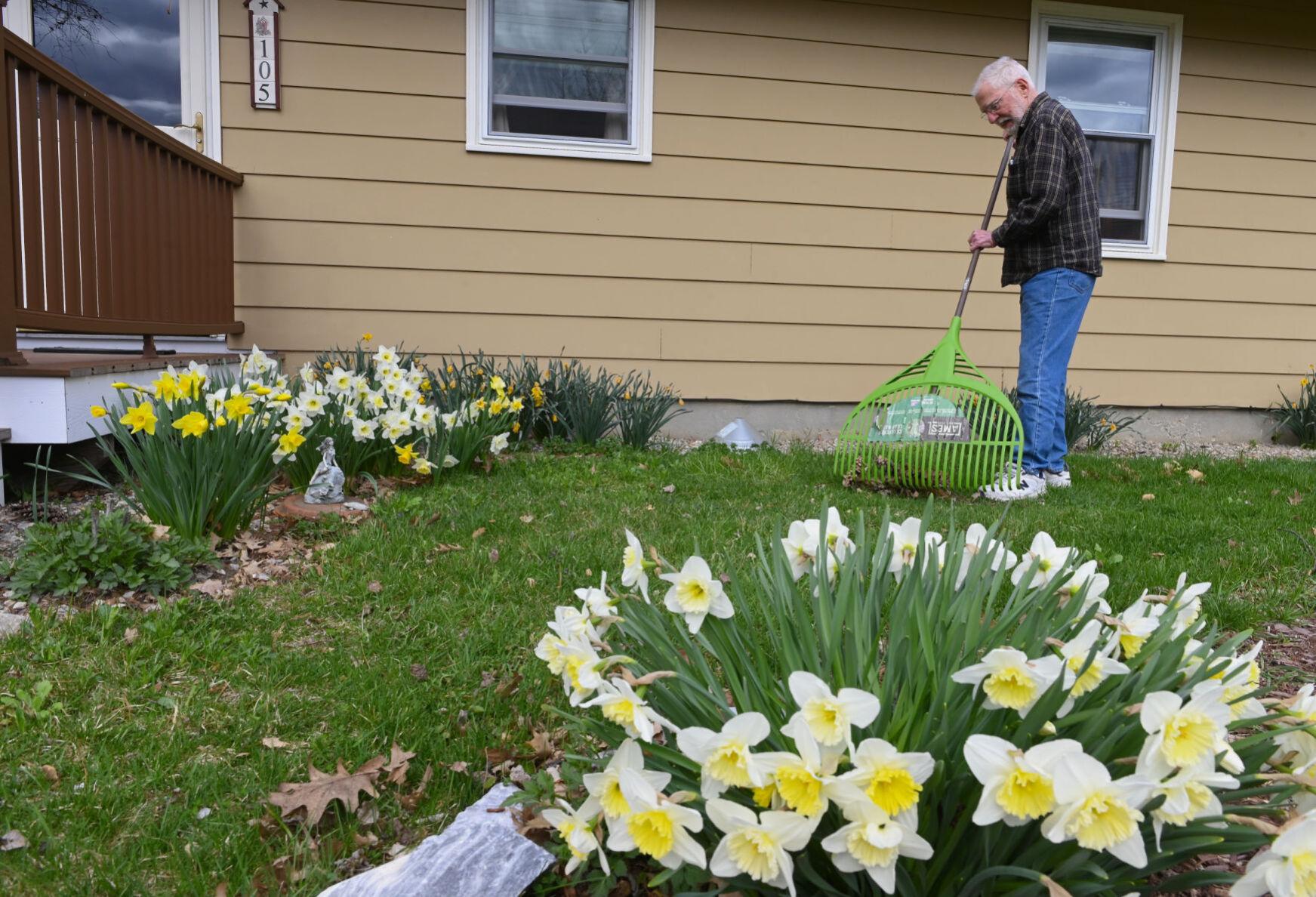 Larry Booker rakes his yard in Pittsford on Tuesday afternoon as clusters of daffodils bloom nearby.

MONTPELIER — State officials say appointments for the Johnson & Johnson coronavirus vaccine have been canceled for the week after six people in the United States developed blood clots out of nearly 7 million doses administered.

Gov. Phil Scott’s regular Tuesday news conference was delayed an hour so senior members of his administration could sit in on a call with other governors and the White House about the pandemic response. One of the main focuses of that call was the recent announcement that six women had developed blood clots after receiving the single-dose vaccine.

Scott said the Centers for Disease Control and Prevention (CDC) and the Food and Drug Administration (FDA) have recommended pausing the use of that vaccine. He said this recommendation “was made out of an abundance of caution due to extremely rare blood clots found in six cases out of the 6.8 million people who have been vaccinated with Johnson & Johnson.”

He said the vaccine, for the most part, has been shown to be safe and effective. The governor received that vaccine last week, and he said he was happy to get it.

He said federal agencies will meet and discuss what recommendations should be given to vaccine providers. Health experts are investigating the six cases to get to the bottom of the blood-clotting issue.

“They emphasized these incidents are extremely rare and this pause is likely to be a matter of days, not weeks,” Scott said.

Mike Smith, secretary of the state Agency of Human Services, said about 2,000 vaccine appointments had to be canceled Tuesday because they involved the Johnson & Johnson vaccine. Smith said about another 2,000 appointments through the end of the week have also been canceled. He said those that signed up for that vaccine will be offered the alternative vaccines from Pfizer and Moderna which require two shots, weeks apart, for maximum efficacy. He said residents can opt to wait and get the Johnson & Johnson vaccine once the pause is lifted.

“Right now, it is too early to assess what impact this will have on our longer-term vaccination strategy,” he said.

The governor and President Joe Biden have chosen July 4 as the day they want to get things back to as close to normal as possible, but that timeline depended on vaccine supply.

Health Commissioner Dr. Mark Levine said this blood clotting issue has been found in about one in 1 million people. Levine compared that to the chances of dying from the coronavirus which he said is about one in 500.

He said the six cases are all women, ranging in age from 16 to 48. He said their symptoms began six to 13 days after receiving the vaccine.

Levine said all of the symptoms reported by Vermonters who received the Johnson & Johnson vaccine have so far been benign or not serious.

“We have not seen any of these cases of blood clots in Vermont,” he said.

According to the state’s vaccine dashboard, nearly 49% of the state’s eligible population has received at least one dose of one of the vaccines. Nearly 32% have been fully vaccinated.

Those 30 years old and older were allowed to sign up for vaccine appointments Monday. Smith said over 15,000 people in that group have signed up.

There was nobody to carve the brisket at Mama T’s on Saturday.

The barbecue counter in the back of the Mobil Station on Route 4 has been serving take-out, but closed temporarily during the weekend as result of a lack of staff. It’s not alone. Cilantro in Manchester posted a sign blaming a temporary closure on the same issue during the weekend, and even some eateries managing to stay open are reporting difficulty getting staff.

“I’ve been looking for people for at least a month and nobody’s even applying,” said Todd Smith, manager of the Little Caesar’s in Rutland. “We literally get one application a month, I think.”

Smith said he also runs a food truck in Clarendon that he hasn’t opened because he can’t find help. At Little Caesar’s, he said he needs at least three full-time workers, including a manager and two part-timers. He said the positions, other than manager, pay minimum wage.

“Even if I wanted to pay $20 an hour, I couldn’t find anybody,” he said. “I feel like they’re just riding it out until July or whenever unemployment ends and then they’ll jump back on the workforce.”

Lyle Jepson, executive director of Chamber and Economic Development of the Rutland Region (CEDRR), said he has had a number of calls from businesses in the same boat, particularly in the retail and food service sectors.

“There is certainly a question out there about unemployment due to the increase in payments,” Jepson said. “I don’t know if we created a problem ... because we were doing the right things during COVID.”

“The 20-somethings who tend to hold those jobs are not vaccinated yet, but they will be soon,” Jepson said. “If I were in that demographic, I would certainly want to wait until I was vaccinated.”

Matthew Barewicz, the economic and labor market information director for the Vermont Department of Labor, said while the state tracks the number of filled jobs in a given sector, it does not track open positions, so they cannot tell whether a reduction is because of jobs being eliminated or positions remaining vacant. With that in mind, he said Vermont had 27,600 fewer jobs in February 2021 than in February 2020. The single biggest drop — 10,600 jobs — occured in the accommodation and food service sector. That number represents a third of the jobs in that industry.

Barewicz cautioned against blaming any specific factor for the inability of businesses to find workers. He said it can come down to factors such as how well the employer is keeping employees safe and whether there is flexibility for workers whose children are going to school remotely.

“The conversations on the micro-level for individuals and individual households are very real,” he said.

Also, Barewicz said while the service industry seems to have the widest gap, it doesn’t have the only one. He said the department is hearing manufacturers and construction companies are looking for employees, too — particularly the latter as they gear up for the construction season.

“There’s a lot of jobs out there, and if someone’s in a position to take advantage of this, it’s a great opportunity,” he said. “It’s almost like getting in on the ground floor. If we’re assuming the economy is going to grow and come back, the people who are getting hired now are going to be in a position to advance.” 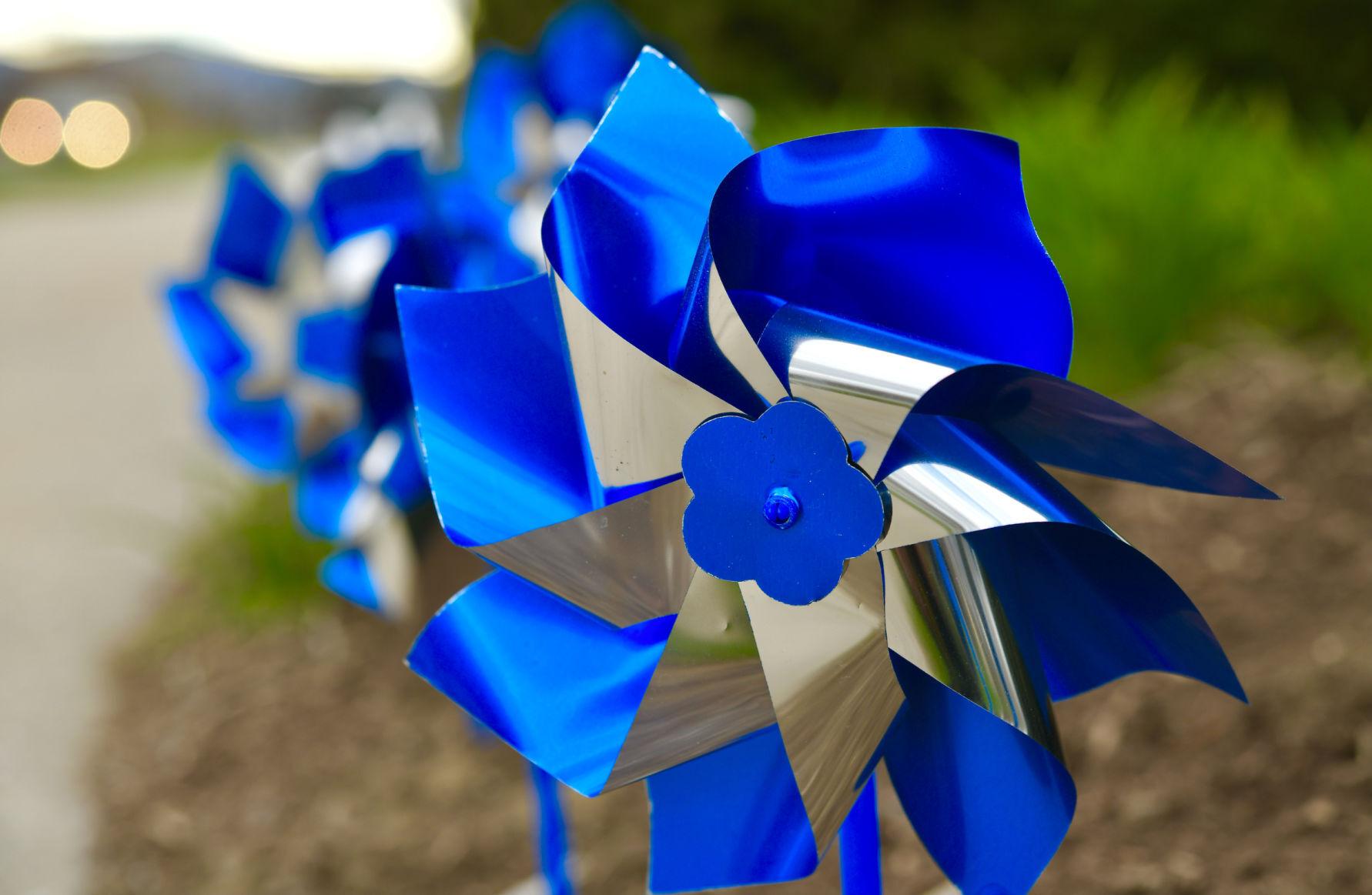 Local track and field teams are putting in preparation for the upcoming 2021 season. B1

Planting that first handful of peas in a bare, brown field can be a lonely experience. It’s the feeling of being slightly early to the party. B6