A screen capture from one of the prize-winning videos depicts the struggle of a young man tempted by and ultimately resisting the lure of drugs.

A collaboration between Stafford Technical Center and Rutland Pharmacy has resulted in the creation of three anti-drug video public service announcements to be aired by WCAX and PEG-TV.

The PSAs include one created by Andrew Martell, 17, of Fair Haven Union High School. In the video, the character played by Martell is tempted to use opioids but ultimately ends up “turning away and putting them down,” he explained.

“I came up with this idea because I know a few friends that had been bullied a lot of their lives and had a lot of mental problems. They turned to opioids because they thought they would be like (anti-depressant) drugs. A good fix, right? Well, obviously, that’s not the answer, and that’s the message I wanted to convey,” said Martell whose PSA won third prize.

At a Project VISION meeting on Thursday, Emily Marchinkowski, an administrative assistant at the pharmacy, said the business had a grant from the Vermont Department of Health that could be used to respond to the problem of opioid abuse.

This year, the third year of the grant, the Rutland Pharmacy staff decided to sponsor a community campaign with 30-second video PSAs created by Stafford students and posters designed by Castleton University students.

“Those students had absolute free rein to do whatever inspired them,” Marchinkowski said.

Jamie Bentley, co-chair of the VISION health committee, said she and the members all had a chance to watch the videos the students had “developed, created, directed and starred in” to choose their three favorites.

Marchinkowski said more than 40 community members viewed and rated the videos to decide which three would be submitted to WCAX and PEG.

Marchinkowski pointed out that the students who created the three videos chosen will receive more than credit.

“I wanted to mention that the Stafford program was really wonderful. There’s a production fee for these videos and they forwarded the fees to the students so not only are these three winning students getting a lot of press and recognition and being able to see their work live on TV, they also receive some cash prizes. So that was really cool,” she said.

Cristina Kumka, who has been instructor of video communications at Stafford for six years, said by email Thursday she was concerned about whether her students were prepared to handle such a serious topic as the safe use of prescription opioids.

“I questioned whether the students had the drive to get it done, as many were dealing with social isolation issues, family issues and overall pandemic fatigue. The back and forth inconsistency of education during the pandemic put many of them in a rough spot mentally. But they pulled through and my class of 16 students submitted a total of 10 opioid PSAs,” she said.

Kumka told those at the VISION meeting that while she didn’t know what to expect from the 2020-21 school year, her students had won 25 cash prizes and first, second or third place in statewide contests.

She said the most impressive thing she had seen though was Martell appearing at Project VISION by video wearing a suit. He pointed out that he was wearing pajama bottoms

Martell said he was really excited when he learned his video would be aired on television.

“I was like, great, now other people will see this message. I’m just hoping it will speak to some people and possibly change lives. That would be amazing,” he said. 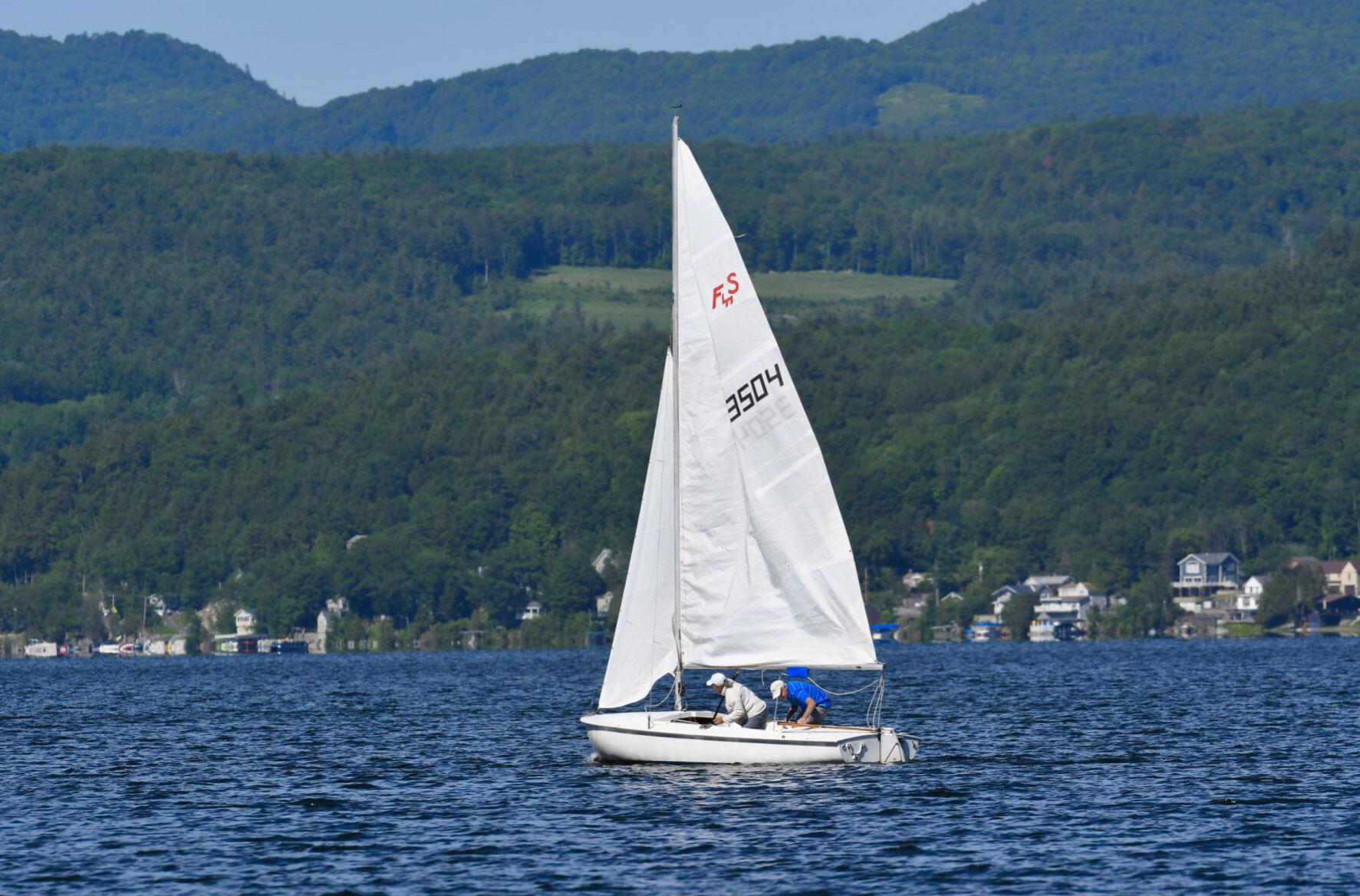 Sailors tack across Lake Bomoseen in Castleton on a bluebird Thursday afternoon as they use the wind to propel them gently across the lake.

As Vermont reopens, Vermont Adaptive Ski and Sports is paying attention to those it’s reopening for.

The organization announced this week that it had received a $75,000 “Summer Matters for All” grant to provide outdoor recreation opportunities this summer to young people with disabilities.

“We want any kid K-12 with a disability throughout Vermont to come and play with us whenever they want because it’s free,” VASS representative Kim Jackson said.

VASS is most famous for its winter activities, but has run summer programs since 1996 including canoeing, kayaking, paddle boarding, mountain biking and hiking.

Jackson said the grant will cover up to 1,500 lessons and outings at no cost statewide. She said she did not want to compare to 2020’s numbers because the pandemic rendered it an outlier, but that in 2019 they did 840 outings or lessons — none for free. Programs will be offered in Rutland, Chittenden and Washington counties.

“The kids had a rough year for school,” Jackson said. “They need to be out and about and socializing with their friends. ... Our participants are a vulnerable population because of their disabilities so they were affected pretty hard.”

On top of that, the grant will cover an apprenticeship program for youths interested in becoming junior instructors for VASS.

“We have about 400 volunteers right now who are 18 and older,” Jackson said. “We’ve been looking towards trying to get younger kids involved. ... If they get involved at that age, we hope they’ll continue on and be volunteers with us when they turn 18.”

Cassie Willner, representative for Vermont Afterschool, a nonprofit working on the grant program, said there was a huge need for such services for youths with disabilities.

“Out of the grant applications, we’re really excited to have this chance, through Vermont Adaptive, to support youth in Vermont,” she said. “It’s a great program, and we’re glad to help.”

Kim Peters, Rutland’s recreation superintendent, said VASS is so effective that she rarely even needs to refer people to them because the population that needs their services knows how to find them. She said she expects to have some talks about using city facilities for the summer program.

“The Rec is there to support them in any way we can,” she said. 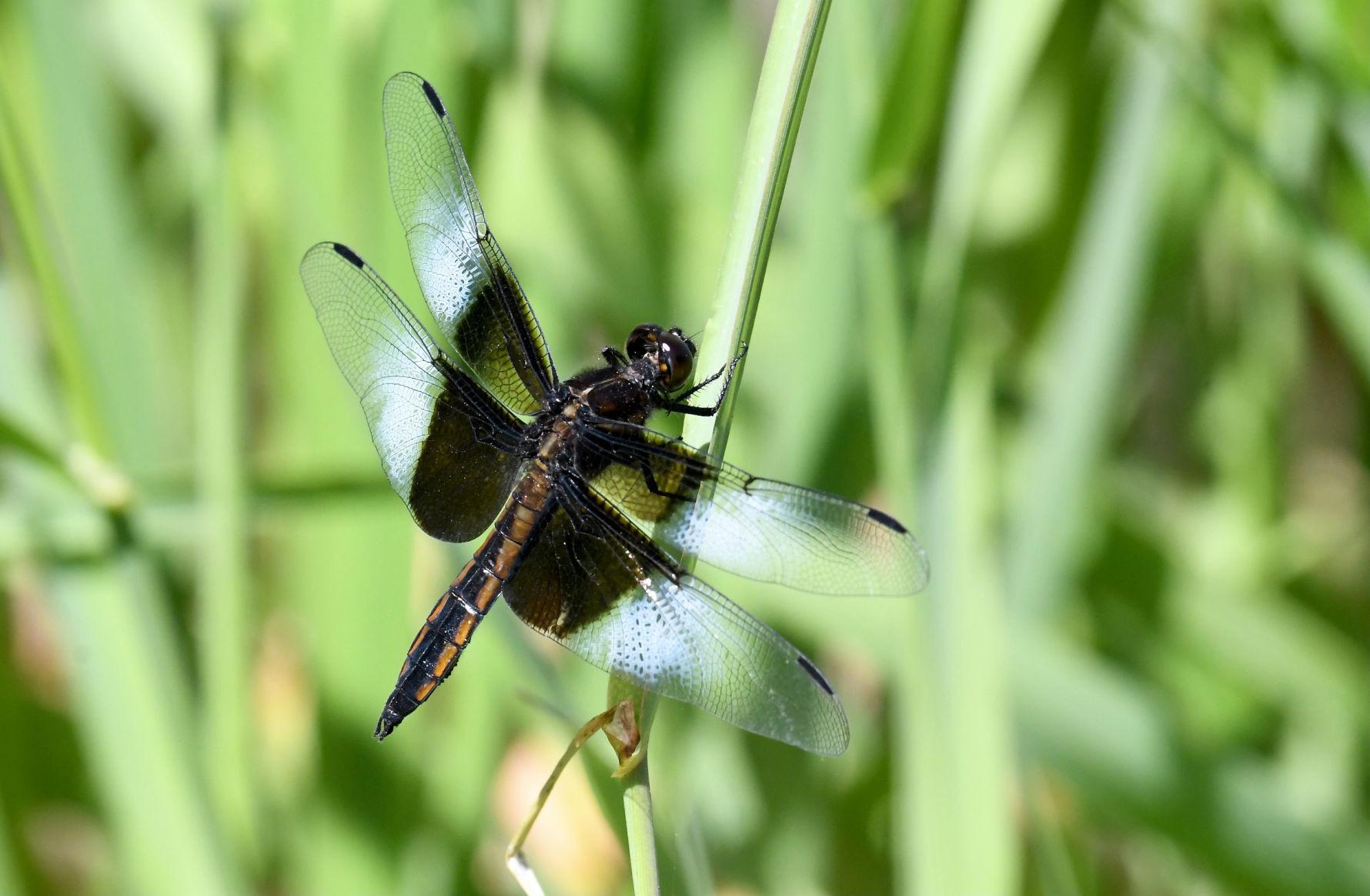 A dragonfly lands on a cattail in a marshy area along the edge of Richville Pond in Shoreham on Thursday afternoon.

Dragonfly on a cattail

PAWLET — Daniel Banyai plans to appeal an Environmental Court ruling ordering him to shut down his firearms training school, demolish any unpermitted buildings associated with it, and pay the town $46,000.

A notice of appeal was filed with the Vermont Supreme Court on May 11 by Banyai’s attorney, Cindy Hill, of Hill Attorney PLLC, based in Middlebury.

Banyai has represented himself up until this point.

According to Hill’s notice, she intends to ask the Vermont Supreme Court to look at whether or not due process abrogated with regards to landowner notification, whether the Environmental court overstepped its authority and abused its discretion with assessing fines, whether it did the same in finding that Banyai’s activities on his property constituted a change of use, and whether the Environmental Court violated Banyai’s property rights by saying the town could require him to seek permits for activities he was already allowed to do.

“Appellant asserts no basis for disposition by the full Court,” she wrote, arguing that the issues identified by Hill hadn’t been raised before, that there’s been no new law or way to apply the law to any new facts, that there are no legal issues of public interest, no call to criticize an existing law, and does not resolve a conflict between courts.

Bent stated in an email that Hill has until July 19 to file a brief. Bent will have 21 days after that to respond, and then Hill gets 14 days to file a response to that. Either side can request an oral argument. Bent said it’s difficult to predict how long it will take the court to issue a decision.

“The Environmental Court did defer ruling on the motion for contempt until the appeal is done,” Bent stated. “In the event that Mr. Banyai persists in violating the Court’s orders, we may ask the Court to revisit it. We do think the Court has the authority to enforce its own injunction when an appeal is pending, because the rules state that injunctions stay in effect even if an appeal is filed unless a stay is granted. No stay has been requested or granted in this instance.”

According to court records, Banyai bought 541 Briar Hill Road in West Pawlet in 2013, but it wasn’t until 2017 that he began operating the Slate Ridge firearms school there. The town claims he did so without the necessary permits.

Banyai’s relationship with the town and his neighbors has been strained, with neighbors reporting they feel threatened by his behavior.

On Wednesday, Vermont State Police said they had received reports of someone believed to be Banyai recording video of the homes and businesses of some town officials. Police spoke to Banyai, who told them he was recording the community. Police said they determined that no crime had been committed. On May 25, Pawlet Select Board Chair Michael Beecher emailed Planning Commission Chair Jessica Van Oort telling her that Banyai had been seen recording near the homes and business of commission members and Development Review Board members.

A Development Review Board hearing was slated for Thursday to hear an appeal on a permit Banyai had been granted for a shed. The appeal was filed by Richard Hulett, a Select Board member and neighbor to Banyai.

Durkin took note in his decision of Banyai’s behavior with the court and dealings with town officials, writing that he’s been unduly confrontational and combative. The decision also mentioned Slate Ridge social media posts, specifically one where a vehicle was marked with “Hulett Trucking” and shot by a firearm.

Hulett’s wife, Many Hulett, applied for a restraining order against Banyai. Mandy Hulett told the court of a Slate Ridge social media post where the page was asking for a vehicle for use in firearms training that matched the make and model of one the Huletts had purchased for their daughter.

At a Dec. 16, 2020, merits hearing, Banyai refused to testify at cross-examination and didn’t participate in the rest of the hearing.

U.S. regulators extended the expiration date on millions of doses of Johnson & Johnson COVID-19 vaccine by six weeks. A8