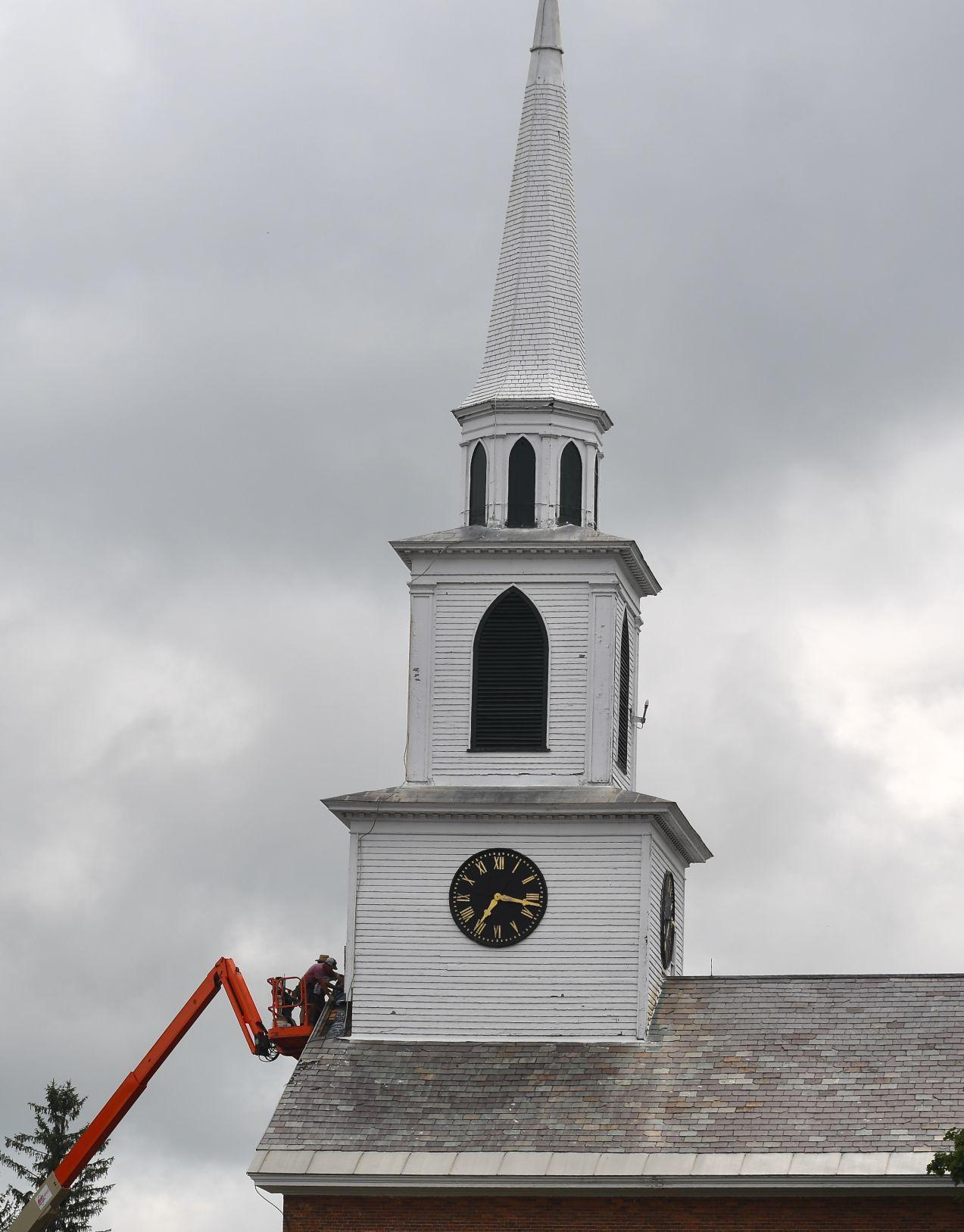 A painting crew uses a lift to paint the steeple of Brandon Congregational Church on Tuesday afternoon.

Stairway to Heaven (with paint)

A group of friends and MSJ classmates of author Mark Treanor (center) gather in the bandstand at Main Street Park in Rutland for a book-signing event and get-together Tuesday afternoon. From left to right are Rich Guyette, Peter Abatiell, Julie Abatiell, author Mark Treanor, Tom Anoe and Eleanor Hart.

Mark Treanor said his novel, “A Quiet Cadence,” has only been in print for a few weeks.

“The book follows a 19-year-old Marine throughout his time in Vietnam and then for several years after that, but it is told by him when he’s 65-years-old so he’s got the perspective of looking back and trying to, for the first time, talk about his experience and tell people that he cares about it,” Treanor said.

The book is fiction but based on facts. Treanor was a Marine rifle platoon leader during the war.

Some prominent readers have supported the book including former secretary of defense and retired U.S. Marine Corps general, James Mattis.

“A must-read for any American who wants to understand war and its impact on those we send into close combat. Mark Treanor sets the standard for an authentic description of combat and what our infantry veterans carry with them when they return home,” Mattis wrote.

The novel is informed by personal experience.

Treanor said after he graduated from MSJ, he went to the U.S. Naval Academy in Annapolis, Maryland. At the time, about 10% of each class was allowed to volunteer for the Marine Corps.

He entered the war, where he served for a year as a 22-year-old 2nd lieutenant.

After growing up in Rutland County, including going to Christ the King School for eighth grade, Vietnam was a different world.

“It was really, really different as you can imagine. To go from a place like this,” Treanor said at the peaceful Rutland park, “and civilization to being over there where basically, as an infantryman you live in the dirt and you eat cold food out of little green cans.

“In some respects, it was like walking into the pages of a ‘National Geographic’ because there was nothing in the area I worked in but rice paddies and bamboo huts, or, as we called them, ‘hootches,’ that the local people lived in, the Vietnamese people lived in,” he said.

During his time in Vietnam, Treanor saw worse than a country that was unlike Vermont.

“Literally every day when we were out in the bush, it was a question of, ‘Is somebody gonna hit a booby trap?’ The area we worked in was heavily booby-trapped. Or were we gonna be in a firefight? It’s really interesting to look back on it and realize how resilient and courageous and dedicated what were mostly 18-and 19-year-old kids were,” he said.

Treanor said he has been interested in writing for about 30 years. After he retired from most of his legal work, inspiration struck.

“I decided that I wasn’t aware of any novel that combined (these perspectives), the first half of it being a very authentic depiction of infantry combat on the ground with what it’s like to deal with the memories and nightmares in the years afterwards,” he said.

With the book finished, Treanor said he took pride that it earned endorsements like the ones from Mattis, retired Gen. David Petraeus, who was the commander of the multinational force in Iraq and retired Adm. James Stavridis, former NATO supreme commander.

On Tuesday, Treanor said he was at the park with about a half-dozen people who were MSJ classmates who wanted him to sign the book. All of the visitors were wearing masks and practicing social-distancing.

Tom Anoe, another member of the Class of 1964, said he knew Treanor while they were both in school but not well. He said he is reading “A Quiet Cadence” now.

“I’m enjoying it. He tells me it’s a novel but it seems like real life to me. It’s scary. I mean, it’s a well-written book,” he said.

Anoe said his class was close, and he believed MSJ’s Class of ’64 was the largest ever at the school with more than 200 members. He said he believed other classmates wanted to be there on Tuesday but had concerns about COVID-19. A remote event is being planned for more alumni to reconnect with Treanor and talk about the book.

Treanor said the book took about three years to write and needed eight or nine drafts to be ready for publication. He’s working on three other books.

After the war, Treanor spent another 3½ years in the Marines before entering law school. Working in private practice or for corporations, Treanor was active in the law for almost 40 years and now spends time consulting or serving on corporate boards when he’s not writing.

He said he spent about five years, starting in 1993, living in Stratford as part of his legal career although his work was primarily not based in Vermont courts but around the United States.

Treanor said the book, published by Naval Institute Press, is available through general bookstores or online at sites such as Amazon.

Tests for COVID-19 on eight officers of the Rutland City Police Department who were exposed to the disease earlier this month indicate none of the officers have the virus, according to Chief Brian Kilcullen.

The results for that one outstanding test should be available by the end of the week.

The need for testing was the result of a June 17 arrest made by RCPD members. Police responded to a report of a possible stolen car but arrested a woman involved because she had an outstanding warrant in Pennsylvania.

The woman, who police said was asymptomatic and didn’t say she was sick, was taken to the Springfield jail where a routine test done on incoming inmates found she had COVID-19.

Kilcullen said his officer had not encountered a similar situation in the last few months since patients with COVID-19 were identified in Vermont.

However, he said it was a learning experience which will help avoid similar situations in the future, Kilcullen added.

For example, Kilcullen said the incident was a reminder of wearing gloves when police are handling someone else’s property.

Another lesson learned is keeping the number of officers in direct contact with a suspect as low as possible.

All of the officers involved in the incident are back at work, except for the one awaiting the results of the second test.

Last week, Rachel Feldman, spokeswoman for the Vermont Department of Corrections, said the woman was being handled by the corrections’ department protocol for inmates who test positive for COVID, which keeps them from coming into contact with other inmates.

Star of stage, screen and television, a writer, performer, director, mentor, husband and father, Carl Reiner, 98, passed away Monday night at his home in Beverly Hills. A6