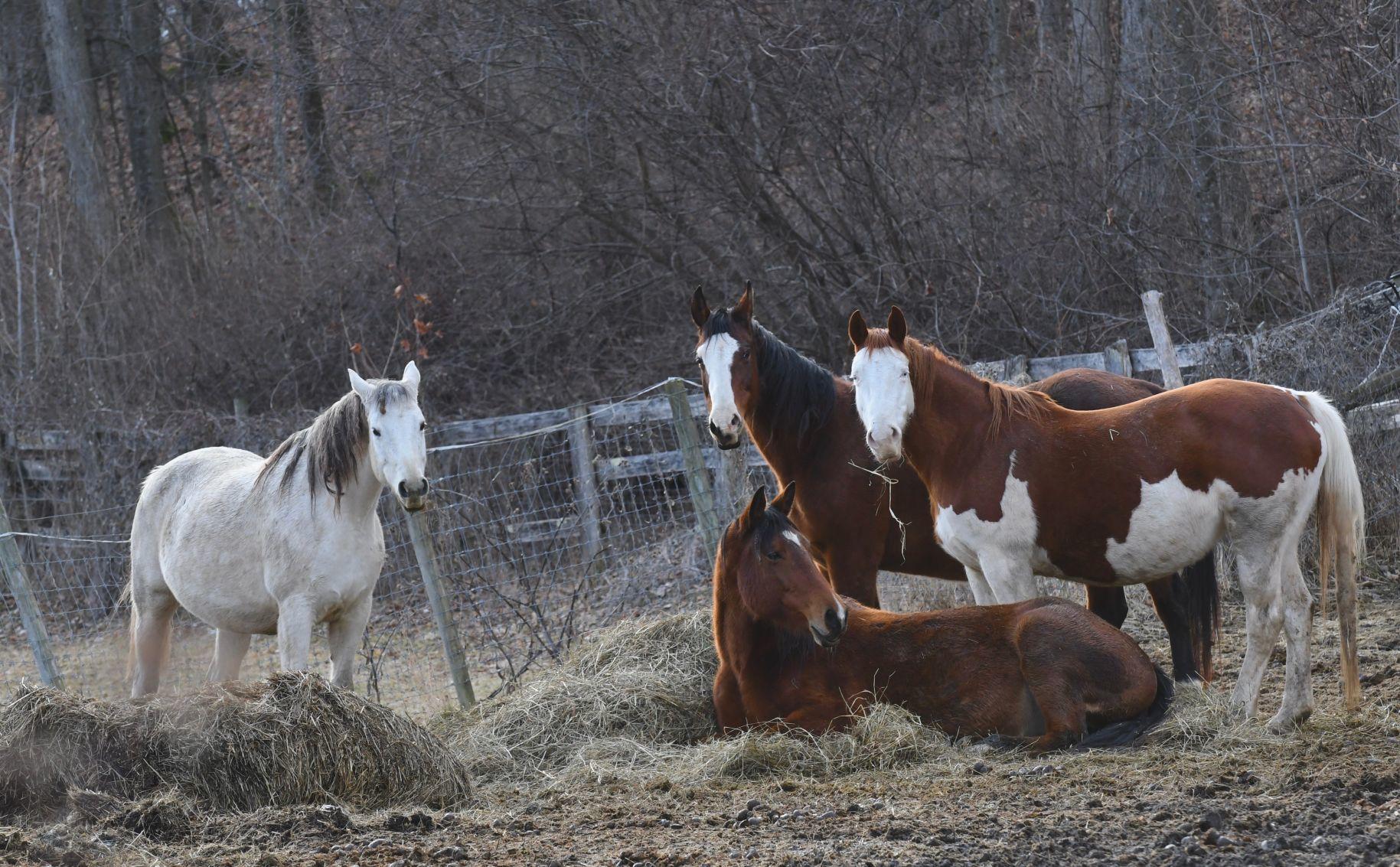 Snacktime at the farm

Four horses relax and enjoy a tasty snack of hay on Wednesday afternoon at a farm in Benson along Route 22A.

The Rutland City Public Schools District is one step closer to finding a new superintendent.

The application window for internal candidates closed last week, according to Dick Courcelle, chairman of the district’s board of commissioners. Courcelle said Thursday the job drew interest from individuals within the district, but would not disclose the exact number of applications they received.

The job of superintendent became available in August when the board accepted then-superintendent Adam Taylor’s request to be placed on indefinite leave through the end of his contract in June 2020. The request followed the board’s formation of a committee to renegotiate Taylor’s contract and develop an improvement plan.

According to Courcelle, there are currently “6 or 7” individuals in the district who have a superintendent endorsement. He added that there are also other individuals who are eligible for the endorsement, but did not know exactly how many.

The board will meet Jan. 21, to review applications and set up interviews with prospective candidates, which will be conducted the following week. Courcelle said he hopes to have an offer on the table by early February. If no clear choice emerges, he said the board will be ready to open an external search.

While unable to comment on specifics, fellow board member Hurley Cavacas Jr. said he believes “we have strong candidates.”

Cavacas said they are looking for someone with good leadership skills and who can work well under pressure. Ultimately, he said, the ideal candidate will be able to “help navigate the, I believe, financially troubling times on the horizon for most school districts in Vermont.”

Courcelle said the board hopes to have someone hired by spring so the new superintendent can work with Wolk to ensure a smooth transition. 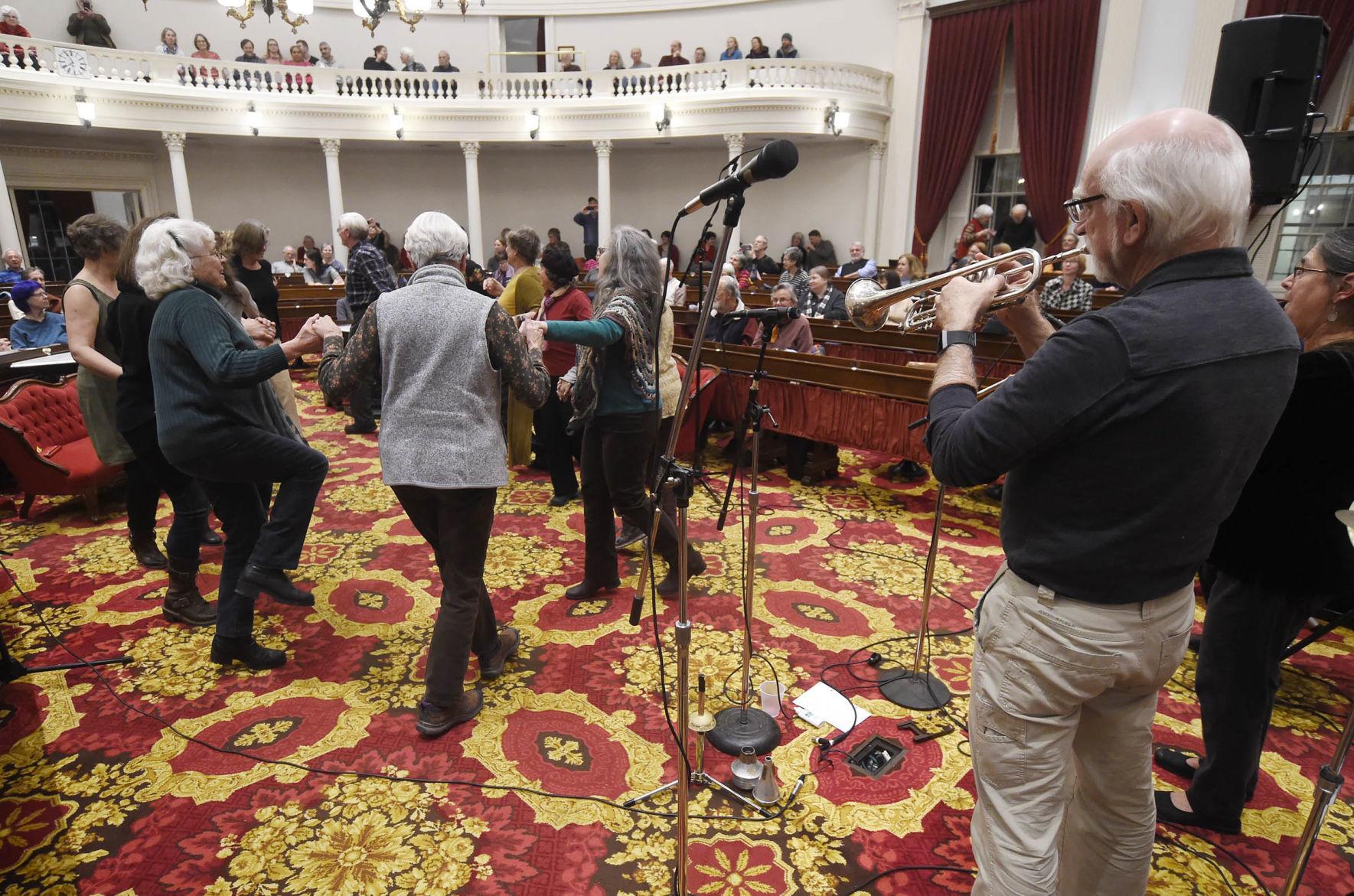 Citizens and lawmakers dance Wednesday night to the music of the Nisht Geferlach Klezmer Band during the first free Farmers’ Night performance of the season at the State House in Montpelier. Next Wednesday will feature the Vermont Symphony Orchestra with Music Director Jaime Laredo’s final Farmers’ Night program.

MONTPELIER — Tourism and marketing groups have until the middle of February to try tapping a new $80,000 grant program aimed at attracting more people to the state.

The Agency of Commerce and Community Development announced Wednesday that it’s accepting applications for the “Regional Marketing and Recruitment Grant Program,” which through Act 80 of 2019 allocated $80,000 for projects related to bolstering the workforce and attracting people to the state to either visit or live.

The deadline to apply is Feb. 15. Applicants have to match dollar for dollar what they apply for. The application can be completed online at bit.ly/0116Market, where more details can also be found.

Mike Coppinger, executive director of the Killington Pico Area Association, said he’d heard this announcement might be coming, and now that it’s been made, it might be time to get the members of the Killington Valley initiative into a meeting. The initiative was started in 2016 and involved the KPAA, the Rutland Region Chamber of Commerce, the Rutland Economic Development Corp. and the Chamber of Commerce, and some others working to boost the area’s economy.

Coppinger said when it comes to grant applications, those holding the purse strings tend to favor group efforts. While a discussion on what to pursue would need to take place, he feels adding to existing efforts, namely the Stay to Stay, and Stay to Ski weekends, would be prime candidates for projects to fund.

The weekends essentially show people who are considering moving to an area what the place is like. Coppinger said they target young families, mostly, and in this area they’re geared towards young families who enjoy outdoor activities.

“I’m excited to talk about the possibilities for these funds,” Coppinger said.

Also excited is Joel Schwartz, executive director of Barre Area Development Corp., who said in an interview Thursday he wants to apply for the maximum amount allowed, $20,000.

“We are well positioned to apply,” he said, adding that his group has several programs that would qualify for the funding, as do its neighbors with whom it often collaborates.

Schwartz said he’s a fan of the Stay to Stay weekends and would like to bring one to the Barre area.

While he welcomes this funding, he said more would help. “The state of Vermont should do a lot more with marketing,” he said.

Lindsay Kurrle, secretary of the Agency of Commerce and Community Development, said in a Thursday interview that so far, only the $80,000 has been allocated to this program. She expects many will apply, and it’s likely all the funds will be distributed among many applicants. She said collaborative efforts would likely get a higher priority.

“We’re going to give them an opportunity to broaden their efforts,” Kurrle said, adding the state is working on broader efforts, while these grants are aimed at boosting local programs.

“Quite a week of substantive accomplishments for the nation, for the president and for our international trade.”

Senate Majority Leader Mitch McConnell, R-Ky., just before passage of the USMCA trade agreement which rewrites rules of trade with Canada and Mexico. — A7

The Vermont Department of Health declared Thursday that a statewide outbreak of hepatitis A is underway. A3

Department of Homeland Security asks the Pentagon to pay for 270 miles of the border wall as part of the administration’s ongoing counter-narcotics effort. A10