Board of Aldermen President Matthew Whitcomb said this week he has tested positive for COVID-19.

The illness was why Whitcomb was absent from the Board of Aldermen meeting Monday, though Whitcomb said Wednesday he is feeling fine.

“I’m one of the insanely lucky people in that I’ve been almost entirely asymptomatic,” Whitcomb said.

Whitcomb said his test was Thursday of last week. He said he woke up the day before with a slight cough, but thought little of it because of the cold, dry weather. He also had just undergone a treatment he receives every six months for his multiple sclerosis, and he typically gets a minor cold shortly afterward.

“It felt identical to that,” he said — a very slight cough but otherwise he felt fine.

Whitcomb works as an administrator at Dartmouth-Hitchcock Medical Center and was scheduled to go into the facility the next day. He said he called to report his respiratory symptoms and was initially told not to bother getting tested owing to his lack of other symptoms. Whitcomb said he persisted largely out of a sense of responsibility and was surprised when it came back positive.

Dartmouth-Hitchcock replied to inquiries with an email saying that everyone entering the hospital has their temperature taken and is questioned about symptoms and possible exposure. Everyone in a Dartmouth-Hitchcock facility is required to wear a mask at all times, according to the email, and employees must log in to a screening system and attest that they do not have a temperature higher than 100 degrees.

Whitcomb said he is not aware of any outbreaks at the hospital.

The Board of Aldermen put an order of succession into place early in the pandemic so a member would be poised to temporarily step into the role should the president be incapacitated. Whitcomb said he invoked that plan for this week’s meeting when he got his diagnosis and decided that even though he felt fine by Monday, it was better to stay away and let Alderwoman Sharon Davis run the meeting rather than to “create further chaos.”

Whitcomb said he does not know where he was exposed.

“I’m racking my brain,” he said. “All I do is home and work, and even when I’m out, I’m taking a walk socially distanced.”

He said the most likely cause was some incidental exposure at work.

Whitcomb said he was doubly lucky because his MS puts him at an elevated risk for serious illness.

“I feel fine,” he said. “I’m realistically well outside of the window of developing anything. The slight cough I had on Wednesday resolved, and I haven’t had anything since.”

Whitcomb said none of the people he might potentially haves exposed at work have tested positive, but he does not believe he was a false positive because his fiancée subsequently contracted COVID.

“She’s much more symptomatic,” he said. “I’m confident she’s going to recover and be fine. I had kind of an anomaly in my case in the best way. Even when they say you have mild COVID, it means you’re going to be sick for seven to 10 days, flu-type sick.”

Nick and Julie Monaco are all smiles at their home on James Street in Rutland after Nick’s double-lung transplant was a success. Nick went to Massachusetts General Medical Center in Boston for the intensive operation and has been recovering rapidly since the transplant.

It was a Friday in December when Nick Monaco, of Rutland, got the call that would change his life.

“Julie and I had just finished lunch and the telephone rang,” said Monaco. “That was the call coming in from (Ann Marie Radwich) who said we have a set of lungs for you. We would like you to start heading to Boston.”

Monaco, 58, has chronic obstructive pulmonary disease (COPD), which in his case stems from a genetic problem that keeps his body from producing an enzyme needed for his lungs to stay strong. He’s known about it since he was in his 20s, but it wasn’t until 2016 that his doctors told him his time was about to run out and that he needed a double-lung transplant.

Radwich is a member of the transplant team, and was Monaco’s contact person for when a donor was found. Monaco has been getting treatment at Massachusetts General Hospital in Boston. He often goes with his wife, Julie, a paginator at the Rutland Herald, and they’re often accompanied by one of their daughters or sons-in-law.

After the call that Friday, they were off to Boston in about an hour.

“We were thinking, too, this could have been a dry-run, because back in July 2020 I got a call and we got half an hour away from the hospital, and they called and said they were sorry, but they couldn’t use the lungs at that time,” said Nick Monaco.

Julie was allowed to enter the hospital with him, for a time, but the rest of the family had to wait, owing to the hospital’s coronavirus precautions.

The operation took seven hours. It was finished at about 7 a.m. Saturday morning, but Monaco slept most of the day, waking up at about 6:30 p.m. He recalls wondering why they’d woke him up so early after the surgery, not realizing he’d been asleep for so long.

His recovery has been remarkable. Monaco said he remembers taking his first walk without the aid of breathing tubes. He made it 325 feet, which earned him applause from the nursing staff.

“It felt good to be able to walk and breathe, even with a mask on,” he said. “Before the operation, I wouldn’t have been able to do that, because I was on 6 to 8 liters of oxygen just trying to walk.”

While he spent several days in the hospital, he wasn’t there nearly as long as he might’ve been. He credits the hospital staff and their level of care, but his own actions helped, too.

“The reason they think I did so well with recovery is, I tried to stay in good shape up to when I got the call,” he said. “I would exercise, even though I didn’t feel like it at times and I struggled breathing, I continued to try to keep my health up.”

To keep their friends and family up-to-date on Monaco’s health, there’s a blog, bit.ly/0203Poppy, that people can visit.

His lungs were not in good shape when he arrived at the hospital for his transplant on Dec. 11.

“The surgeon called me and said when they opened up Nick, they saw his bronchial tubes were three times the size of a normal bronchial tube, because when we got there he was in respiratory failure,” said Julie Monaco.

The tubes were enlarged because they were trying to act as his lungs, she said, something they are not supposed to do. He ended up with donor’s bronchial tubes, as well.

For Teri Wos, one of the couple’s two daughters, seeing how bad a shape her father’s lungs were in was hard.

“I knew his lungs were tired, I knew he needed this, but I think I didn’t fully realize everything until I was actually able to see a picture of one of his lungs that they took out, and it was actually the better of the two, and as soon as I saw it I broke down,” she said. “I couldn’t even control it. It just put into perspective just how bad it was and how hard he had to fight every single day to just keep going.”

He’ll have to take expensive medications for the rest of his life to keep his body from rejecting the donated lungs, and there’s the possibility there will be a rejection within the next six months.

Nick Monaco said the operation alone cost $1 million. While insurance is covering 80% of that, 20% of $1 million is still an enormous expense, and that’s not counting the cost of travel to Boston, or the full cost of medications.

“Financially, it’s been a struggle,” said Nick Monaco, adding that a basket raffle his family organized for him in March will help pay for medications for a while.

He said there are programs out there the pharmaceutical companies direct people toward that can help pay for the medication. Even so, Julie Monaco had to draw from her 401(k) plan to help, and the couple doesn’t think they’ll be able to run another fundraiser. They said they were reluctant to ask people to begin with, but like many others, they had no other recourse.

“So after the medication eats up those funds, then we have to figure out what we’re going to do,” Nick Monaco said. “That’s when you’ve got to look for these places pharmaceutical companies direct you to, to help.”

He said he’s grateful to the people within the community who have helped however they could.

He’s especially grateful to his family, Teri Wos, her husband Jeff, their kids, Emma, Carter and Cooper; his other daughter, Tina Dunne, her husband, Shawn, and their kids Bella and Cassidy. Nick and Julie Monaco also praised Dr. Mauricio Villavicencio, for his work, as well as Anne Lafleur, the social workers who helped them through the process.

He said he’s also grateful to the donor and hopes to meet their family once it’s allowed and if they’re willing.

“I just can’t thank the Lord and my donor enough, I thank them many times a day,” he said, adding that he plans to honor his new lungs each day from here on out.

According to Nick’s doctors, his new lungs are 95% what they should be, an improvement he’s happy with.

“I’m looking forward to being able to do some fishing with my grandsons, and hopefully with my godsons; I would love to be able to do that,” he said. “Maybe this spring, I know it’s still going to be early, but just venturing out and being with some family members, hopefully, after this COVID thing gets under control, and do some outdoor activities that I haven’t been able to do.”

As for now, he’s keeping up his exercise regimen and doing tasks around the house.

“Seeing him breathe without the hoses, and walking around the house and not struggling like a fish out of water, and hearing him sleep at night peacefully, I don’t care if he ever does anything around the house again,” said Julie Monaco. “I want him to go enjoy himself and do the things he misses like fishing and being in the woods, and playing with his grandchildren.” 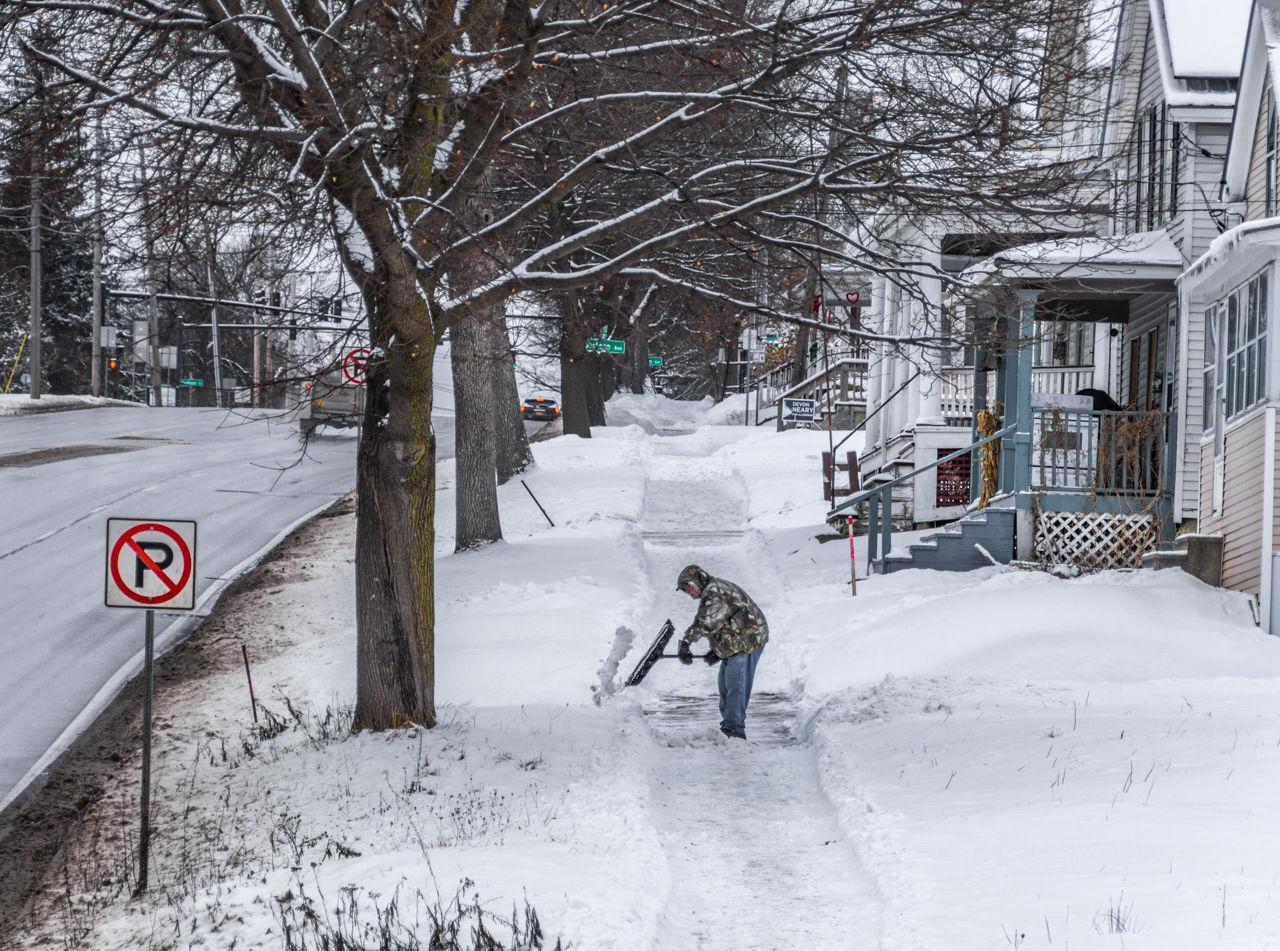 As the snow continues to fall, a city resident is seen clearing the sidewalk off Route 7 in Rutland City.

An injury in high school helped Rutland native Joe Caligiuri find his passion for training. B1