MONTPELIER — While there’s no statewide “burn ban” in effect, many town fire wardens aren’t issuing burn permits due to the dry weather.

“We’ve had such a dry year this year, and April has been warm, and part of March was dry, much less snowfall than we’d normally have, much less rainfall, and we had 60 and 70 degree days which dried everything right out, so we’ve stopped issuing permits,” Larry Brown, deputy chief of the East Montpelier Fire Department said on Monday.

His department has only responded to a few brush fires directly, but has provided mutual aid to several surrounding towns.

“Northfield had a large one, which we went over to,” he said, noting that it began as a structure fire which spread to the surrounding grass. The department sent water lines to the structure fire while lending its utility vehicle and brush fire equipment.

“We had an illegal burn the other day, which people were burning just a small pile in a burn pit and that’s not allowed either,” he said. “We stopped that right away because the wind is blowing pretty heavy in these areas and could spark quite a large forest or grasslands type fire.”

The majority of people are complying with the burn rules, he said.

“Everyone that’s called in understands we’re in a dry season and once the rains come we can open this up a little bit,” he said.

Lars Lund, state forest fire supervisor, said that while there’s no statewide burn ban in effect, it’s up to each town’s forest fire warden whether or not to issue a burn permit, which is required whenever there’s no snow on the ground around where the burn is happening.

“When you go around on the Facebook pages you see wardens and fire chiefs posting there’s a burn ban; it’s a loaded term and I think when people hear it they figure it would extend statewide,” Lund said, adding that the last statewide burn ban was in 2015.

“In the absence of snow at your burn site, you need a permit,” he said. “If it’s gray and gloomy, even if it’s drizzling or raining, that doesn’t eliminate the need to get a permit. You still need a permit.”

Getting a burn permit can also avoid the fire department getting called to a non-emergency, Lund said.

According to Lund, between March 7 and April 10 there have been 31 fires reported by town forest fire wardens. Of those, 17 were reported in March.

The largest was a 45-acre fire on March 21 in Cornwall.

Historically, most grass fires in Vermont happen in April and May, though they happen in the fall as well.

Lund said between March 9 and April 12 of last year, 19 fires had been reported to town fire wardens. The largest had been in Monkton, on April 8, burning 40 acres. This was up from the year before, which saw a particularly wet spring.

Dave Samuhel, senior meteorologist for Accuweather.com, stated in an email Monday that it hasn’t just been a dry spring for this area, but the entire year has seen less rainfall than normal.

“The prolonged dryness has definitely raised the wildfire threat,” he stated. “The trees and brush are much drier than normal. So, if a wildfire develops, it can spread rapidly in certain conditions. Any day with strong winds and low humidity, there will be a high risk of quickly spreading brush fires. Once leaves come out on trees, the fire threat will diminish significantly.”

Accuweather is, however, forecasting wetter weather in late April through May.

“So, if we can get through the next couple of weeks without major incidents, we should be in the clear for significant fire danger,” he stated.

A historic Shrewsbury home in the Cuttingsville neighborhood was destroyed by fire early Sunday morning. No injuries were reported. For more on this story, see article on A3.

Plans for the former College of St. Joseph campus include more than 200 units of senior housing, a movie theater and maybe even a putting green.

Heartland Communities of America, the Florida-based developer that hopes to buy the campus and spend $66 million on renovations there, presented its plans to the Board of Aldermen at a special meeting Monday. When the proposal was initially announced last year, the plan was for a 125-unit facility.

“What we really want to do is create a country club lifestyle at a fairly reasonable market rate for our seniors,” Weatherhogg said.

Weatherhogg said units would be rentals and amenities would include transportation to anywhere residents want to go, three meals a day available 365 days a year, a full-time activity director, a gym space, a movie theater, greenhouse space for gardeners, a craft room and landscaping for walks.

The development is planned in two phases, with the independent living units going first at a cost of $34 million. Weatherhogg said the balance of the project is planned to follow six months after that. Several financing avenues were discussed, with Weatherhogg saying there were back-up plans if preferred approaches like interest-free bonds through the state don’t work out. Weatherhogg also said they are looking for investors locally and promised the rate of return would be “quite favorable.”

The company plans to partner with Illinois-based Charter Senior Living to run the facility, which it plans to name Creekview Village.

Weatherhogg said the developer has not given much thought to what it will do with the former administration building now that it has walked away from talks with the Rutland Free Library, but that it would be open to resuming talks with the library later. He said the Tuttle Hall theater would be available to the public for a nominal fee and that there was no specific plan yet for the mansion.

“The best I can tell you is we know it will remain a beautiful asset to the community,” he said.

Weatherhogg said they were not anticipating any difficulties with Act 250 and emphasized Heartland’s commitment to the project, saying only “divine intervention” would keep it from happening.

“We’ve spent a considerable amount of money already and that’s an investment we don’t plan to waste at all,” he said.

Weatherhogg said they expected to buy the property in 45 days and complete permitting in the summer, hopefully in time to begin construction in the fall.

WEST HAVEN – A Vermont State Police Trooper who fired his gun during a Dec. 6 incident in West Haven when a Fair Haven man allegedly drove his vehicle at police will not face criminal charges for the shooting, according to Vermont Attorney General T.J. Donovan.

Trooper Craig Roland, who works out of the Rutland barracks of the Vermont State Police fired two shots during the incident, but neither apparently hit anyone.

By email, VSP spokesman Adam Silverman stated the agency was limited in what it could say since charges are still pending against 70-year-old Reginald Book, the Fair Haven man alleged to be the vehicle driver.

“We appreciate the work of the Attorney General’s Office in reviewing these complex matters. Since criminal charges against the suspect remain pending in this case, we are unable to make any further comment at this time,” he said.

The VSP Major Crimes Unite investigated the incident and presented their findings to Donovan’s office before the decision was made not to seek prosecution.

The Major Crimes Unit investigation found that troopers had been sent to a farm in West Haven for a report of a family fight.

Police determined that Book would be arrested because family members had alleged assault.

Book was found at a different farm, close to the one where the family farm was located.

He was alone, driving a small transport bus that was stopped, but which Book would not turn off or leave.

Book called 911 and had a lengthy discussion with a dispatcher that was played in court. The dispatcher told Book repeatedly that police planned to arrest him and asked him to get out of the bus so the situation could be resolved peacefully.

Spike strips were placed in front of and behind the bus.

When Trooper Jeremy Sullivan attempted to move one of the spike strips, Book unexpectedly drove his vehicle in the direction of the law-enforcement officer. In response, Roland fired two rounds from his service weapon at the bus, police said.

Sullivan was not struck.

A news release from the VSP released in December stated police first encountered Book during that incident around 2:30 p.m. and didn’t take him into custody until around 1:20 a.m., about 11 hours later.

Book was arraigned in Windsor County Court, as part of pandemic-related measures to reduce the activity in various Vermont courthouses, on a felony count of second-degree attempted murder as well as one felony count each of aggravated assault with a deadly weapon and trespass into an occupied home.

Book also was charged with one misdemeanor count each of simple assault, resisting arrest and simple assault on a protected person which caused bodily injury.

Police affidavits filed in the case said the incidents happened over a four-day period when he was visiting Vermont from Florida.

During one of the alleged incidents, police arrested Book. Three troopers and a Castleton police officer had to struggle with Book to get him into handcuffs and the Castleton officer was allegedly hurt in the process.

The charge of second-degree attempted murder is punishable by up to life in prison and a presumptive minimum of 20 years in jail. 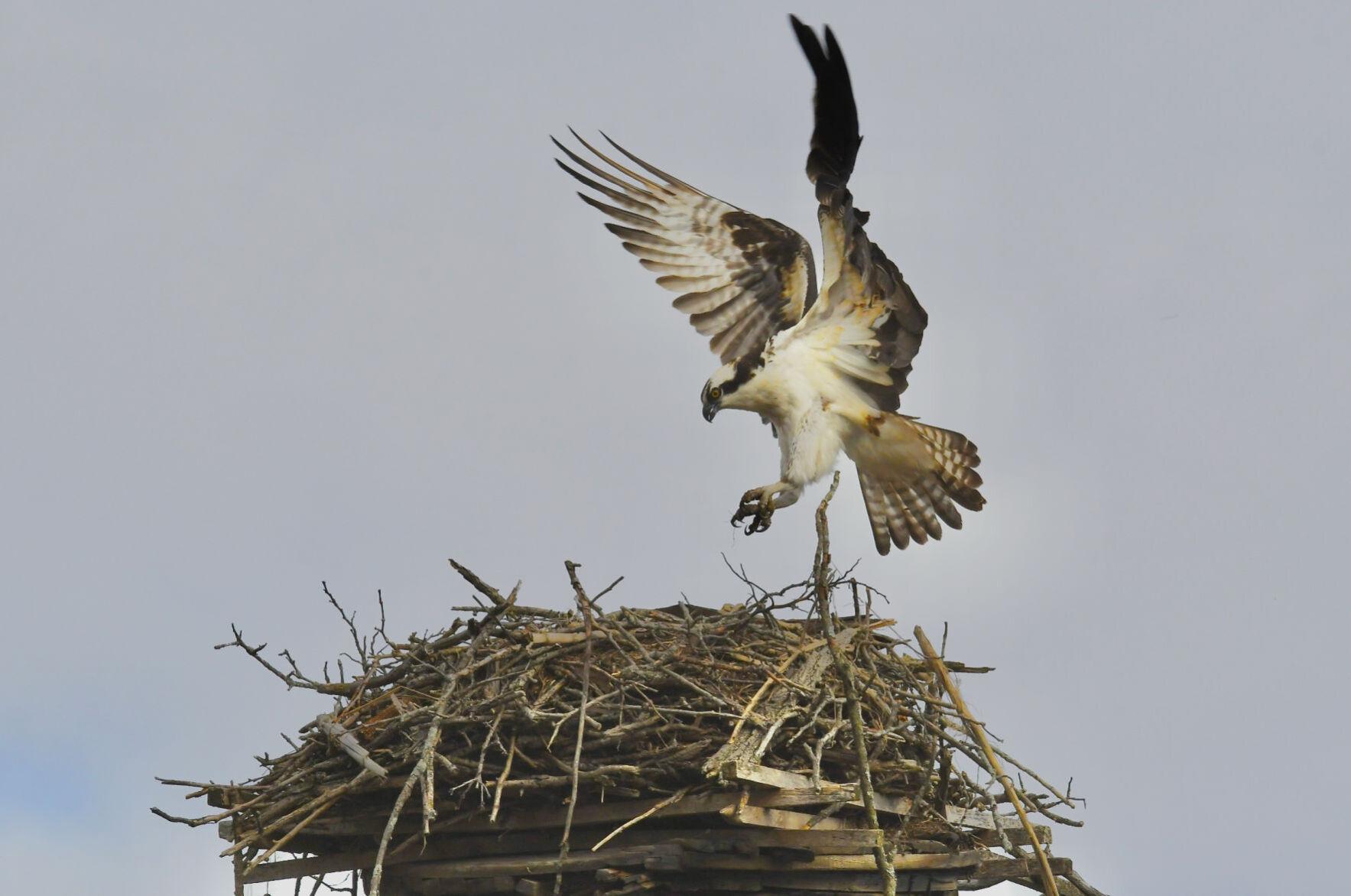 An osprey lands at a nesting platform along the Otter Creek in Weybridge on Monday morning.

“The discussion is necessary, and a good exercise. For certain, the pandemic has shifted the emphasis. The new normal really is about ‘what’s next’ and ‘what makes the most sense’ for now.”

West Rutland School is fielding a baseball team for the first time since 2016 with a group excited to make a mark. B1