The Board of Aldermen voted unanimously Monday to buy 50,000 masks and urge Rutlanders to use them but stopped short of a mandate.

The resolution was offered to the board as a compromise by Mayor David Allaire, who said he remains opposed to mask mandates but that he was “in lock-step” with public health officials on the need for people to wear masks in indoor public spaces; get vaccinated; and maintain social distancing.

A mandate, the mayor said, would be unenforceable, ineffective and divisive. “I think that’s something this community doesn’t need right now,” he said.

Alderman James Franco attempted to add an amendment to the resolution that would have turned it into a mandate, but his motion failed for lack of a second.

Franco said he was disappointed that the board wasn’t going further, especially when the Centers for Disease Control and Prevention was calling for mask-wearing in locations with high community rates of transmission.

“Quite frankly, Rutland County is clearly in that state,” he said. “It would be irresponsible of us not to consider the only tool that has been granted to us by the state. ... I’m all for unity, but I’m also for action.”

Nobody offered any debate on Franco’s amendment.

The discussion opened with an appeal from Rutland Regional Medical Center CEO Claudio Fort, who did not ask specifically for a mandate but, rather, for support from the city, saying that the hospital’s capacity had been strained by the recent upsurge in cases, as well as by people coming in for non-COVID-related care that was delayed during the earlier phase of the pandemic.

“I think ever since the government lifted restrictions in May, people felt safe to come back in the water and come back to the hospital,” Fort said.

Fort said roughly 20% of the hospital’s patients had COVID, and he confirmed that RRMC was short-staffed.

“We are asking our community to help us out to preserve our hospital capacity,” he said. “Everybody knows the routine. ... What I don’t want to see is our caregivers in the front lines having to make choices we’ve never had to make in an American hospital system.”

Fort advised particular caution through the holiday season, which began recently between Thanksgiving, and Hanukkah that ended last evening.

“That’s not to say you can’t get together with people over the holidays, but try to be careful of what you’re doing,” he said, urging people to get tested and isolate if they are feeling sick.

The only public comment came from two people from outside the city. A Shrewsbury man asked about the number of breakthrough cases and comorbidities. Fort said that would be available through the state Department of Health. Also, a Brandon woman urged against a mandate, saying she could not wear masks and would not come to Rutland were a mandate passed.

Alderman Thomas DePoy offered an amendment, and it was unanimously approved, calling on local health care providers to make an effort to make the vaccine more readily available. He said that over the weekend he went to four local pharmacies, and one in New Hampshire, and was told at each that vaccines were only available by appointment and that the wait was in the neighborhood of two weeks.

Fort said he knew vaccine clinics were happening locally but that he did not have details.

The resolution said masks will be available at City Hall and Chamber & Economic Development of the Rutland Region, or CEDRR, for distribution to businesses that want to make them available to customers.

The cost of the masks and how they will be funded was not discussed at the meeting. 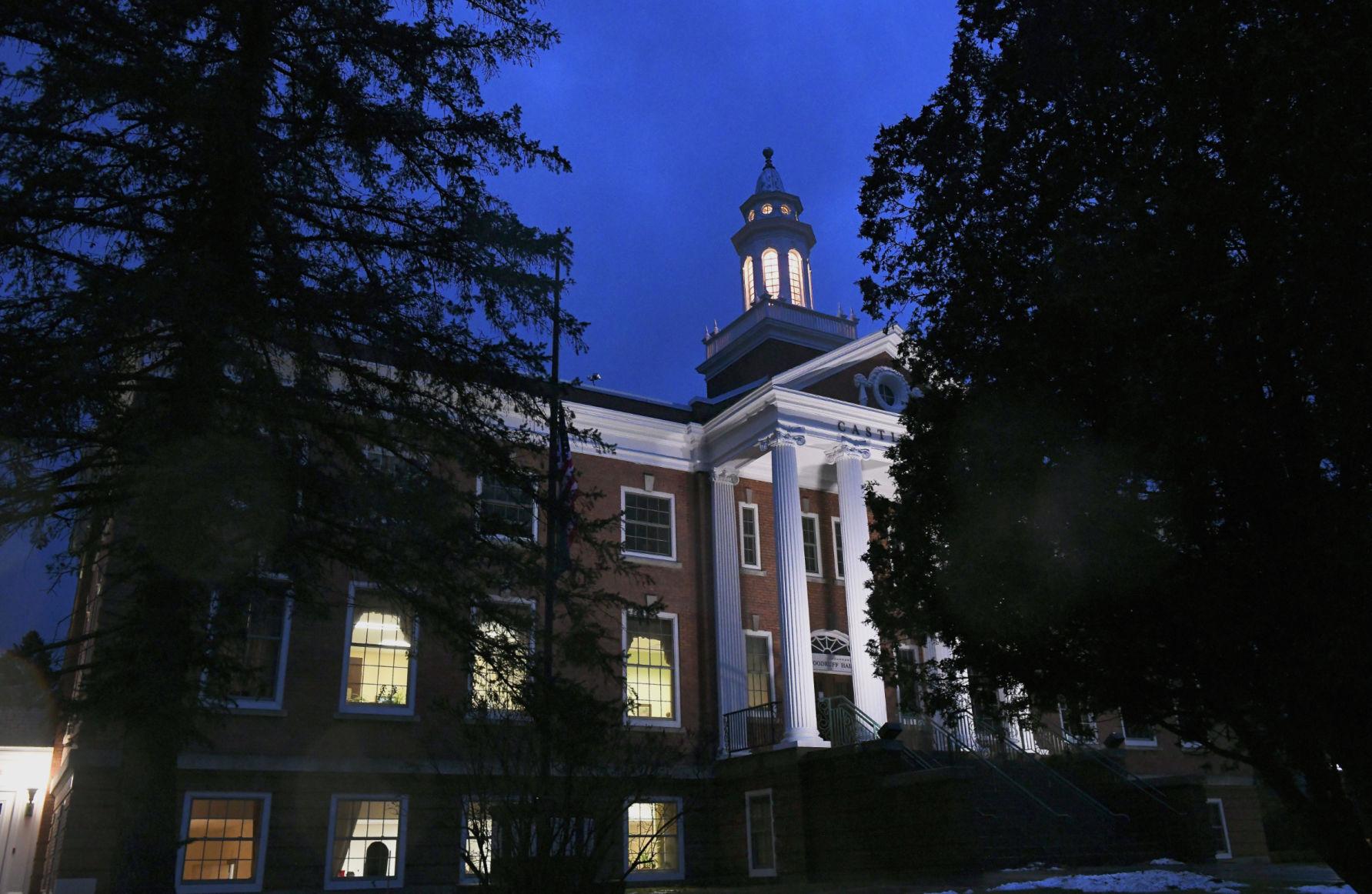 The lights at the tower of Woodruff Hall light up a twilight scene on the Castleton University campus on Monday afternoon. Interim president Jonathan Spiro has announced that he is stepping down from the position.

CASTLETON — The Vermont State Colleges System Board of Directors announced Monday that Jonathan Spiro, interim president of Castleton University, will be stepping down in just over a month.

Spiro’s departure has been called a retirement effective Jan. 3, 2022.

According to a news release issued by the college late Monday, Spiro has given nearly 20 years of service to Castleton University and the Vermont State Colleges system as a faculty member, administrator, and most recently as Castleton University interim president since May 2020.

In the release, Chancellor Sophie Zdatny noted, “President Spiro is known for his collaborative approach, his thoughtfulness, and his sense of humor. ... Spiro dedicated the majority of his professional career to Castleton as a faculty member, administrator, and leader. We are grateful for his service, professional expertise and contributions, and his community engagement, and we wish him well in his very deserved retirement.”

Castleton University’s provost, Thomas Mauhs-Pugh, has accepted the position of interim president. He spent 22 years at Green Mountain College, where he served as provost and vice president of academic affairs, interim president, dean of the faculty, education department chair, and as a professor of education.

In the release, VSCS Board Chair Lynn Dickinson stated, “I offer my sincerest thanks to President Spiro for his many years of service to Castleton University and the Vermont State Colleges system.”

She said Spiro led Castleton through “a tremendously challenging time as it navigated the challenges of the pandemic and the resulting impacts on students and employees.” She said he established the Center for Teaching and Learning at Castleton; fostered a rise in student retention; and steered Castleton through their 10-year accreditation visit from the New England Commission on Higher Education, among many other accomplishments.

“When I reflect on President Spiro’s long career at Castleton, his time in the classroom as a professor of history, his notable research on eugenics, race, and American history, and his many successful endeavors as an academic dean and department chair particularly stand out. While we will certainly feel the loss of President Spiro at Castleton, we wish him the best in his retirement,” she said.

According to the release, Mauhs-Pugh offered congratulations to Spiro on his coming retirement and stated, “I am honored to serve Castleton University and its outstanding students. Our campus is positioned to thrive well into the future with strong enrollment, immense gains in first- to second-year student retention, and many new initiatives on the horizon. Adding its strengths to the proposed Vermont State University will expand access to Castleton’s programs and open new opportunities to our students from our sister institutions.” 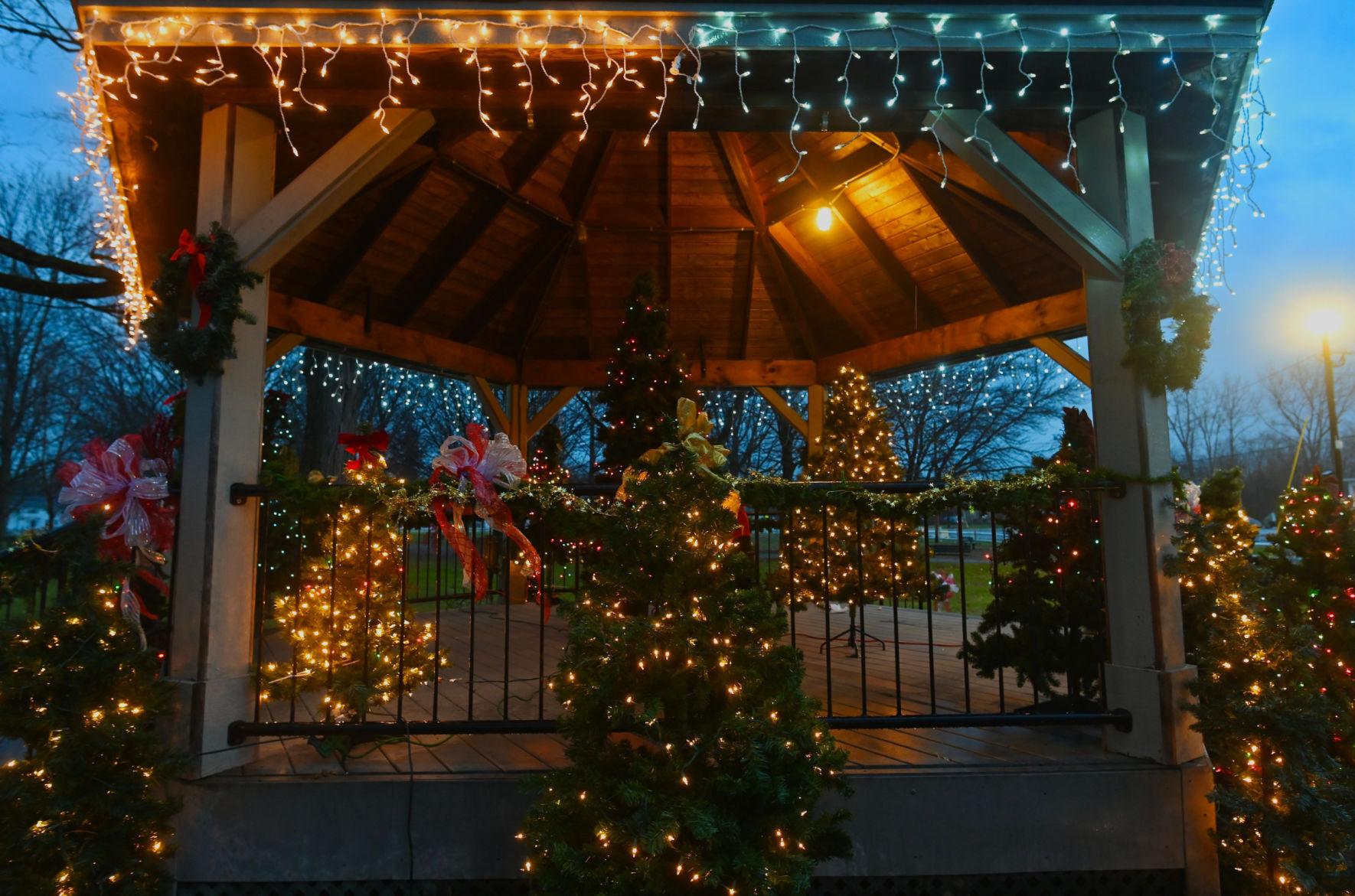 The gazebo is decorated for the holiday season on Monday afternoon at the Fair Haven Town Park.

PITTSFORD — While no one on the Select Board appears to be in favor of the wind project proposed for Grandpa’s Knob in Castleton, the board is split over when it should express its disapproval.

At the Dec. 1 board meeting, a motion to send a letter in opposition to the project was defeated 2-3. A motion to then table the matter until Jan. 19 when the developer can give another presentation passed 4-1.

The Grandpa’s Knob Community Wind Project is a proposal from wind developer David Blittersdorf for a single, 1.5 megawatt, 275-foot tall wind turbine with a 143-foot blade sweep to be built on Grandpa’s Knob in Castleton. Half the annual net profits would be distributed equitably between the towns impacted by its presence.

Blittersdorf has said this is less of a profit-making venture and more of a tribute to a wind turbine built there in 1941, the first of its kind to be hooked to an electric grid.

The project has drawn opposition from residents and town governments in the area who say it goes against their town and regional plans. The developers say they’re at least a year away from filing for a permit and plan to release more information through a website and public presentations.

Pittsford Town Manager John Haverstock told the board Dec. 1 that it has received a letter from the town of Hubbardton asking to join it in opposition to the project.

It’s believed the project would be most visible from Castleton and Hubbardton, with parts of it seen in Pittsford, West Rutland and possibly Rutland Town. It was once thought it would be seen from Proctor, but it’s now thought that town will see little, if any, of it.

“I don’t know how much more we want to have discussion on this,” said Select Board Chairwoman Alicia Malay, who made the motion to oppose the project.

Sam Carlson, speaking on behalf of Grandpa’s Knob Community Wind Project and Blittersdorf, attended a board meeting in early October, as did several locals opposed to the project. Carlson and Blittersdorf outlined what they believe are the benefits of the turbine, then heard from several locals who were adamantly opposed.

People are against this project for largely the same reasons they opposed a 20-turbine project offered in 2012 by a different developer along that same ridge line: aesthetic, environmental and tax concerns.

Malay noted that Proctor had previously opted to send a letter out stating that town opposes the project.

“While I realize the majority and certainly a lot of the town is opposed to this, certainly that’s fine, on the other hand, we haven’t given Mr. Blittersdorf and Mr. Carlson even time to really present what it is, the full facts or whatever, of this project, and personally, I think we at least owe it to them to at least present it before we strongly object,” said Selectman David Mills.

Under Vermont law, the developers would have to file a preliminary notice with the Public Utility Commission at least 45 days ahead of whenever they expect to file for a full certificate of public good, or CPG. The developers have said they’re between nine months and a year away from doing that.

“My opinion is they already made a full presentation and what they’re presenting goes against what’s in our town plans, so to even keep hearing about it and letting them have more time to convince us in some way shape or form or convince us we’re going to make all this money off of it means our town plan is worthless,” said Malay.

Town Assessor Lisa Wright claimed any funds the town might get would be largely offset by impacts to property values not made up for in taxes on the project.

Haverstock said Carlson wishes to meet with the board again Jan. 19. After the motion to table the matter until then passed, he said he would research a larger venue for the meeting, expecting it would likely draw a crowd.

A capacity crowd stands for the “Hallelujah” Chorus at the finale of Handel’s “Messiah,” an annual holiday concert at Rutland’s Grace Congregational Church, conducted by Alastair Stout.

The audience for the annual “Messiah” performance at Grace Congressional Church had a blessed experience getting to hear the classical masterpiece in person once again. A3

The Mill River boys and girls basketball teams look to build back up to success. B1