MONTPELIER — State officials say cases of the novel coronavirus are starting to come down in Vermont and nationally.

Also, they gave a briefing on the latest relief efforts passed by Congress.

Just last week, Michael S. Pieciak, commissioner of the Department of Financial Regulation, said cases of the virus had never been higher in the U.S.

At Gov. Phil Scott’s regular Tuesday news conference, Pieciak, who analyzes the pandemic data, said this week’s data “provides a much more optimistic outlook for our country, for our region and for our state. Suggesting, even, that the U.S. may have surpassed its third peak.”

Pieciak cautioned, as residents have seen during the past 10 months, things can change quickly, for the better but the worse as well.

He said the national case rate has declined each of the past seven days. He said there’s been an 18% decrease in new cases reported this week. Pieciak noted this is the first sustained decrease in cases that isn’t associated with a decrease in testing related to the holidays.

“More encouraging, new case growth is slowing in every region of the country. So the improvements we’ve seen are not limited to a small handful of states, but in fact 41 states experienced case decreases over the past week,” he said.

The state continues to vaccinate residents and will start giving shots next week to Vermonters who are 75 years old or older and don’t live in a long-term care facility. The state is finishing up vaccinating health care workers, first responders and those at such facilities.

According to the state’s vaccine dashboard, more than 28,300 people have received their first shot of the vaccine, or about 6% of the state’s population older than age 16. The Pfizer and Moderna vaccines require two shots, weeks apart, for maximum efficacy. Nearly 6,200 people have been given their second shot in Vermont.

Congress has passed more legislation aimed to help businesses impacted by the pandemic.

Former Barre Mayor Thomas Lauzon, a certified public accountant, is a member of a task force the governor created to help the state’s economy through the pandemic.

Lauzon gave a presentation Tuesday talking about what programs are available and for whom they are available. More information about the programs can be found at the website for the Agency of Commerce and Community Development.

Lauzon said the Employee Retention Tax Credit was created by the CARES Act, passed last year in response to the pandemic, and improved upon by the Consolidated Appropriations Act, 2021. He said the tax credit is refundable and is calculated on payroll and health expenses.

“Employers will receive almost immediate access to dollars by reducing required payroll tax deposits or by receiving a refund of taxes,” he said.

He said businesses that qualify will need to show a “full or partial suspension” of operations or a percentage of reduced revenue.

Lauzon said businesses that receive this tax credit can apply for a loan from the Payroll Protection Program (PPP) as well. He said businesses couldn’t have both under the CARES Act.

He said the Families First Coronavirus Response Act included a refundable tax credit, too. This one generally applies to all employers with fewer than 500 employees.

This tax credit is given to businesses that provided leave to employees from April 1, 2020 to March 31 of this year.

Lauzon said businesses can again apply for the first round of PPP funding. He said the rules are largely the same as before. He said those who are self-employed and partnerships are eligible for the loan.

He said borrowers who were approved for a PPP loan previously, but didn’t draw the full amount, canceled the loan or repaid what they were given can go back and take that money out again.

Lauzon said the qualifying restrictions on the second round of PPP loans are slightly narrower. He said eligible businesses will need to have 300 or fewer employees and show a 25% reduction in revenue through a traditional quarter, or three months time, instead of through a whole year. He said businesses cannot receive the second version of a PPP loan unless they have been given the first.

Lauzon said there’s another loan available, the Economic Injury Disaster Loan. He said unlike a PPP loan, this loan is not forgivable and is made directly with the Small Business Association to meet financial obligations and operating expenses. This loan is generally available to businesses with fewer than 500 employees, including nonprofts. Businesses that are in an “economically distressed area” and experienced an economic loss of 30% are eligible for an additional advance of about $10,000 which is a grant. The loan amount will generally be about six months of working capital, Lauzon said.

Also, he said Congress established the Shuttered Venue Operations Grant. This grant has made $15 billion available for businesses such as movie theaters, zoos and other live venues that have had to shut down due to the pandemic. Lauzon said $2 billion has been set aside for businesses with fewer than 50 employees.

He said grant funds will be given on a tiered structure with those suffering the greatest revenue loss going to the top of the list. 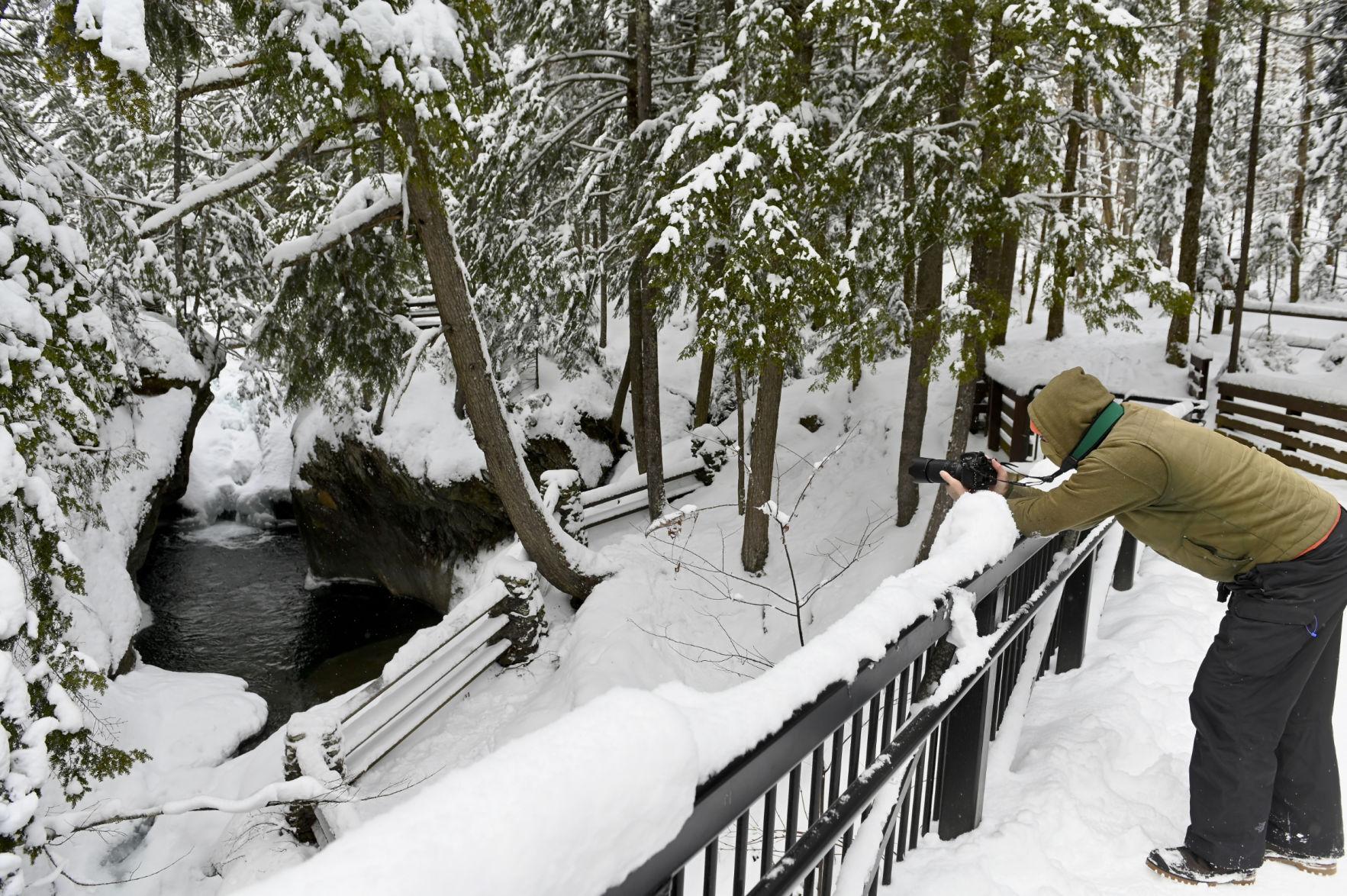 Jesse Lavoie, of Granville, takes photos of Texas Falls in Hancock on a beautifully snowy Tuesday afternoon in the Green Mountain National Forest.

The Board of Aldermen rejected a resolution Tuesday condemning the assault on the U.S. Capitol last week.

The resolution, presented by Alderwoman Melinda Humphrey, quoted Gov. Phil Scott and members of Vermont’s congressional delegation in their condemnation of the riot and their laying of the blame at the feet of President Donald Trump, and then declared support for the state’s leadership in those sentiments.

Alderman Thomas DePoy unsuccessfully sought to amend the resolution to strip it of any reference to Trump and add a condemnation of the rioting that took place in response to incidents of police brutality over the summer.

The resolution failed by a vote of 4-4.

Joining Humphrey in voting for the resolution were Alderwoman Lisa Ryan and Aldermen Chris Ettori and Michael Talbott. Voting against it were DePoy along with Alderman Paul Clifford and Alderwomen Rebecca Mattis and Sharon Davis.

Alderman William Gillam appeared to have connectivity issues throughout the meeting and was effectively absent while Gorruso appeared to have absented himself after declaring the discussion a waste of time.

DePoy said he had tried to merge Humphrey’s thoughts with his own in an effort to offer a resolution that would be less divisive.

“I did not feel I could support her version without at least showing the same contempt and outcry for the violent riots that did occur over the summer,” he said.

Humphrey roundly rejected DePoy’s amendment, calling the comparison of the two events a false equivalence, stating she would not legitimize it with an argument. Talbott dismissed it as “whataboutism” and said it was divisive to compare discontent over police brutality to discontent over losing an election.

Mattis suggested the board members would be better served by adhering to the best possible interpretations of their opponents’ arguments, noting that DePoy’s resolution clearly denounced the attack on the U.S. Capitol while placing it in the context of a violent year.

“While the argument that that’s a false equivalency is well founded, he is not wrong to place the attitude of those rioters in that context,” she said. “I just don’t believe Alderman DePoy is wrong in making that point.”

Mattis said she would not support DePoy’s resolution because she felt a resolution condemning the attack on the U.S. Capitol should be focused on it.

The only board member who voted alongside DePoy for the amendment — Gillam and Gorruso were absent for that vote as well — was Clifford.

Clifford, who created controversy by sharing a discredited Facebook post claiming the rioters were actually antifascist activists — which he then retracted and apologized for — did not participate in the debate other than to vote and ask procedural questions.

When it came time to vote on Humphrey’s resolution, Mattis said while she supported the sentiment, she could not vote for it as an official statement of the board because the debate that night showed it did not represent a consensus. She said it was not clear to her how the resolution would promote the city’s interests.

MONTPELIER — Gov. Phil Scott is isolating after officials said a contractor who has attended the two most recent news conferences tested positive for the novel coronavirus.

According to a news release, a contractor who provided services for the state at the briefings on Jan. 15 and Jan. 19 tested positive for the virus. The release did not state what service the contractor provided.

The briefings are held using safety protocols, such as physical distancing and wearing masks. They are typically attended by members of the administration, sign language interpreters and members of the governor’s staff.

“However, out of an abundance of caution, because they speak at the podium for extended periods of time, Governor Scott, (Health Commissioner) Dr. (Mark) Levine, and other administration officials in attendance will quarantine and be tested based on guidance from the Vermont Department of Health,” the release stated.

On Tuesday, Michael S. Pieciak, commissioner of the Vermont Department of Financial Regulation, was in attendance.

Tuesday’s briefing, which was typical, lasted about two hours.

Former Barre Mayor Thomas Lauzon was in attendance at Tuesday’s news conference to discuss the governor’s recovery efforts with regard to Vermont businesses.

Lauzon confirmed Tuesday evening that he was in proximity to the individual who had tested positive and has also been instructed to quarantine.

Lauzon, a CPA and a member of the governor’s task force on recovery and mitigation efforts, said he has an office at his home that will allow him to be away from others in his family.

“I guess I will be working from home for a while,” he said. “Looks like I will be watching some Netflix and Hulu.”

Lauzon said he was less concerned for himself and was more concerned for health and safety of the governor, Health Commissioner Dr. Mark Levine and other members of the administration who have attended recent briefings.

“For right now, I am going to focus on keeping my distance from family, and doing the right thing,” he said. “At the appropriate time, I will get tested and, God willing, I’ll be fine.”

The governor’s office has reached out to those in attendance at those two briefings, and they are expected to be contacted by the Department of Health as well.

Lauzon said he was notified by the governor’s chief of staff, Jason Gibbs. 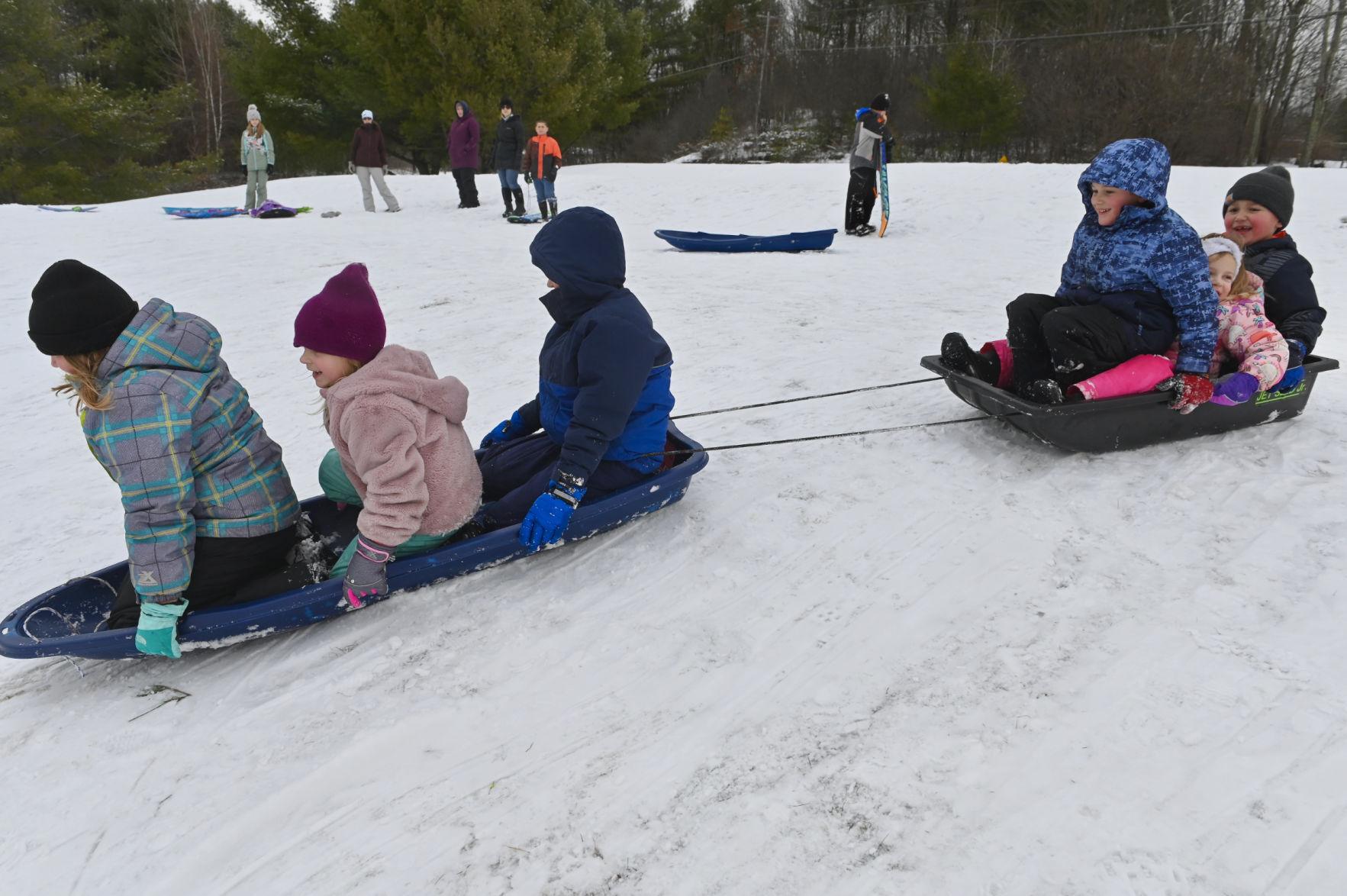 Kyla, 8, Morgan, 6, and Jacob Krans, 8, (in the left sled) join Jeremy, 6, June, 4, and Timothy Krans as the kids form a train down the sledding hill at Neshobe Golf Club in Brandon on Monday afternoon. Alisha Krans watches out for the whole flock of children on a day off school.

The rising death toll reported Tuesday is greater than the population of New Orleans, Cleveland or Tampa, Florida. A8

The Fair Haven boys and girls basketball teams are looking to repeat as Division II champions this season. B1

Storage crops harvested in the fall are kept cool and fresh all winter. Homesteaders would store tubers in root cellars and as everyone knows, roots rock stock pots. B6