David Allaire won a third term as mayor of Rutland Tuesday, finishing at the head of the largest pack in city history.

According to unofficial results from the city clerk’s office, Allaire took 1,356 votes, coming in ahead of the strongest of his six challengers, Alderman Chris Ettori, who finished with 1,018.

None of the other challengers came close. Alderman Sam Gorruso, a late entry into the race, finished third with 561 and political newcomer Matthew Godnick Seager came in fourth with 481.

Allaire ran on his record and said Tuesday night that his record carried him through.

“I think this reaffirms that people are satisfied with the way the city is going and my leadership,” Allaire said.

Allaire said he was unfazed by the fact that he did not win a clear majority.

“It’s always going to happen with a field this big,” he said. “I’m absolutely elated at the results and grateful to the voters of the city.”

Allaire said he was surprised at the relatively low turnout, though he said he expected the cold weather was a factor.

“Traditionally, higher turnouts are when the city’s embroiled in some sort of ruckus,” he said. “This tells me, for the most part, people are pretty happy with the way things are going. They could always be better, and we’re going to work on that.”

Ettori, who offered a variety of plans for economic development in the city, said he came close, but “not close enough.”

“Obviously, I’m disappointed that I didn’t win, but the mayor has been in politics for 20 years, has developed a strong and loyal following, and they came out and supported him,” he said.

Ettori said it would have been “a different sort of race” with a narrower field.

“With just me and Dave, it would have been more of a conversation about my vision versus his vision,” he said. “In the end, I made my case for the office and a number of people didn’t want to leave Dave for my vision.”

Fifth-place went to Kathleen Krevetsky, who won 63 votes with her vision of centering the city’s development efforts on food. Marge Johnston finished ahead of her son, Kam Johnston, despite not actually campaigning. Kam Johnston said he was acting as his mother’s media adviser and that she would not participate in any interviews or forums. Marge Johnston took 16 votes while Kam Johnston got 10.

The Board of Aldermen has four new members, but it was unclear who one of them was Tuesday night.

On a night that David Allaire retained the mayor’s office, Katie Langlois became the new city assessor and the budget passed, the 17-person race for six seats appeared to show a tie for sixth place as the results were tallied. City Clerk Henry Heck said he was unsure how to resolve it.

“We would have to do a recount,” Heck said shortly after adding up results from the city’s four wards. “What that means is ... I’ll have to investigate with the secretary of state in the morning. ... I’ve never had a tie before. It’ll be interesting.”

The sixth seat remained in question, with John Atwood and Thomas Franco coming in behind Doenges with 1,122 votes.

Franco and Atwood — along with Savage, Neary and Doenges — were part of a slate of like-minded calling themselves “Rutland Forward.” Franco said whether he joins the board or not, he’s glad to see so many of his compatriots succeed.

“Whether he gets that sixth seat or me, Rutland will be in good hands,” he said.

“It’s a win for Rutland,” he said. “It’s a solid showing for everyone and whether I serve on the board or serve in some other capacity, I will be happy to serve.”

Rick Battles fell short of contention with 1.034 and former Alderman Matthew Reveal failed in his effort to return to the board, only garnering 971 votes.

Alderwoman Rebecca Mattis will not return to the board this year. She came in behind Reveal with 965 votes. It is the second year in a row the city voted out an incumbent, something that had not happened for more than decade prior to last year. David O’Brien took 937 votes, followed by John Cioffi Jr. with 895. Robert “Buddy” Miles took 870, Matthew Merritt got 855 and Russell Glitman got 853.

Far in the back were Kam Johnston — who also lost his bids for mayor, city assessor, city treasurer and school commissioner — with 210 votes and Chad Snyder-DeAngelis with 141.

Elsewhere on the ballot, Katie Langlois finished well at the head of the seven-person pack running for city assessor. Langlois took a decisive 1,498 votes, ahead of the 805 for former Alderman Gregory Thayer and the 420 for former Fair Haven lister Melinda Eaton. Fourth place went to Michel Messier with 287 votes. Kam Johnston got 86 votes and his mother, Marge Johnston, got 73 while C.C. Wiegel trailed with 29.

Despite efforts to scuttle it, voters showed their support for the Rutland City Public Schools budget this Town Meeting Day.

While the budget is down around $800,000 from the current year, spending per equalized pupil is up 6.7%.

The vote caps off several months of contentious community debate following the board’s decisions to retire the Raider name and arrowhead logo last October and officially adopt the Ravens as the district’s new mascot last month.

The budget became a target for those upset over the board’s decision. According to Board Chairwoman Alison Notte in an interview last month, the budget contains no new money for mascot rebranding. She explained the board has yet to establish a “formalized process” for the change and would be “working within the existing budget for this year or through just the natural process of replacing uniforms and such.”

Nonetheless, on Facebook, a vocal movement of Raider defenders — including both city residents and nonresidents — called on voters to reject the budget, as well as elect a slate of School Board candidates who favored reinstating the Raider name and arrowhead.

Superintendent Bill Olsen said he appreciated the support of the Rutland community during a year made especially challenging due to the pandemic.

“We expect that the next school year will be just as challenging as we adjust to ever-changing conditions in the pandemic, and as we help students overcome this difficult time in their lives,” he wrote in an email Tuesday night. “We know that strong schools benefit our students and their families. They also benefit our whole community.”

Notte said she was pleased to hear the budget passed in light of the campaign against it.

But while the budget was approved, the Raider slate carried the day in the race for school commissioner, where three seats were in play.

Throughout the mascot debate, Seward had positioned herself as a voice of compromise, calling for the board to retire the arrowhead, but keep the Raider name.

“I’m just appreciative that the city is putting me in again to be able to help the students and the teachers and keep doing the job I’ve been doing,” said Seward, who was the second highest vote-getter with 1,510 votes.

While campaigning, O’Connor and Stoodley both cited the name-change as motivations for running. Now victorious, both said they are ready to get to work for the district.

“I’m very excited to do what I wanted to do, which is to get the board back on track and really focused on our children, our staff and our community,” O’Connor said, who came out on top of the field of seven candidates with 1,572 votes.

Stoodley, who came in third with 1,459 votes, said she hopes the community can work to heal the divide that the mascot issue created.

“I am just happy that the community came out to show that their voice needed to be heard,” she said.

Regarding the matter of reversing the mascot decision, all three winners said they would want to discuss it with their fellow commissioners before commenting on next steps.

Notte said she welcomed the new commissioners to the board and expressed hope that they would “become an engaged with all aspects of the board and the school district.”

“I think it’ll definitely be a challenge,” she said. “Hopefully, they can get up to speed with issues that don’t revolve around the mascots.” 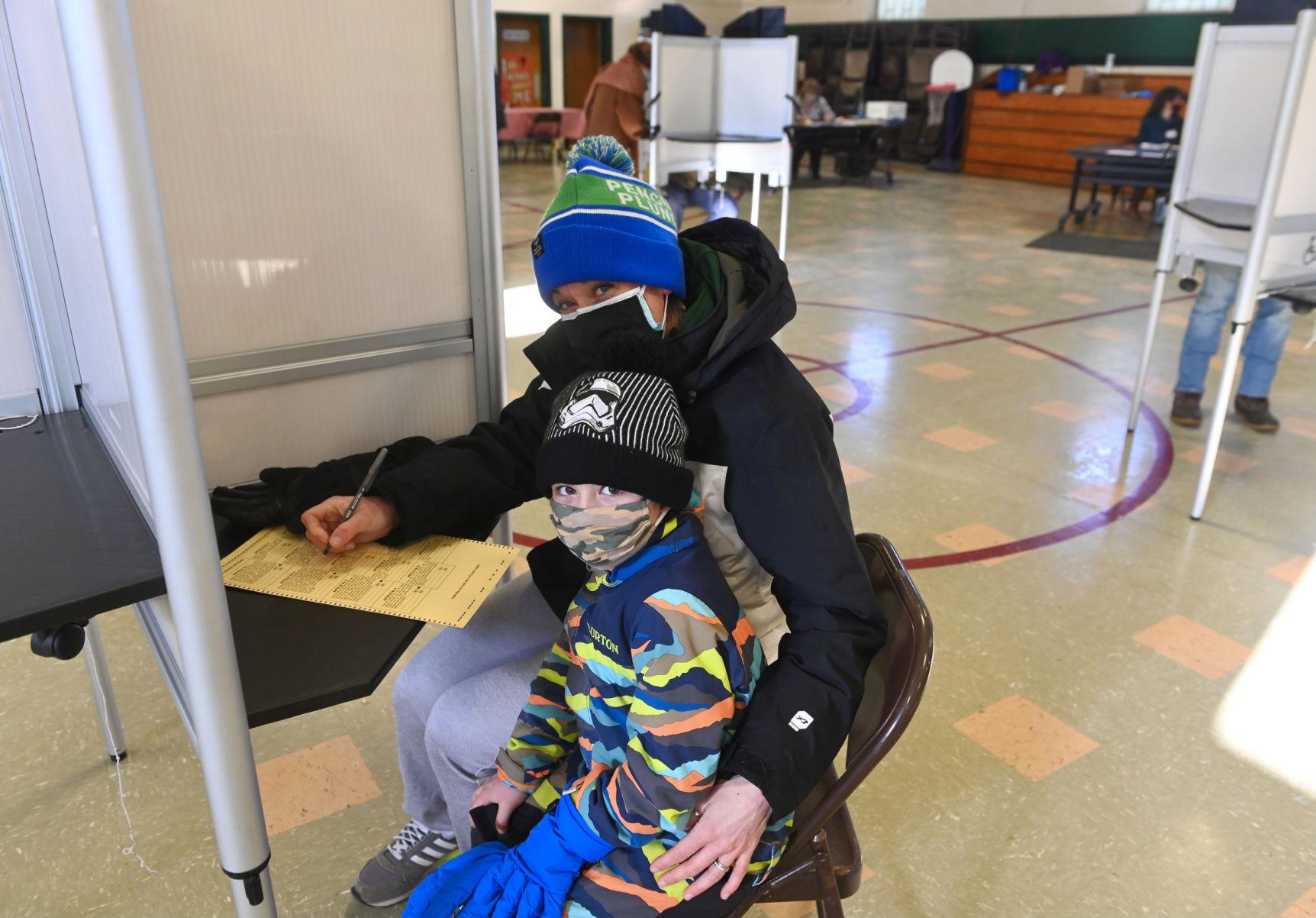 Southern Vermont League Executive Director Tim Brown has loved how SVL teams have worked together during COVID times. B2

See more stories and town meeting election results from around Rutland County and the region, inside. A3, A5