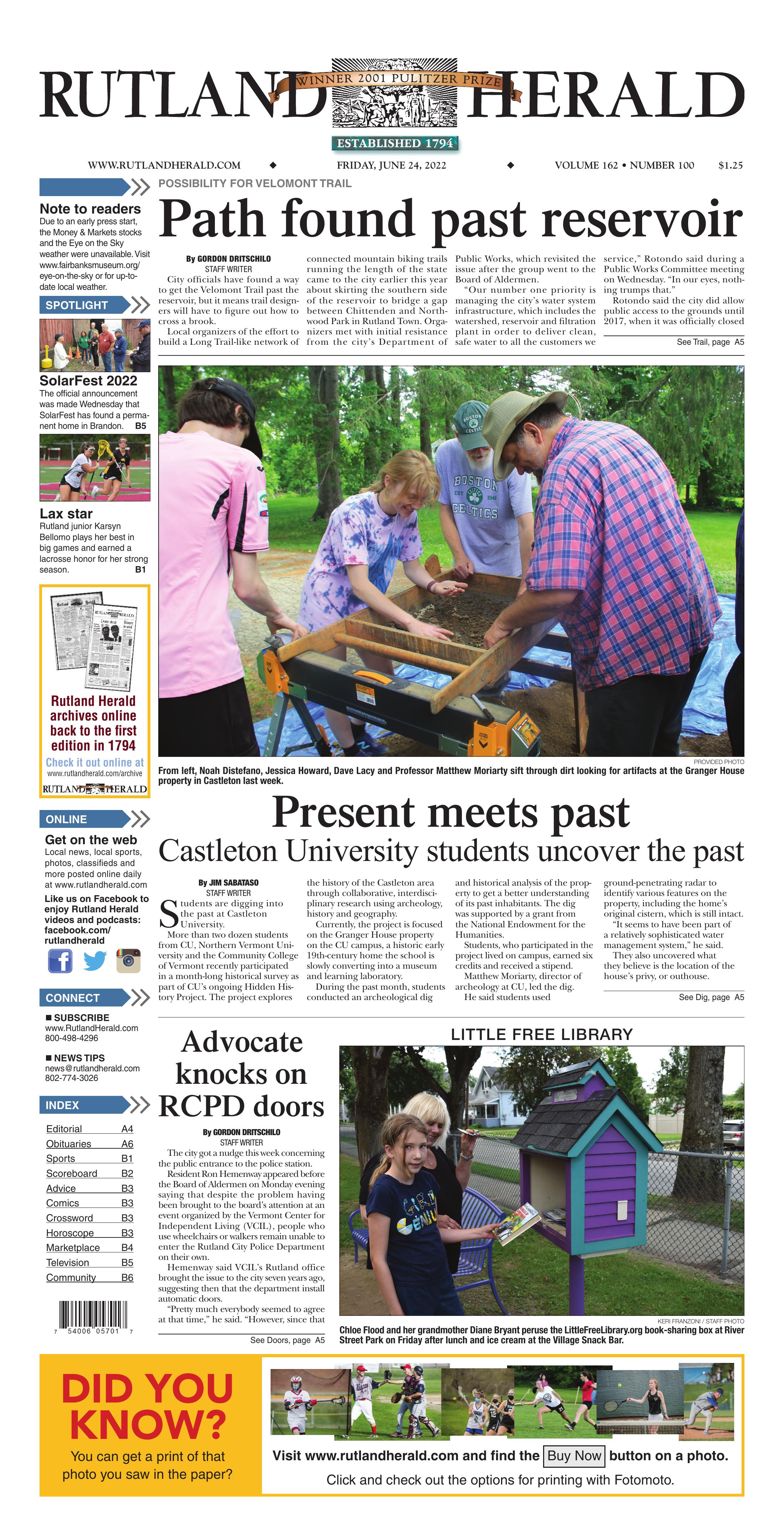 City officials have found a way to get the Velomont Trail past the reservoir, but it means trail designers will have to figure out how to cross a brook.

Local organizers of the effort to build a Long Trail-like network of connected mountain biking trails running the length of the state came to the city earlier this year about skirting the southern side of the reservoir to bridge a gap between Chittenden and Northwood Park in Rutland Town. Organizers met with initial resistance from the city’s Department of Public Works, which revisited the issue after the group went to the Board of Aldermen.

“Our number one priority is managing the city’s water system infrastructure, which includes the watershed, reservoir and filtration plant in order to deliver clean, safe water to all the customers we service,” Rotondo said during a Public Works Committee meeting on Wednesday. “In our eyes, nothing trumps that.”

Rotondo said the city did allow public access to the grounds until 2017, when it was officially closed to all uses.

“One of the issues that contributed to this decision was the fact that an increase in careless and risky behavior was observed by people who frequent the property,” Rotondo said. “It just got out of hand. There were a lot of dogs, a lot of pets. ... The property was just being littered with used waste bags.”

Rotondo said security cameras even caught one person bathing dogs right at the entry point for the intake system.

“That was unacceptable,” he said.

Despite those indiscretions, Rotondo said he had found a way to run a trail through the property without coming unacceptably close to the reservoir.

He said following Town Highway 10 could get them to the property north of Mendon Brook, and then a bridge over the brook would connect them to the existing trails in Northwood Park.

“It looks like that’s a very doable trail,” he said. “It’s away from our sensitive areas.”

Also, it was downstream from the intakes so any contamination would not affect the city’s water supply, he said.

“This could work,” said Andrew Shinn, president of the Pine Hill Partnership, and one of the local Velomont organizers. “The big challenge is the bridge. ... That’s an expensive thing.”

Board of Aldermen member Devon Neary asked whether other bridges had been proposed on the Velomont.

Shelley Lutz, another of the organizers, responded that there had to be, but acknowledged she had not heard any discussed yet.

“There’s likely to be a lot of short, wooden bridges,” Shinn said. “Going over the creek — that’s not going to be a short wooden bridge.”

Lutz asked whether there might be away across the nearby Glen Dam, but nobody at the meeting had an answer.

Others noted they would have to get across East Creek to get there, so such a route might not help.

Shinn asked whether they could build a suspension bridge.

“We could probably do anything,” Lutz replied.

Lutz thanked city officials for coming up with a solution.

The issue remains in committee while the Velomont organizers look at the terrain and consider crossing options.

Local
Students uncover the past in Castleton
Provided Photo

Students are digging into the past at Castleton University.

More than two dozen students from CU, Northern Vermont University and the Community College of Vermont recently participated in a month-long historical survey as part of CU’s ongoing Hidden History Project. The project explores the history of the Castleton area through collaborative, interdisciplinary research using archeology, history and geography.

Currently, the project is focused on the Granger House property on the CU campus, a historic early 19th-century home the school is slowly converting into a museum and learning laboratory.

During the past month, students conducted an archeological dig and historical analysis of the property to get a better understanding of its past inhabitants. The dig was supported by a grant from the National Endowment for the Humanities.

Students, who participated in the project lived on campus, earned six credits and received a stipend.

Matthew Moriarty, director of archeology at CU, led the dig.

He said students used ground-penetrating radar to identify various features on the property, including the home’s original cistern, which is still intact.

“It seems to have been part of a relatively sophisticated water management system,” he said.

They also uncovered what they believe is the location of the house’s privy, or outhouse.

Moriarty called privies “time capsules,” noting they were more than simply outdoor bathrooms — they were places where people would dispose of household garbage.

“All of that should be super useful when it comes to reconstructing the lives of the people who lived in the house,” he said.

He explained that understanding what kind of food was consumed and trash was produced can give a fuller picture of the everyday lives of the home’s inhabitants than archival information.

Moriarty said students will also use 3D imaging and printing technology this summer to replicate artifacts found on the property, such as plates.

As part of their work, students visited the Vermont State Archives in Middlesex, where they discovered probate records for the house’s original owner, Noahdiah Granger, and its second owner, Judge Almon Warner.

“With those records we were able to get a good sense of the possessions they would have had,” he said, adding some of the records were even itemized by room.

Fleche said students also investigated the claim that the house was part of the Underground Railroad.

While he said they were unable to find definitive evidence, they didn’t rule it out.

“We did learn that Judge Warner was a member of the Whig and then the Republican Party, so he would have at least been opposed to the expansion of slavery,” he said.

Fleche said he was pleasantly surprised by how much information students were able to uncover. He noted all the house’s owners were fairly prominent individuals, which likely contributed to how much they appeared in the historical record.

“I think that we were able to find more than would be typical for 19th-century Vermonters,” he said.

Moriarty said the interdisciplinary nature of the project allowed students to explore the property from a variety of angles during the course.

“One of the things that we observed as faculty members is that the students were spectacularly engaged in the project,” he said.

He said projects such as Hidden History were useful opportunities for students to explore different academic areas that might interest them without making a semester-long commitment.

He said the project also provided a model for creating community across campuses as CU, NVU and Vermont Technical College transition to a singular academic institution in the coming months.

“The idea of having a place-based program that students from across what eventually will be Vermont State University come together and work together I think is a potentially powerful way to build those academic communities,” he said.

He said the student expectations for higher education have shifted in recent years — some are seeking a purely online experience while others still want face-to-face instruction. He said unification under the VTSU model will allow the institution to better serve students by delivering courses in a variety of modalities.

“This applied learning brings people together, face-to-face. It’s hands-on, there’s no doubt about it,” he said. “Students could taking a course online or in person, but when they come together in this type of experience, they really make some wonderful connections.”

Ouimet added compensating students for participating in the project increases access to learning.

“They’re earning some money, which gets at that access and equity piece that’s so challenging because, oftentimes, these experiences are out there, but students can’t be paid for it,” he said. “It really eliminates a whole segment of the population who need to be working during the summer, whether it’s to support their families or to save for college themselves.” 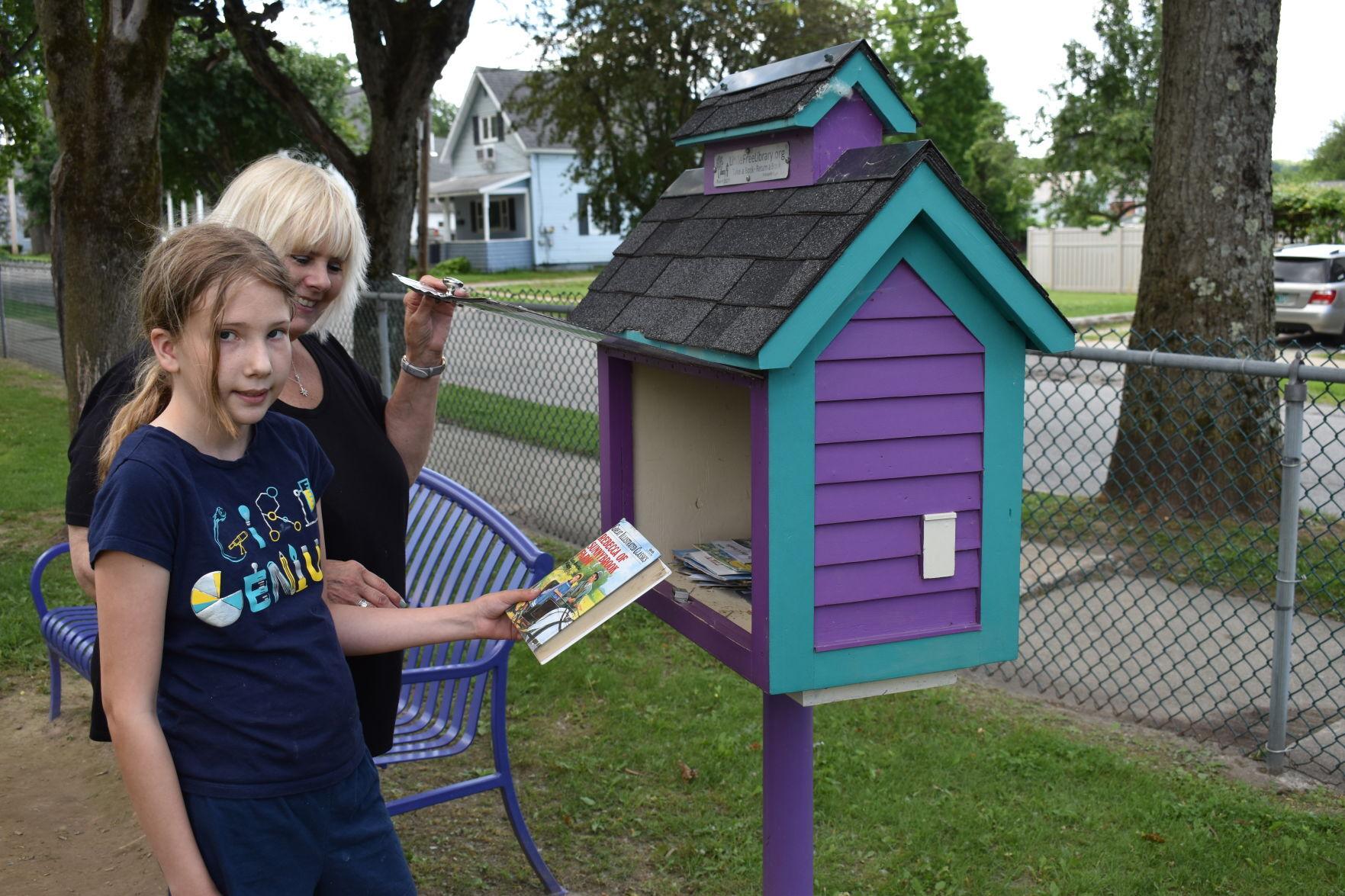 Chloe Flood and her grandmother Diane Bryant peruse the LittleFreeLibrary.org book-sharing box at River Street Park on Friday after lunch and ice cream at the Village Snack Bar.

The city got a nudge this week concerning the public entrance to the police station.

Resident Ron Hemenway appeared before the Board of Aldermen on Monday evening saying that despite the problem having been brought to the board’s attention at an event organized by the Vermont Center for Independent Living (VCIL), people who use wheelchairs or walkers remain unable to enter the Rutland City Police Department on their own.

Hemenway said VCIL’s Rutland office brought the issue to the city seven years ago, suggesting then that the department install automatic doors.

“Pretty much everybody seemed to agree at that time,” he said. “However, since that time, nothing seems to have happened or changed.”

Hemenway said it was also brought up in the CAIR Committee — the municipal body that looks at accessibility issues in the city — but that the group had not met for several months.

On top of that, he said meetings of the Police Commission and Traffic Safety Committee held at the police station could place Rutland in violation of the state’s Open Meeting Law because of the accessibility issues.

“How are people supposed to participate in these committees if they are not able to get into there?” he asked.

Hemenway acknowledged that automatic doors were expensive, but said incremental changes in the facility could make a significant difference.

Hemenway asked that the city apply some of its COVID stimulus money toward replacing the doors.

Board member Chris Ettori said accessibility improvements at the police station was one of the projects suggested for funding through the stimulus money and still was pending in the city’s Finance Committee.

Board member Devon Neary noted that the chronic understaffing at the police department has resulted in a sizable surplus in the department’s budget. He said it was put at roughly $1 million at a Finance Committee meeting in March, though, the board then voted to spend about a quarter of that on $10,000 retention bonuses for each officer.

Neary asked whether the surplus could be applied toward the doors.

Police Chief Brian Kilcullen said he was unsure about the rules for spending the surplus, but that the money was there.

No action was taken by the city board on Monday.

The official announcement was made Wednesday that SolarFest has found a permanent home in Brandon. B5

Rutland junior Karsyn Bellomo plays her best in big games and earned a lacrosse honor for her strong season. B1