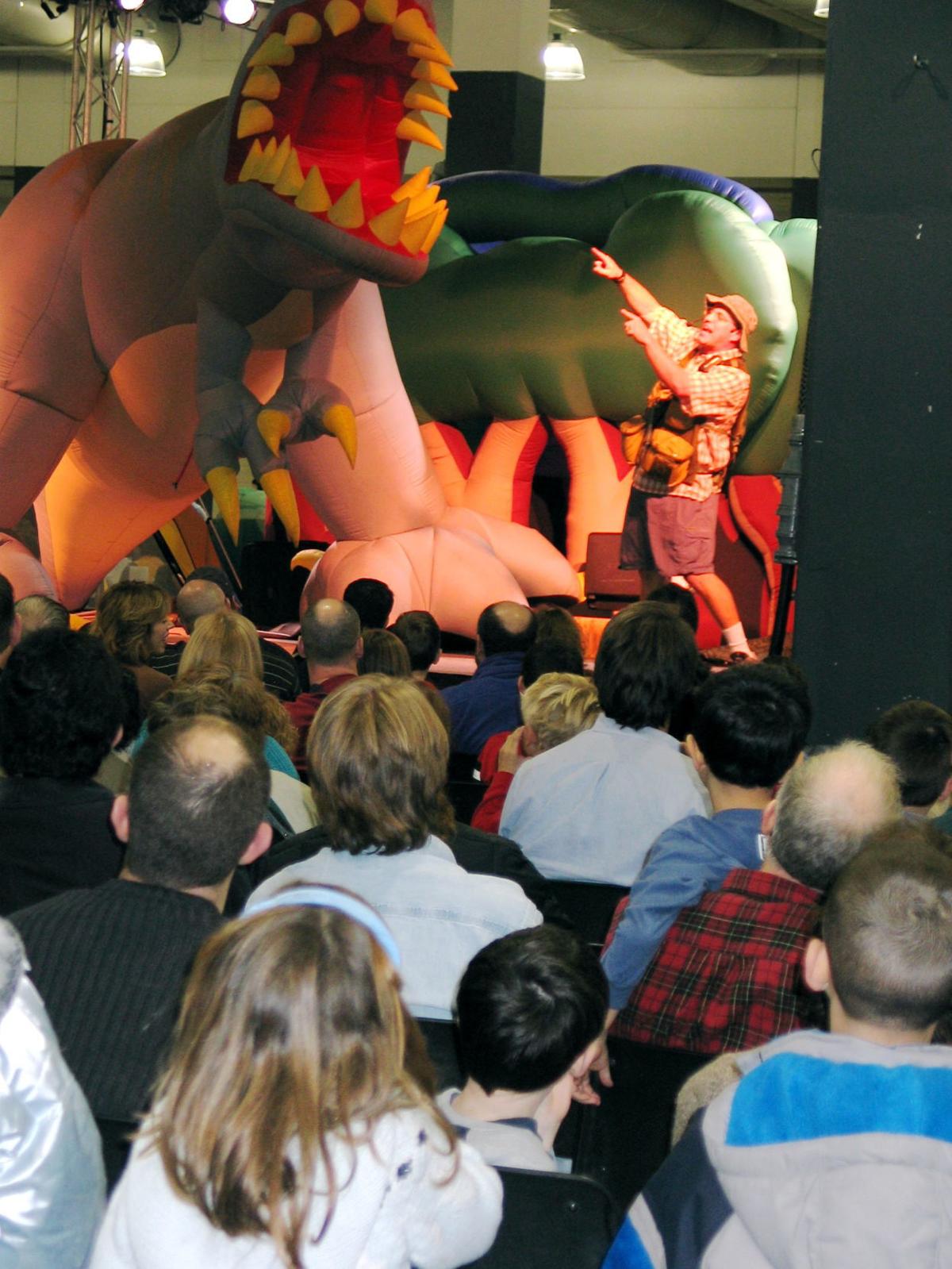 Bob Lisaius brings his “Dinoman Dinosaurs” to Brandon Town Hall on May 19. 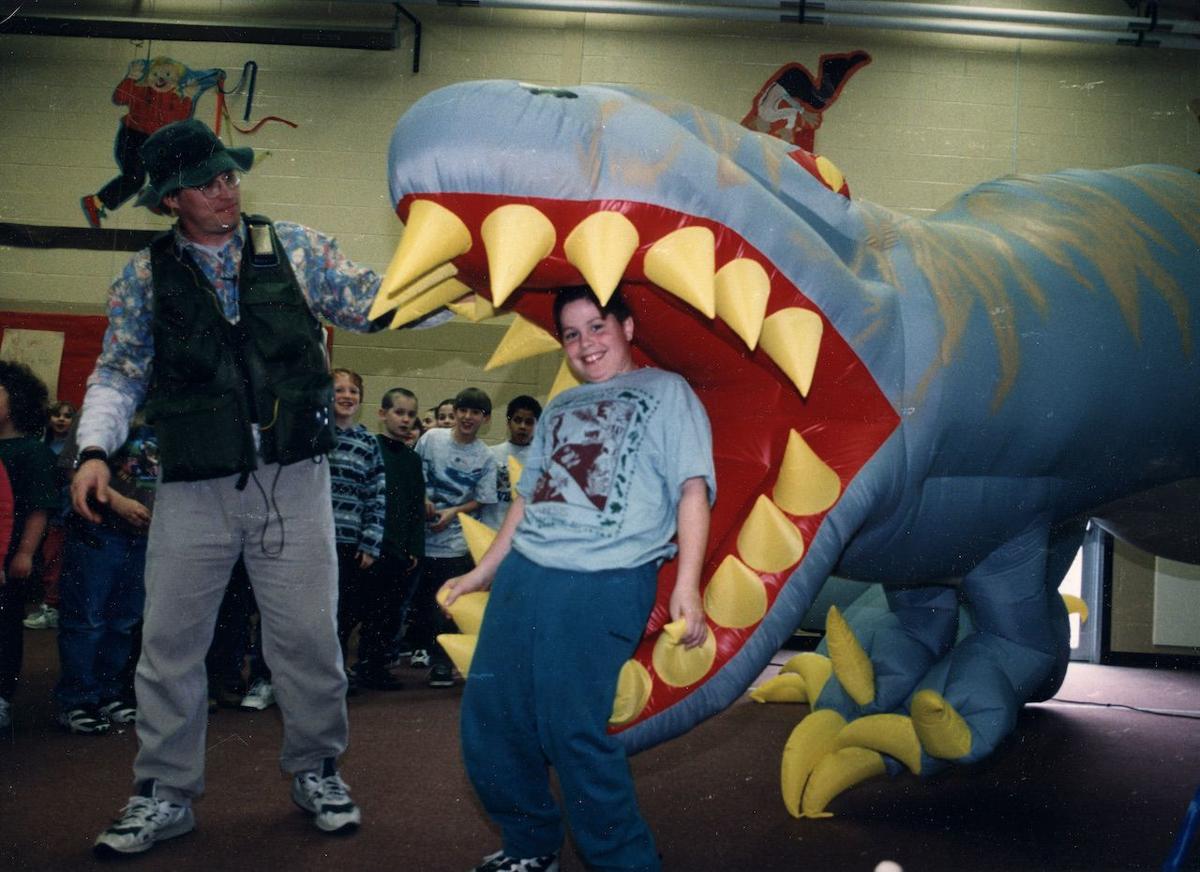 “Dinoman Dinosaurs” are friendly but they seem to like eating children.

Bob Lisaius brings his “Dinoman Dinosaurs” to Brandon Town Hall on May 19.

“Dinoman Dinosaurs” are friendly but they seem to like eating children.

This week, there are dinosaurs, Roald Dahl and mandalas.

Bob Lisaius says he found dinosaur tracks in the woods near his house when he was 11 years old.

“Ever since then I have truly loved dinosaurs,” he said by phone last week. “I’m 60 years old, it’s hard for me to say that but it’s true.”

Lisaius has a contagious enthusiasm for what he does, and he travels the country with his one-man show, “Dinoman Dinosaurs,” which will be at Brandon Town Hall from 4 to 5 p.m. Sunday, May 19.

The all-ages show has been going for 20 years now, was named a “Best Bet” by the LA Times, and this summer will travel from Vermont to Virginia and back for a total of 163 shows.

He spends six weeks out of the year hand-sewing the giant dinosaurs that appear in his show, which is all about how we know dinosaurs were really here, what fossils are, and how they’re formed.

“The show stands by itself. If you’re not interested in the science, it doesn’t matter, you’ll still have a good time,” Lisaius said.

That’s because he’s an entertainer by nature, and theater runs in his blood. Before he started the show, he and his wife ran four theaters in Vermont, including one in Stowe and the Barre Opera House.

“There’s magic in it, and humor,” Lisaius said. “People who think it might be too science-y have the wrong idea. You don’t have to love dinosaurs to love the show.”

Cinderella goes to a disco instead of a ball in Mill River Union High School’s productoin of “Revolting Rhymes,” Roald Dahl’s reinterpretation of familiar fairy tales, which will be presented at 7 p.m. Friday and Saturday, May 10 and 11.

Surprise endings in place of predictable happily-ever-afters is at the heart of these stories, adapted from Dahl’s work, including “Cinderella,” “Jack and the Beanstalk” and “The Three Little Pigs.”

“Roald Dahl can be kind of dark,” drama teacher Peter Bruno said. “So they’re fairy tales but retold in a unique way. We try to stay true to the script and the tone and humor.”

About 15 students are participating, between the cast and crew, some of which Bruno is directing in scenes from the famous stories. The show runs about an hour long and is a chance for people, and especially younger students, “to learn what we do at the high school level, and about technical theater as well as performance,” Bruno said. “It’s a really fun show.”

“Revolting Rhymes” will be presented at 7 p.m. Friday and Saturday, May 10 and 11 at Mill River Union High School, 2321 Middle Road in Clarendon. Admission is $5.

Mandalas naturally draw the eye, with their clean geometric shapes and colorful layers. They’re said to contain wisdom and catalyze healing. Rutland artist Brian Sylvester specializes in mandala paintings, and has a new exhibit at the Rutland Free Library at 10 Court St. through June 1.

“I start off with blank canvas and divide it into quarters, and keep drafting it out and letting it evolve,” he said by phone recently. “I really don’t start with a grand goal in mind, it’s pretty organic how things evolve.”

But color is a big part of the work he does, and a big part of the inspiration behind it, which you can clearly see in the bright blue mural of whales he painted on Center Street. The mandalas on display are meditative pieces, and part of his passion for wellness, which is what brought him from Boston to Rutland.

“When I moved here almost 10 years ago my focus was bringing wellness to the community,” he said. “The art is part of it.”