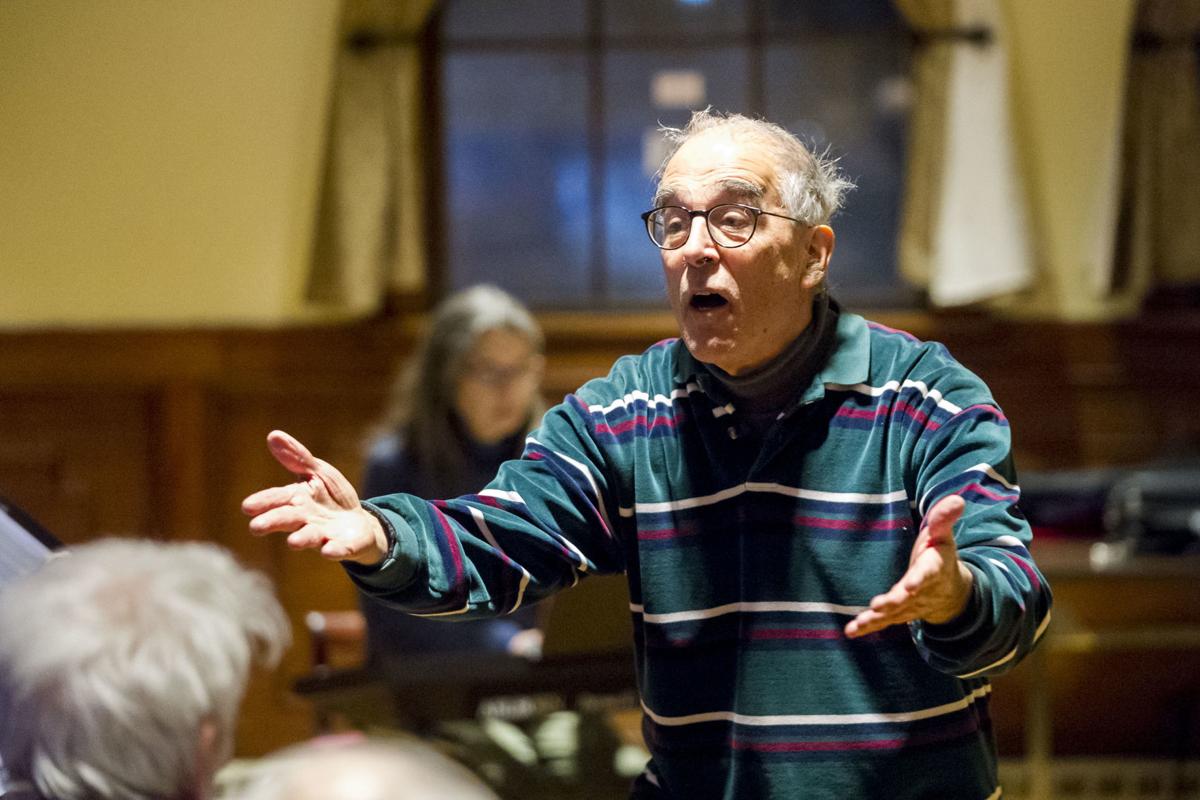 Larry Gordon will lead the 70-voice Onion River Chorus in “A Child is Born: A German Christmas,” Dec. 21 and Dec. 22 in Montpelier. 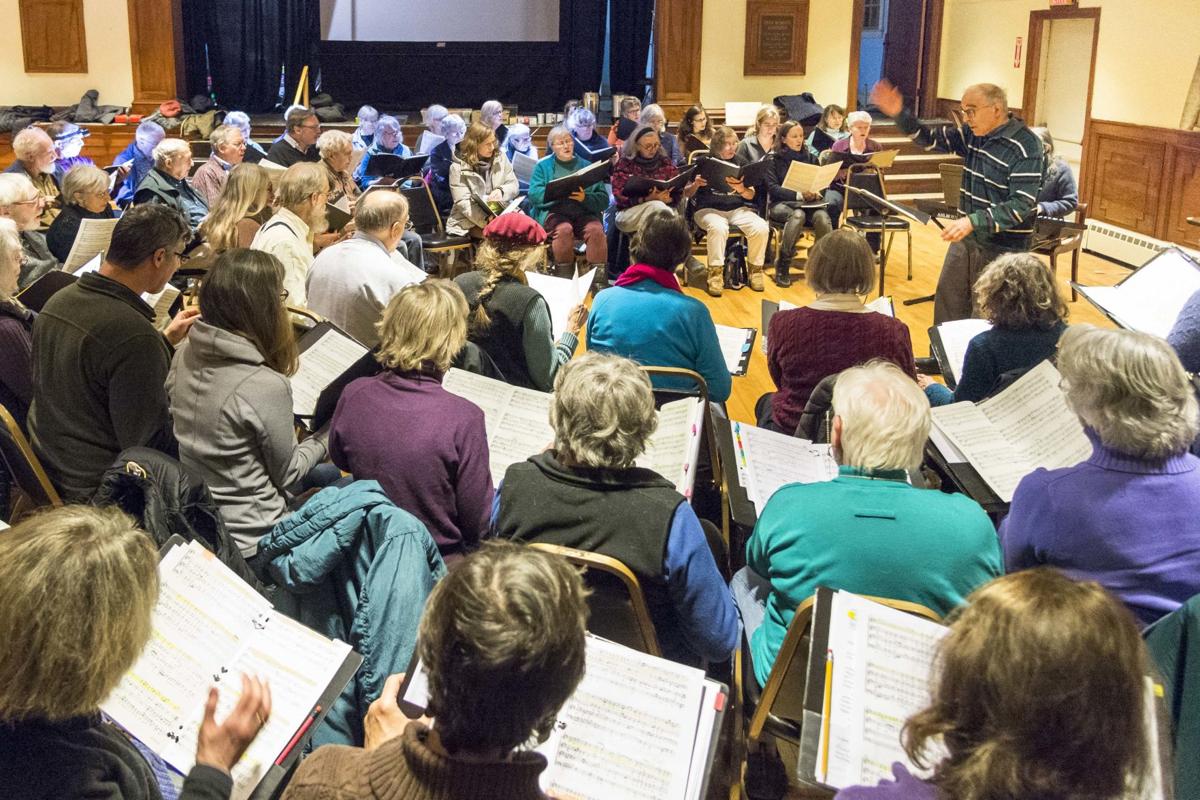 Larry Gordon will lead the 70-voice Onion River Chorus in “A Child is Born: A German Christmas,” Dec. 21 and Dec. 22 in Montpelier.

Although Onion River Chorus’ holiday program, “A Child is Born: A German Christmas,” centers mostly on 17th century music, much of it will be familiar to today’s audiences.

“So much of this program, in fact almost all of it, is pieces based explicitly on or are partially drawn from the Lutheran chorale melodies,” explains Larry Gordon, the community chorus’ longtime director, who is conducting.

“So many of the pieces are re-workings of those melodies which are familiar to people — some of them are standard Christmas carol melodies.”

The Onion River Chorus will perform German Christmas music from the 16th, 17th and 20th centuries, including works by Lassus, Praetorius, Schütz, Schein, Scheidt, J.S. Bach and Hugo Distler. The 70-voice chorus will be accompanied by organ and a quintet of clarinets, horn and trombones.

Performances are at 7:30 p.m. Saturday, Dec. 21 and 4 p.m. Sunday, Dec. 22 at the Unitarian Church of Montpelier. A reception and refreshments follow the Sunday concert.

The works on the program are settings of some of the best-known and beloved Christmas hymns and melodies in their German or Latin variants: “Resonet in laudibus (Let Praise Resound),” “Puer natus in Bethlehem (A Child is Born in Bethlehem),” “Ein Kind is uns geboren (A Child to Us is Born),” “Nun komm, der Heiden Heiland (Now Come, Savior of the Gentiles)” and “Wie schön leuchtet der Morgenstern (How Brightly Beams the Morning Star).”

Although the composers were German, they took much from their Italian antecedents.

“A lot of these German composers, Schütz, Schein and Scheidt in particular, were actually influenced a lot by Gabrielli and, to some extent, Monteverdi,” Gordon said by phone. “Schütz explicitly went and studied with Gabrielli for three years, and Scheidt was very influenced by the Italian influences that were current in Germany at that time. So they picked up a lot of that Italian poly-choral style.”

But, they were writing many of their works in their native German.

“So they’re very much dealing with the inflections of the German language, which is so much different than Italian,” Gordon said. “Bach was influenced by Schütz especially. Of course, Bach was steeped in that same chorale tradition, and a lot of those chorales (in the program) are his own chorales.”

Gordon cited as a favorite Samuel Scheidt’s (1585-1654) “Das alte Jahr vergangen ist (The Old Year is Past).” (This piece is preceded by Bach’s chorale setting of the same text.)

“... Just the way he starts out on this wonderful, lyrical kind of contrapuntal opening, and then he gradually melds into more of a poly-choral back-and-forth kind of alternation between the two choirs,” Gordon said. “It’s more homophonic but he keeps interspersing that with contrapuntal passages. That mixture is really wonderful — it’s really exciting.”

“It’s an amazing piece, in many ways one of the smaller-scale pieces,” Gordon said. “This four-part chorus is without instruments, but it opens so lyrically and contrapuntally, and then it goes into these sections that are just very fanciful and kind of startling. It’s just a really charming piece.”

Schütz is also represented by a massive seven-voice setting of “Der Engel sprach zu den Hirten (The Angel Spoke to the Shepherds)” and a joyous “Hodie Christus natus est (Today Christ is Born).”

The newest pieces on the program are by the early 20th century composer Hugo Distler (1908-1942), who was steeped in these same German chorale melodies and also highly influenced by the music of Schütz.

“Distler is so interesting when he takes those chorale melodies and harmonizes them in such unexpected ways, especially his setting of “Nun komm, der Heiden Heiland (Savior of the Nations, Come).” Gordon said. “It has this alto part that keeps changing from minor to major. It’s almost in a whole different key than the other two parts. It’s really astonishing what he does in a short little piece.”

“He was trying to bring back some of that earlier style of writing,” Gordon said. “He was part of a movement to try and renovate German church music in the early part of the 20th century.”

Michael Praetorius (1571-1621) was steeped in these German chorale melodies, and he returned to them again and again in his compositions. His five-voice setting of “Resonet in laudibus” uses the familiar melody in the top voice with inventive harmonies in the lower voices. His setting of Puer natus begins with a duet of treble voices and then adds an additional harmony part for each successive verse, culminating in six parts, with the melody alternating between the soprano, alto and tenor line. His remarkable Magnificat super Angelus ad Pastores alternates each of the traditional Latin liturgical verses of the Magnificat with folk-like arrangements of six of these traditional Christmas melodies.

The earliest piece on the program is the five-voice setting of “Resonet in laudibus” by Orlandus Lassus (1532-1594), featuring constantly alternating duple and triple rhythms and intricate imitative counterpoint.

The German language, of course, presents a change to an American English-speaking chorus, but Gordon says his singers are doing well with it.

“A fair number of the pieces are in Latin, so those are easier for them,” Gordon said. “Also, some of the pieces have the same text, so they get to repeat them. There are also in the chorus several German speakers, which helps.”

Onion River Chorus, directed by Larry Gordon, presents “A Child is Born: A German Christmas,” music from the 16th, 17th and 20th centuries, at 7:30 p.m. Saturday, Dec. 21 and at 4 p.m. Sunday, Dec. 22 at the Unitarian Church, 130 Main St., Montpelier. Admission is $20, under 18 free, at the door; for information, go online to www.onionriverchorus.org. A reception and refreshments follow the Sunday concert.