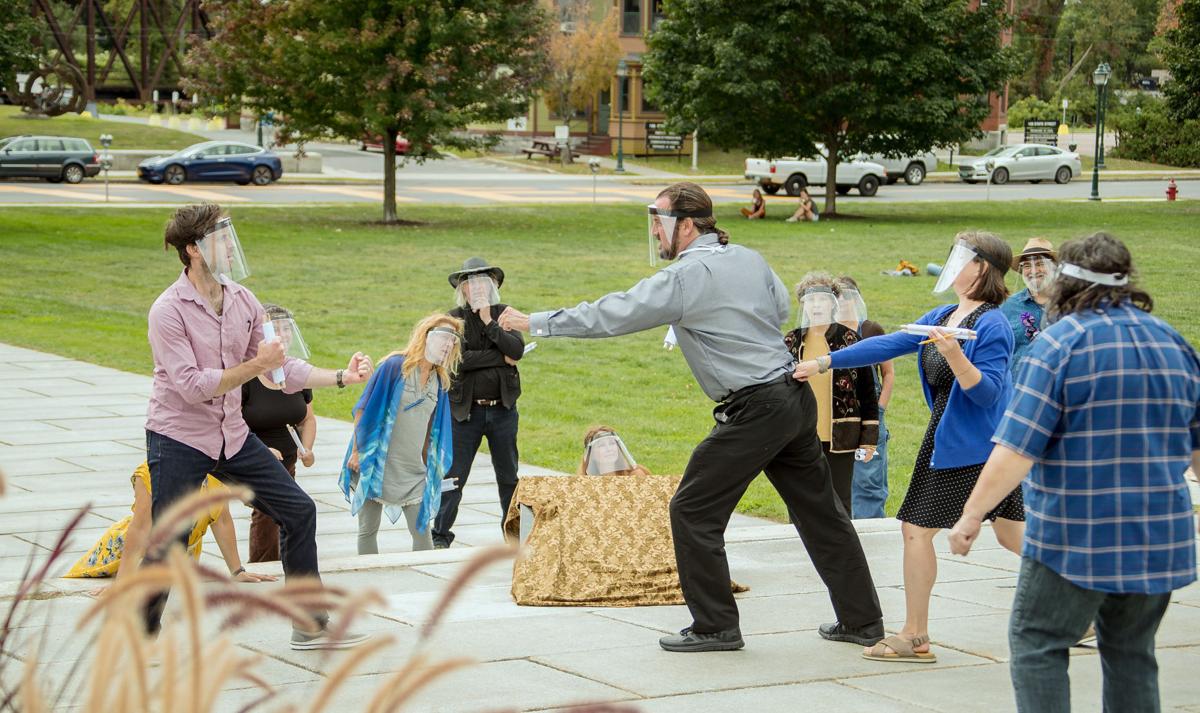 Dominic Spillane as Demetrius, left, and G. Richard Ames as Lysander “duke” it out in rehearsal for Lost Nation Theater’s production of “A Midsummer Night’s Dream,” Sunday outdoors at the Vermont State House. 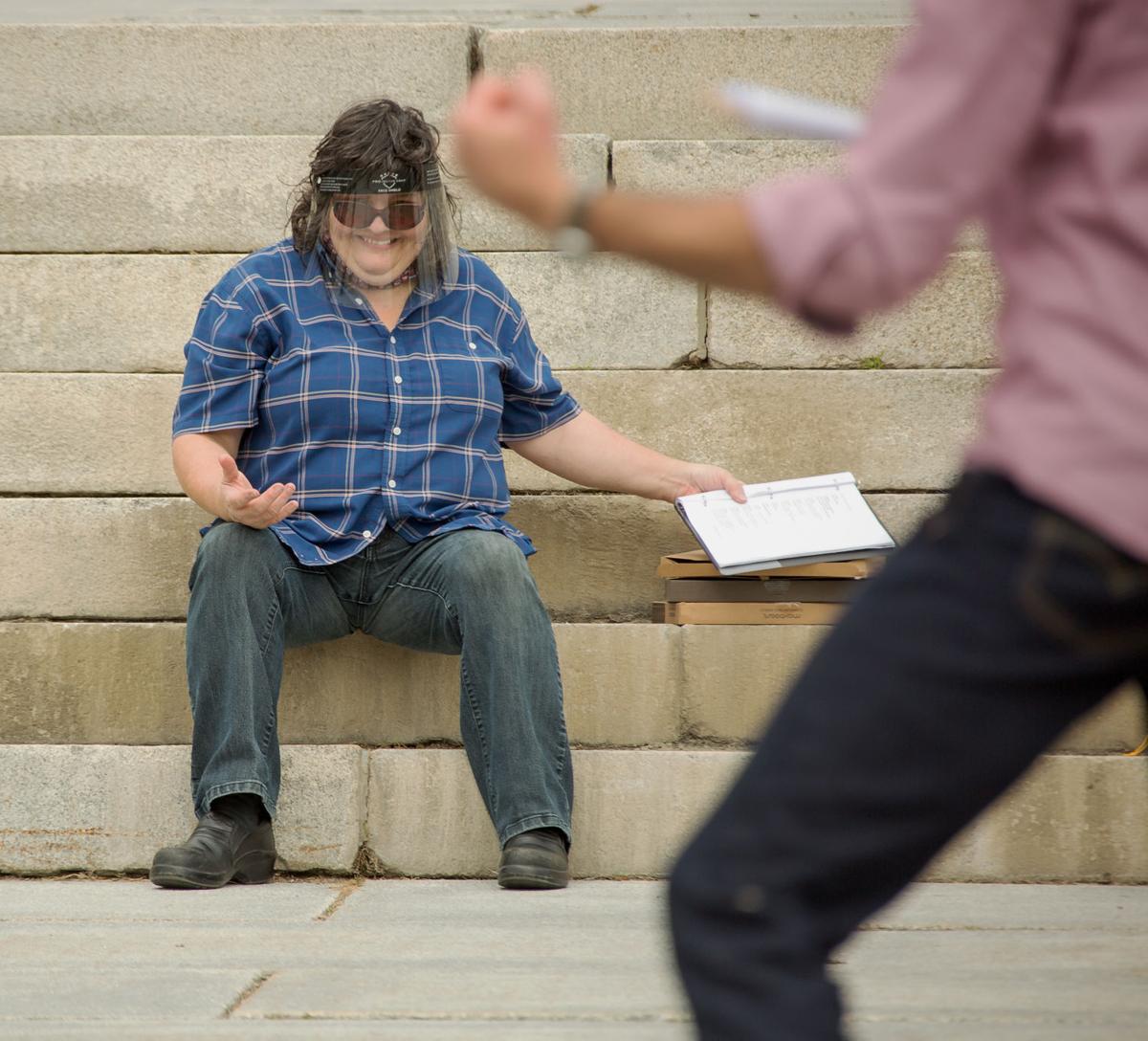 The cast of Lost Nation Theater’s “A Midsummer Night’s Dream” on the Vermont State House steps, where Shakespeare’s comic fantasy will be performed Sunday.

Dominic Spillane as Demetrius, left, and G. Richard Ames as Lysander “duke” it out in rehearsal for Lost Nation Theater’s production of “A Midsummer Night’s Dream,” Sunday outdoors at the Vermont State House.

The cast of Lost Nation Theater’s “A Midsummer Night’s Dream” on the Vermont State House steps, where Shakespeare’s comic fantasy will be performed Sunday.

When Lost Nation Theater decided to re-enter the world of live theater after being shut down by COVID-19, the logical choice was Shakespeare, as this is the 25th anniversary of the Montpelier professional company’s Fall Foliage Shakespeare.

And which Shakespeare? His most beloved comedy of lost lovers, magical fairies and crude mechanicals, the uplifting “A Midsummer Night’s Dream.”

“We couldn’t have picked a more fun piece. It is my favorite play,” explains Ann Harvey, who is directing. She directed “As You Like It” for the first Fall Foliage Shakespeare in 1995.

On Sunday, Lost Nation Theater will present William Shakespeare’s “A Midsummer Night’s Dream,” in an 80-minute (no intermission) staged reading in front of the Vermont State House steps, at 2 p.m. All 17 professional actors, as well as production staff, are donating their services. And admission is free (but donations will be accepted).

“We want this to be completely and utterly fun,” Harvey said.

The project was borne out of a certain amount of desperation at Lost Nation Theater.

“Our whole loves were completely upended — our entire way of life went away,” Kathleen Keenan, the company’s producing artistic director, said. “We did have a few successful online mini-readings and conversations about shows that we were supposed to be doing, and it reignited the flame. But online wasn’t doing it.”

At about that time, Harvey met with Keenan and Kim Bent, Lost Nations founding artistic directors, and the idea of outdoor Shakespeare came up.

“When we first put the word out, we must have had at least 40 actors respond, ‘Yes, I’m in!’” Keenan said. “When we had our first rehearsal, it really felt like a miracle.”

Of course, COVID-19 restrictions had to be met. To keep the actors safe, they will be wearing clear face shields. And the audience will be required to wear masks and socially distance.

Harvey, a veteran Shakespearean, subscribes to the First Folio method, based on “Mr. William Shakespeare’s Comedies, Histories & Tragedies,” a 1623 collection of the Bard’s plays. She finds the original punctuations, articulation and other seemingly idiosyncratic markings read like a musical score. (The First Folio edition of “A Midsummer Night’s Dream” can be found online at internetshakespeare.uvic.ca/doc/MND_F1/)

“The main thing is the punctuation,” Harvey said. “There are far fewer periods; there are far fewer full stops of any sort — questions or exclamations — so you have to tie your thoughts together, and it just keeps you moving. To me, any time you have a full stop, some part of you has to start all over again and rev up.

“Modern editions are easier to read, but they’re not easier to act,” Harvey said. “As far as the acting goes, it informs the choices more specifically. Everything I’m doing as a director is punctuated. Colons mean something to me as a director: It means that there is some sort of change or shift. Of course this is only a staged reading, but everything I can do is in service of the language and the relationships.”

On top of that, for Harvey, the speech must sound natural to be effective.

“If it doesn’t sound conversational doesn’t work,” Harvey said. “To my mind, working on Shakespeare in any form is about leading the audience through by the ear.”

Although this is a staged reading, the actors will not be carrying scripts.

“We’re actually going to be using scrolls that the audience wouldn’t necessarily be seeing (in Shakespeare’s day), but they will be seeing them in this,” Harvey said. “So they’re not carrying books, they’re carrying scrolls — like little mini-teleprompters.”

Bent, a venerable Vermont actor, director and producer, goes straight to the point.

“Anytime you get the opportunity to see Shakespeare outside in the sunshine, you should take it because that’s how it was meant to be seen.”

Lost Nation Theater presents William Shakespeare’s “A Midsummer Night’s Dream,” in staged reading in front of the Vermont State House steps, at 2 p.m. Sunday, Sept. 20. Audience members are asked to bring their own cushions or chairs (seating will also be on the steps) and to adhere to social distancing guidelines and wear a mask. Admission is free (donations will be gratefully accepted); for information, go online to www.lostnationtheater.org