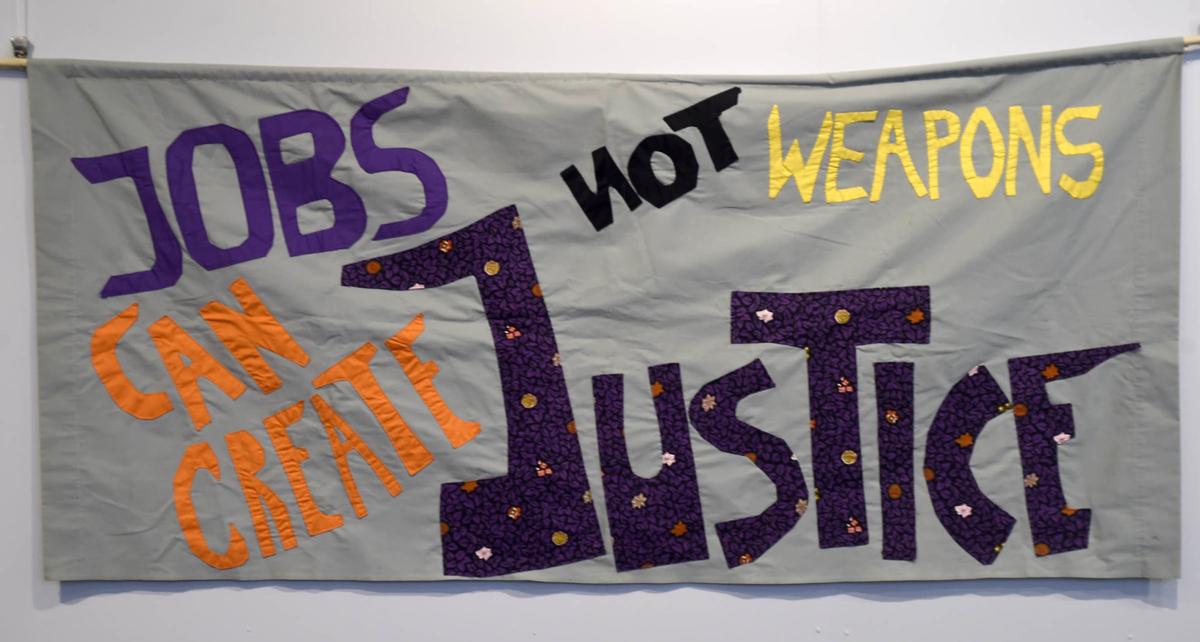 “Tell Me What’s Really Going on,” social justice/injustice in the world through the works of multiple artists and media, at Montpelier’s T.W. Wood Gallery. 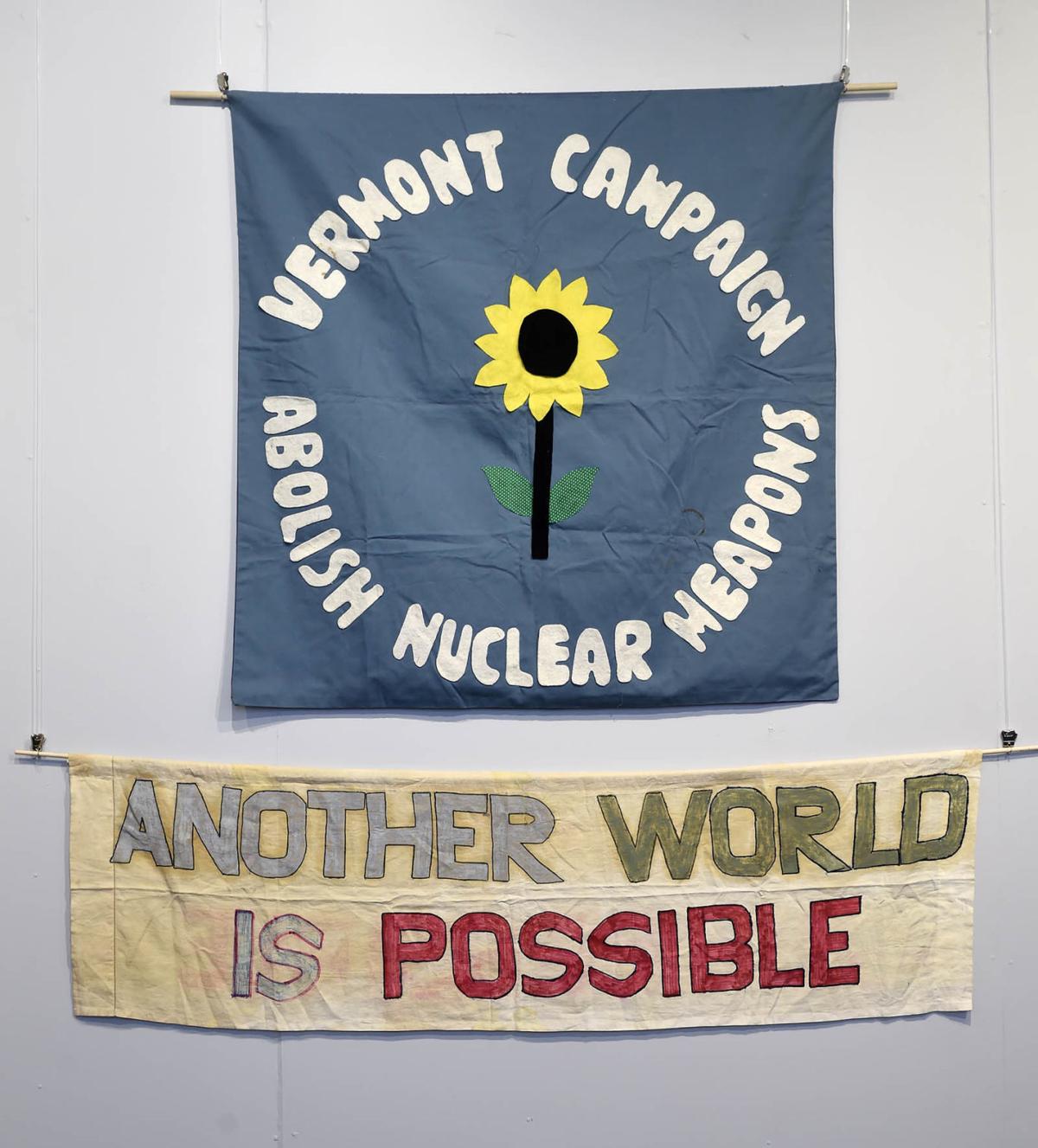 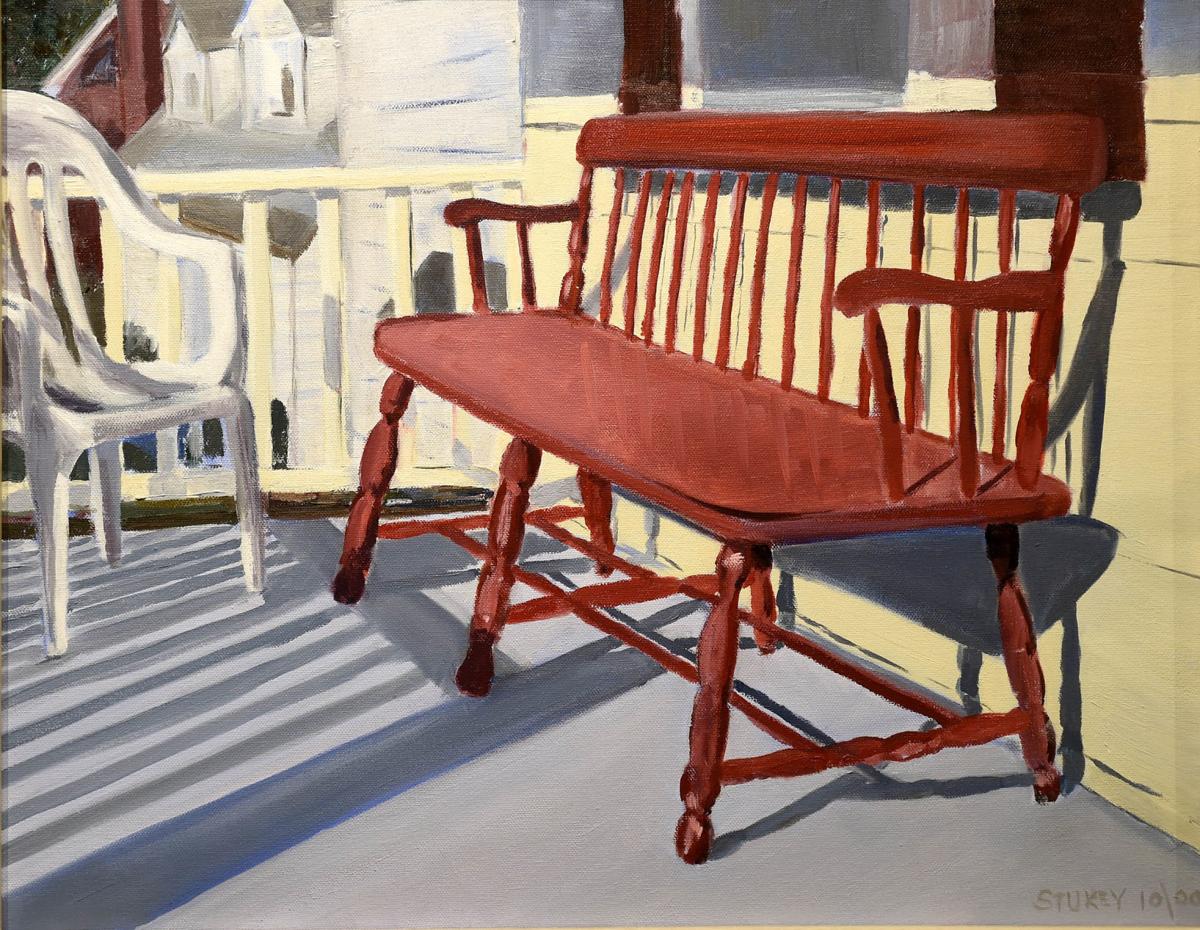 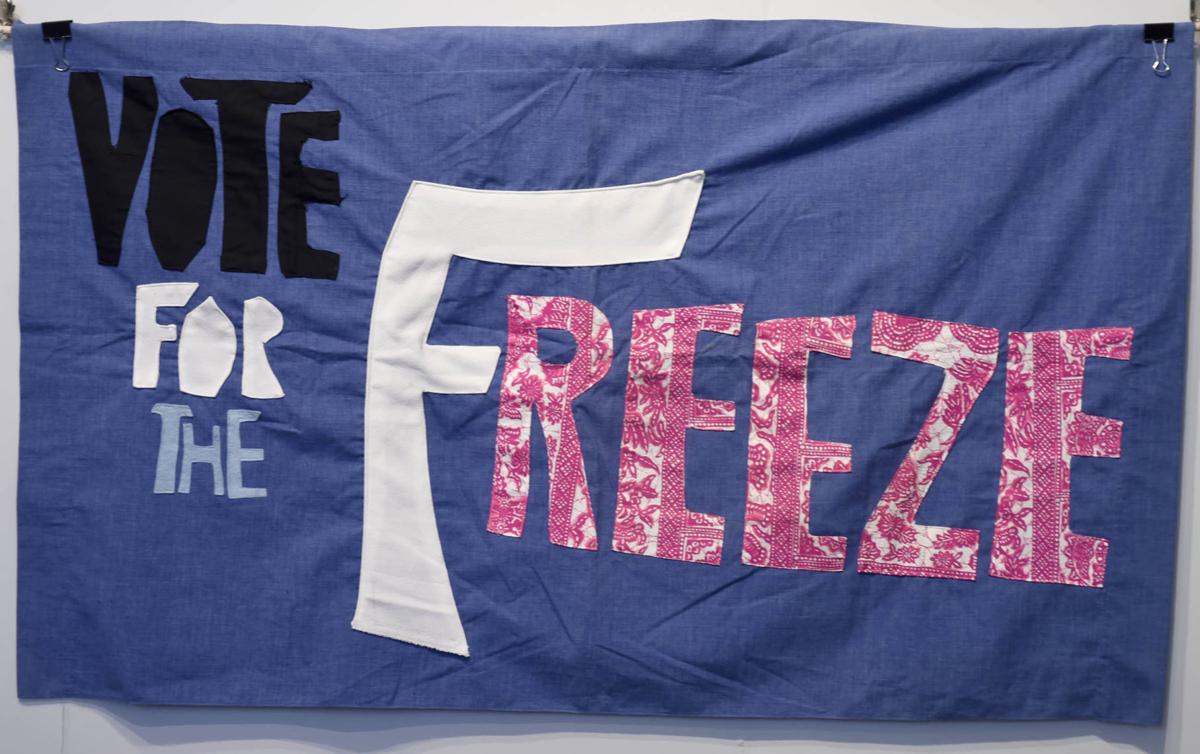 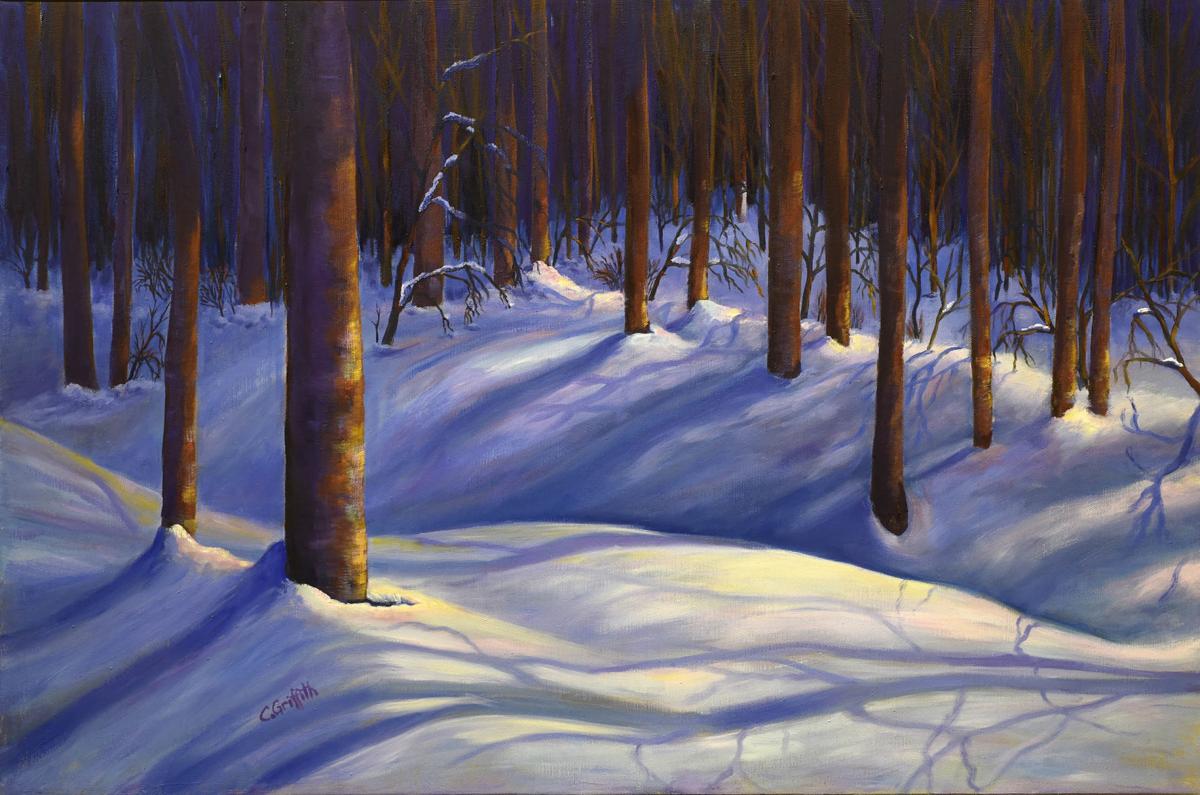 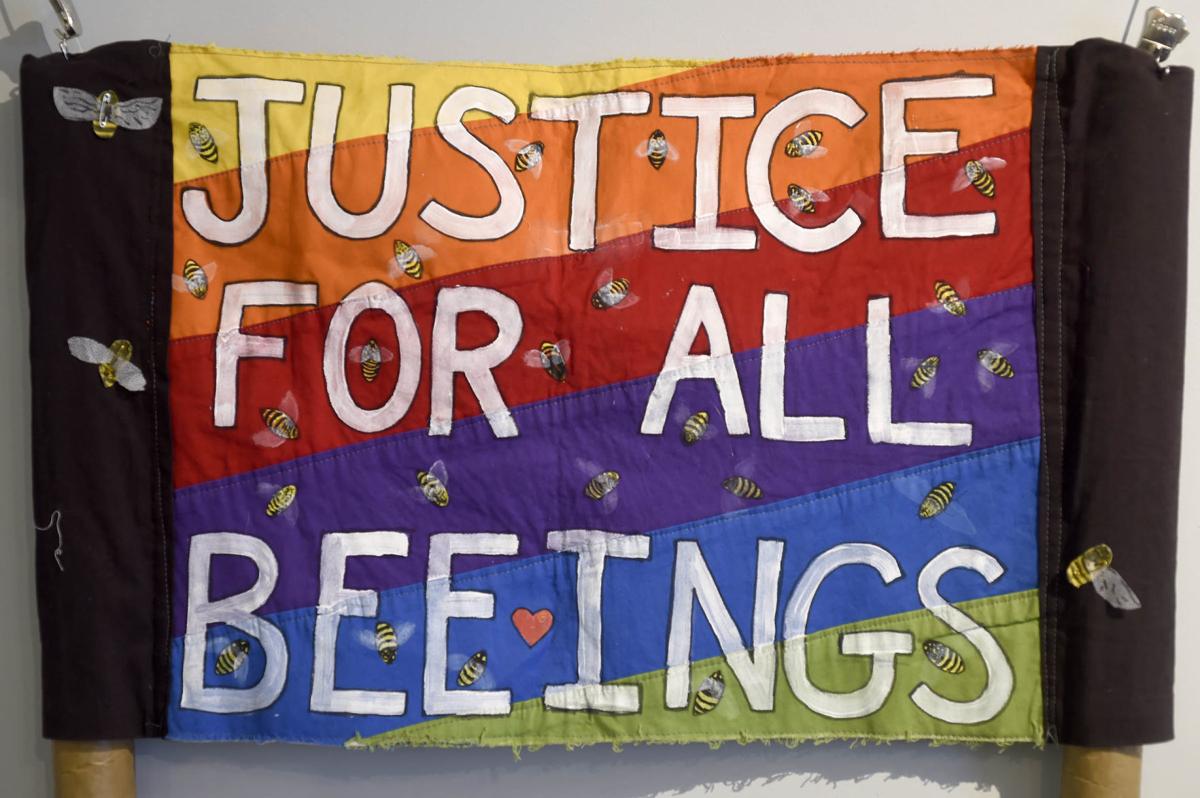 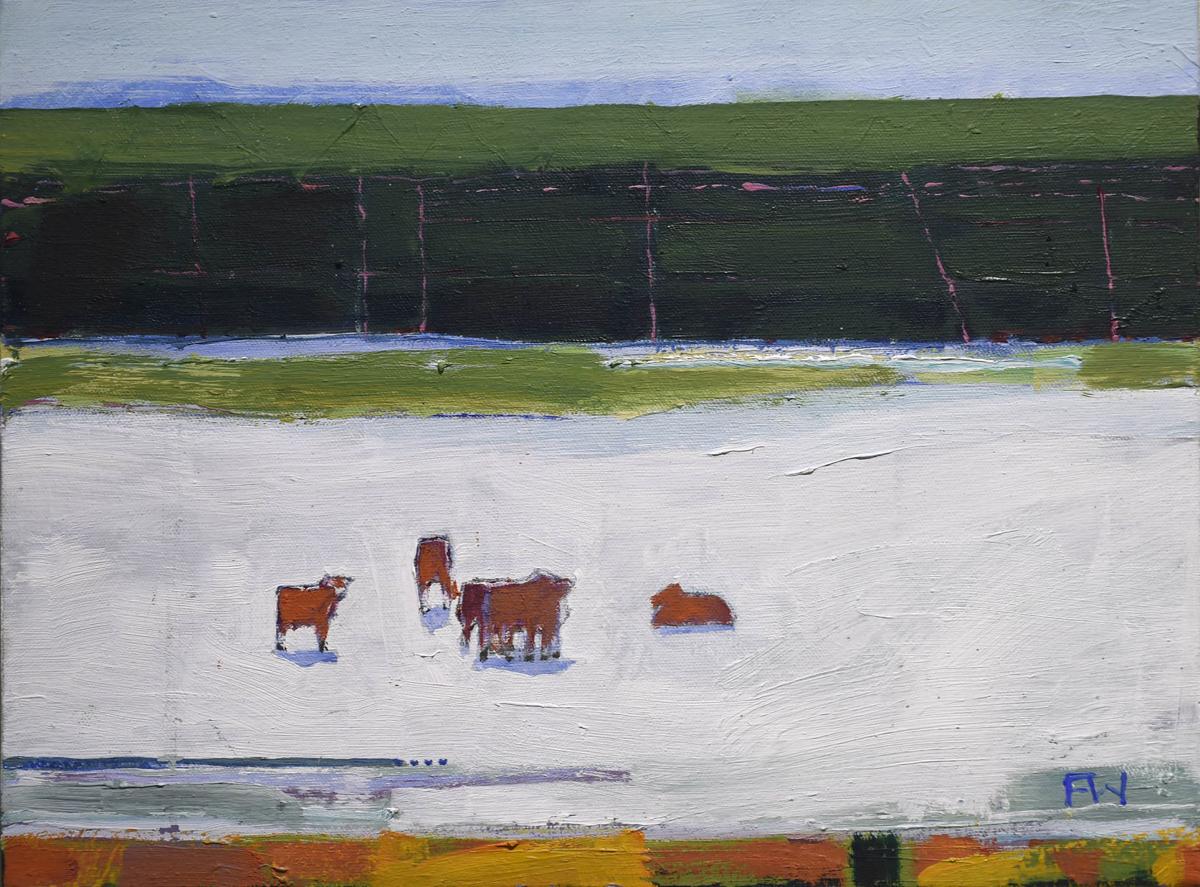 “Tell Me What’s Really Going on,” social justice/injustice in the world through the works of multiple artists and media, at Montpelier’s T.W. Wood Gallery.

A bright yellow sunflower with straight green stem glows in the center of a field of blue fabric. The words “Vermont Campaign Abolish Nuclear Weapons” in white letters encircle it. Eye-catching in its contrasts and design, the banner brings to mind activism of the 1980s, including when the Missouri Peace Planters broke into a Minuteman nuclear missile site and planted sunflowers, symbols of hope.

This bright fabric call to action is among the selections in “Tell Me What’s Really Going On” at Montpelier’s T.W. Wood Gallery. The exhibition, in the Wood’s Nuquist Gallery, considers themes of social justice and injustice and activism through works of multiple artists. Banners, posters, photographs, computer generated images, multi media installations are among the artworks.

The Art Resource Association returns to T.W. Wood with its new group show “Recollection” in the Hallway Gallery. “Recollection” features work of over two-dozen central Vermont artist members considering themes of memory, transitions and learning from the past.

T.W. Wood Gallery launches its 125th anniversary celebration later this year. With an eye to that milestone, the Wood has selected themes for this and upcoming shows that connect to the institution’s past and its role in the community.

“One of the themes that emerged was about the historical relationship between creative people in Vermont and issues around social justice,” Margaret Coleman, T.W. Wood executive director, said.

“‘Tell Me What’s Really Going On’ is a thoughtful exhibit and you see that connection to historical activism. You see a lot of different topics represented here. It is a sampling of themes that different artists in Vermont have cared about in recent decades,” said Coleman.

To consider this theme, the T.W. Wood collaborated with jen berger (who prefers lower case spelling of her name), founder of Burlington-based At the Root, to curate. An artist, educator and activist, berger consults on and organizes projects that integrate community engagement, social justice and art.

“I think we’re undereducated about the importance of art in our political lives as a society,” berger said, noting that the exhibition, “offers a moment to celebrate Vermonters, work Vermont artists have been doing, and hopefully give a sense of history and an inspiration of how we can be in this difficult moment — that we can meet, have dialogues and come away with inspiration, connections and action.”

The exhibition brings together approaches including, “Demonstration art used in protests; photographs that make you stop and think and see things differently about issues; posters that have multiple purpose including aesthetic and educational; and contemporary art in which (the) artist is able to create a dialogue with the viewer around emotional impacts of what’s going on,” berger said.

One gallery wall is filled with banners loaned from the collection of Joseph Gainza that were carried in demonstrations in the 1980s and 1990s.

Filmmaker, photographer and more, John Douglas has been a voice for change for over four decades. In his expansive “Auto-Warming” image, lines of cars sit partially submerged in a river as silhouettes of leafless trees rise among them. Offshore drilling rigs stand midstream as a tanker churns by and jets traverse the sky above the distant urban skyline.

Diane Elliot Gayer’s “Mandela/Mandala,” created as a collage and printed as a poster, was inspired by the artist’s trip to South Africa in 1993, shortly after Nelson Mandela was released from prison. Images in it include Robben Island where Mandela was held for 18 years, children and sites around Soweto, a portrait of the anti-apartheid leader and President of South Africa.

The Art Resource Association and T.W. Wood Gallery have a long tradition. The Association, founded in the 1970s to promote and support central Vermont artists organizes group shows and workshops. Annual shows at T.W. Wood go back to the museum’s earlier locations.

John Weaver’s oil painting “Sugaring” takes viewers to a welcoming sugarbush and tap and bucket days. In Maggie Neale’s “Remembering Mama,” a pink and yellow sky is reflected in a placid waterway, edged by banks still largely bare but with beginnings of spring green.

Jim Dodds’s “Clever” is that. One of his “lettersmithy” projects, the letters of its title emerge in a neon light line in an asymmetric design.

The T.W. Wood Gallery presents “Tell Me What’s Really Going on,” through April 30; and the Art Resource Association “Recollection ” group exhibition, , through March 26. Also on exhibit works from the Federal Art Collection and the T.W. Wood permanent collection, ongoing, at the Center for Arts and Learning, 46 Barre St. in Montpelier. Hours are: noon to 4 p.m. Tuesday- Saturday; or by appointment; admission is free; call 802-262-6035, or go online to www.twwoodgallery.org. An artists’ reception will be held 1 to 3 p.m. Saturday, March 14; Art Walk reception, 4 to 8 p.m. Friday, April 3.