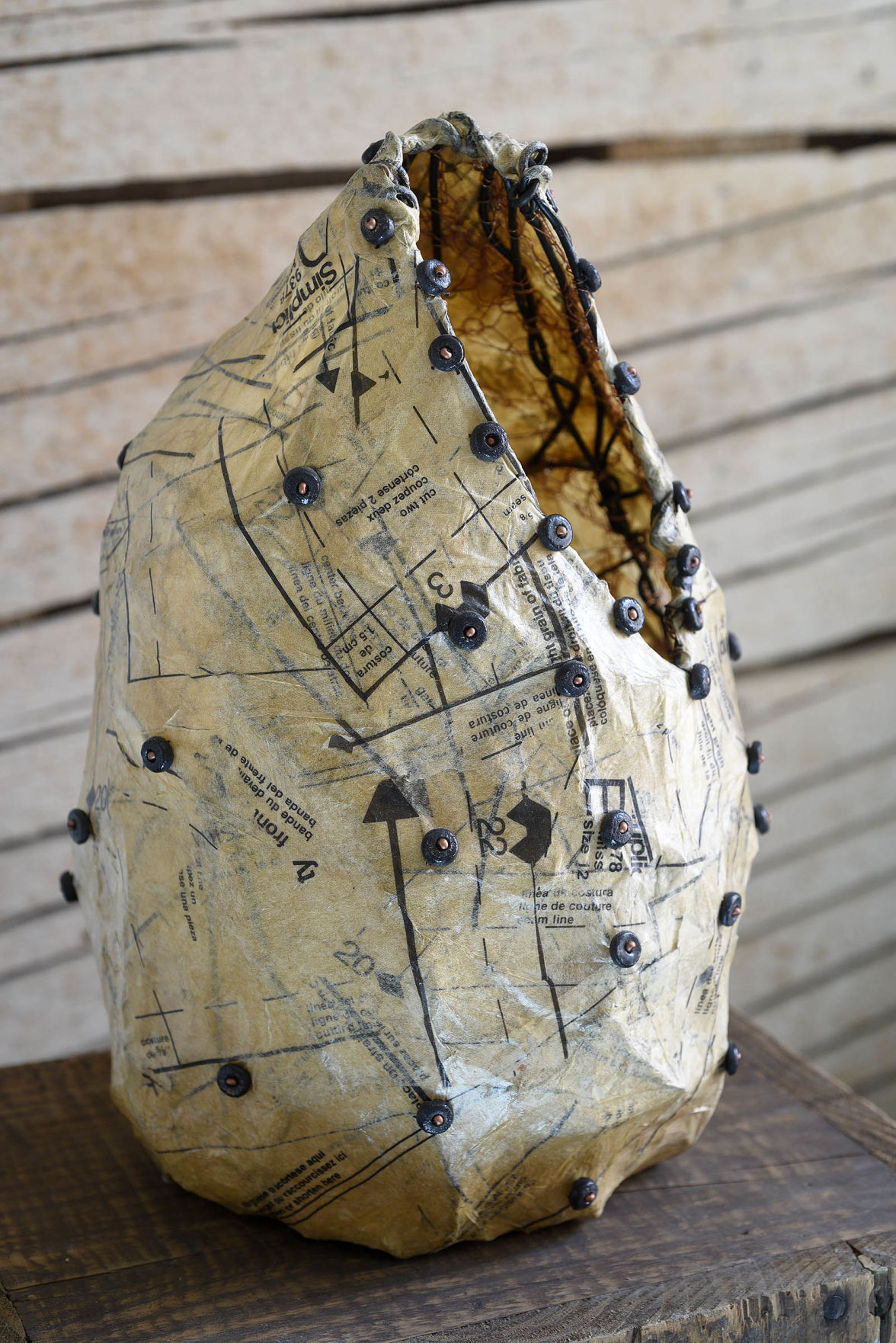 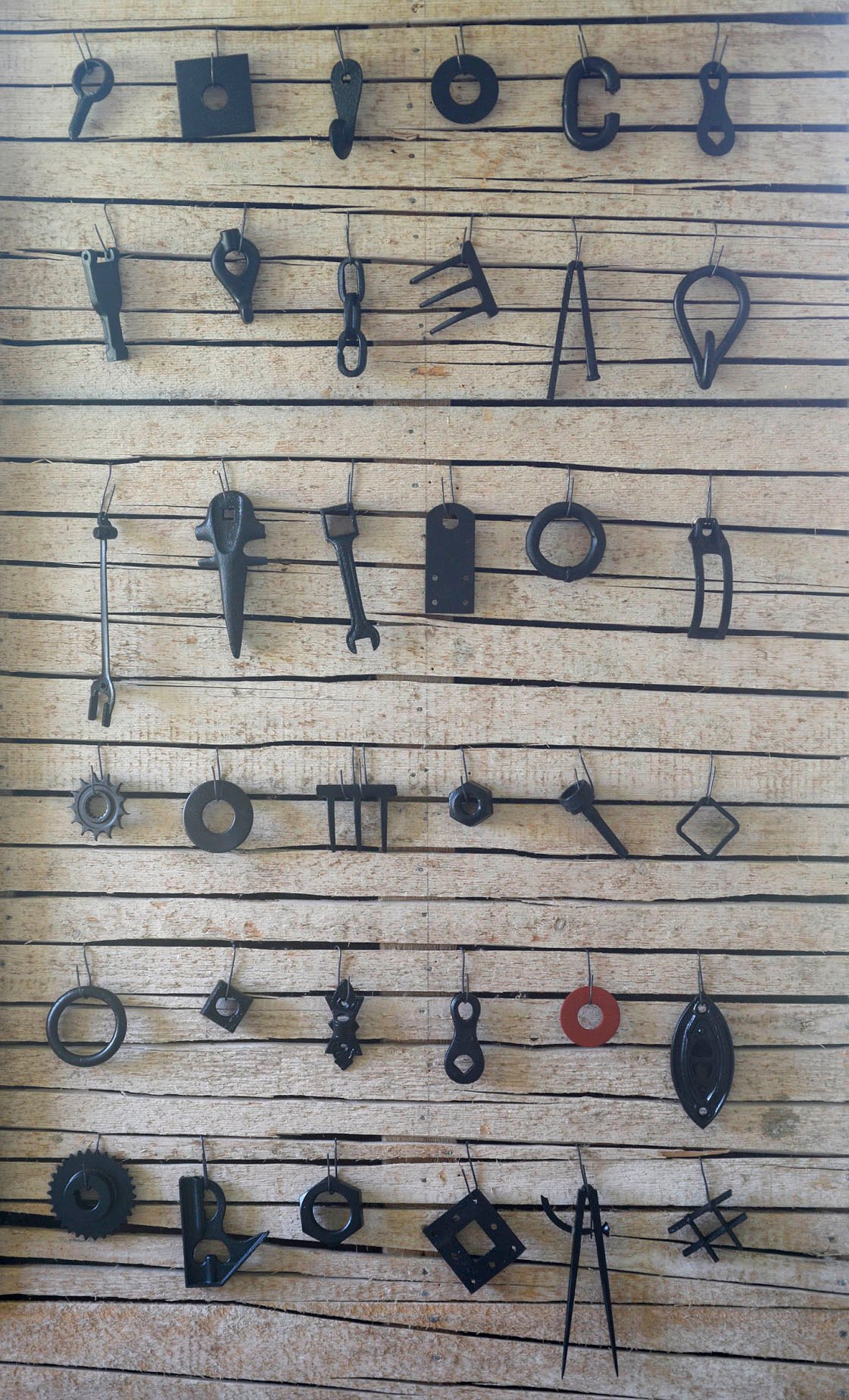 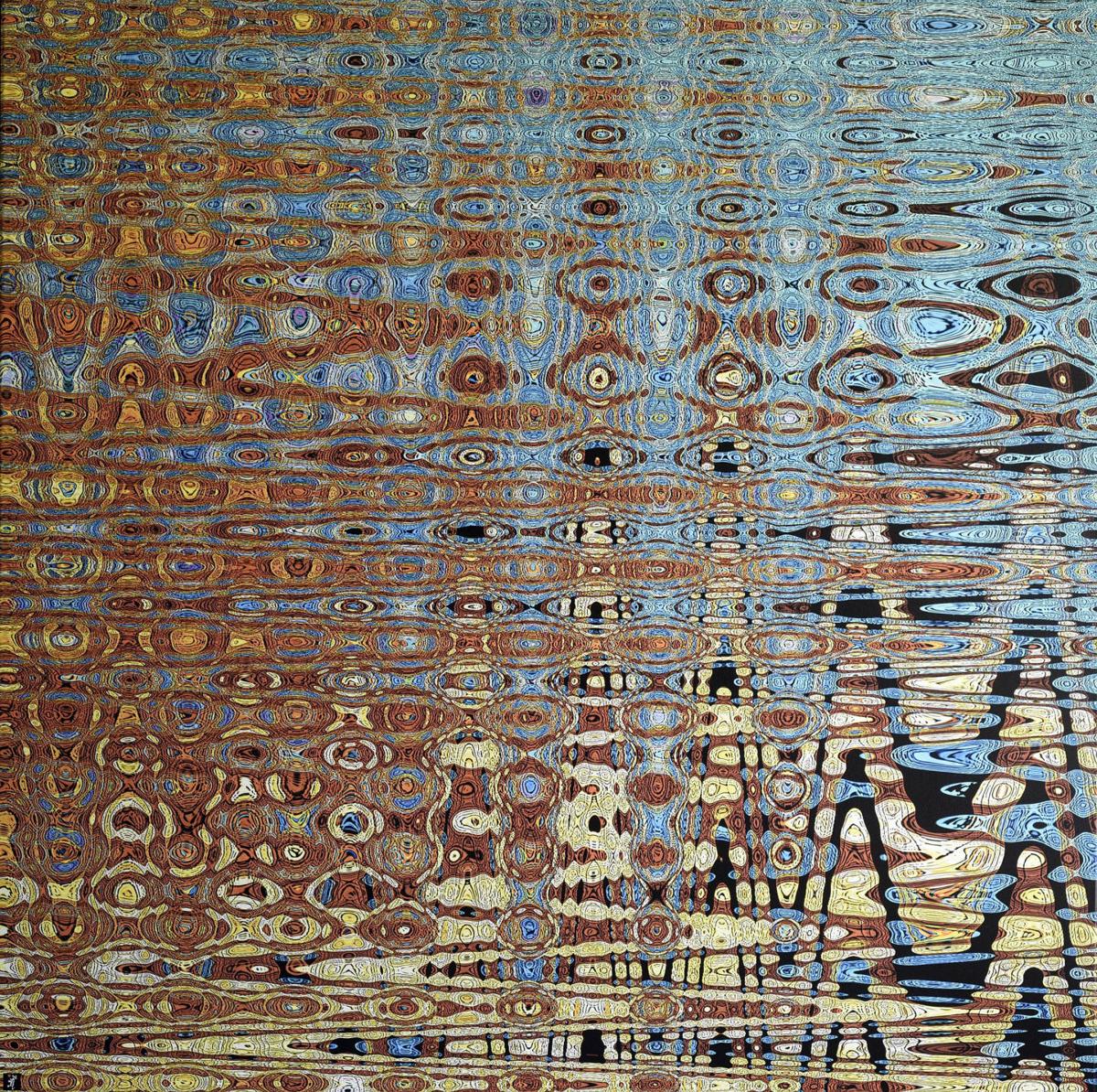 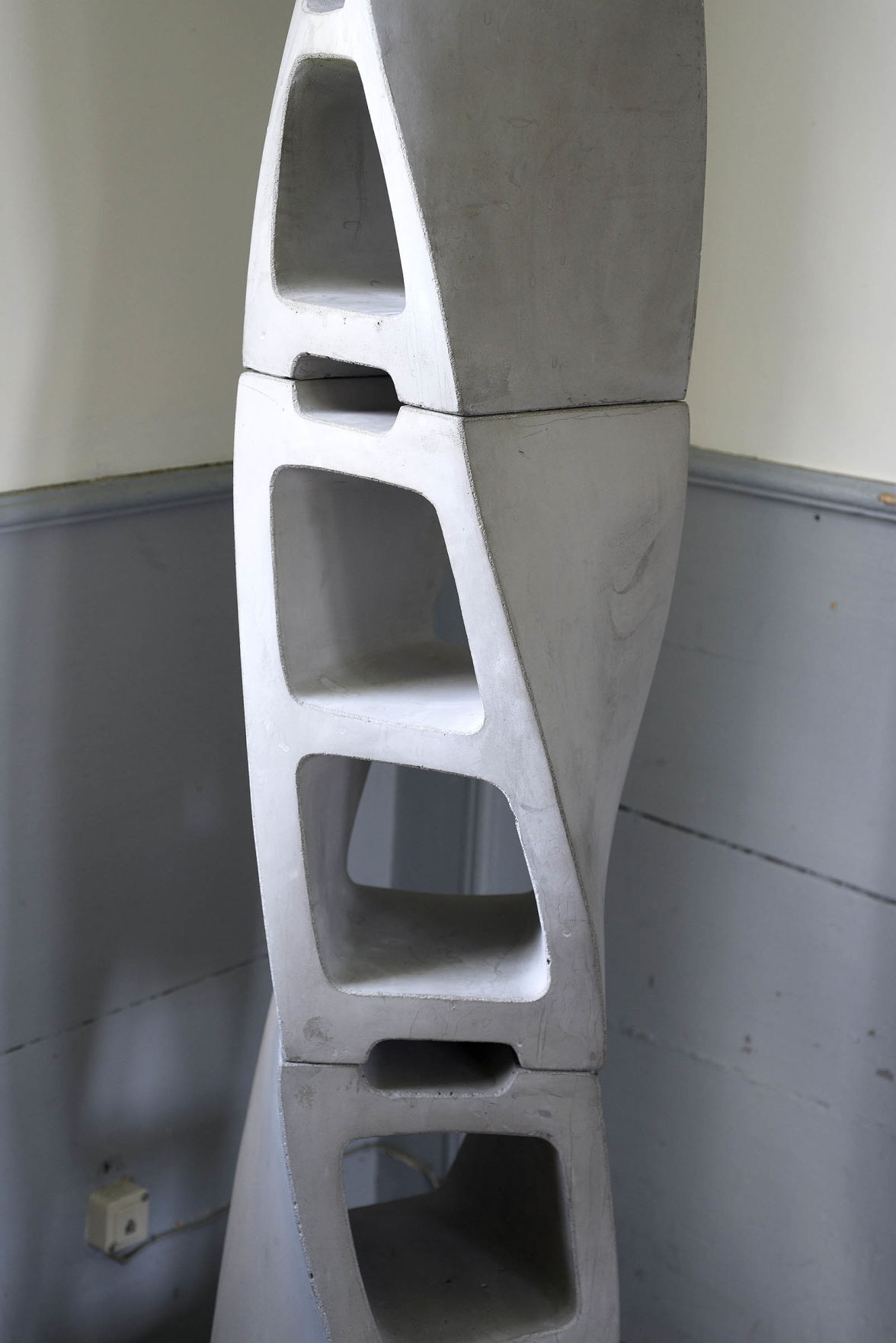 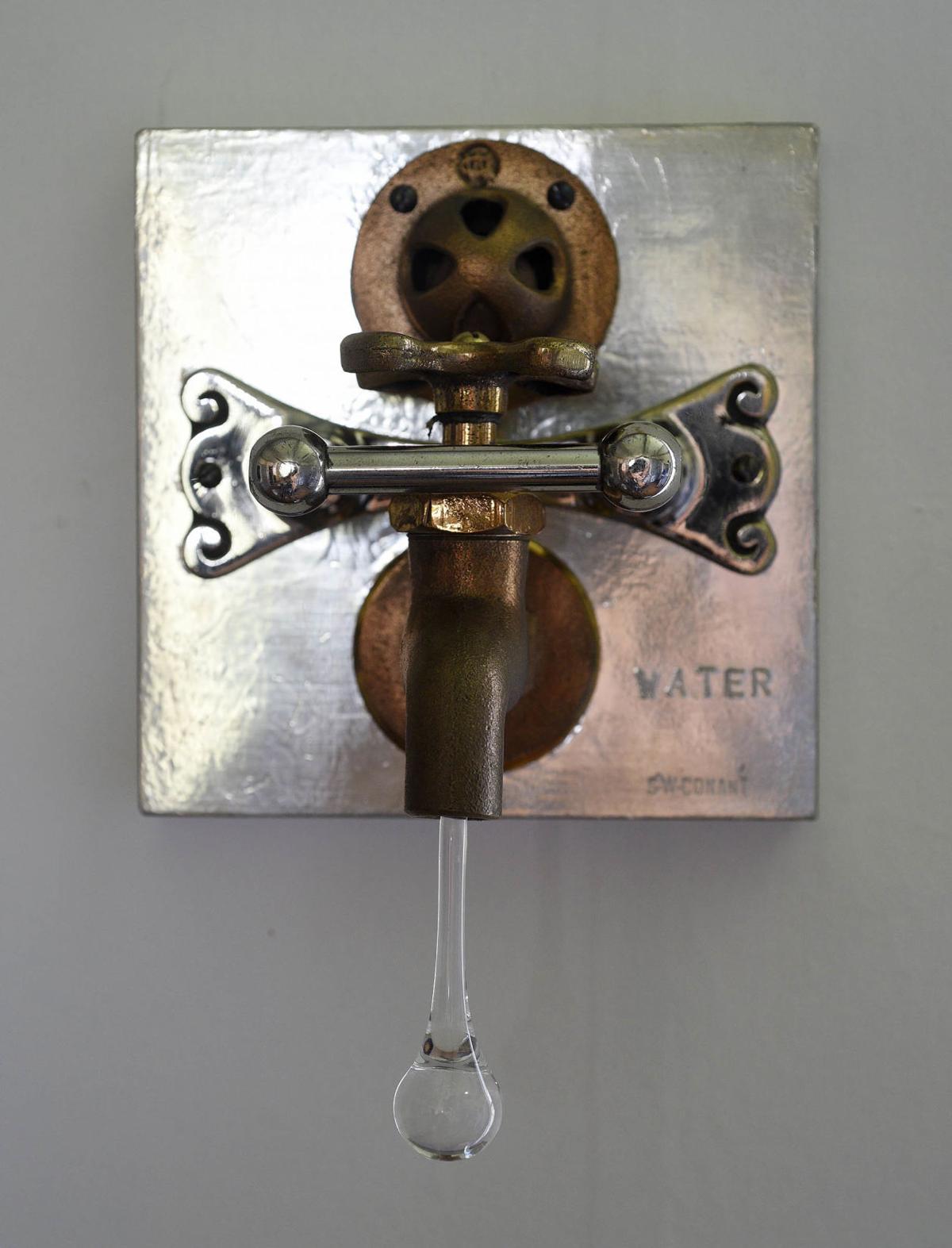 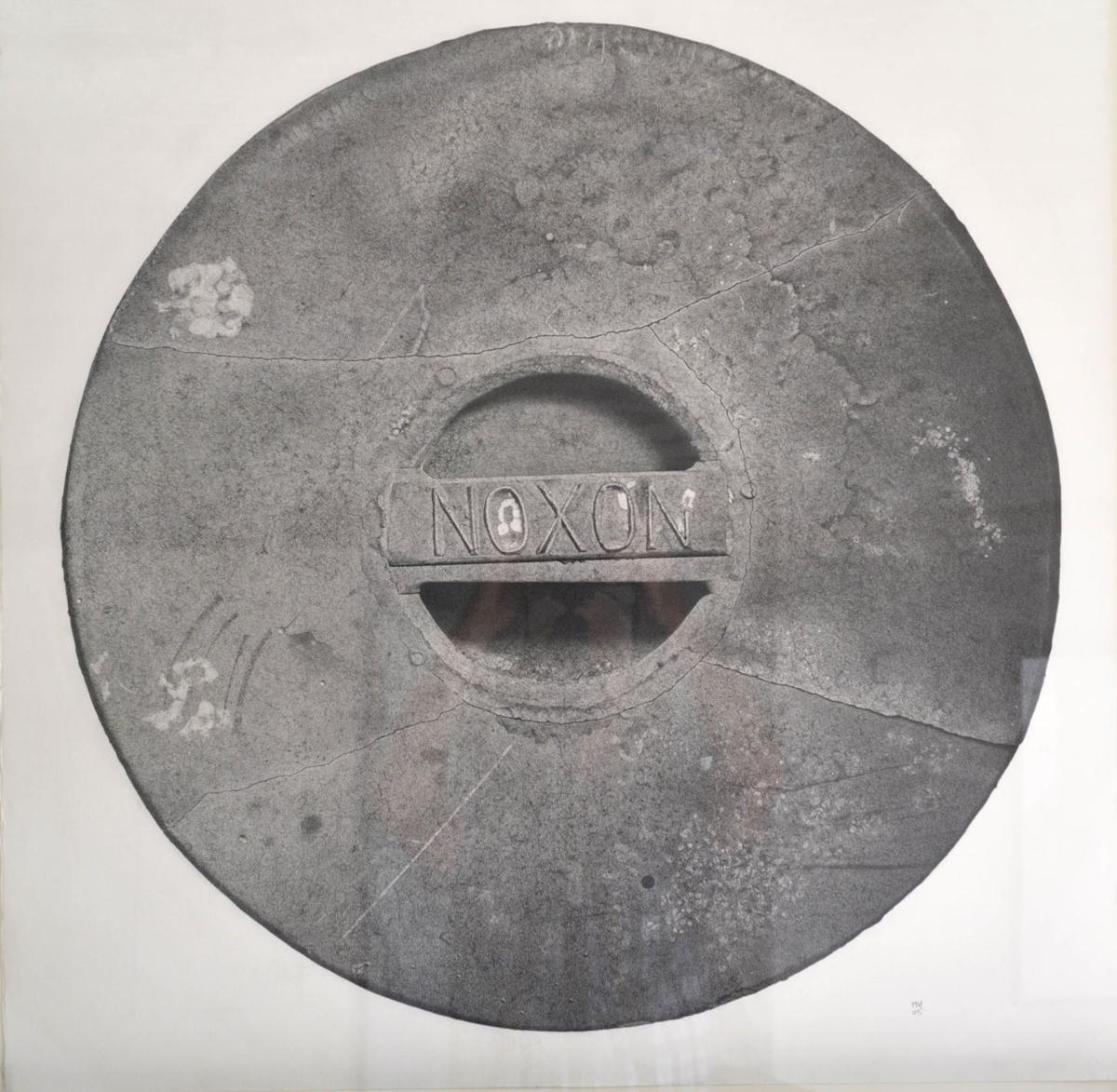 The feeling of sharp edges, cold steel and industry emanates from Gloria King Merritt’s triptych digital painting “Changing Gears,” a piece inspired by a vintage model used by a gear salesman. The model is also on display.

Nearby hangs a giant — really giant — paintbrush by found object sculptor Cindy Blakeslee. Its long bristles on close examination are revealed as strands of maps, shredded in a pasta maker.

A few feet away, a pair of assemblages, also inspired by the paint trade, by John Parker whimsically bring together 19th century paint receipts and artifacts.

From paint to color, Chris Jeffrey goes in a 21st century direction using Vermont made color shifting filters (they are used in devices including the Mars Rover) in pieces that change with light sources and the viewer’s position. Color, he notes in his artist’s statement, doesn’t exist without light.

“20/20 Hindsight: Seeing the Past Anew with Contemporary Art” opens this weekend at Kents Corner State Historic Site in Calais. In this 13th almost-annual exhibition of Art at the Kent — last year was outdoors only because of COVID-19 — 20 artists put a contemporary slant on methods and materials of rural culture of 19th century Vermont.

The buildings’ history shows in their bones and surfaces — some rooms stripped down to underlying split lathe, some have metal mesh intended for re-plastering. Others show the touch of Louise Andrews Kent, a writer and Martha Stewart of the 1920s-1950s, whose vision for the preservation of the property as a museum guided some of its restoration. The character and condition of the various rooms — nearly 20 exhibition spaces in all — offer varied connections to the past, and open unexpectedly rich connections to the contemporary art presented there.

Beyond the main buildings, the landscape at Kents Corner remains much as it was in the 19th century. Exhibitions expand into the grounds, including with new installations this year including Carol MacDonald’s knitted pieces of polyester rope, “Knit Vision I” in the apple tree and “Knit Vision II” in the cedar grove. In Christopher Curtis’s sculpture “The End of Truth,” a window through a boulder invites the viewer to consider viewpoints and perceptions of reality. Flywheel industrial Arts’ giant clothespins consider a past Montpelier industry. Steve Conant’s orange hay-rake bike rack gives visitors a new place to rest their wheels.

“We’re playing with the deconstructed bones of the old building. The arrangement of the objects and art is about the conversations that the art is having with the past,” explained David Schütz, one of the show’s three curators, with Nel Emlen and Allyson Evans.

“This show is more about the past than a lot of our shows, and very specifically about Kents Corner and what was going on here in the 19th and early 20th centuries,” Schutz said.

Kents Corner, like many hamlets around Vermont, was bustling with small businesses a century ago Among the Kent businesses on this site were starch making, boot, shoe, and harness and saddle manufacture.

For “20/20 Hindsight” some artists reflected on these legacies.

Carol MacDonald’s engraving “Child’s Boot,” age-creased leather, toe worn through, missing its lace, evokes a sense of a 19th century child, who may have worn it. Next to Macdonald’s engraving, sitting on a wooden shoebox attached to the exposed lathe of an upstairs bedroom wall is the little boot itself — a boot that was very likely made in the Kents’ shoe manufacture and was found in a nearby house.

MacDonald further explores the shoe theme with a series combining footprints of dirt and ink and hand drawn portraits of shoes.

Kate Gridley considers 19th century tools and utensils in her paintings. Antique whisks, an egg separator, tea infuser, egg slicer, cast iron trivet and other pieces stand as if in a family portrait in a kitchen-inspired still life. The utensils’ purpose-driven metal shapes, wooden handles, colors, and sense of working hands converse with the bare lathe wall with wire mesh patching in the former Kent dining room where it hangs.

Every year, Emlen and Evans spend countless hours in the weeks before Art at the Kent shows open, finding exact positions and relationships between artworks and with the building. Their astute curating offers viewers abundant unexpected moments — thought-provoking, beautiful, contemplative, sometimes witty.

In the former taproom of the Kent Inn hang a pair of Tom Leytham’s watercolors of copper tanks and pipes of a distiller. At the entrance to Louise Andrews Kent’s quirky wallpaper rooms hangs one of John Parker’s beautifully composed assemblages — this one paying tribute to the wallpaper trade.

The tiny Kent-made shoe shares a room with handmade hats of musician and artist Toussaint St. Negritude — shoe making and haberdashery sharing craft at opposite ends of the body.

Fossil fuel, coming to prominence in the late 1800s, is the focus of one gallery, with Steve Conant’s “The End of Gulf Refining Company” suggesting a possible fresh direction. Harness-making and saddlery are the focus of another.

For something completely different, a closet previously unopened for show comes brilliantly to light with a pair of Chris Jeffrey’s infinity boxes.

As always, Art at the Kent is a little like Brigadoon — it only briefly appears and then is gone for another long stretch. Like Brigadoon, it is breathtaking while it’s here.

Art at the Kent presents “20/20 Hindsight: Seeing the Past Anew with Contemporary Art” Sept. 10–Oct. 10 at the Kents Corner State Historic Site, 7 Old West Church Road in Calais. Hours are: 10 a.m. to 5 p.m. Friday-Sunday, with an opening reception, 3 to 5 p.m. today (Sept. 11). Advance tickets are required for opening weekend and recommended throughout the run of the show. Admission is free: call 802-223-6613, or go online to www.kentscorner.org