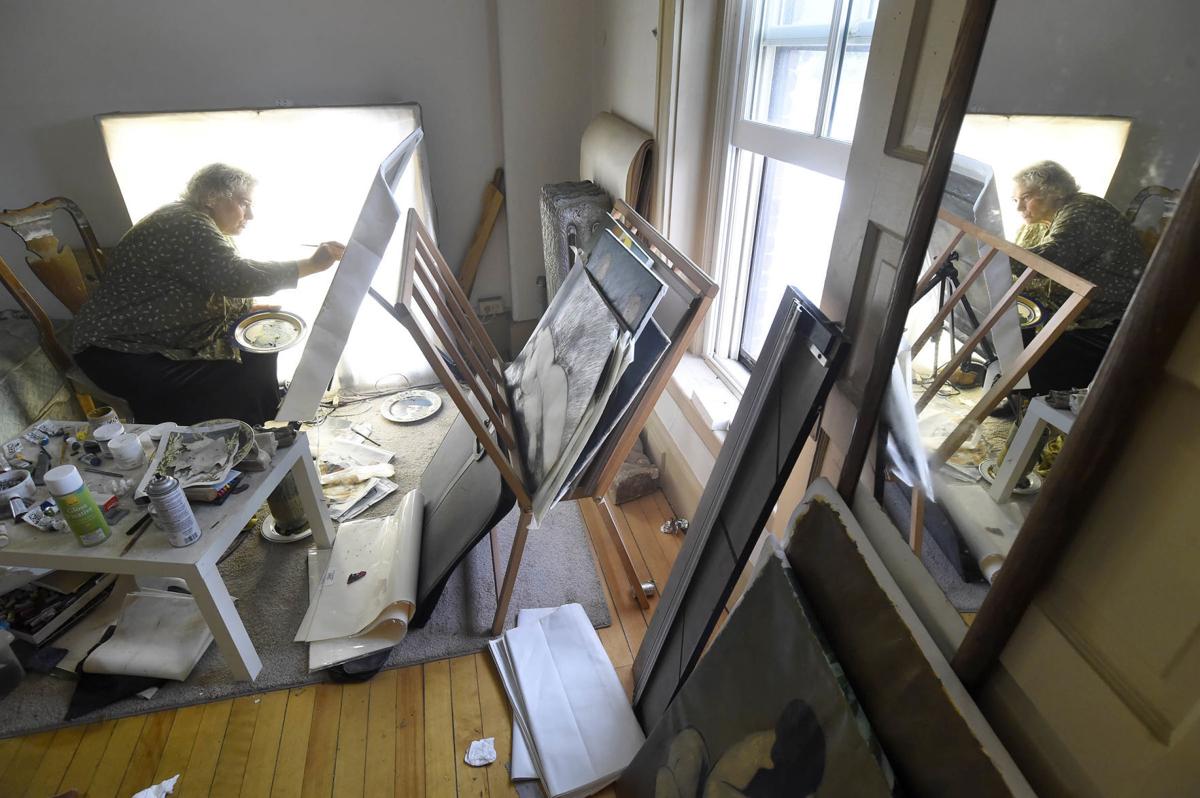 Artist Alexis Kyriak works on a canvas in her Montpelier studio recently. Her art is currently featured at the Chaffee Art Center in Rutland. 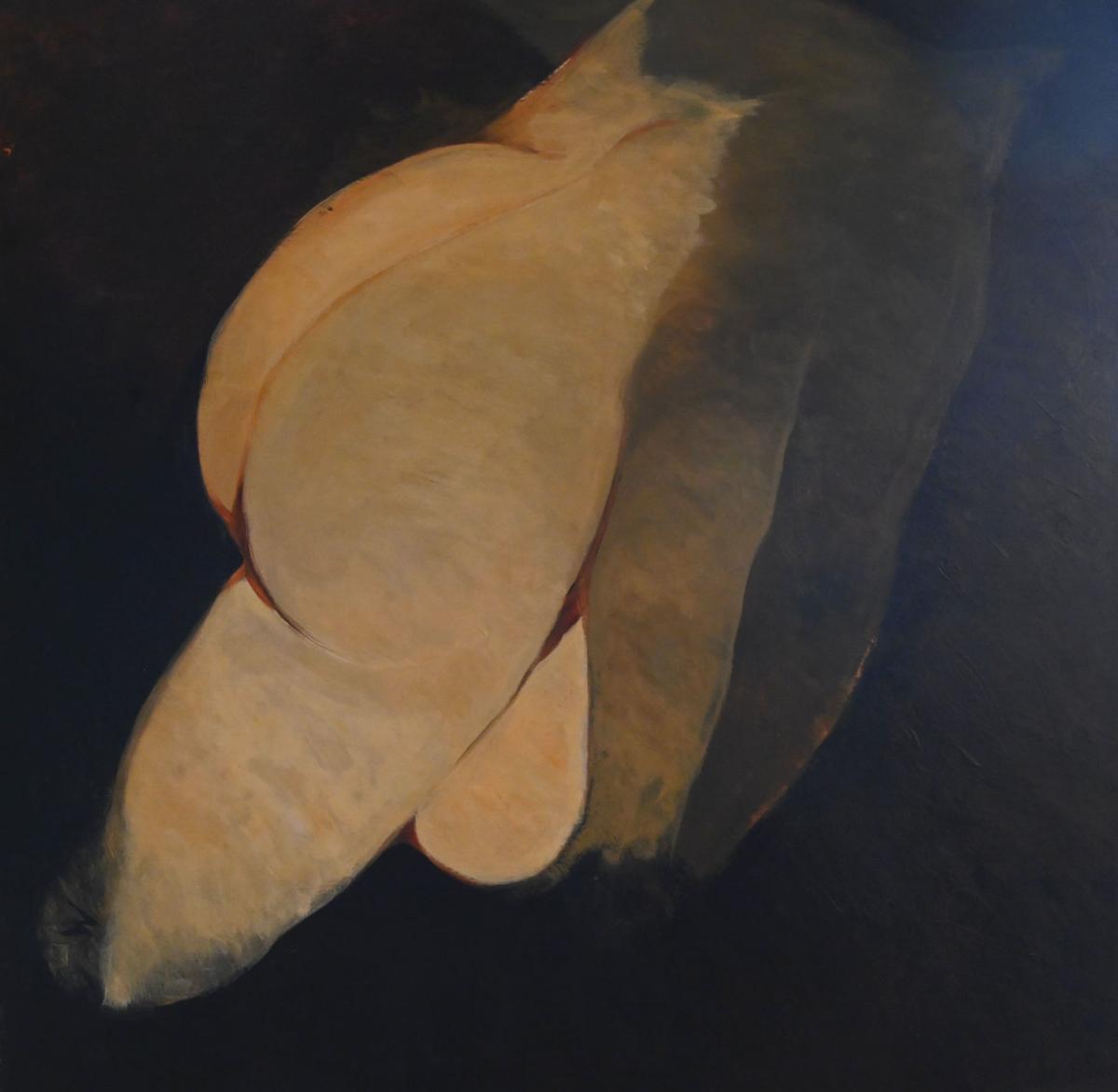 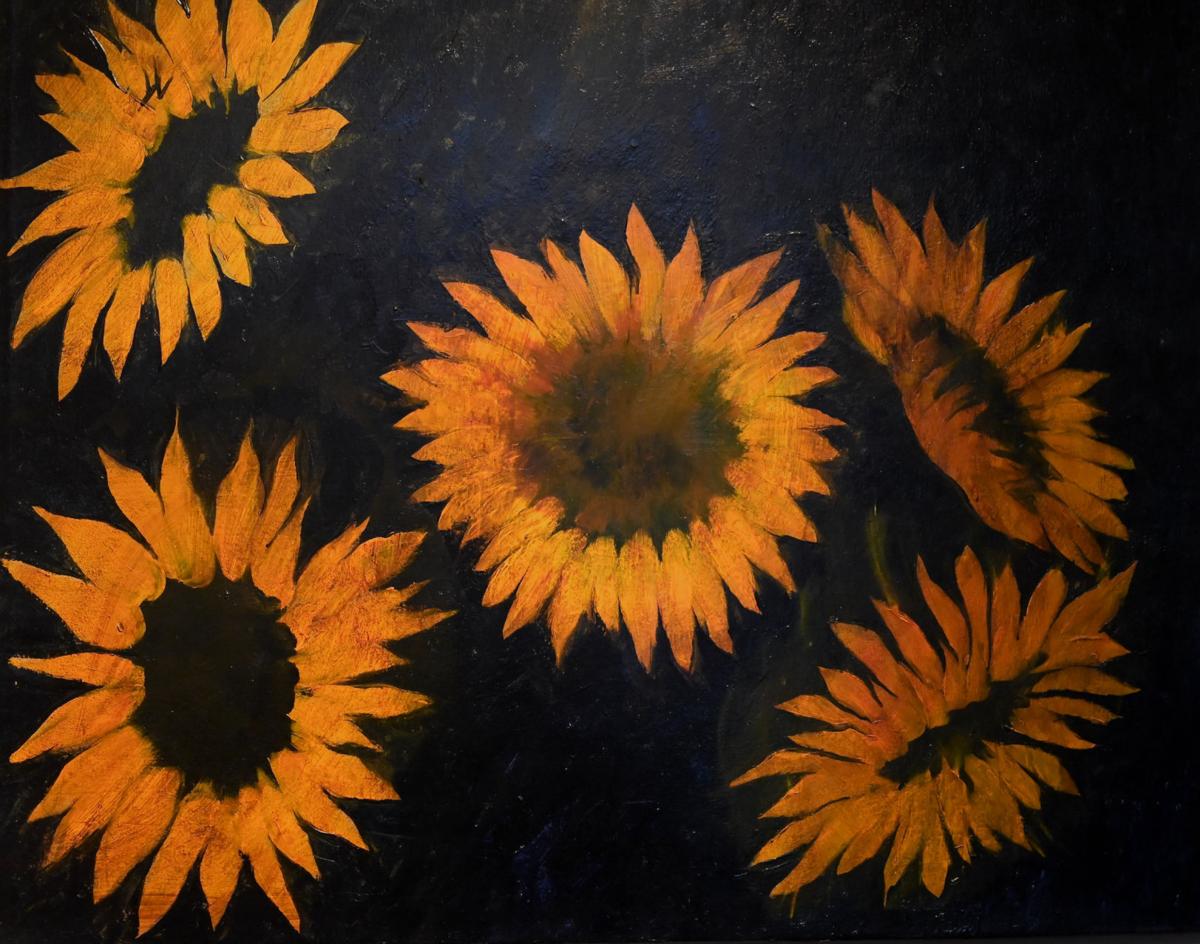 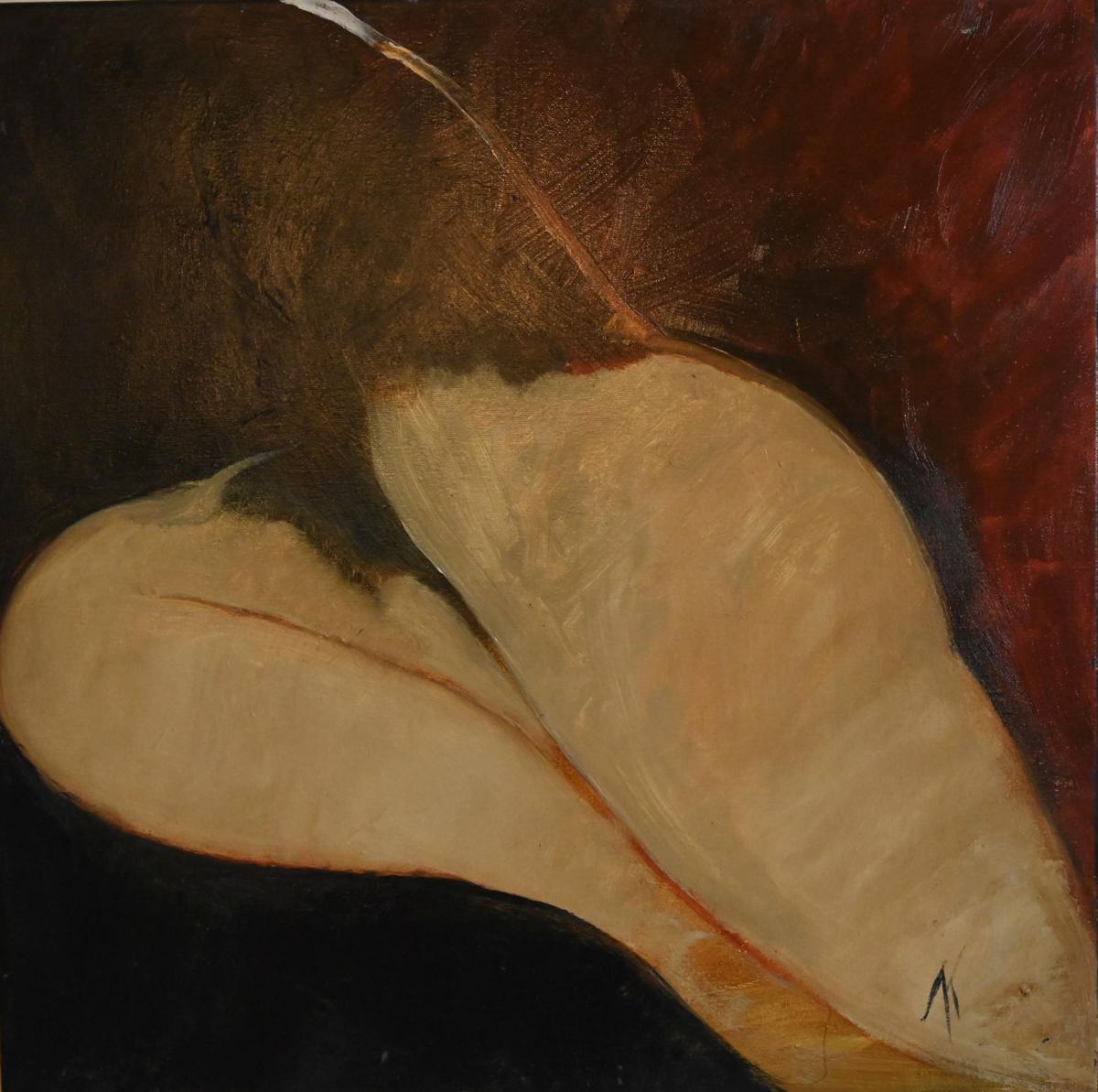 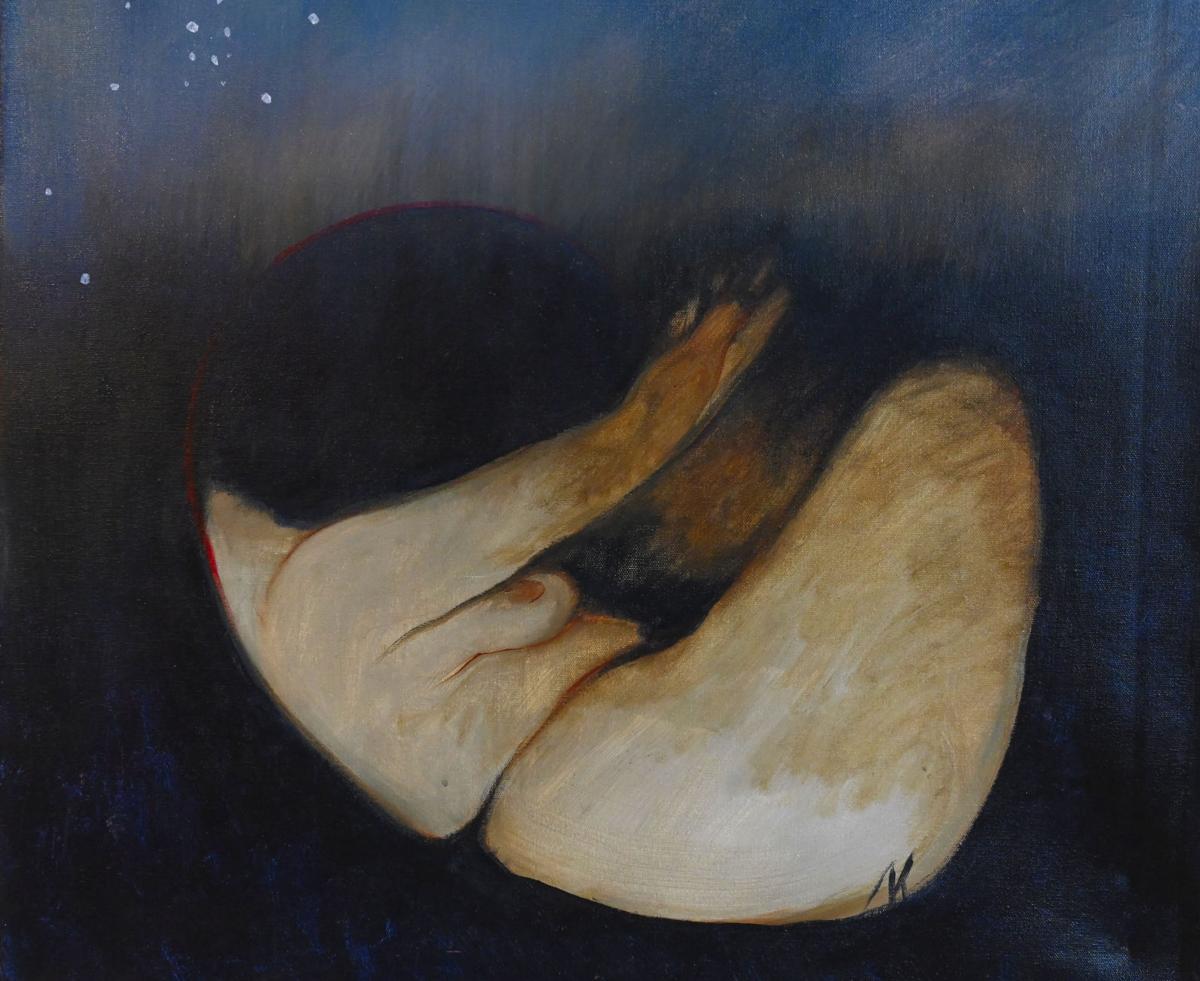 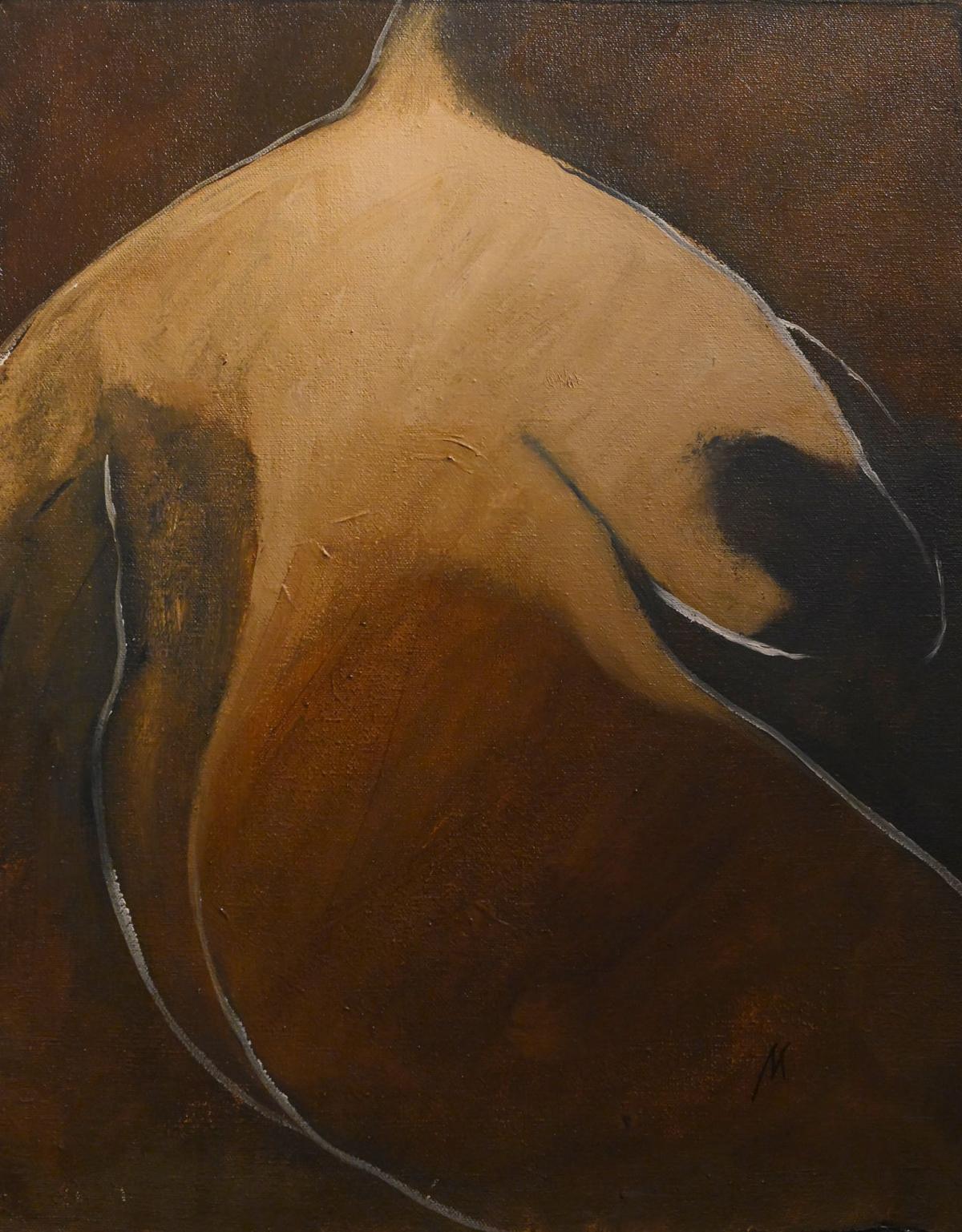 Artist Alexis Kyriak works on a canvas in her Montpelier studio recently. Her art is currently featured at the Chaffee Art Center in Rutland.

It is estimated that almost half of all adults will experience a mental illness during their lifetime. And one of the first things that comes up when you search the connection between mental illness and creativity is the positive effect art can have on mental health.

Diagnosed with schizophrenia at age 18, Alexis Kyriak said she knew at a young age that she had a gift for art. But it was not until she was in her 40s and came to Vermont that it was realized.

“I had a very obvious talent from early childhood,” Kyriak wrote in a personal essay. “It was evident at four years of age. At 7, the illness set in. In middle school, I became unreachable.”

“My mother and my teachers knew,” Kyriak said by phone recently. “I was very troubled.”

But her mother didn’t understand Alexis’ need to express herself through art. Later, Kyriak would surmise, “When our gifts are thwarted, illness results … unhappiness, unrest,” from a collection of loose-ends style reflections she wrote.

Kyriak saw a child psychologist from the age of 9, and recalled one day at 12 or 13, “I flipped. I just changed. I changed into anger, total rage.”

“If my art had been cultivated as a child, I think I would have avoided the illness,” Kyriak said. “That’s the strength of our gifts.”

Born and raised in New York City, the story of how Kyriak came to Vermont is an incredible one, the stuff of books and movies. It began when she was 18, and entered the first of many hospitals during the ensuing decades.

“I’ve seen stuff that you don’t want to know,” she said, “in my past, the wards and the difficulty of the illness.”

“In that time, I was given chance after chance to paint and sculpt, and schooling, but I would not go near the beautiful professional materials I was given, and could not sustain study,” Kyriak wrote. “I still have 300 credits and no degree because of my affliction. One of the hallmarks of the illness is the avoidance of the very thing one desires and loves. … it is a sort of anorexia. I could not approach it for years.”

But the hospitals recognized her predisposition toward art, and to some degree she was able to take advantage of the subsidized schooling they offered. In New York, she studied at the Fashion Institute of Technology, the National Academy of Fine Art & Design, and Brooklyn Museum School, among others, which she credits for her understanding of anatomy, perspective, design, drawing and the techniques of oil painting.

Still, it wasn’t until Kyriak moved to Vermont at age 41 that she was really able to focus on the thing she loved.

“Thirty years ago I came to Vermont and my art began,” she told me. “I’m 70 now. I painted all along, but not seriously. As soon as I hit Vermont soil, the art took off.”

The catalyst came during a stay at Creedmoor Psychiatric Center in Queens, New York, a place once known for its patient abuse, including rapes, murders and beatings, which led to an investigation. A 1984 article in The New York Times with the headline, “Fear and Brutality in a Creedmoor Ward” looked into the death of a patient, and two doctors there who “routinely” signed blank prescription and restraint forms.

“I escaped,” Kyriak said. “They gave me a pass, and I never went back. I don’t want to go into what I’ve suffered, but it was the occult.”

“It was Christmas,” Kyriak recalled. “I was waiting for an appointment, and across from me was a Christmas tree. And that tree was lit up — for me. There was such a feeling of utter safety and peace (that) I had to know I was at that hospital because I was — never mind. It was hell there.”

With $5 in her purse, she took a train into Manhattan. She was on the streets for three days. She hid in a church one night, praying with all her heart to St. Nicholas. With nowhere to go, she realized she had to return to Creedmoor. She boarded the subway back to Queens, but when the doors opened, an old family friend was the first person she saw. “Alexis! How are you?” she asked.

“I told her how I was, and she said you come with me, my mother has lots of connections,” Kyriak said. “I was on that train heading back saying ‘I’m lost, I’m finished,’ and the doors opened up at Queensboro Plaza, and there (she) was, from St. Nicholas.”

The friend’s mother and their pastor knew a woman in Vermont who worked with the occult-abused. They sent Kyriak to White River Junction on an 8:30 a.m. train from Penn Station, and a brand-new chapter in her life opened.

It became the turning point for her, “from a life of frustration to the past 30 years of work, that to this day gives me stability and acceptance in my community.”

Among the support she found in the Montpelier area where she lives, she credits her church and Washington County Mental Health. She says at this point, Vermont feels more like home to her than New York did.

“It’s the best possible scenario for me.” The illness is managed with medicine, but to say that art is a big part of her therapy is an understatement. “It’s the only thing I can do,” she says.

Today, when you walk into her apartment, 100 paintings stacked against a wall and a table full of graphite drawings are just hints at the last 30 years of work in the three-room apartment. “Creative chaos,” she calls it.

Kyriak has apprenticed with many Vermont artists, and her work has been shown at galleries all over the state, and won awards. Her media are acrylic and canvas, graphite and paper, fiber and clay; her subject matter: “the feminine collective energy.”

“Mostly it’s the female nude,” Kyriak said, “and very often using the nude as a base I go into abstraction. Then I add elements of Vermont.”

She works anywhere from 3 to 5 hours a day, and says, “My studio is set up for immediate work, whenever I’m called to the easel.”

“It’s the best of times, it’s the worst of times,” she said about her day-to-day experience of living with schizophrenia. “It’s a very deep struggle.”

But, she added, “As far as schizophrenia and the arts are concerned, a person comes to the planet to grow, and for me the growth was made possible by the schizophrenia, through the art. Because the art was the only thing I could do.”

Kyriak shared her story with Erica Heilman for Vermont Public Radio two years ago, describing the illness as “an alienation. It’s a feeling that you are living, but you can’t have a life. You look at other people and say they have it and I don’t. You watch other people live and think, I’ll never do that.”

“If the community can accept us,” Kyriak replies, “we can accept ourselves.”

Editor’s note: Janelle Faignant is a member of the Chaffee Art Center board of directors.

The Chaffee Art Center presents work of Alexis Kyriak, through Oct. 30, at 16 S. Main St., Rutland. Hours (distancing and masks required) are: noon to 4 p.m. Thursday and Friday, and by appointment; call 802-775-0356, or go online to www.chaffeeartcenter.org