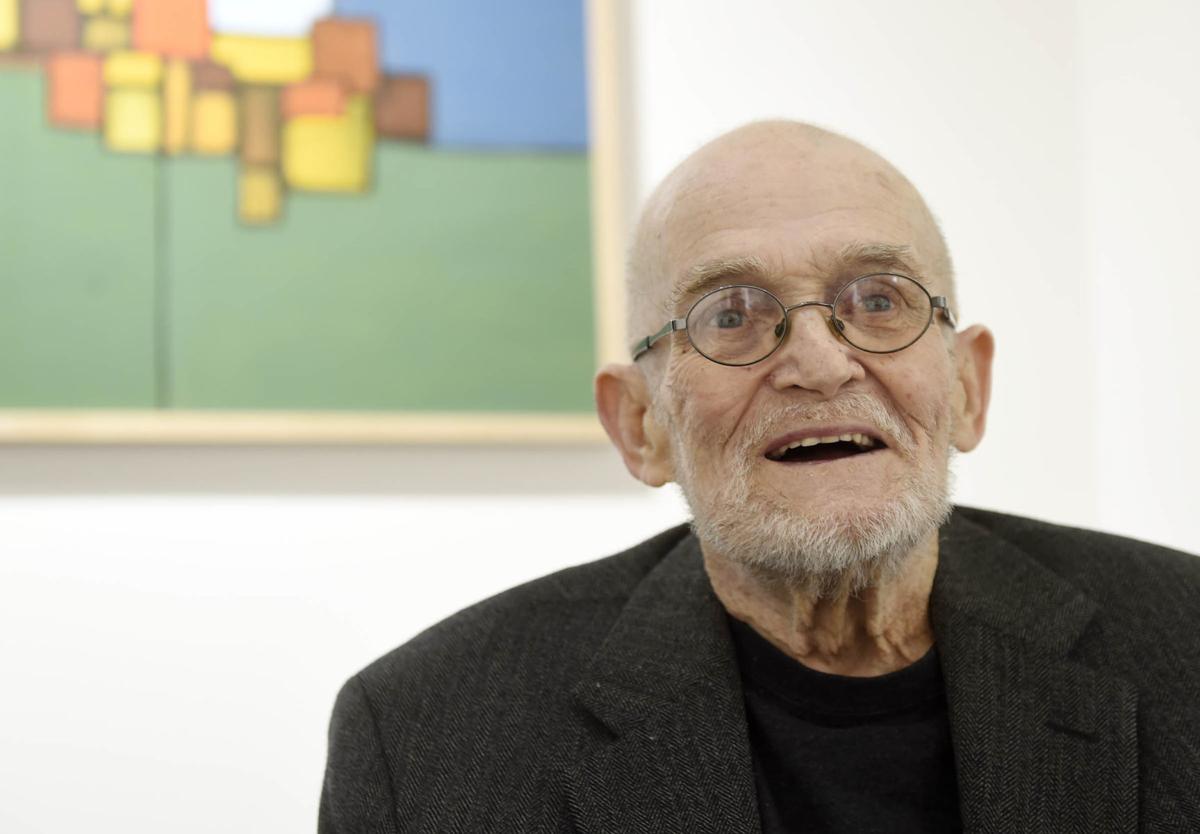 Acclaimed Montpelier artist Ray Brown at the opening for his show “Tumbling Toward the End,” at the The Front gallery in Montpelier. 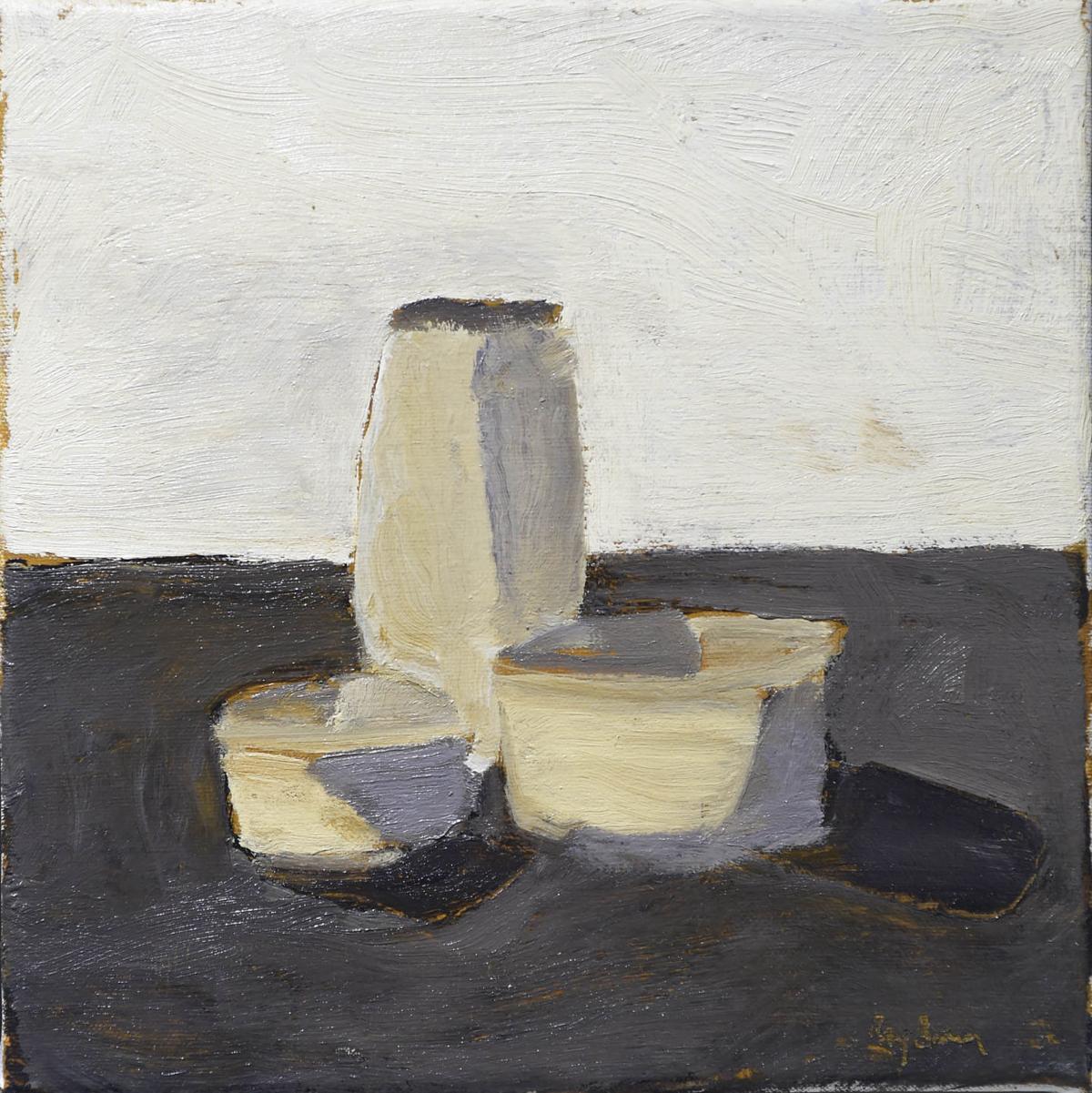 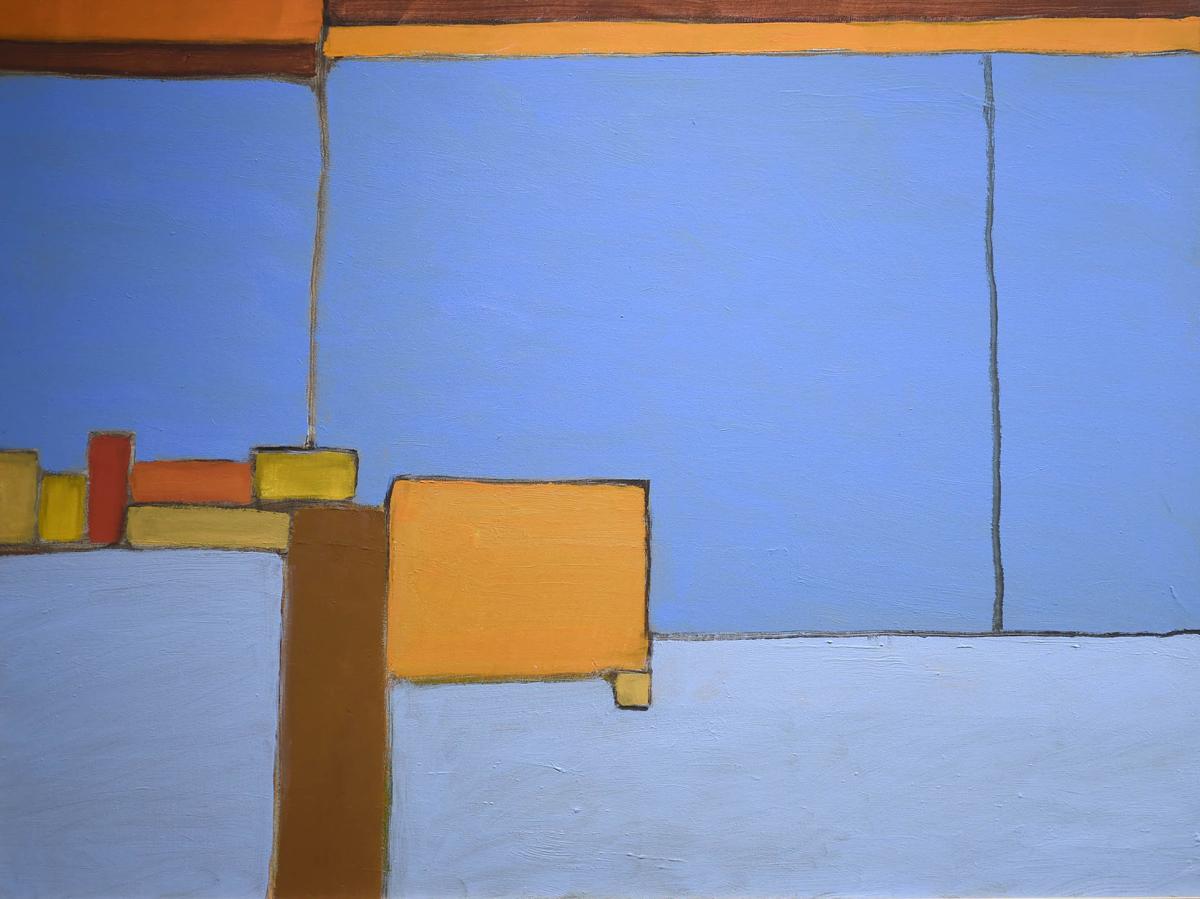 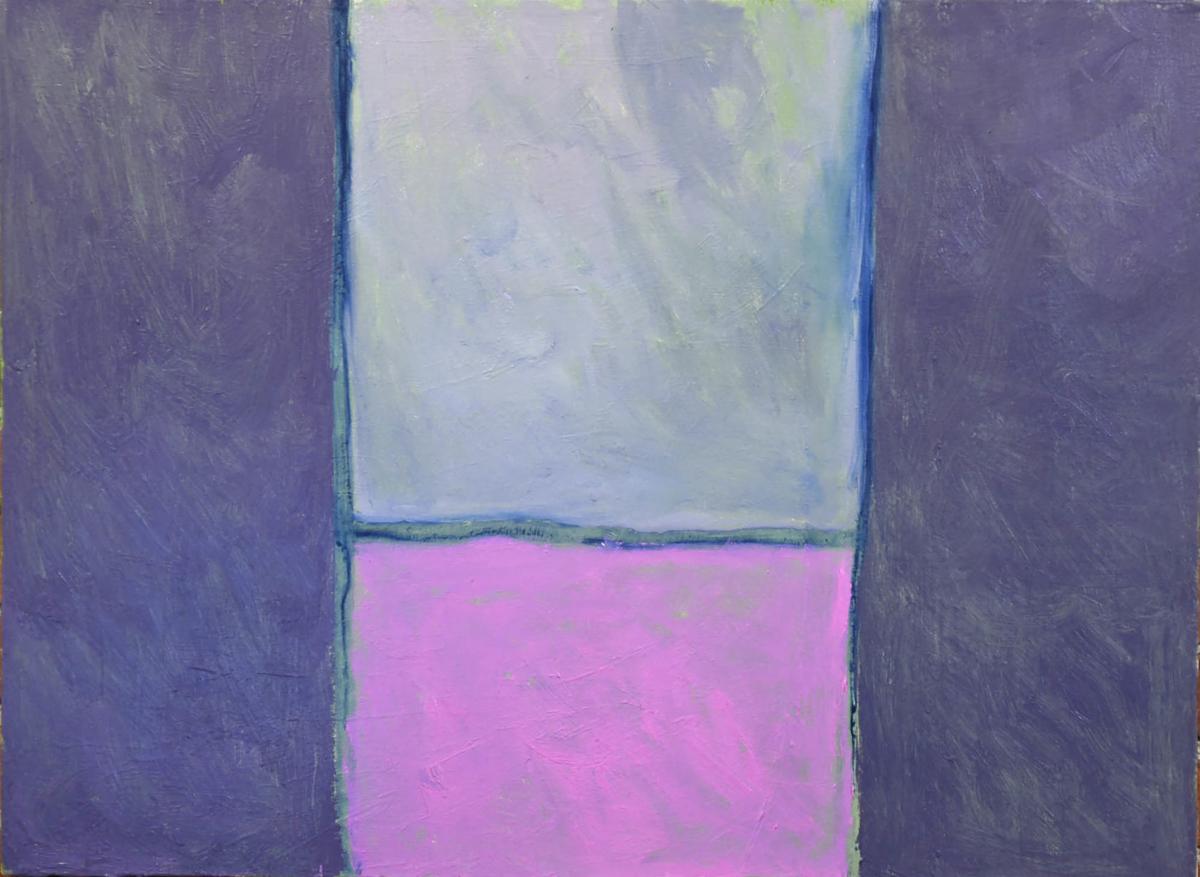 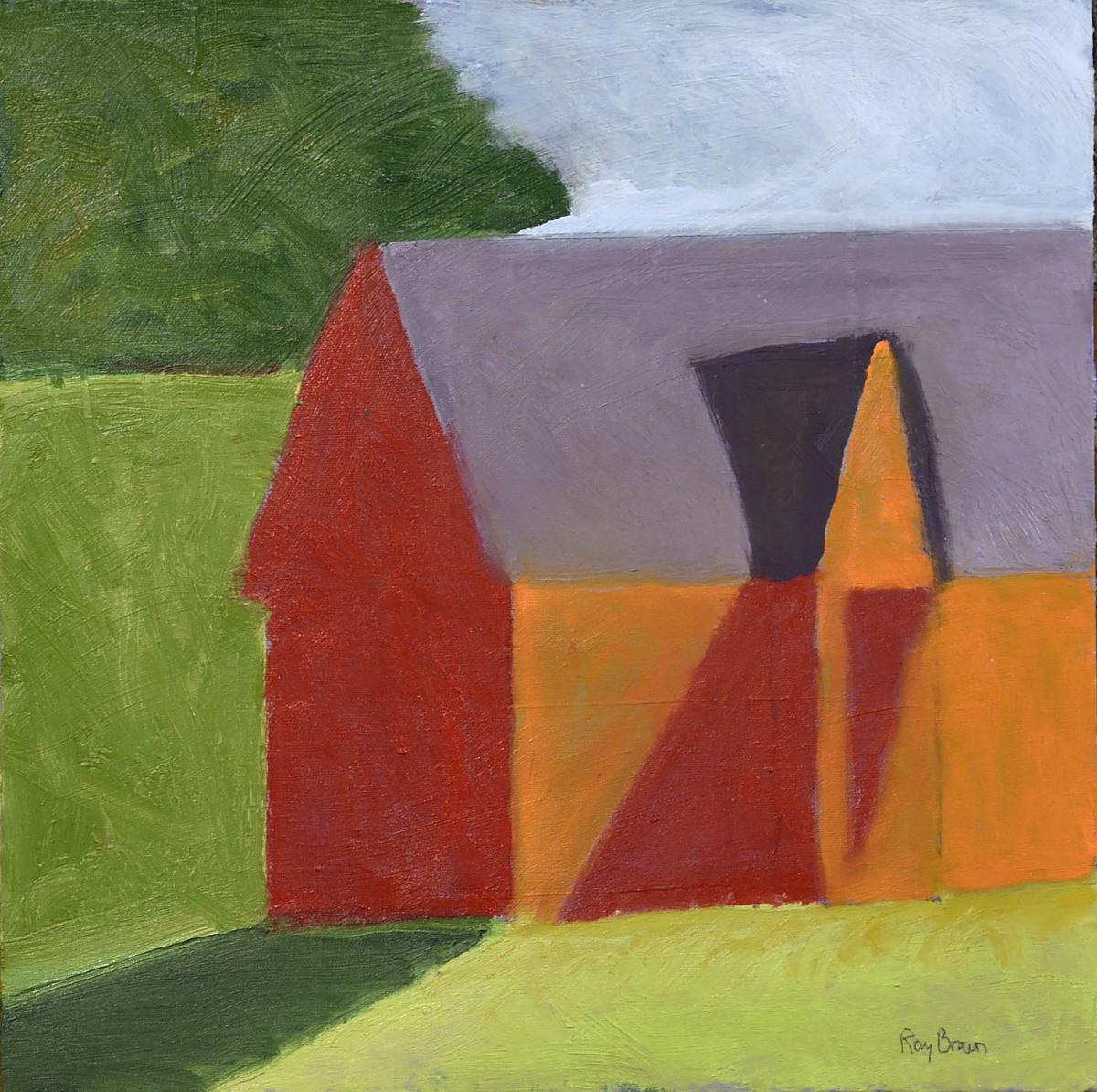 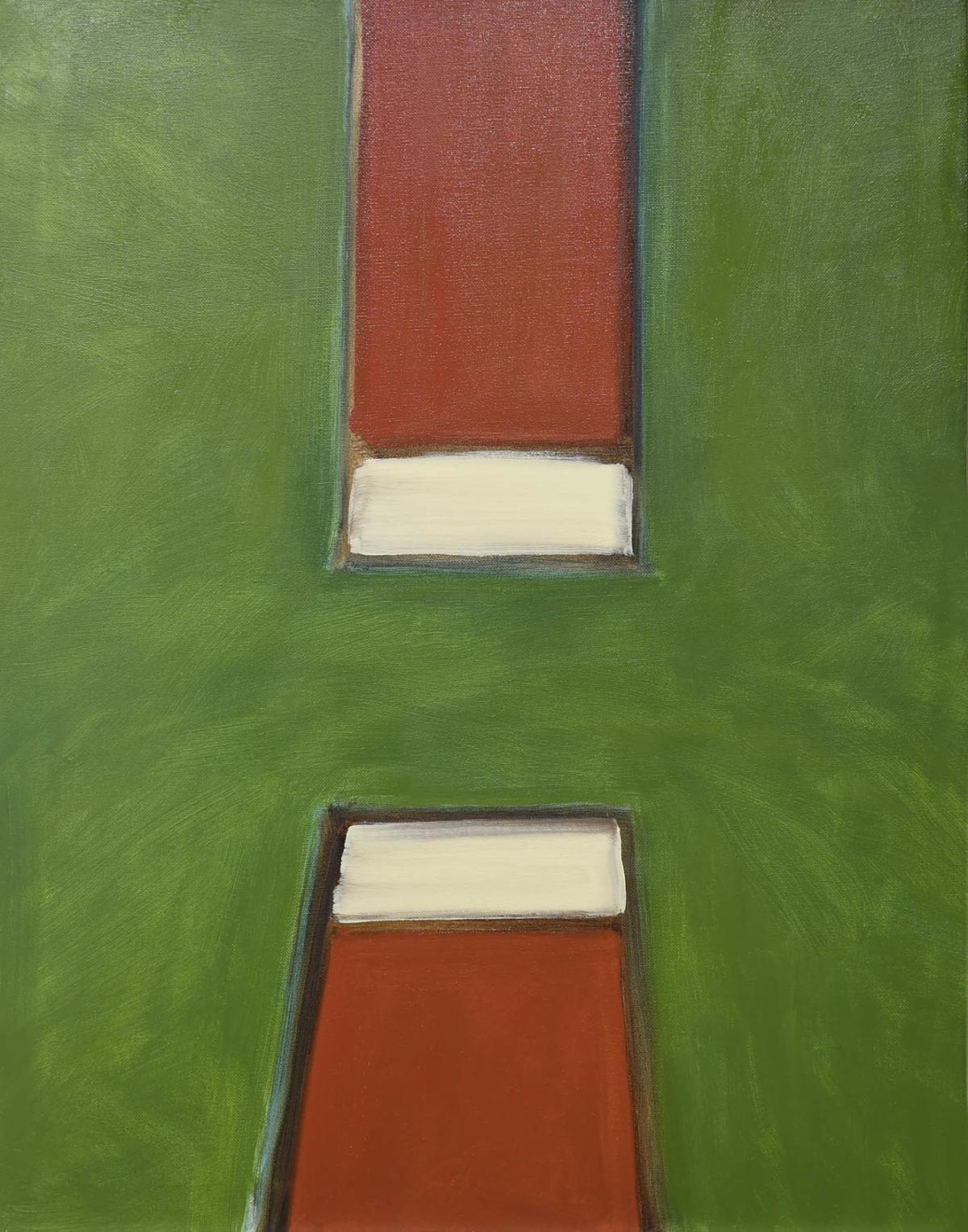 Acclaimed Montpelier artist Ray Brown at the opening for his show “Tumbling Toward the End,” at the The Front gallery in Montpelier.

Editor's Note: Artist Ray Brown passed away peacefully March 13 at his Montpelier home, with his wife, Jody and dog Max at his side, after suffering from respiratory and coronary illness.

Rectangles of greens, blue, pale yellow, terracotta red evoke a sense of rural landscape, bringing to mind fields and structures under broad skies. Across from this set of 2012 artworks by Montpelier artist Ray Brown is a group of still lifes, each oil painting of a vase with one or two stems of flowers — daffodils, red tulips, yellow irises among them. A quality of understated elegance pervades in these 2019 paintings.

These abstracted landscapes and compelling still lifes are among the paintings in the solo exhibition “Ray Brown: Tumbling Toward the End.” Brown’s show is the first solo exhibition ever at The Front, a cooperative gallery that has been presenting group shows of its members’ works on Barre Street in Montpelier since 2016. “Portrait of an Artist,” a documentary film about Ray Brown by filmmaker Nat Winthrop, will be screened at the Front at 2 p.m. Sunday, March 22.

“Tumbling Toward the End” features artwork by Brown in several different styles, all painted during the last 16 years, the period since he had a major stroke. During these years, along with the physical adjustment of teaching himself to paint with his left rather than formerly dominant right hand, he has taken his art in fresh directions. Selections of five different bodies of Brown’s work are included in the show — from still lifes he meticulously sets up in his studio with neighbors’ flowers in vases to abstract works inspired by landscapes of Vermont and Italy.

A second sampling of Brown’s work — all new work — is exhibited this month at the Drawing Board on Main Street in Montpelier, as part of the independent art supply and custom framing store’s 45th anniversary celebration. Now owned by Liz Walsh, the Drawing Board was owned by Brown and his wife Jody Wilson Brown for many years. An installation by Jody Brown is in the store’s front window. Originally part of an outdoor nighttime installation, the “Illumination Collection,” the strands, bubbles and twists of the piece play with light.

Ray Brown chose “Tumbling Toward the End” as title for this exhibition from the 2017 book of poems by his friend, the late poet David Budbill. The volume, “like Ray Brown’s work, considers beauty along with imminent mortality, and what it means to have a fleeting present and a fickle body,” reads The Front’s gallery introduction to the show.

Brown, now 79, has an artistic career already spanning over 60 years. Originally from Boston, a topnotch hockey player in his youth who barely missed a spot on the 1960 U.S. Olympic Team, Brown studied art at the Massachusetts College of Art, graduating in 1963, later earning his master of fine art at Cranbrook Academy of Fine Art in Michigan.

The Browns moved to Vermont in 1983 and bought the Drawing Board, balancing their creative work with the store. Brown’s major stroke a decade and a half ago profoundly affected his mobility and use of the right side of his body.

“After a year in a wheelchair, I learned to function again and returned to my studio and started painting with new skills. I started to paint with my left hand. Now I see that my handicap forced me to make changes in my painting that I really like,” explains Brown in his website artist’s statement.

“I am inspired by the landscape but I consider myself an abstractionist,” Brown notes.

A post-stroke trip to Italy inspired a new way of seeing and painting for Brown. It inspired him in terms of palette and proportion, but also in a process of painting from memory.

In “View of Lucca,” from 2013, a cluster of geometric cubes in marigold yellows, sandstone, burnt oranges evoke a sense of a community anchored in the land, drawing the viewer in to the proportions. A lighter palette pervades in three “Assisi” paintings from 2016 with broad fields and bands of color, black outlines defining their boundaries.

Besides his abstractions, Brown also turns to more figurative painting. Along with the flower and vase pieces, wonderfully evoking spring, the show also includes a trio of small still life “Light Vessels.” For these, Brown arranged a vase and two bowls in his living room studio in their Montpelier home. In three different neutral palettes, in different light, in different arrangements, shadows falling at different times of day, each one stands on its own but are a delight together.

Vermont’s landscape with barns, a theme Brown explored at different times in his career, also makes a strong showing with selections from 2008 — “Blue Sky” and “Gray Sky” among them.

The Front gallery presents “Ray Brown:Tumbling Toward the End” at 6 Barre St. Montpelier through March 29. Hours are: 4 to 7 p.m. Friday, 11 a.m. to 5 p.m. Saturday-Sunday; call 802-552-0877, or go online to www.thefrontvt.com. “Portrait of an Artist,” a documentary film about Ray Brown by filmmaker Nat Winthrop will be screened at the Front at 2 p.m. Sunday, March 22.