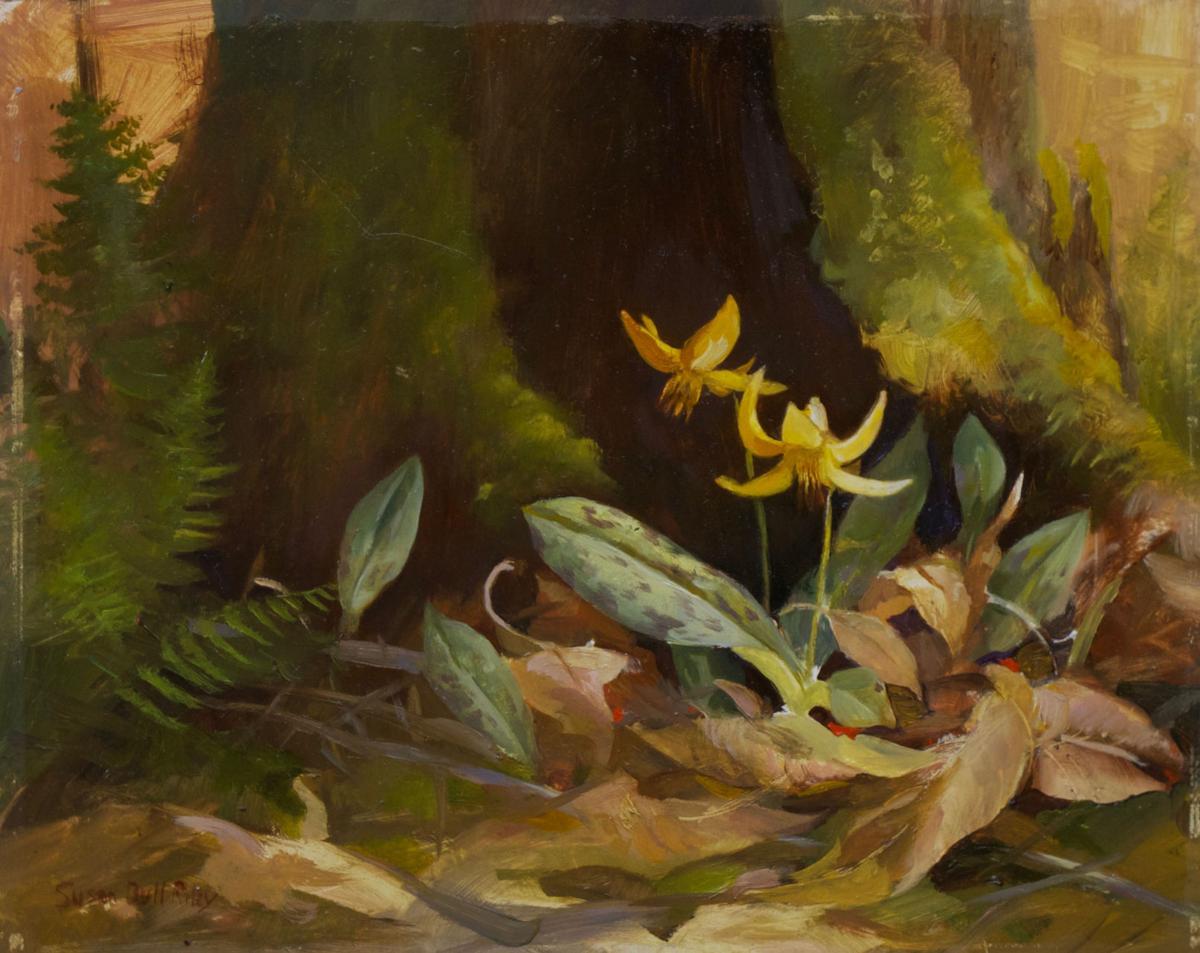 The Gallery at Highland Center for the Arts in Greensboro is expecting to open soon for viewing for limited numbers of visitors following safe distancing and other safety protocols. 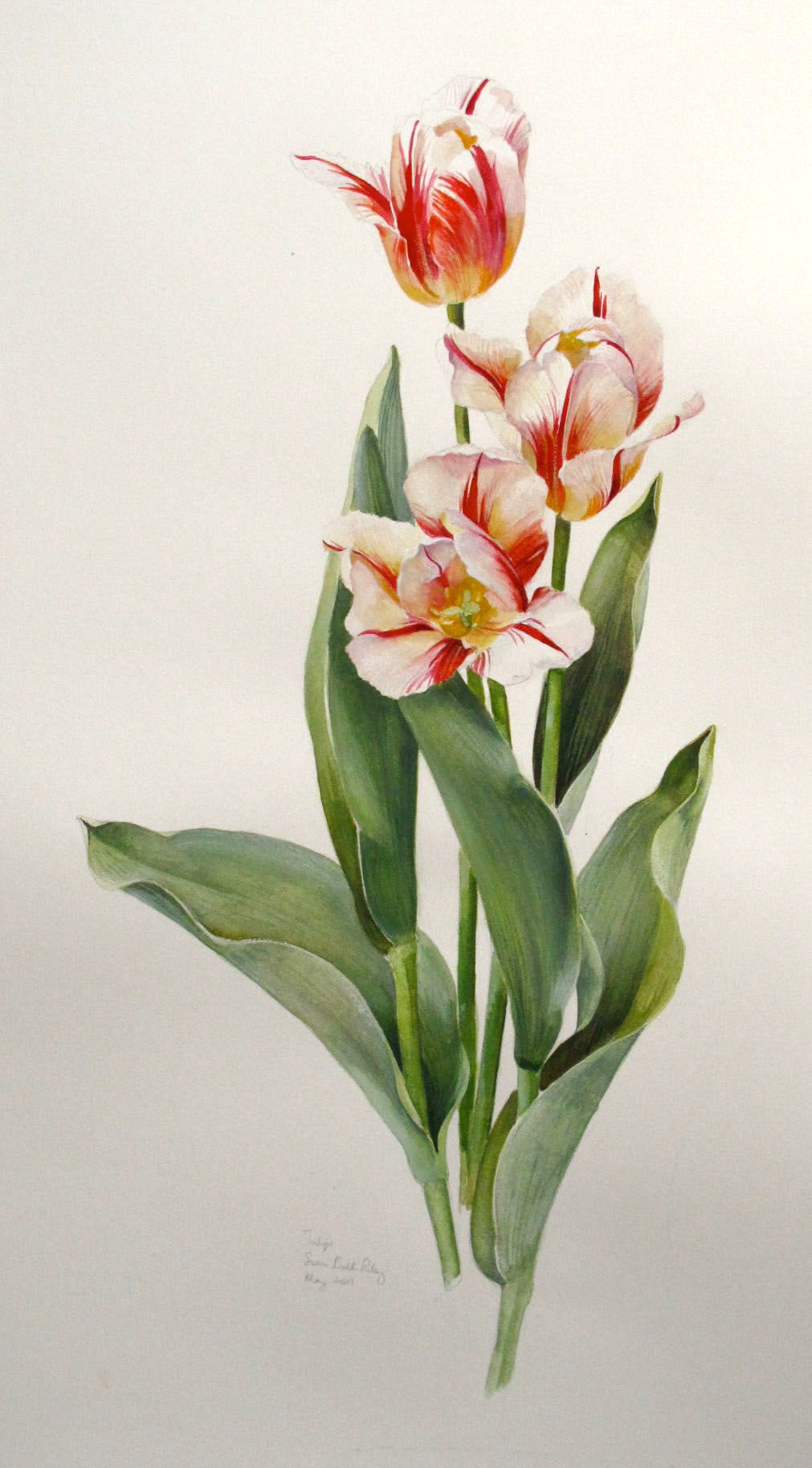 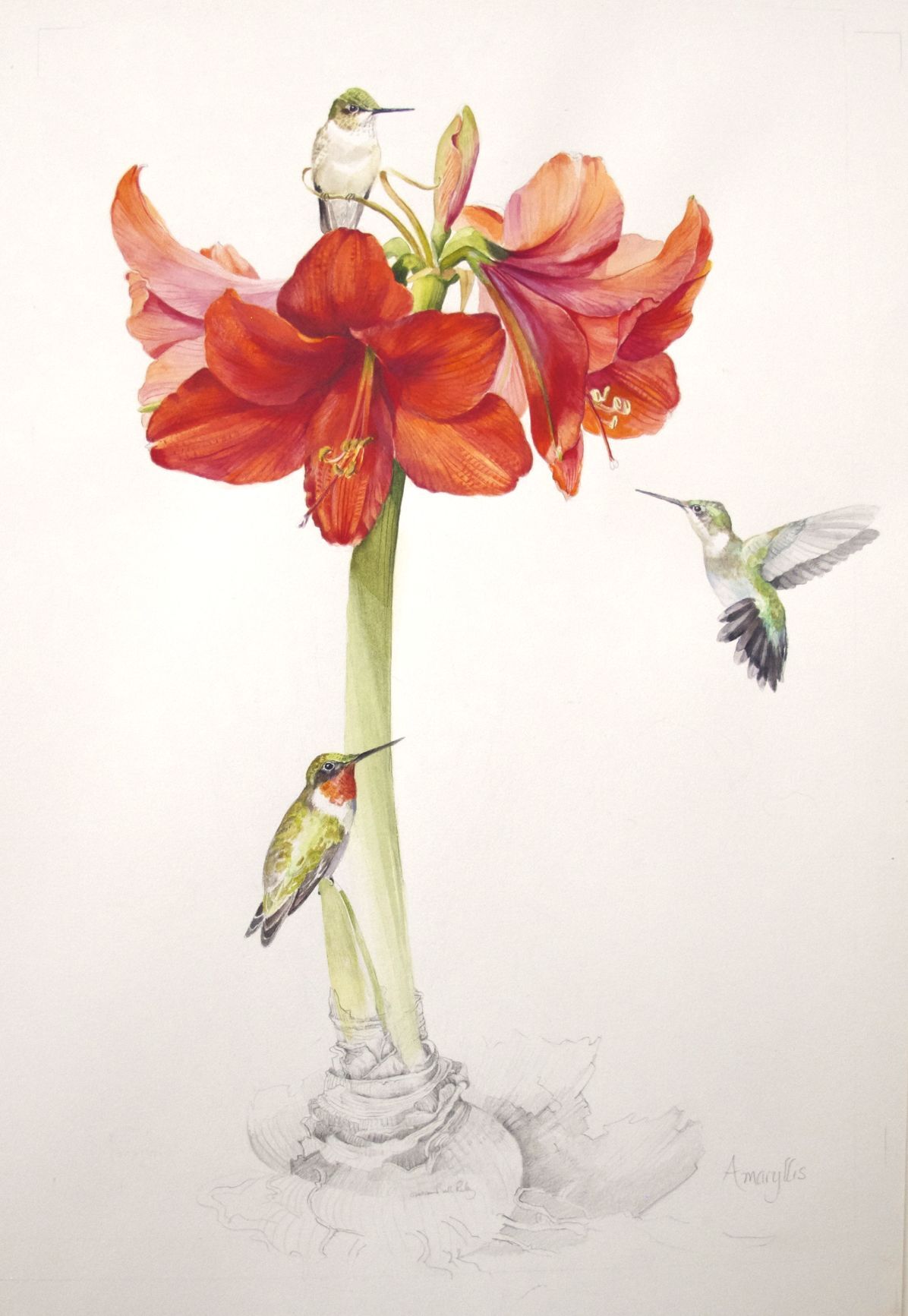 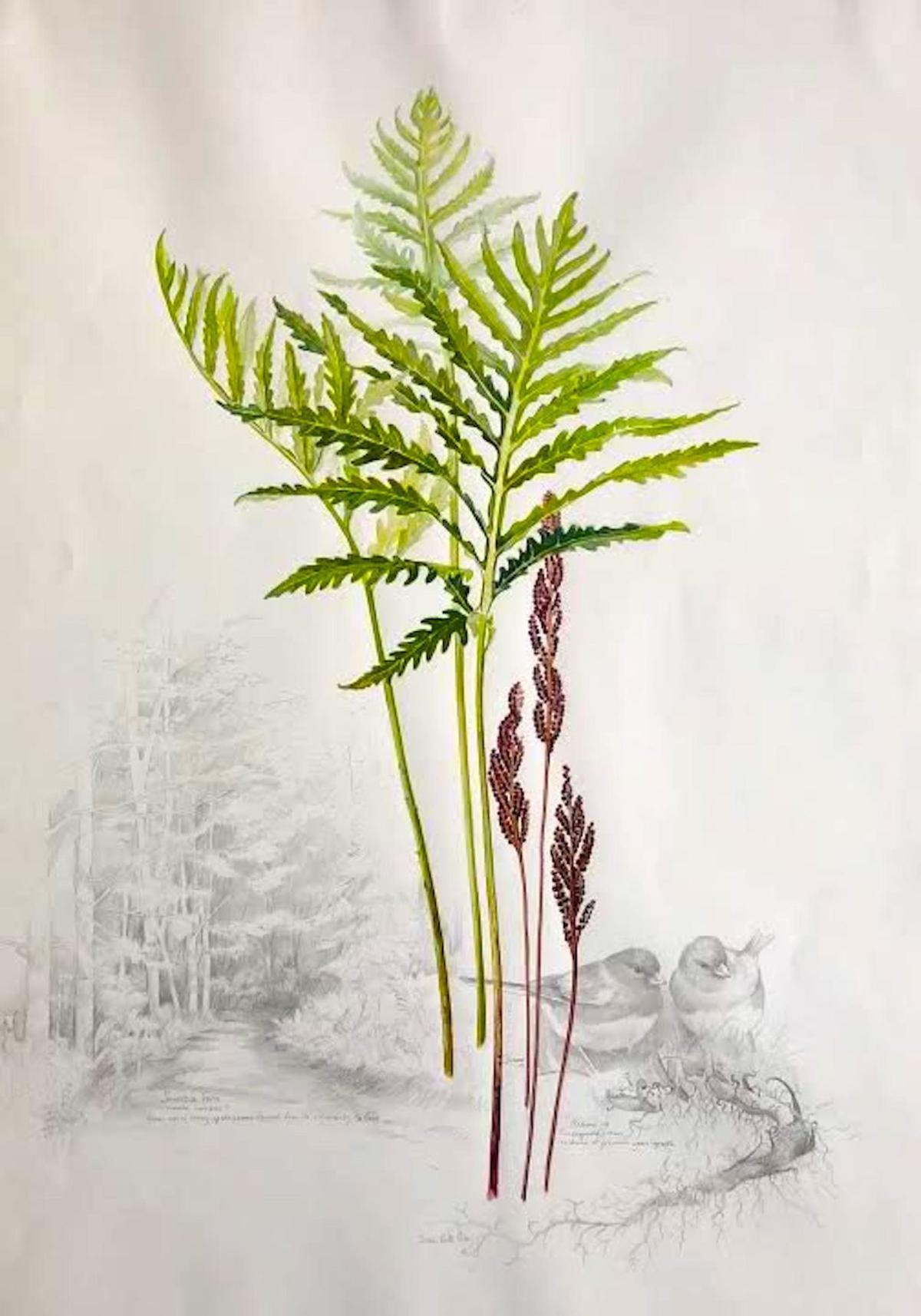 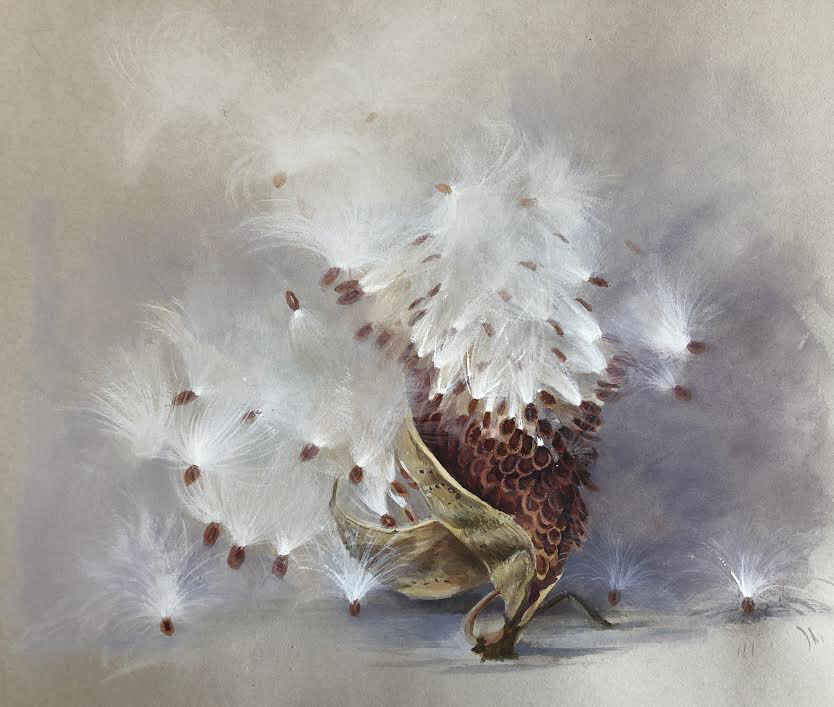 The Gallery at Highland Center for the Arts in Greensboro is expecting to open soon for viewing for limited numbers of visitors following safe distancing and other safety protocols.

Graceful slender stems, yellow-green fronds, and bead clusters, the subjects of Susan Bull Riley’s pair of watercolors of onoclea sensibilis are certainly a familiar Vermont sight — we traipse past them on walks, see them along stream banks and thickets, even in roadside ditches.

Bull Riley’s life-size paintings of these sensitive ferns don’t just show the natural beauty of the flora. The verdant plants emerge from faint graphite drawings at their bases, drawing viewers into their habitat with accompanying fauna, a glimpse of the roadway where she found them.

Susan Bull Riley’s solo exhibition “Intimate: An Artist & the Natural World” at The Gallery at Highland Center for the Arts in Greensboro brings viewers close to Vermont flora and some fauna, to see it with a fresh eye. Her watercolors, drawings and one oil painting invite viewers to pause and experience ferns, milkweed, cattails and other life around us.

“She has an intimate relationship with the natural world and she shares that in her paintings,” said Maureen O’Connor Burgess, director of The Gallery.

“My relationship with the natural world has become more intimate because of her. In seeing these paintings, I’m more aware of the bloodroot, trilliums, trout lilies — I know they’re out there,” O’Connor Burgess said.

Bull Riley’s exhibition was originally supposed to open in March, but like so much in Vermont, the schedule was upended by COVID-19. The Gallery has been closed for the past two-plus months, but viewers have been able to see much of the show online through Vermont Art Online and its Virtual Exhibits Catalogue that has links to more than 30 galleries and museums in the state. The Highland link gives a video tour of the show as well as wall-by-wall images with close-ups and remarks from the artist about some of the paintings.

The Gallery at Highland Center for the Arts is expecting to open soon for viewing for limited numbers of visitors following safe distancing and other safety protocols.

“I enjoy both the quiet energy of botanicals and wilder, energetic big oil paintings,” said Bull Riley, who lives in East Montpelier and is known for her watercolors as well as her oil paintings, often of landscapes.

Her studio, she noted, is split between the two, as she goes back and forth between a delicate watercolor detail and big canvases and big brushes. At present, she is working on a series of large format views of and from Mount Mansfield as well as watercolors of the alpine and other flora there.

In “Intimate: An Artist & The Natural World,” Bull Riley brings together her heartfelt awe of plants and animals around her with exquisite composition and detail.

Each painting, Bull Riley explained, “starts with a lifelong fascination and deep appreciation for something that’s common, and I revisit that object of interest over and over until it’s not just expressing my fascination until it meets a high bar of composition, interest and color. Composition is primary, then I get the pleasure of the detail.”

“Behind every painting is a great deal of rigor. I trained myself to do botanical watercolors where you marry precision-faithful observation and artistic design. I do lots of sketches, lots of iterations,” she said.

“I want each painting to bring emotional resonance to the things I value,” Bull Riley said.

Her affection is evident throughout the show. In each of a series of four watercolors of milkweed pods, she captures the moment when seeds burst forth, silky parachutes carrying them into the air. For the paintings, Bull Riley carefully collected pods she wanted to paint.

“I call it auditioning, I go through our patch to find just the right ones,” she explained, noting that she then took them into her studio, where she painted — and had fluff around for weeks.

For her drawing “Cattails and Five Spring Peepers,” she also brought the plant indoors.

Working in her studio, Bull Riley noted, “I can set it on table and have the intense pleasure of really seeing it and studying it.”

The peepers, certainly less patient, she added later, an addition that, she noted, “imbues the drawing with the richness of a lifetime association of springtime. A chorus of peepers is always an affirmation of spring.”

In the studio and outdoors, Bull Riley explained, she strives, “to marry the pleasure of observation with the rigor of creating a finished painting that does the subject justice.”

Highland Center for the Arts

The Gallery at Highland Center for the Arts, 2875 Hardwick St. in Greensboro, presents “Intimate: An Artist & The Natural World,” by East Montpelier artist Susan Bull Riley. Details of the opening are coming soon: call 802-533-2000, or go online to highlandartsvt.com. To visit Highland Center or any of 30-plus other Vermont galleries and museums online, at Vermont Art Oonline’s Virtual Exhibits Catalog, select “Enter Museum,” at www.vermontartonline.org