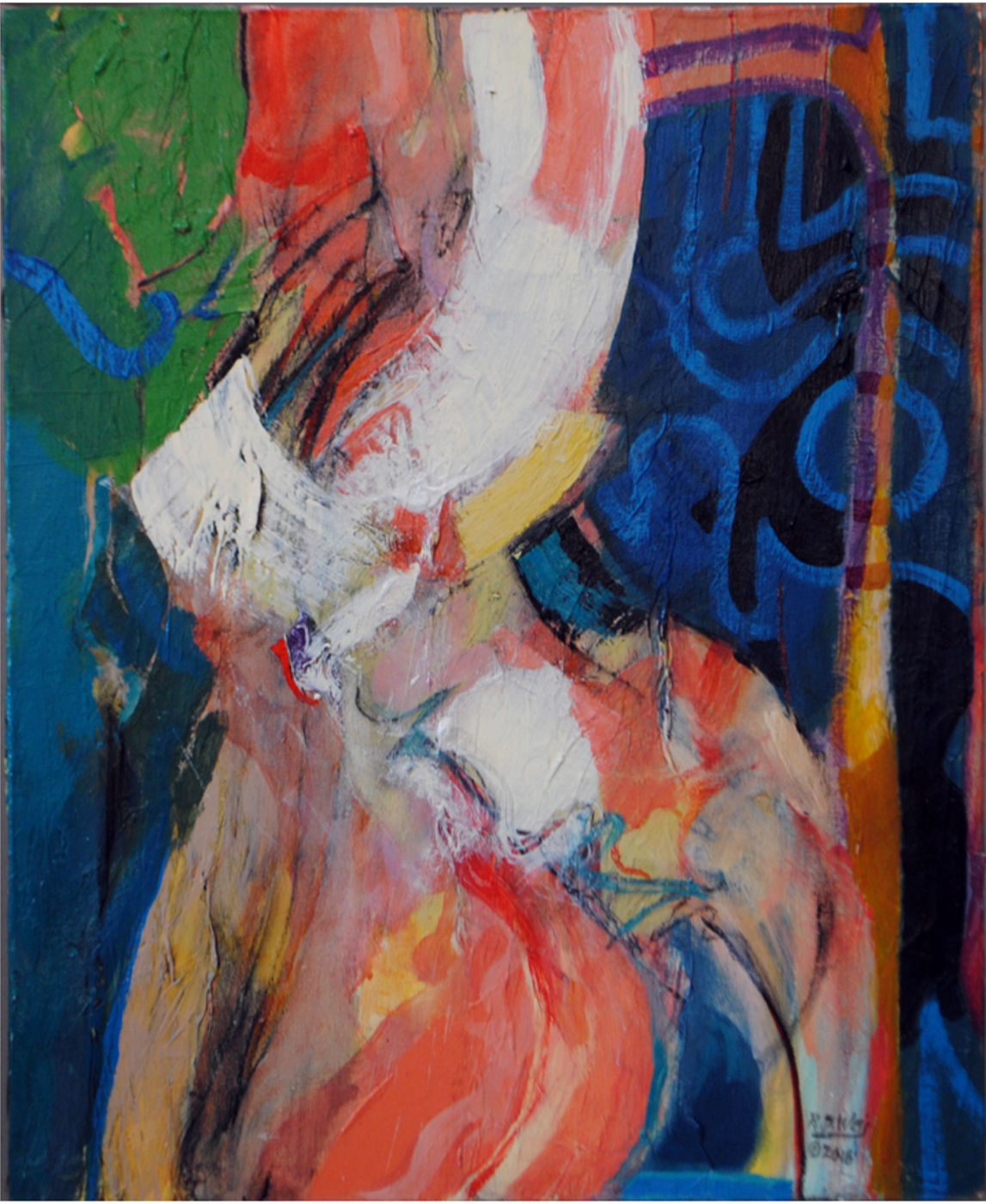 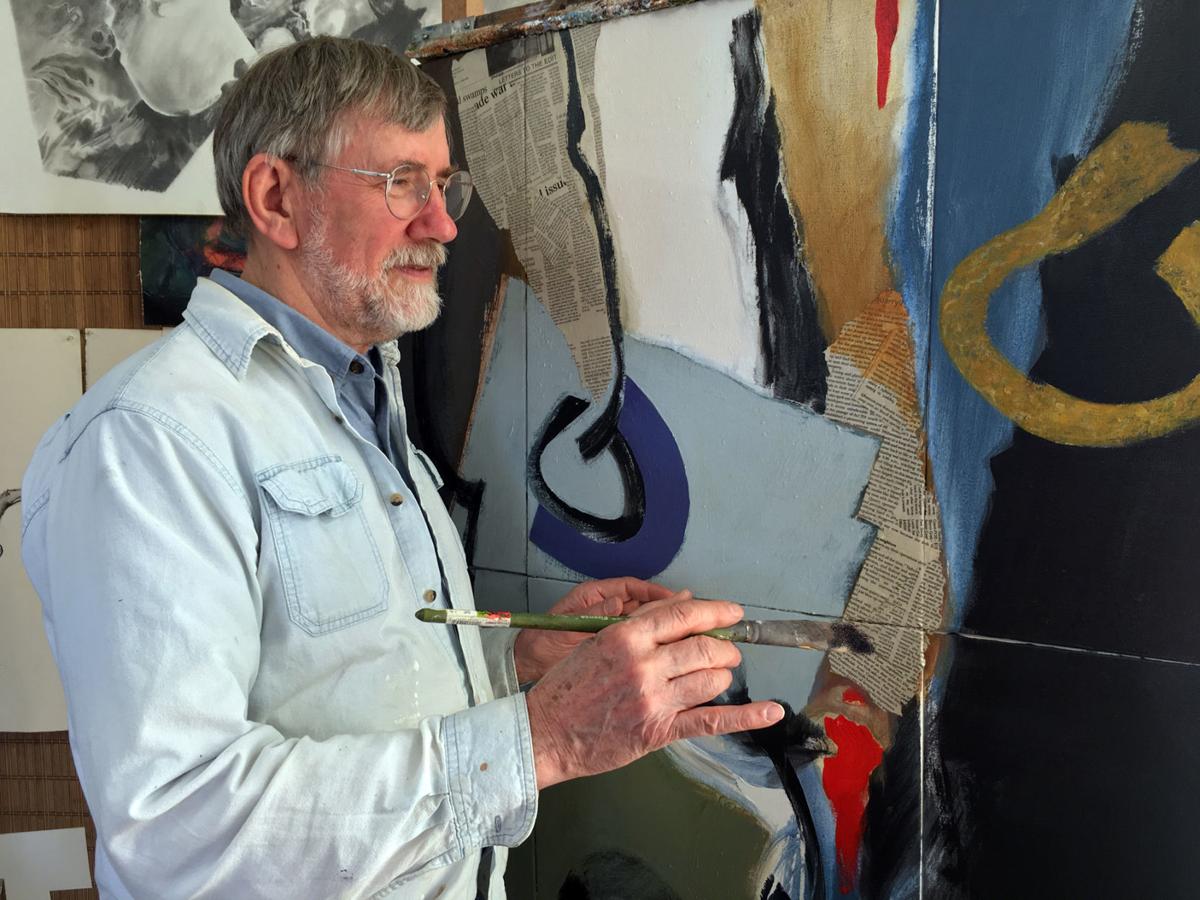 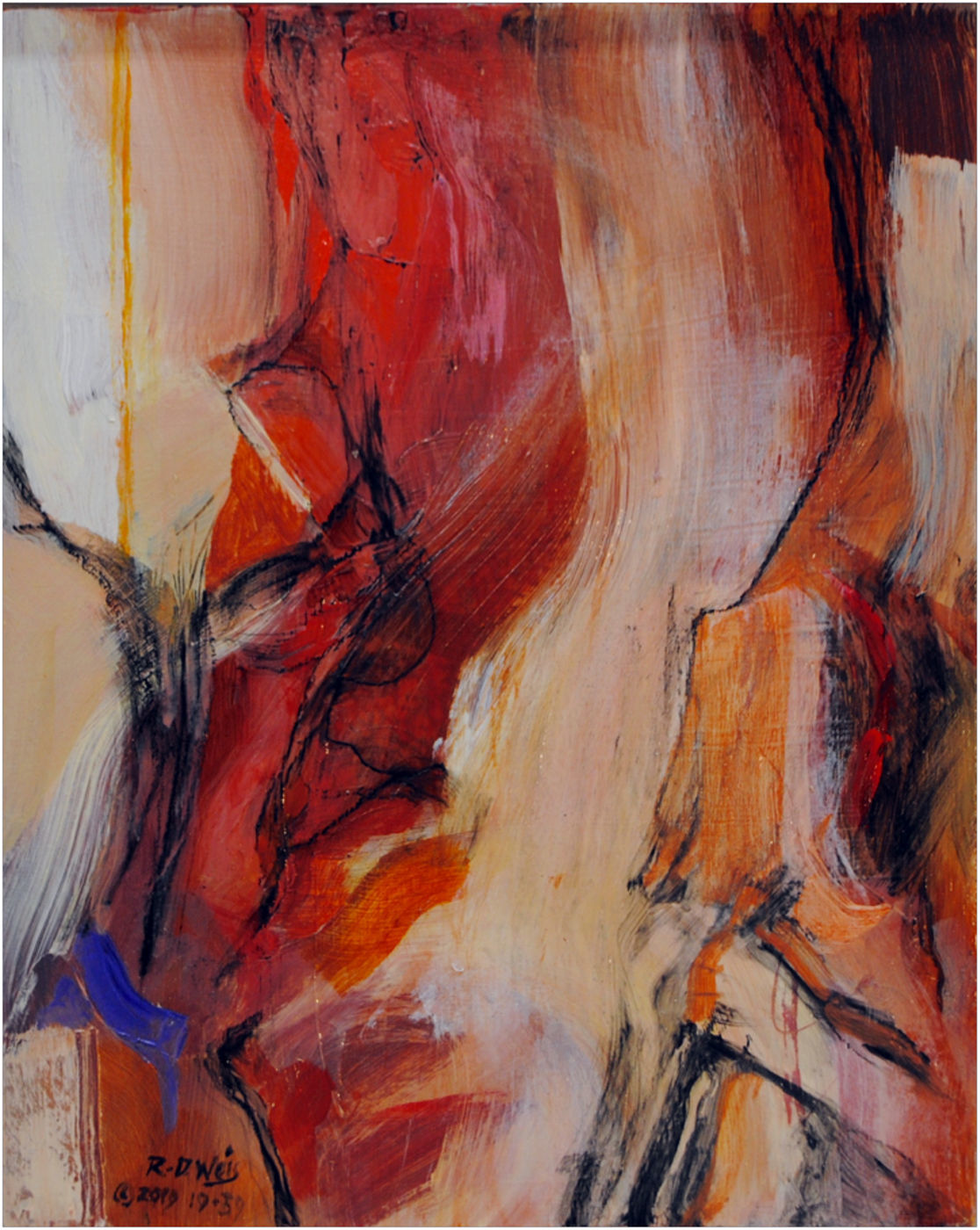 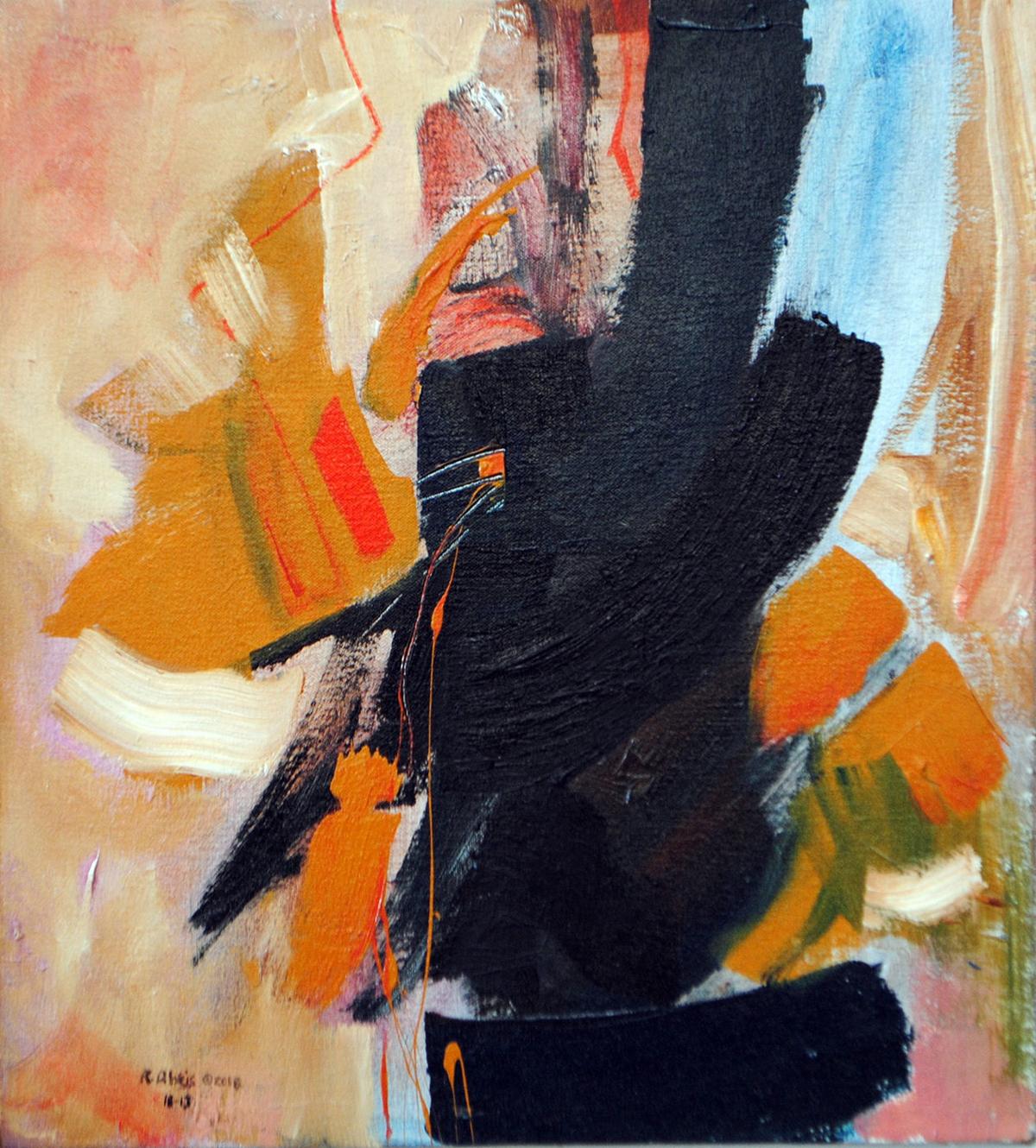 Richard D. Weis’ “Beyond Words” at the stART Space in Manchester.

Richard D. Weis’ “Beyond Words” at the stART Space in Manchester.

Editor's note: stART Space has changed its name to the Ellenbogen Gallery.

“Stunning!” is the first word that comes to mind when walking into Richard D. Weis’ exhibit at the stART Space gallery in Manchester.

The color and light of his gestural paintings fill the space. Weis’ fascination with Asian brush drawing, which is evident in the exhibit, goes back to his time as a student in Bemidji, Minnesota where he grew up and also attended university. The 29 works on display for the first time are the result of his life-long commitment to the study of various painting techniques, from the Old Masters to his most recent experiments with new media.

“Figure: Dancing with Matisse” and “Wanna Dance?” are both works that burst with movement. The Matisse piece makes reference to the cutout shapes that Matisse used in his later work, and although quite abstracted, the sense of a colorful dancing figure fills the canvas. “Wanna Dance?” was inspired by watching a couple at a Stone Valley Arts event. The bold red and black have a Spanish feel and give the impression of a Spanish dancer with romantic veils and a swirling skirt.

“Northwest Passage,” with its deep hues of various shades of blue, has a feeling of broad, open water. Diagonal strokes of red punctuate the painting and set up a dialogue with terse strokes of a rich primary yellow, providing an unexpected “zing.” It’s an unusually textured composition, and Weis talks about painting over canvases that he’s not entirely happy with. In this case, the hidden underlying forms really serve to enhance the piece.

Weis sometimes breaks his paintings up into grids, as in “Border Crossings: Undercurrent” and “Unbound.” The latter is a composition of six canvases that combine painting and collage. Bold brush strokes in black, purple and yellow combine with torn swatches of newspaper in an intriguing study of patterns. A red circle integrated into the painting is actually Weis’ name in Korean. In 2003, Weis spent six months in Daejon, South Korea at Hannam University, which gave him time to reassess his work and to explore his lifelong love of brush painting.

Weis drew the title of the exhibit “Beyond Words” from his favorite poet, Auden, who wrote, “to discover what it is to be human now is the reason we follow this star.” For Weis, painting is the way to express what is most difficult to verbalize. His daily practice of painting attests to his deep commitment to the process of making art, and following his own star.

When I visited his studio on the top floor of the 1906 Journal Press Building in Poultney, I was struck by the sheer number of canvases, ranging from smallish to over six feet in height. Weis is a complex, and very honest artist who is constantly experimenting and attempting to keep the work “fresh.” He talks about painting being a trace of the journey that the painter has gone through to produce the work — an essentially mysterious process. I ask him some questions about his artistic practice in creating the works that now form the “Beyond Words” exhibit.

B.A.: What criteria did you use when choosing the works for this show? I know that you’ve said that most of them had never been shown before.

R.W.: Hmmm … great question. The works in this show are just a small part of what I have done in the past 18 months, and I wanted the show to be mostly of new work that has not been exhibited before. My basic process is to set a lot of work out in the studio all at once and see how they “talk” to each other.

The quality and interactive coherence of the works is of importance. I consider the exhibit itself a work of art in a way, and I want the exhibition to have a life that goes beyond individual pieces.

B.A.: What have been the major influences on your work? What was the effect of your Fulbright at Hannam University in South Korea on your evolution as an artist?

R.W: I had very little exposure to art or artists as a child in northern Minnesota. My greatest influence was Keith Malmquist, my junior high art teacher. After serving a stint in the army he went off to study with Josef Albers and returned to teach at Bemidji State College where he introduced me to the Bauhaus, color theory, and artists like Kandinsky and Paul Klee. Later, living in Washington D.C., I haunted the Rembrandt room in the National Gallery, reexamined my early interest in Asian brush painting, and discovered artists like Robert Irwin. I am intrigued by the way different artists think, the variety of ways people perceive the world and express their thoughts in visual terms.

During my Fulbright in South Korea, I arranged meetings and studio visits with about 75 Korean artists. Many of these artists had been to the Vermont Studio Center in Johnson, Vermont and we had a lot of fantastic discussions. Even though the work was quite diverse, I began to see that there was a cultural underpinning, or foundation in their work that was reflected in their heightened sensitivity to the qualities of the materials they were using. I came back with a renewed sense of the important relationship between craftsmanship and expressive form.

B.A.: Why do you involve yourself in every step of the process, choosing a particular weave of canvas, stretching it, making frames, etc.?

R.W: It started simply when, as a young artist I didn’t have the resources to buy ready-made materials, so I learned to make the most of what I did have available. The materials themselves sometimes suggested avenues of exploration. I began to really appreciate how the artist’s understanding of materials, at all levels, related to the expressive quality of the work. Being conscious of one’s materials, their potential and limitations, is important.

B.A.: You taught for 21 years at Green Mountain College. What is the relationship between teaching and your own art practice?

R.W.: The strongest relationship between teaching and my own practice is what I learned from the students. Each day we were together, talking the game, talking about art and what we were doing. This forced me to reevaluate my own practice on a regular basis. I really liked teaching in the liberal arts program, working with students with a variety of interests who were coming from a variety of backgrounds. The broadened insight I gained from this was helpful in my own work.

B.A.: Do you have a favorite medium? Is it difficult to combine different media as you do in many of your works?

R.W.: Each medium has potentials and limitations that others do not have, so what is my “favorite” probably depends upon what I am working with at the time. I switched to acrylic for much of my work because of the health dangers of traditional solvents. I do still use oils on occasion, but am exploring the new water-cleanup oil mediums. For drawing, I really like ink/wash drawing using bamboo sticks as a drawing tool. Sometimes I combine media so I can make the most of the unique qualities each media provides.

B.A.: I notice titles like “Present Tense,” “The Sorting of the Day” and “Morning Muse.” Are these reflective of your daily painting practice and working methods?

R.W.: Sometimes I have a grand idea that has been fermenting for a long time before I actually approach it in a painting. Often though, I use what the day will give me. I am constantly trying to be aware of the world around me and use the art as an exploratory tool for things that catch my attention or shape my life on a daily basis. Sometimes these explorations, the very process, will take me places I hadn’t expected, and I find that really exciting. I think of the paintings as artifacts of the journey I am taking.