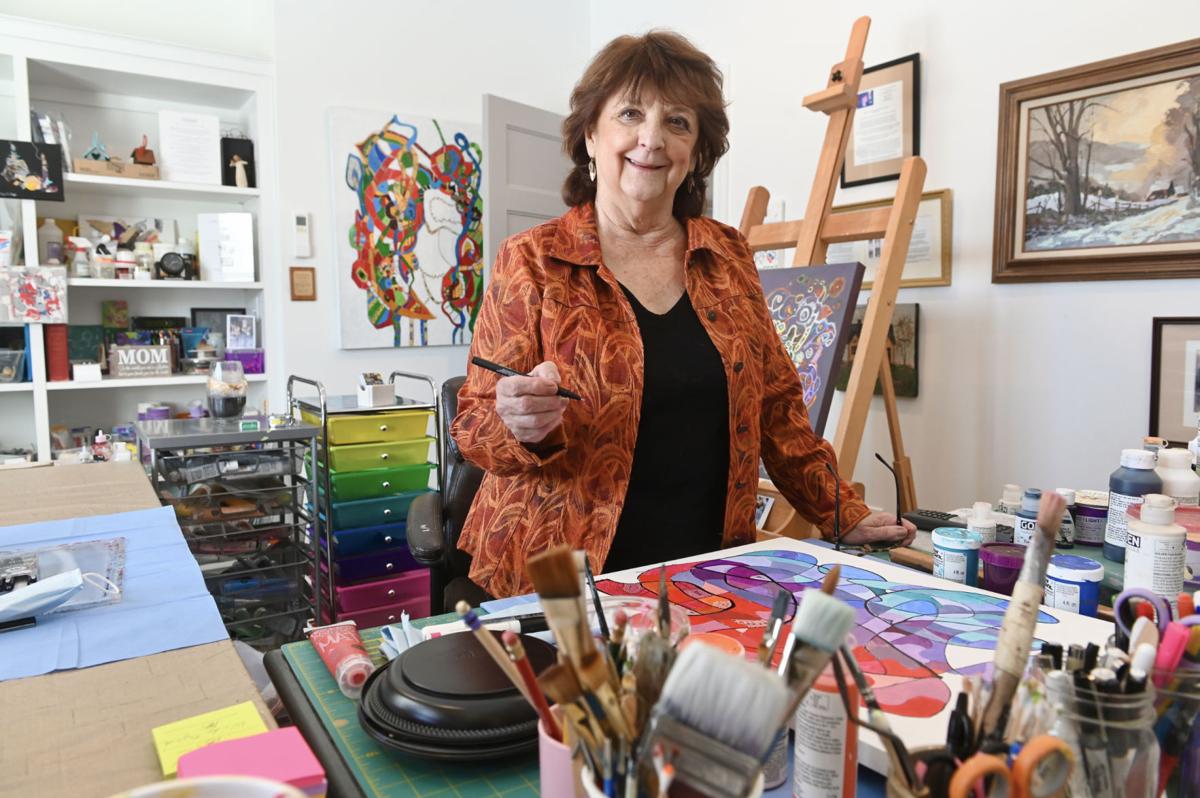 Artist Mary Fran Lloyd works in her Rutland studio on Monday afternoon on an acrylic and ink pen piece, “The New Purple.” The piece is about Democrats and Republicans coming together to form a “New Purple.” 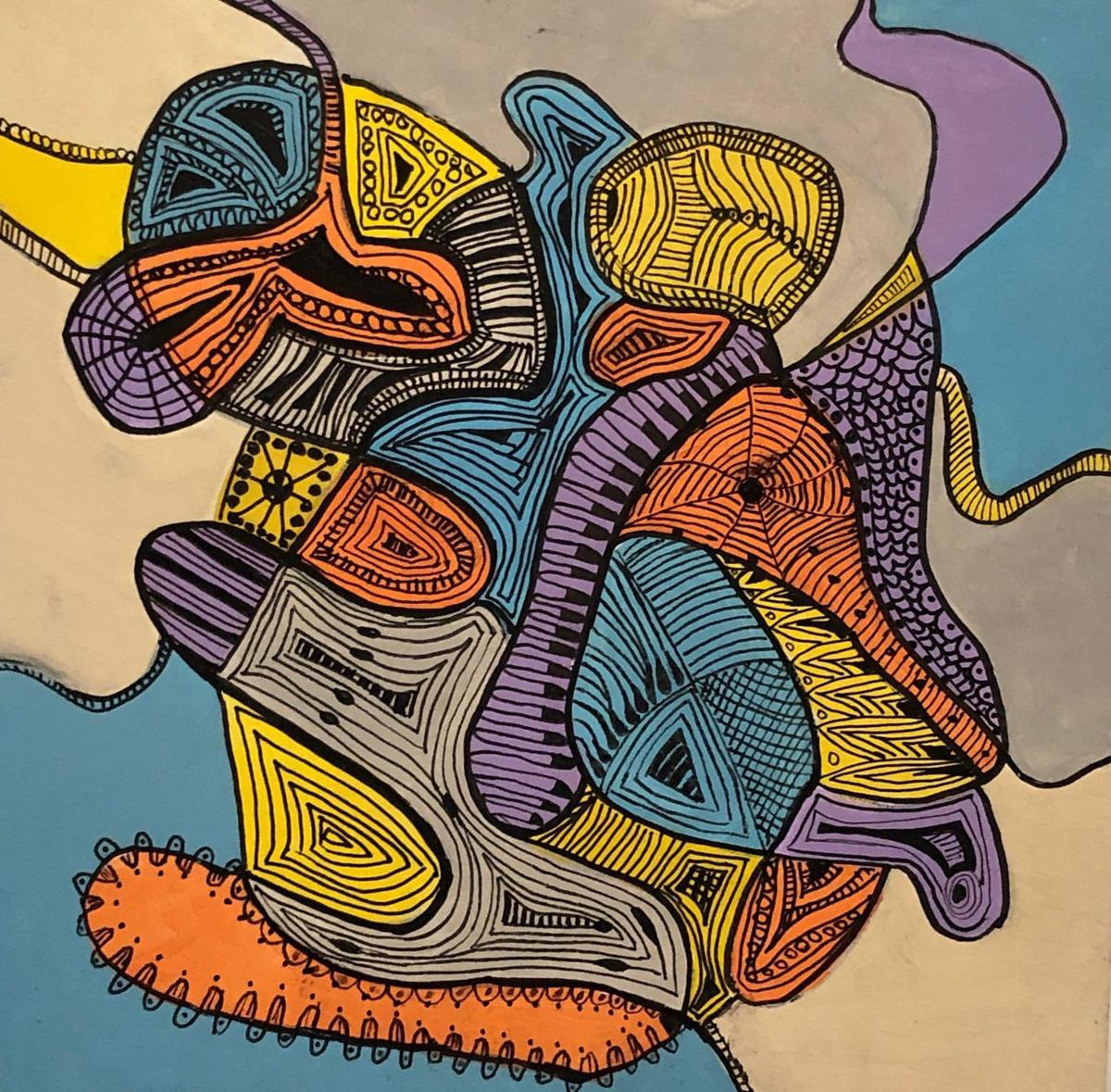 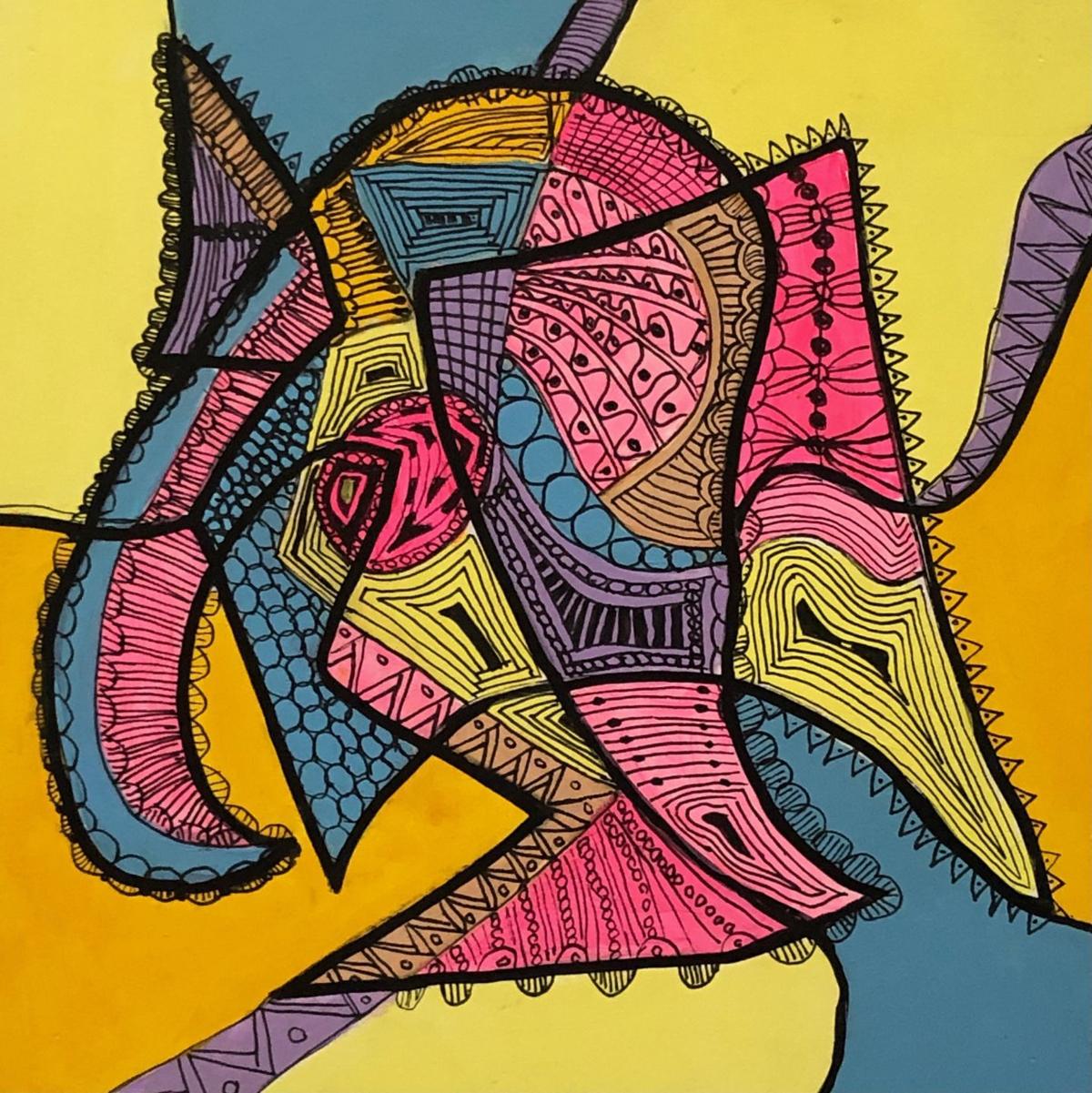 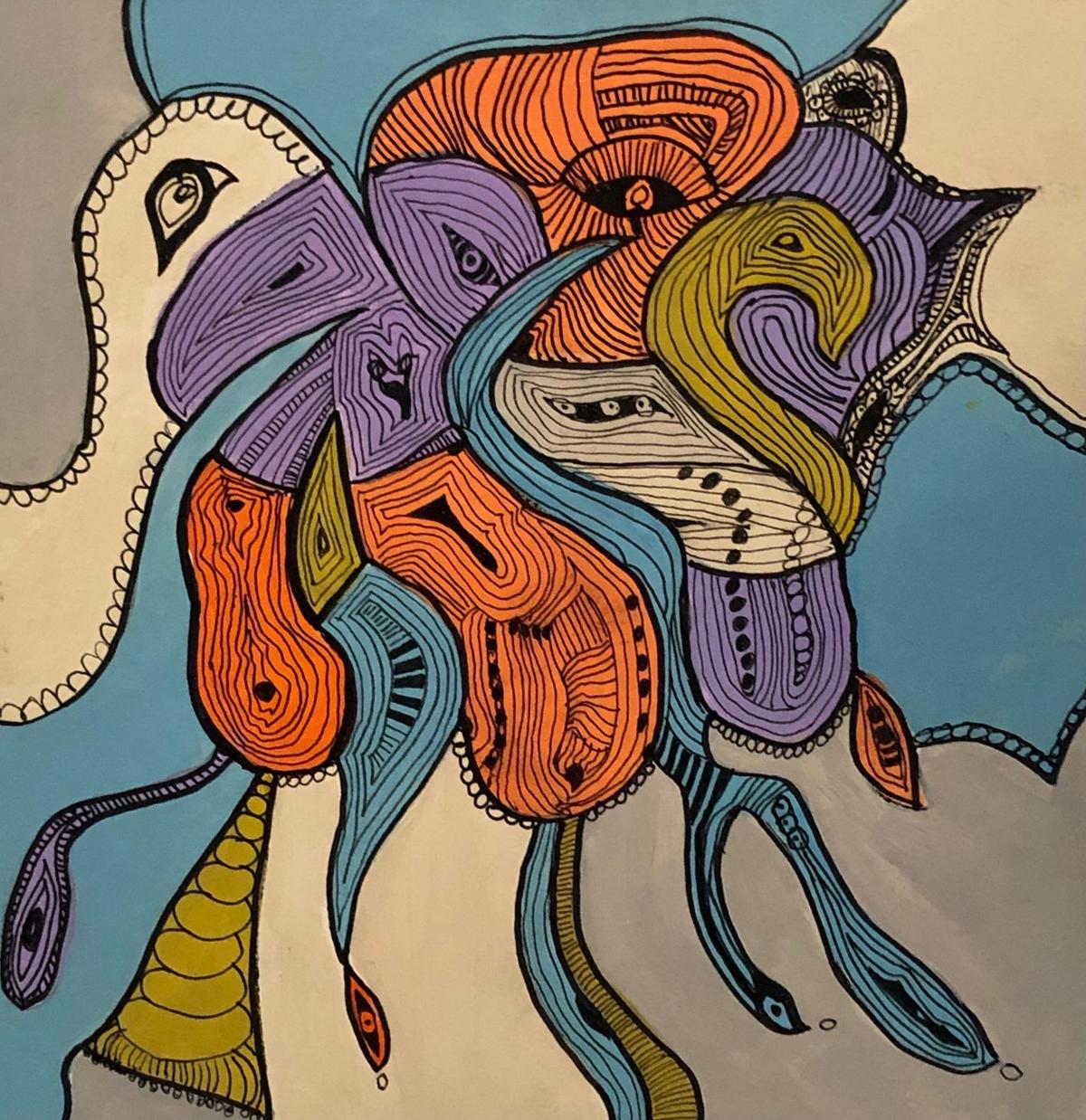 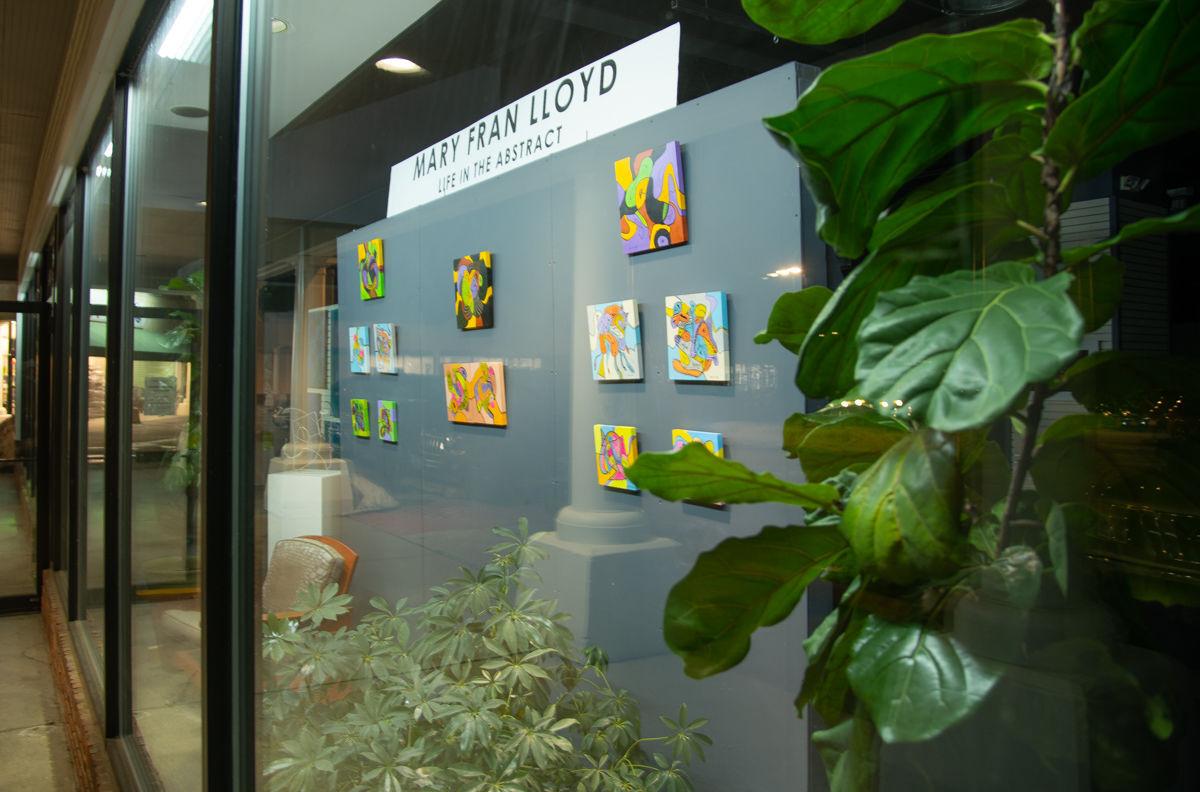 Artist Mary Fran Lloyd works in her Rutland studio on Monday afternoon on an acrylic and ink pen piece, “The New Purple.” The piece is about Democrats and Republicans coming together to form a “New Purple.”

Late last year, Mary Fran Lloyd was bringing some of her artwork to Ellenbogen Gallery in Manchester and just happened to throw one in that was a little different from the others.

“I had this piece with me,” she recalled during a recent interview from her home in Rutland Town. Gallery owner Michael Ellenbogen noticed it and said, “Wow! That’s different for you ... How would you like to do a solo show of a bunch of these?”

“I’d only done one,” Lloyd said. “It was something I was playing with.”

But that kind of switching of styles is just her forte. She spent the month of January creating a dozen pieces that became “Life in the Abstract,” currently on exhibit at the Ellenbogen Gallery in Manchester.

“I picked one and said I really like this,” Ellenbogen recalled in an interview at the gallery he and his wife Carolina own and run. “It’s vibrant, it’s energetic, it’s pop-y, it’s abstract, it’s got little hooks in it that people can grab onto. And it’s fun, and we all need a little fun after this past year.”

His offer was just the inspiration Lloyd needed to embark on a new style, something she’s known for, and loves to do.

“We’ve grown in relationship with about 20 artists, Mary Fran is one of them,” Ellenbogen said. “She has a tendency to move around in styles. She’ll come in with a bag full of art and there will be four, five different genres there within the abstract. Some will be collage, some acrylic and ink, some will be very organic pop.”

When he asked Lloyd to focus on this particular style, it produced an exhibit “where the whole show connects from one piece to another.” The result is an eye-catching display on the ArtWall in the front window at the gallery, which is best viewed from outside after dusk. “Comfort,” “Loss” and “Joy” are some of the titles of the collection, which is full of smaller pieces full of depth, bright colors, and meandering lines that draw the eye and insist that the viewer linger.

“From the outside, it looks great at night because the colors really pop,” Ellenbogen said.

In the gallery’s press release he explained how the pieces were built on acrylic fields of color, with ink lines of varying strength and movement as well as dots and short dashes to give texture, dimension, energy and depth.

And when you meet the artist behind the exhibit, it all adds up. Lloyd is interested in everything, full of energy, with a wicked sense of humor, all of which comes through in Lloyd’s art. She’s studied throughout the years in a kind of self-made curriculum of experimentation, taking advantage of every opportunity for classes with renowned artists like Robert Frick, Peter Huntoon and Richard Weis.

Lloyd’s studio is a wonderland of mason jars filled with paint brushes, shelves stocked with rolls of rice paper, and big plastic storage bins full of art supplies, all set against the backdrop of the view from the incline of Killington Avenue, the city spread out below.

“My studio is in pretty good shape right now,” Llloyd joked. Nearby, two colorful collage pieces were set up on an easel — one of her dog Lizzie, and one of her cat Friday, pieced together from dozens and dozens of collage papers she makes by hand, then rips and fits together in such detail down to the fold of her dog’s ear.

“Most of the time I use rice paper. I have rolls of it,” Lloyd said. “It’s better to rip them than to cut because you don’t get a hard edge.”

“I’ve been doing mostly abstract and collage, and a lot of acrylic,” Lloyd said. “I started doing this type of art probably 15 years ago. I don’t do realism anymore, and I used to do watercolor my earlier years. I really don’t plan it … it’s intuitive. I don’t know where it comes from. I paint all the time. I just (have) fun with it.”

Which explains Lloyd’s inclination to move through different styles. “It’s learning something new. As soon as I learn something new I go back and do it.

“I was always told you should refine one style,” Lloyd said. “Well I haven’t found that yet. I get bored, I have to do something new and different. That’s why I go in so many directions.”

At 75, Lloyd’s refusal to conform to one style and her openness to new ways is inspiring. For now, the abstract is a good fit.

“When you’re 75, there’s a lot of things you think about, and for me to be able to express that, abstract is the best way. I don’t have to paint perfectly.”

“Anybody could do this,” Lloyd added, “if you’re not afraid to let yourself go and figure out what it is.”

Ellenbogen Galley presents “Life in the Abstract,” paintings by Rutland artist Mary Fran Lloyd, through April, at the Manchester Shopping Center, 263 Depot. St. in Manchester. Hours are (call ahead): 11 a.m. to 6 p.m. Friday and Saturday; call 802-768-8498, or go online to ellenbogengallery.art