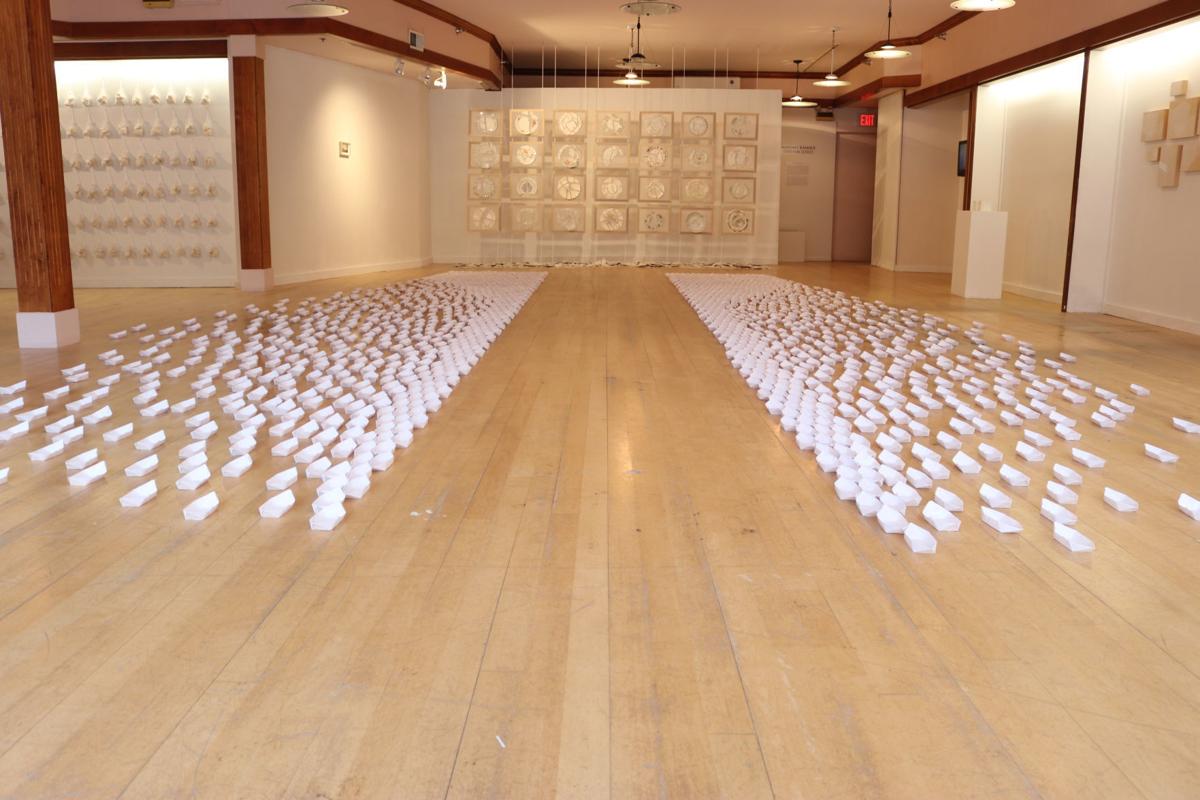 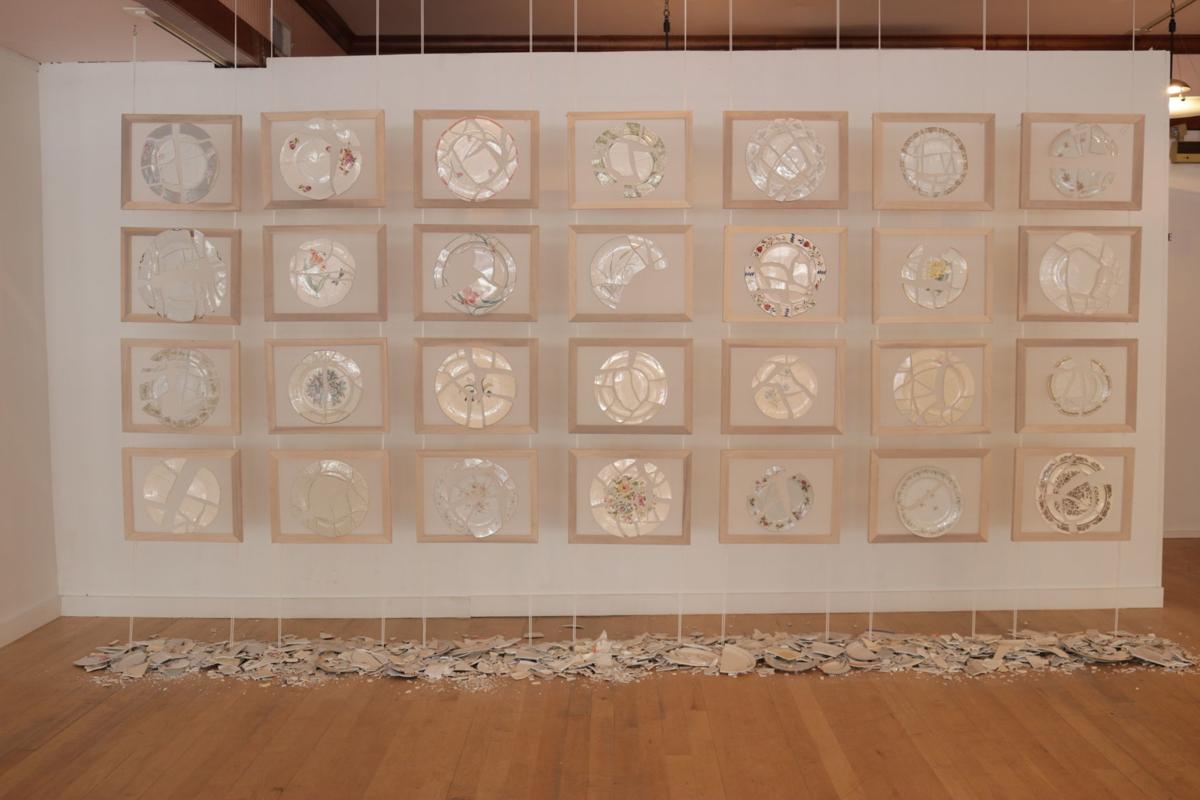 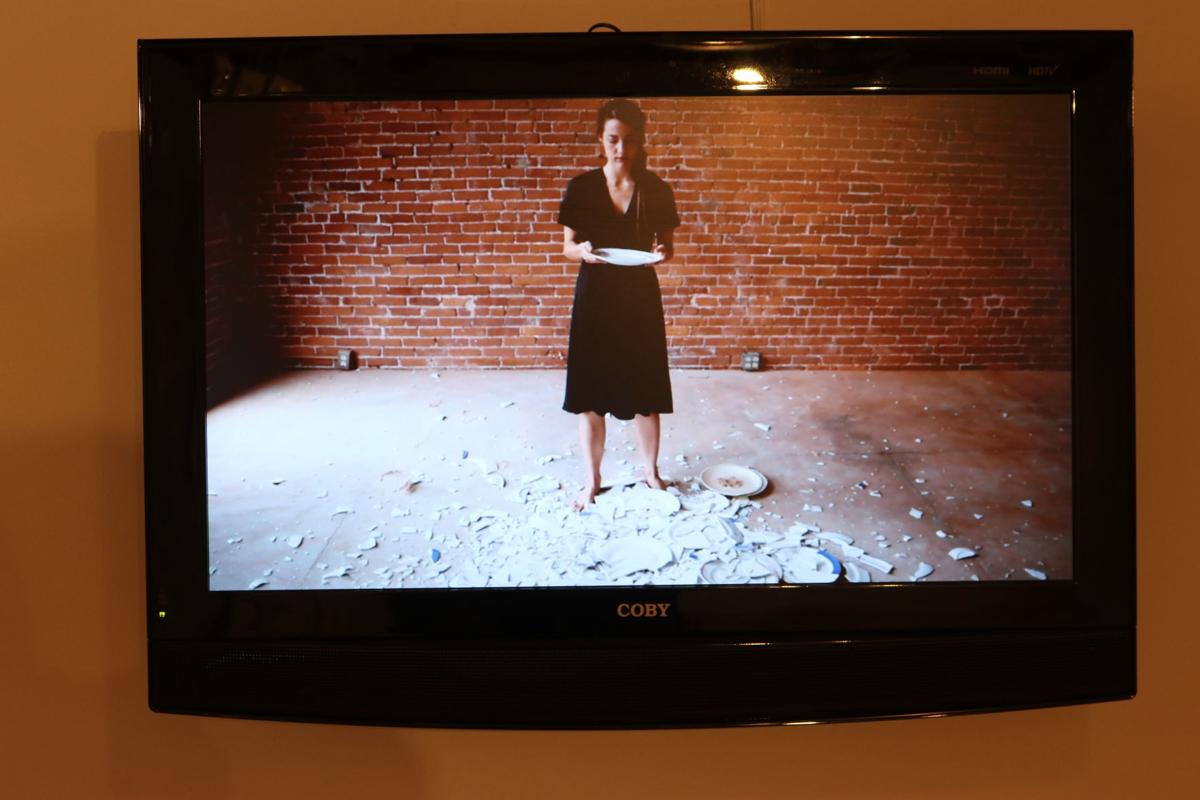 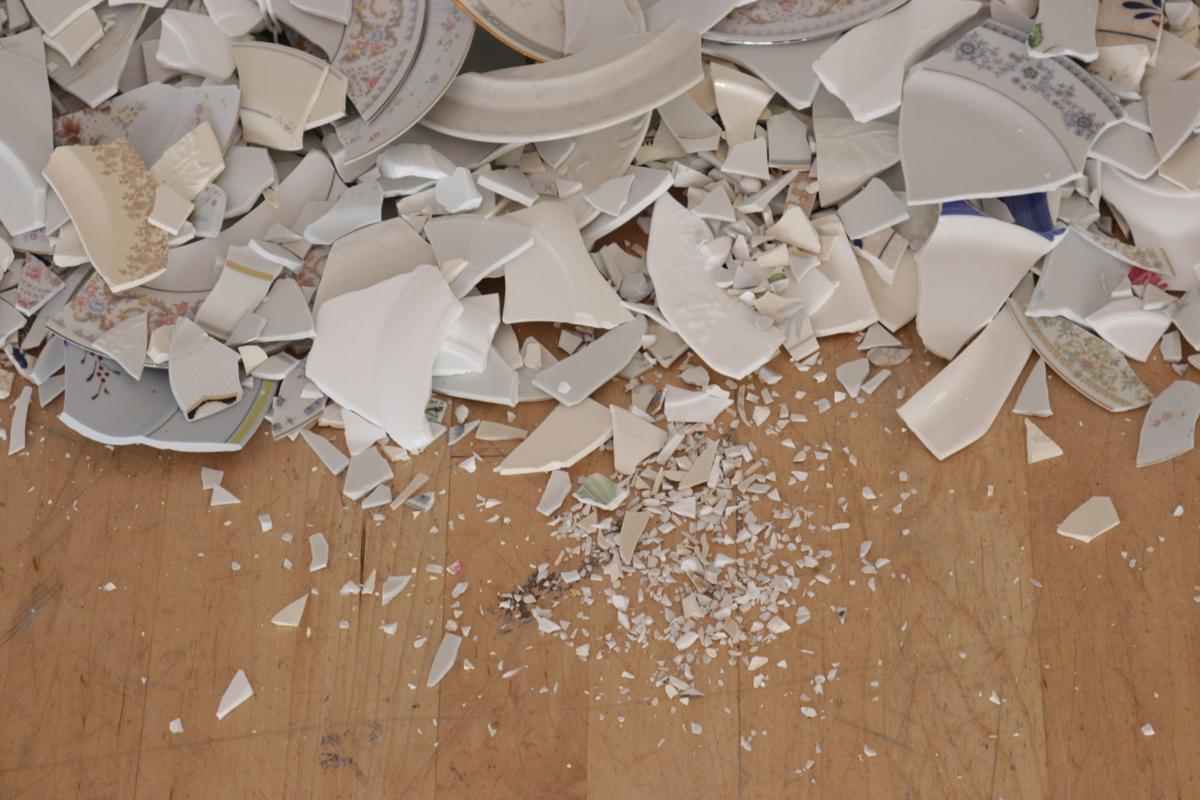 What does it mean to try to recapture that which is gone? What is entailed in materials reconstructions of an intangible past, personal or otherwise? How tenuous is productivity; that term that seeks to capture the relation between labor and product? These are questions Whitney Ramage tackles in Disembodied, her new exhibition currently at 77ART in downtown Rutland.

The first thing that strikes you about the entire piece is its synergistic composition. The 1,800 origami paper boats, all painstakingly handmade to commemorate a departed friend, part in the middle to create a walkway that connects a sheer quilt-like sewn fabric piece with what can only be described as a wall of mosaics of broken plates, each frame attempting to recreate the original from its pieces, each frame failing. At the base of this is the shards of all of this crockery; clearly there is more work to be done.

Moving away from these, the synergy is reinforced by how interconnected the pieces are. The four videos that punctuate the spatial grammar of the show by sitting, in pairs, at diagonal opposite ends of the gallery, relate to other objects in the show. In one video, she struggles to stay afloat in a river using a shiny metallic cube that also sits in the exhibition. Another video shows her smashing the very plates she attempts to reconstruct in the adjacent “mosaics.”

All of these are not a radical departure for the artist. She has spent much of her career investigating the relationship between material forms and the human body, whether it be through her “Grasping Cubes” (2016), which feature in the show, or “Self Portrait by Volume,” where she juxtaposes different forms her body can take next to a clay cube in an explicit comparison of the space they consume.

What makes this show unique, however, are the painful contradictions and absurdisms it embodies, a simultaneous celebration of effort and futility. After the awe of 1,800 paper boats wears off, you are next struck by the sheer repetitive labor behind each work in “Disembodied.” (1,800 handmade paper boats!) Yet, the plates are no longer fit receptacles, and the origami boats only remind us of the parting that is death. It would appear that from the vantage point of a product, the exhibition is one of failures and longing for that which is gone.

However, if one were to think not of destination, but of journey — not of product, but of process — one approaches the work’s contradictions from a different perspective. In failing, one creates something new, if only one is willing to consider the results on their own merits, as their own beings. The show is not a celebration of futility, but of the fruitful possibilities that exist therein. This is at the root of many scientific discoveries, and also of the Japanese art of kintsugi.

It is also at the root of life. Life may be marked by futility, yet there is much joy to be found in living, in trying. Like Ramage, we stay afloat and build mosaics, looking at the present not simply as a product of the past, but as a continuous reconstruction that is never perfect, but also never done.