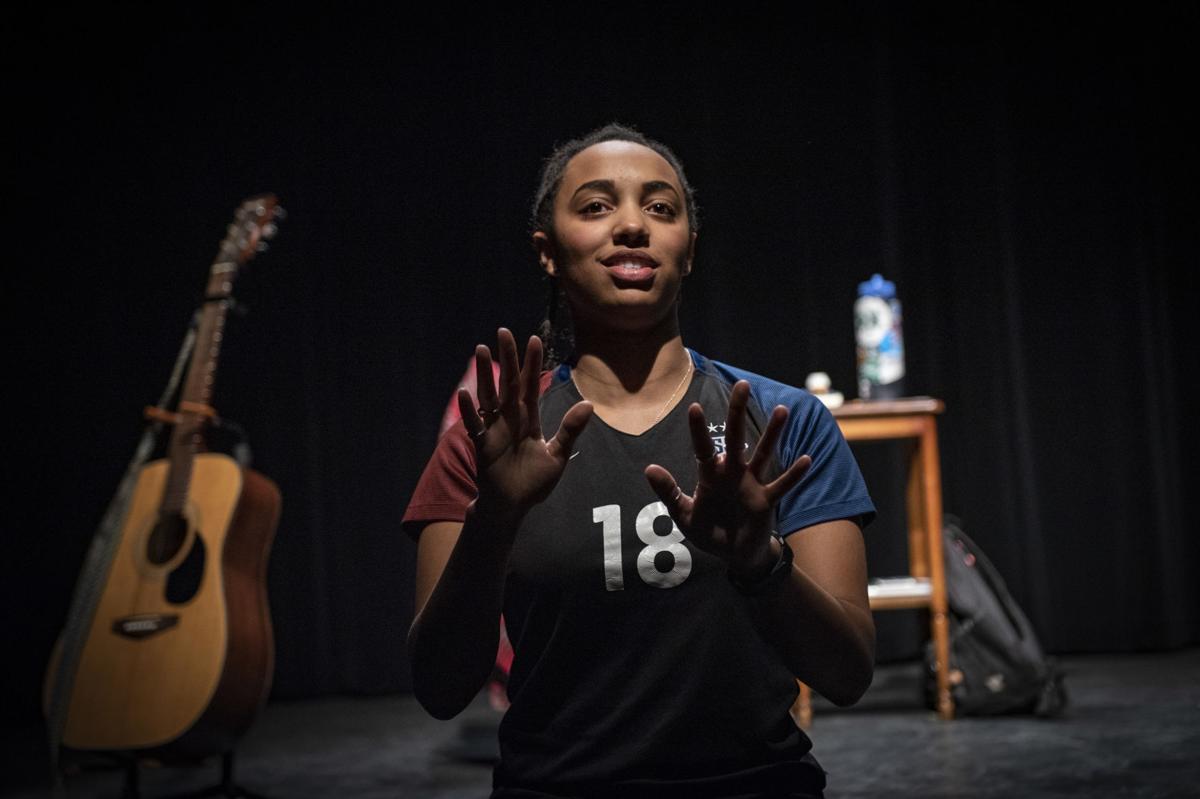 Stephanie Everett will perform her one-woman show “It’s Fine, I’m Fine,” pictured at a Dartmouth performance, Oct. 7-25 at the Barrette Center for the Arts in White River Junction live, Northern Stage’s first live in-person production since the beginning of COVID-19. The show will also be live-streamed. 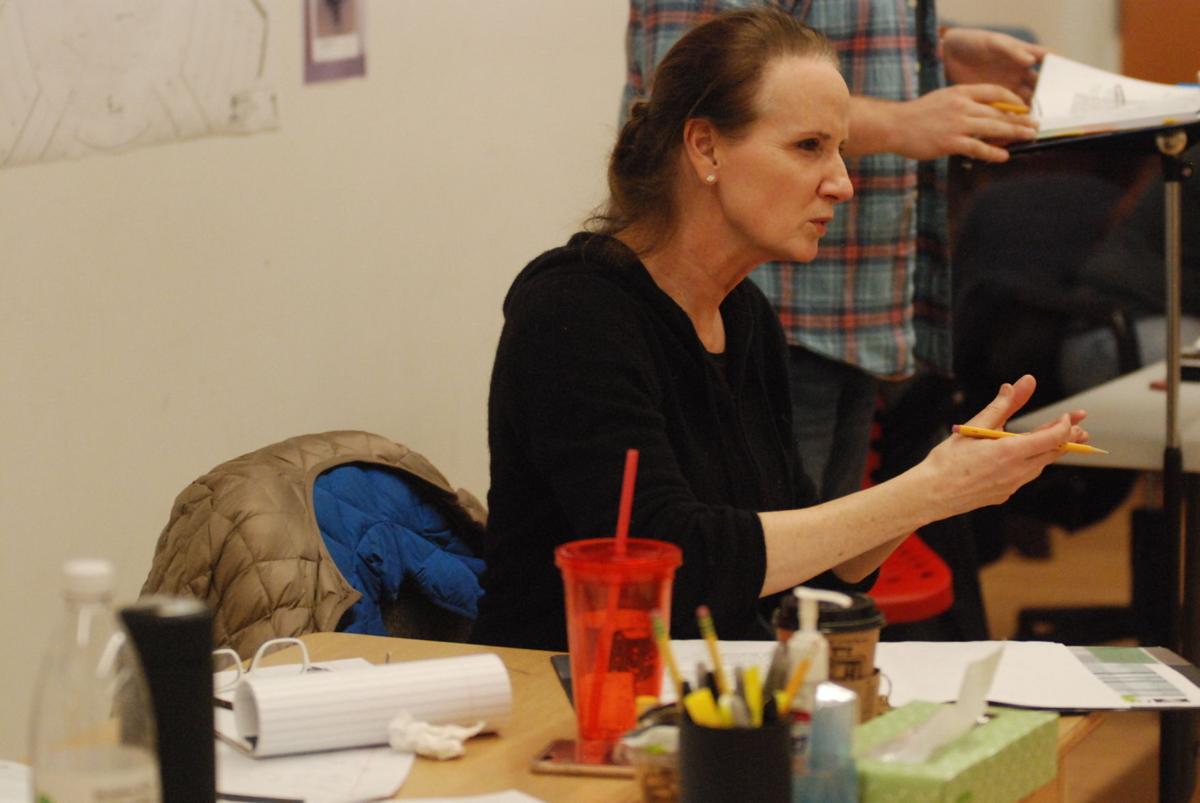 Stephanie Everett will perform her one-woman show “It’s Fine, I’m Fine,” pictured at a Dartmouth performance, Oct. 7-25 at the Barrette Center for the Arts in White River Junction live, Northern Stage’s first live in-person production since the beginning of COVID-19. The show will also be live-streamed.

When Stephanie Everett was forced off the Dartmouth soccer team by multiple concussions, the road back to health led not only to a new avocation, theater, but to her writing and starring in her first play.

“When she left the soccer team, she wound up in my musical theater class,” explained Carol Dunne, Northern Stage’s producing artistic director and a Dartmouth theater professor.

“She was singing ‘Losing My Mind’ from Sondheim’s ‘Follies,’ and I thought, ‘Wow! this student is tapping into a beautiful love affair.’ And I said, ‘Whatever you’re connecting to, whoever it is, is really strong.’ She said, ‘No, it’s soccer. ‘Because I lost soccer as a partner in my life.’”

“What makes it special,” Dunne said, “is we see somebody through incredible hardship learning an amazing lesson that’s really opened up her life — which is what we all hope for in our COVID time.”

Northern Stage’s will be the first LORT (League of Resident Theatres) production sanctioned by Actors’ Equity Association in the United States since the beginning of the COVID-19 production. (The reason that there has been virtually no theater is Actors’ Equity: The actors’ union has forbidden its members to perform until stringent safety precautions are taken.) The production also needed the approval of the Stage Directors and Choreographers Society and United Scenic Artists.

Everett wrote “It’s Fine, I’m Fine” as part of her Dartmouth Experiential Term (E-Term) at Northern Stage, a collaboration between the two Upper Valley organizations. It was workshopped in Northern Stage’s 2018 New Works Now festival, going on to win the Best Festival Debut at New York’s United Solo Festival in 2019. The play was developed with the support of the BOLD Theater Women’s Leadership Circle, a major grant to empower women in theater that is directed by Dunne.

“It’s Fine, I’m Fine” follows Everett as she comes to grips with a painful “new normal” after four concussions ended her career as a varsity soccer player at Dartmouth. Funny, heartbreaking and human, the hour-long play advocates for compassion in the face of all of our invisible struggles.

Dunne, who is directing this production, remembers when she first encouraged Everett while she was an “E-termer” to write the play.

“She had never written a play,” Dunne said. “She wrote these monologues and presented them to us — and we were all crying in the room.”

“Then our goal, because we wanted to support Steph and use the BOLD Circle, was to get it to New York, so we skipped really doing it at Northern Stage,” Dunne said, “We got her to New York. It got her best newcomer to the United Solo Festival award. We were so proud.

“It’s such a story of resilience, and it’s just one person. Audiences loved it in workshop, but never had a chance to (really) see it,” Dunne said. “What makes it work? Her incredible honesty. And the beauty that Stephanie wouldn’t be an actress if she hadn’t had these hardships.”

Like all new plays, “It’s Fine, I’m Fine” took time and fertilization to blossom into what it is today.

“We’re on draft 32,” Dunne said. “It really started as a very raw piece. We had said, ‘Steph, talk about your journey with us.’ I was very interested in what she was going through with the pain, what every day was like for her, to wake up and it’s still the same. And so a lot of the first part was focused on what can she eat, what can’t she eat. How did it happen? What was it like to sit on the sidelines?”

And then Everett brought in a guitar.

“I had no idea she wrote songs that in the first day she put into it,” Dunne said. “That makes it a play already.”

One big step is Northern Stage is creating a more sophisticated production.

“We have a little set that we’ve created — and she’s never had anything more than a chair,” Dunne said. “And then sound design. We have Jane Shaw working with her. She’s just brilliant, so I can’t wait to see what Jane makes. What is that feeling that Steph has and how does it look on sound?”

Because it’s only a one-person show, and there is an inherent lyricism to it, movement becomes very important. Choreographer Beatrice Capote, a member of the Camille A. Brown & Dancers, is assisting Everett.

“I’m enhancing her narrative through subtle movements, at the same time expanded the movement,” Capote said. “There are a lot of references. One of my favorites is to Maman. She talks about her (Senegal-born) mother and the subtleties of tradition. How can I put some African tradition into the movement and into that story?”

“So not only are we bringing in her story in terms of what she’s going through, but also some cultural movements to highlight her background,” Capote said.

“Artistically, we’ve got it,” she said. “We know how to do plays. But how do you transport an actor up here? Stephanie drove. How do you support her in her two-week quarantine? That’s the challenge. We want to keep people safe.”

And the audience will be segregated for social distancing, with all precautions being taken, which should make most comfortable. But if that’s not enough. …

“If you don’t want to come, we’ll have a beautiful streaming version of it,” Dunne said.

Northern Stage presents Stephanie Everett in her one-woman show “It’s Fine, I’m Fine” live, in-person Oct. 7-25 at the Barrette Center for the Arts, 74 Gates St. in White River Junction. All Vermont COVID-19 regulations will be observed, including masks and social distancing. Tickets (reservations required) are $45, $19 for students; call 802-296-7000, or go online to northernstage.org

Northern Stage is implementing numerous safety precautions to ensure the experience is as safe as possible for their artists and audience:

— Requiring everyone in the building to be masked at all times except for the actor when she is performing, when she will remain 16 feet away from all other people

— Limited time congregating together as “It’s Fine, I’m Fine” is 60 minutes and plays without intermission