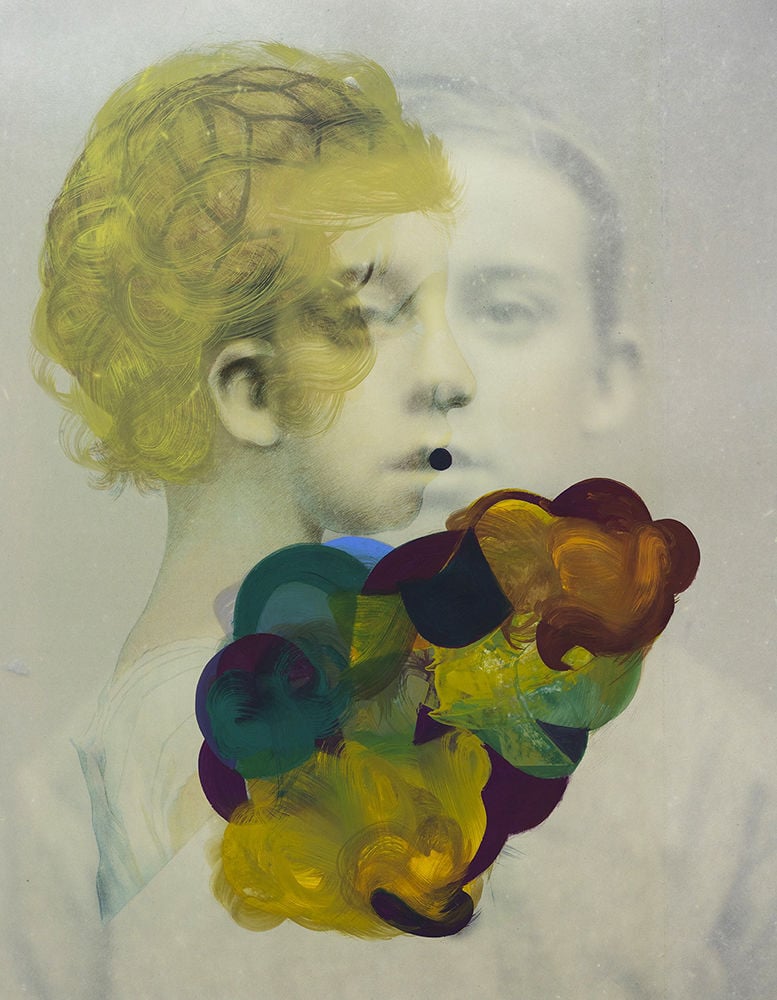 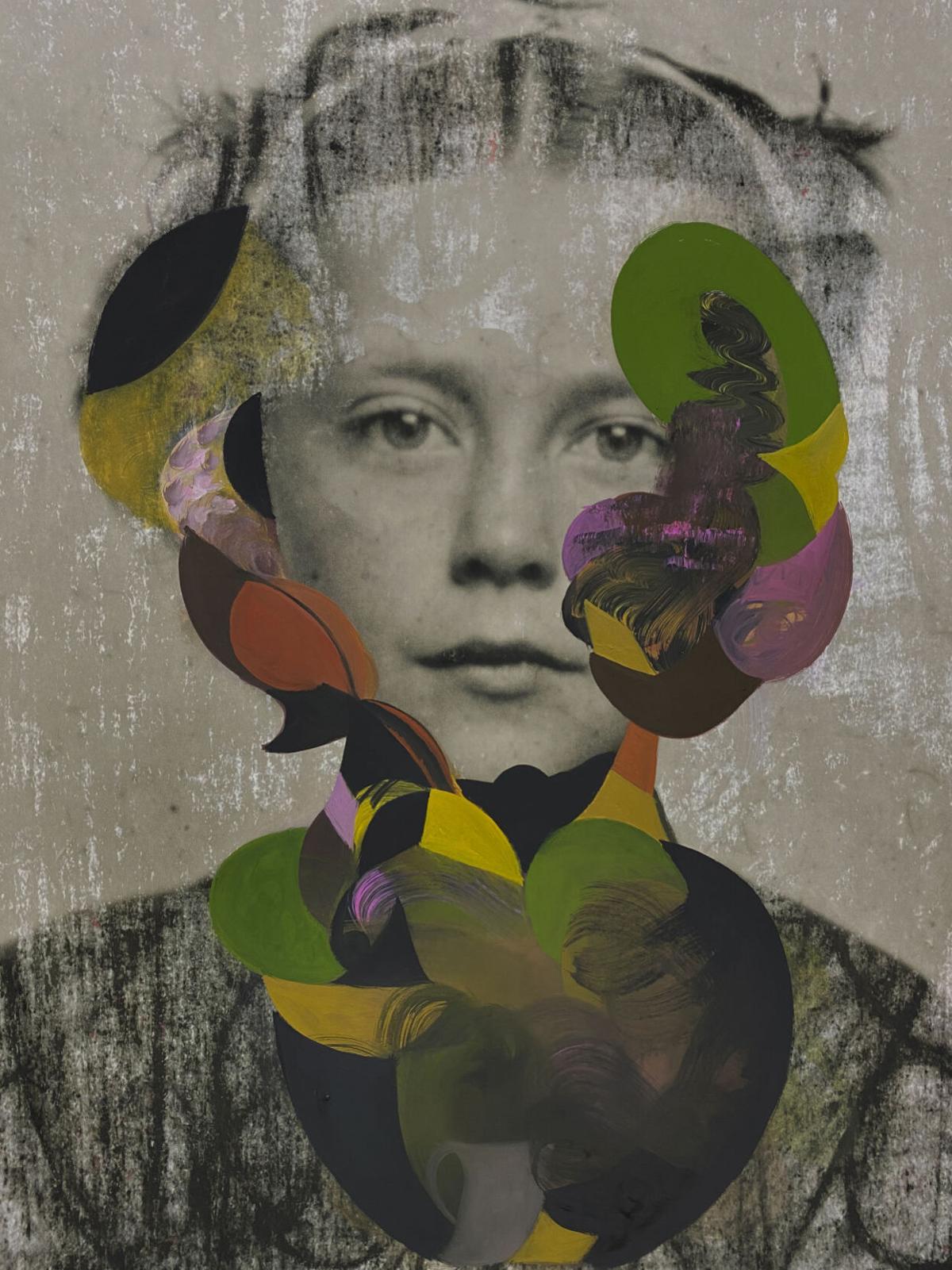 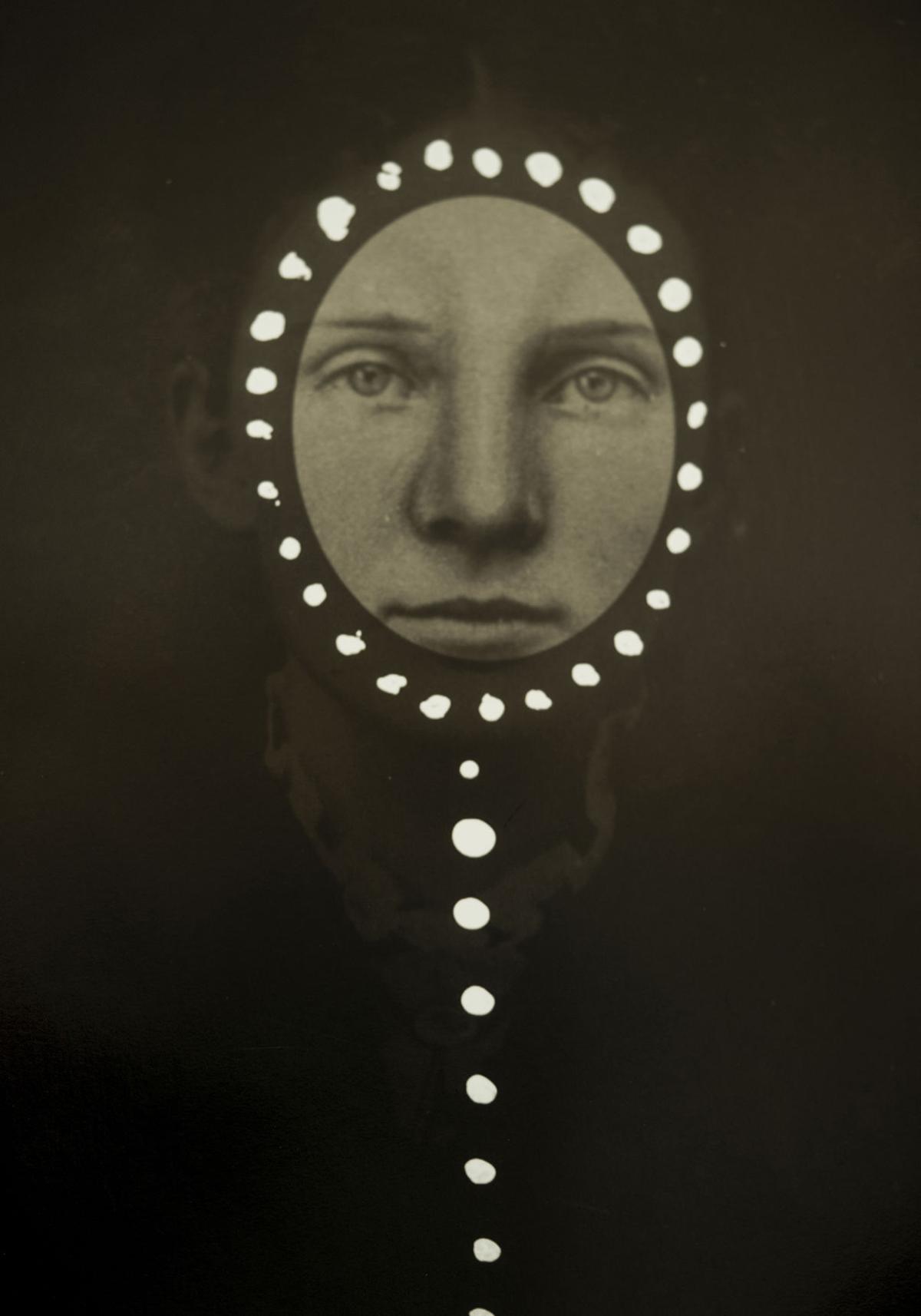 A woman with high cheekbones, her dark hair pulled back from a center part, looks straight at the viewer with a clear gaze and perhaps the tiniest hint of a smile at the corners of her mouth. A thin band of lace at the edge of her blouse emphasizes her slender neck. In a further layer over her classic 19th-century photograph, her face is symmetrically framed, as with a mantilla, with light and floating shapes, perhaps fragments of leaves or butterfly wings.

“I started collecting tintypes in the late ’70s. When I created the pieces in ‘Milking Butterflies’ I began by scanning many of those tintypes and then printing them. The printed photograph provides a field, a contemplative ground for painting and mark making. The painted photograph is essentially a duet — the two mediums, both equally important, contribute to the whole,” Cone explains in her artist’s statement.

“My interest in the translation of the tintype is by reanimating or resuscitating the portrait. I think of these portraits as time travelers,” she notes.

Tintypes, photographs made as a direct positive printed on thin sheets of metal, enjoyed huge popularity in the 1860s and ’70s. Some were created in studio settings, but the process also lent itself to portability — traveling photographers set up booths at fairs, photojournalists took them at battlefields.

“Tintype really democratized portrait making. Before that, you had to be wealthy to have a portrait and it was painted. Tintypes, on metal, are also able to weather time,” said Cone.

Part of the appeal to her of the images is their anonymity. The identity of the subjects and the photographers are lost to time, but their presence endures, and for Cone, serves a springboard to her explorations of them. She notes that with the tintype process, which requires the subject to sit still through the exposure, subjects are usually looking straight ahead directly at the photographer, engaging the viewer with their gaze.

“There’s a resonance that happens, I find something interesting in the face, usually the glance, and feel I’m connecting with that person. It’s a meditative contemplative state. Who is this person? What did they do? It all becomes part of my process,” Cone said.

Her response to that connection guides her work in painting or layering other images on the printed portraits.

Cone’s “Other Series” artworks each consider an individual portrait. In “Lionheart” a young woman looks out from a mane-like profusion that evokes lace and regal Victorian splendor. “K” evokes a sense of gender fluidity, a masculine face framed with contemporary styled blond hair.

“I wanted to do something around that, where the animal and its wisdom becomes a container. They are parts of us,” Cone explained.

Within “Animal Guides” silhouettes — a donkey, elephant, bear among them — are images from her tintype collections, sometimes in family group, not solely individuals. The artworks are layered with color, brushstrokes and abstract forms.

A friend recently commented to Cone that, “Art is the currency of hope.”

“It really stuck me,” she said. “I want people to slow down and look. And I hope people are inspired to make art.”

Highland Center for the Arts

The Highland Center for the Arts presents “Milking Butterflies,” photographs by Cathy Cone, through Sept. 6, at the Highland Center Gallery, 2875 Hardwick St. in in Greensbro. Hours (masks and distancing) 11 a.m. to 4 p.m. Wednesday-Sunday, free, by reservation only; call 802-533-9075, or go online to highlandartsvt.org