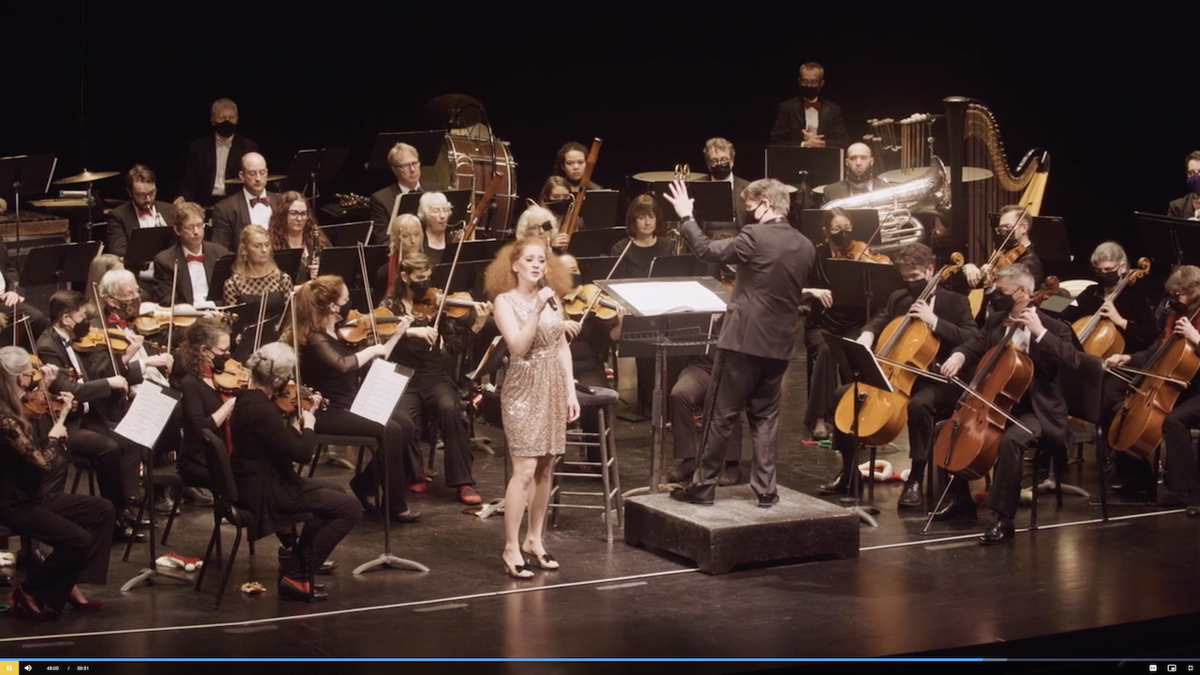 Peter Askim, with soprano Melissa Wimbish, conducts the VSO Holiday Pops Dec. 11 at The Flynn in Burlington. Askim is a candidate for VSO music director. 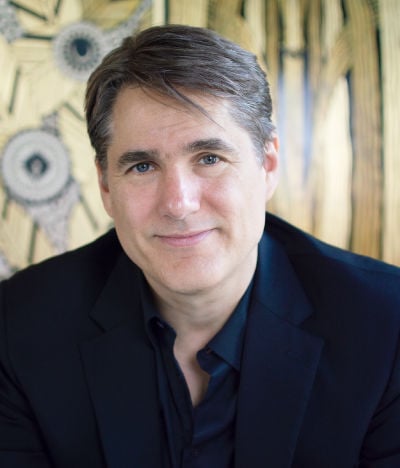 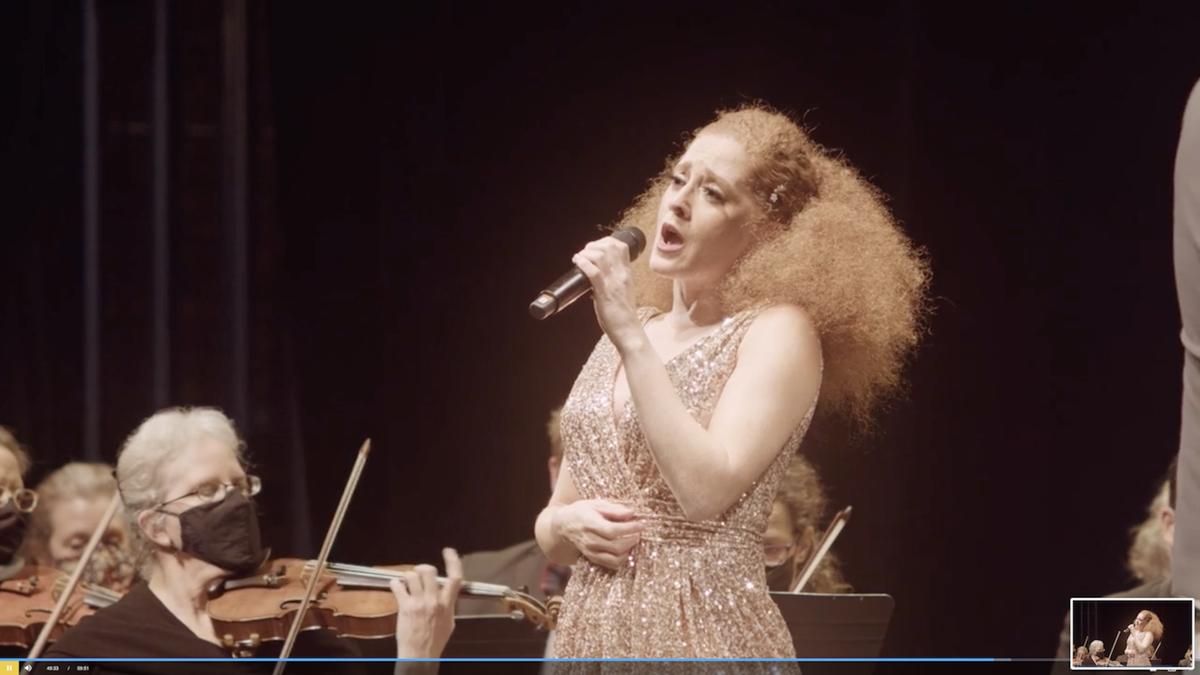 Melissa Wimbish sings “I’ll Be Home for Christmas” with the VSO Dec. 11 at The Flynn.

Peter Askim, with soprano Melissa Wimbish, conducts the VSO Holiday Pops Dec. 11 at The Flynn in Burlington. Askim is a candidate for VSO music director.

Melissa Wimbish sings “I’ll Be Home for Christmas” with the VSO Dec. 11 at The Flynn.

The charismatic Peter Askim brought a decidedly new flavor to the December Vermont Symphony Opera Holiday Pops concerts, one that was applauded enthusiastically by audiences Dec. 10 at the Barre Opera House, Dec. 11 at The Flynn in Burlington, and Dec. 12 at Rutland’s Paramount Theatre.

(As I was unavailable that weekend, I am reviewing the hour-long streamed version of the Dec. 11 concert, available for a fee through 7 p.m. Sunday. Jan. 23 at www.vso.org)

It was clear from the opening that something different was afoot. The brilliant “Rocket Sleigh” by Boston-based Delvyn Case was spicy and colorful, splashy, driving with some beautiful quiet moments, yet decidedly today. It was followed by “Umoja (Unity in Swahili),” by Valerie Coleman, flutist of the renowned Imani Winds. The charming inventive ethnic-flavored, harmonically and rhythmically charged ballad was affecting and memorable.

The concert then went decidedly traditional with four movements from “The Nutcracker.” Tchaikovsky’s music is pure Romanticism, with lavish swaths of color, dramatic rhythms and endless lyricism. And the ballet is such a joyful experience that it has remained a holiday favorite since it premiered in 1892.

Askim certainly delivered the joy of “The Nutcracker,” cleanly with precise rhythms, eschewing the dripping syrup of many holiday performances. The opening “March” was irresistible; “Arabian Dance” was sensitive, rhythmically controlled, effective.

Enjoying the delightful virtuosity of principal flutist Melissa Mielens, the “Chinese Dance” was precise and perhaps a little too rhythmic. Finally, “Trepak,” the Cossack dance, was clean, rhythmic and exciting.

Although “The Nutcracker” missed some of its rich Romanticism, Askim proved a most competent, musically sensitive and able conductor throughout the concert. He also seemed to establish an easy rapport with the orchestra, which responded enthusiastically.

Still, the most beautiful moment in the program for me was German late Romantic composer Max Reger’s “Mary’s Cradle Song.” (The delicacy will be somewhat surprising to those who know Reger.) Enjoying some very sensitive singing, Wimbish’s performance was brilliant, beautifully tender and deeply touching. Askim and the VSO accompanied with warmth and delicacy. It was gorgeous.

Wimbish introduced herself with a virtuoso operatic performance of the “Alleluia” from Mozart’s motet, Exsultate, jubilate, K. 165. Wimbish not only had brilliance, but a richness as well. Askim and the VSO played with Mozart elegance.

If that weren’t enough, Wimbish was totally at home — though a bit operatic —in big band music, a charismatic “I’ll Be Home for Christmas” by Walter Kent (arr. Gold). (A different side of Wimbish, came out the following weekend when she sang contemporary classical at the Yellow Barn Festival in Putney.)

Delightful grandiosity, Askim mined out every beautiful detail and the result was true holiday joy.

The VSO was in fine form. Despite only two rehearsals (plus the Barre performance), the orchestra was “on.” Members were clearly sharing the music with the conductor and audience. They were precise and sensitive, and sounded great.

A pops program — and this was Askim’s first ever — with no major symphonic works wasn’t ideal to judge a conductor. (In 20 years as music director, Jamie Laredo never conducted a pops concert.) But Askim’s programming was revealing: His choices were novel and quality — no cheap schlock.

On the podium, Askim was serious, assertive and direct. Performances were straightforward, yet sensitive and nuanced, delivering the essence of each work. And he has plenty of onstage charisma

Askim is not only a conductor but a composer and bassist. He is the conductor of the Raleigh Civic Symphony and Chamber Orchestra, as well as director of orchestral activities at North Carolina State University. He is also the founder and artistic director of The Next Festival of Emerging Artists in Falls, Village, Connecticut.

Laredo stepped down as music director last season. The first candidate, Akiko Fujimoto, conducted the VSO season opener Oct. 30, 2021, at The Flynn, and the third finalist Tania Miller, will lead the March 26 Classical Series at The Flynn.

The 2021 Vermont Symphony Orchestra Holiday Pops Dec. 11 performance at The Flynn in Burlington is available for streaming (in an hour-long version) online through 7 p.m. Sunday. Jan. 23. Single tickets start at $10, on a pay-what-you-can basis; go online to www.vso.org/event/holiday-pops-digital-format/ For information about other VSO programing, visit www.vso.org