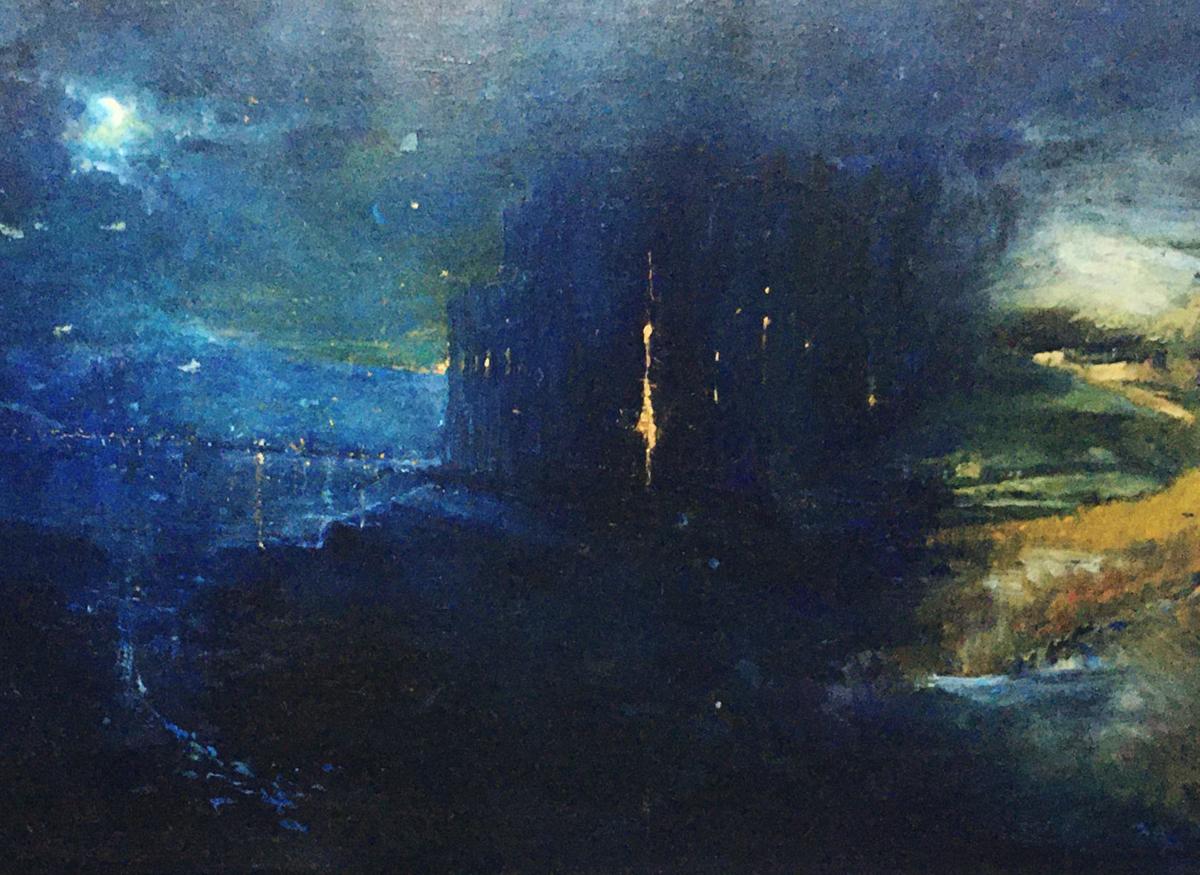 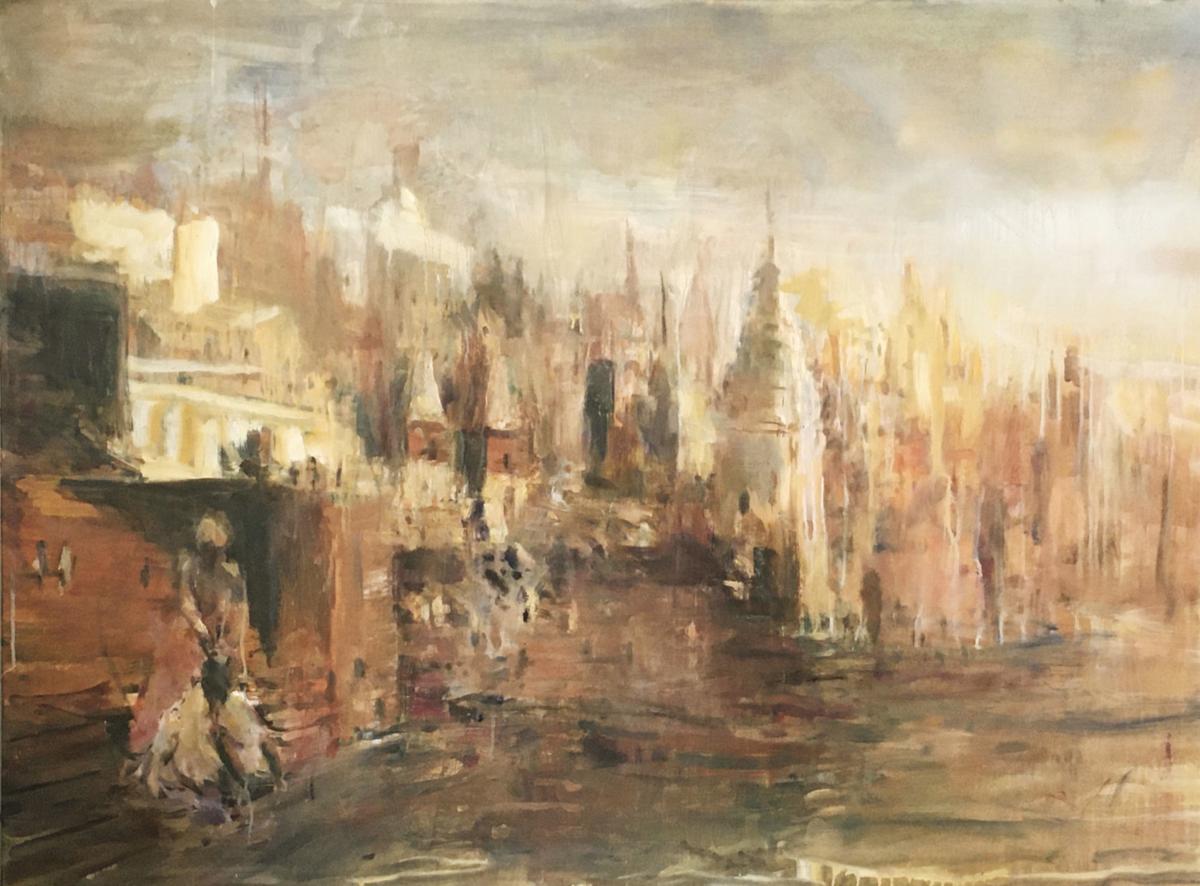 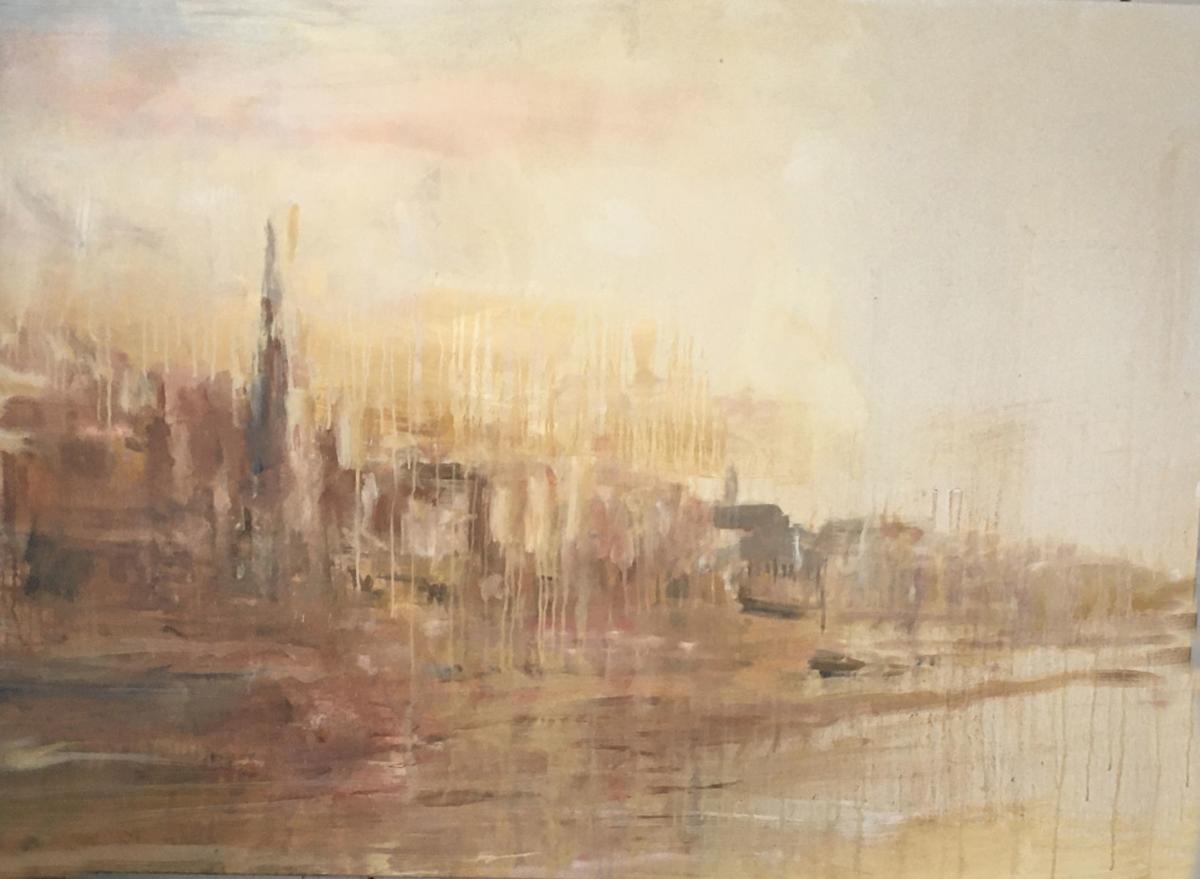 Benares, one of India’s holiest cities of Hindu religion, stretches along the Ganges River. Densely packed centuries-old sandstone buildings climb its slope, minarets and domes of temples shaping its skyline. Scores of ghats, broad staircases, give access to the water for ceremony, bathing and cremation.

Osvaldo “Nitya” Brighenti’s pair of paintings, “Benares 1” and “Benares 2,” evoke this sacred place — its timelessness, its elemental connection with water, its humanity and rituals. Brighenti’s “Benares” diptych is among the paintings in his solo exhibition “Of Cities and Deserts,” opening at the Vermont Supreme Court Gallery this week. The exhibition features oil paintings and watercolors including nomadic landscapes, still lifes and portraiture. “Of Cities and Deserts” continues through March 30.

“Nitya’s paintings move us to take a deeper look into how our existence is influenced by our various environments. This show is not just painting — the works address the deepest sense of our own humanity. Brighenti will take you on a spiritual journey,” said Vermont State Curator David Schutz.

Architect and poet, as well as painter, Brighenti now lives in Barre but has lived and worked around the world. His global perspective and his deep connection to poets including Rimbaud are among the layers of inspiration in his artwork.

Brighenti studied and began his architecture career in his natal Italy. He traveled extensively, including overland from Europe through Turkey and Afghanistan to India in the 1970s. Moving to the United States in the 1980s, he first lived and worked in New York and New Jersey, then went on to 15 years in Hawaii before turning to Vermont three years ago.

“I was born in a small village in Italy. Because of starting small, I was drawn to bigger cities,” he said, noting his urban years. “In Vermont, I have found the middle ground, similar to the countryside where I was born.”

Beyond his architecture career, painting and poetry have long been central to Brighenti’s life.

“Painting was always my main focus, architecture was a job. I had my passion for it, but painting went on, no matter where and when, sometimes faster, sometimes slower, but there was always dialogue with images and telling a story,” Brighenti said.

“Of Cites and Deserts” draws from places and experience across decades — Genoa, Honolulu, Kathmandu and Montpelier among them.

“The title reflects the extreme duality of two ways of living,” Brighenti said. “Thinking of cities, cities are dedicated to commerce and work, capitalistic concentration of shops and life. The desert is absence of that.”

Brighenti’s “Benares” pair has its origin in his first visit there.

On arriving in Benares, after their overland travels, “We had transcendental visions on the Manikarnika Ghat. Fifty years ago, this world disappeared for three nights there; in the smoke of the burning bodies, we were carried away to a different reality. Every night I painted a miniature watercolor, completely devoid of ambitions and worries — yet completely developed — which presaged all the subsequent painting to come, over the years,” Brighenti says in his artist’s statement.

Two of Brighenti’s paintings considering the desert also have roots on that journey, from time traversing Afghanistan.

“‘Desert’ is not just a stretch of sand, rather a suspension of the dominant culture; it can also be a remote woody area difficult to reach like Huautla de Jiminez, where the Spaniards couldn’t penetrate and the Mazatec maintained their culture …” he noted in his artist’s statement.

Brighenti also asks, “Can you see why at times we need the ‘desert?’”