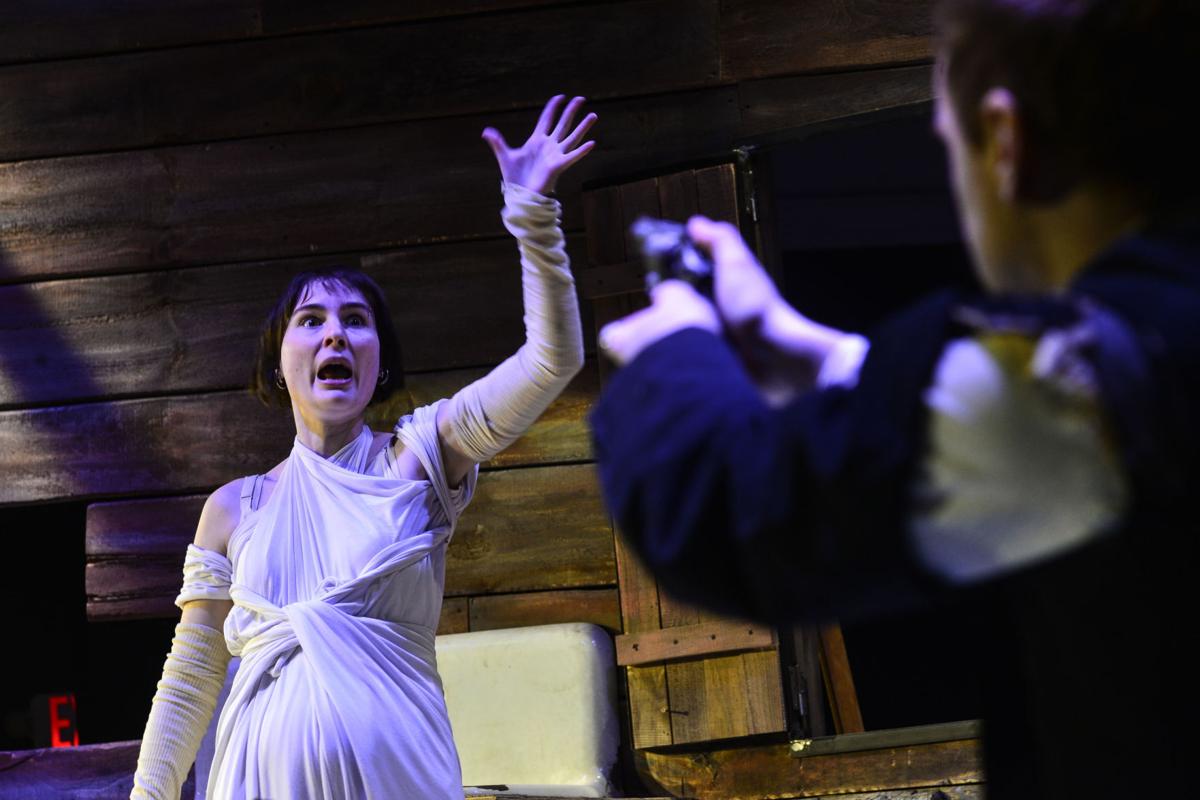 Where did the gun come from? Bronwyn (Eliza Klein) and Estevez (Colin Hinckley) are the newlyweds in the premiere of Sean Hurley’s “Food & Shelter” Jan. 21-30 at Next Stage Arts in Putney. 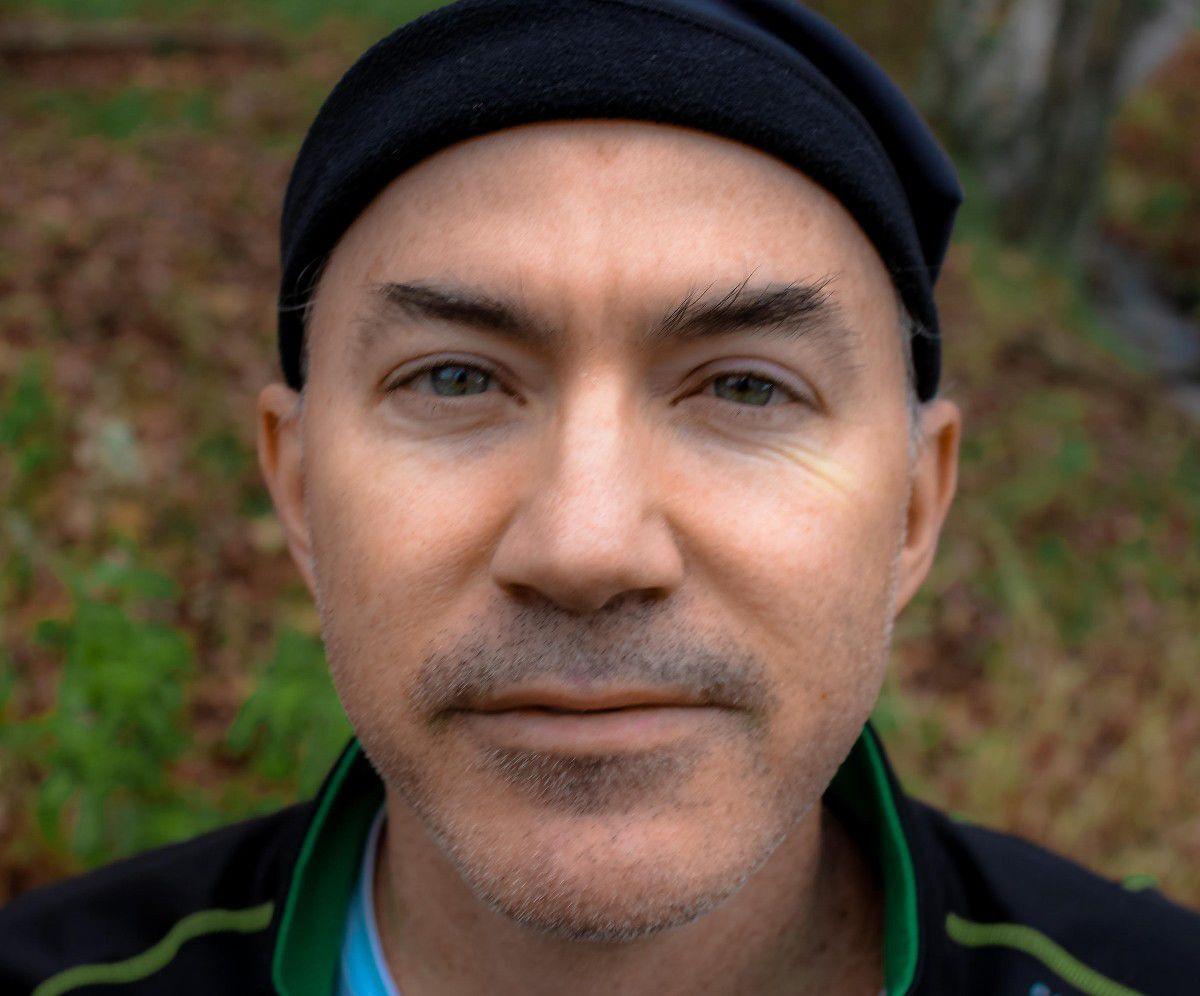 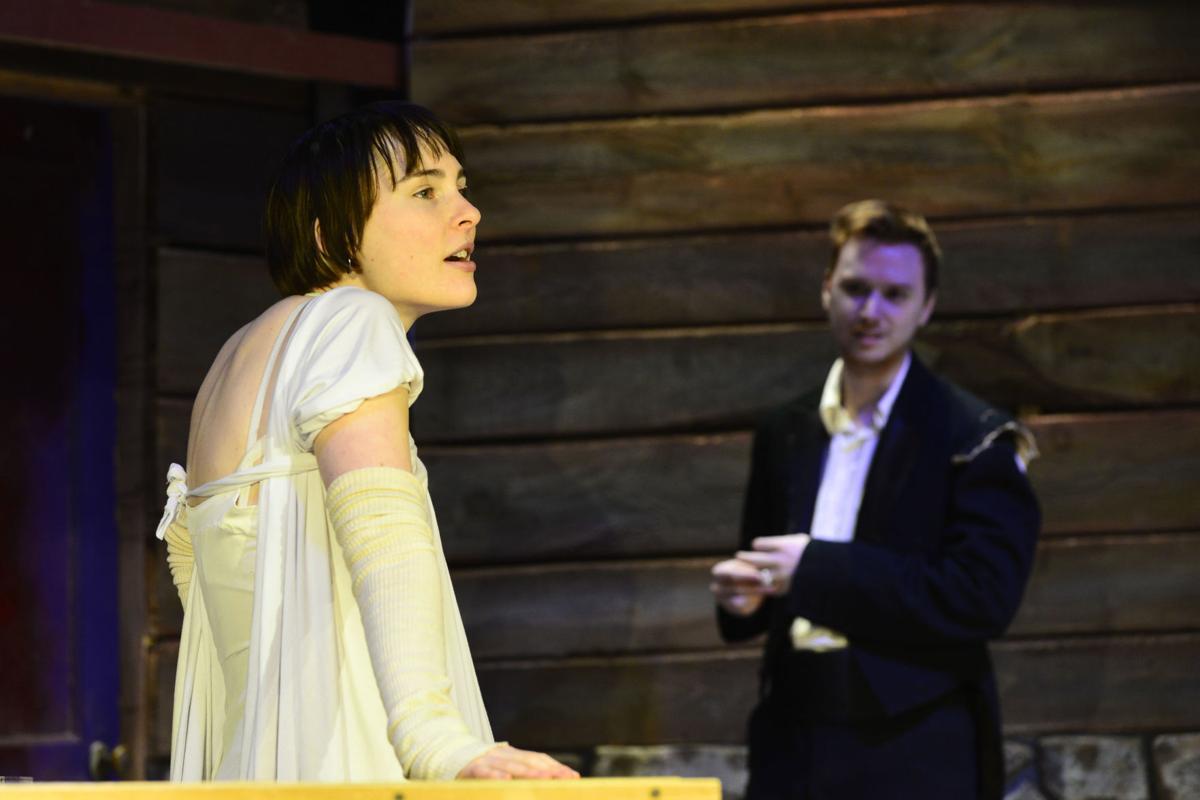 Bronwyn (Eliza Klein) is pregnant by the brother of her new husband Estevez (Colin Hinckley). 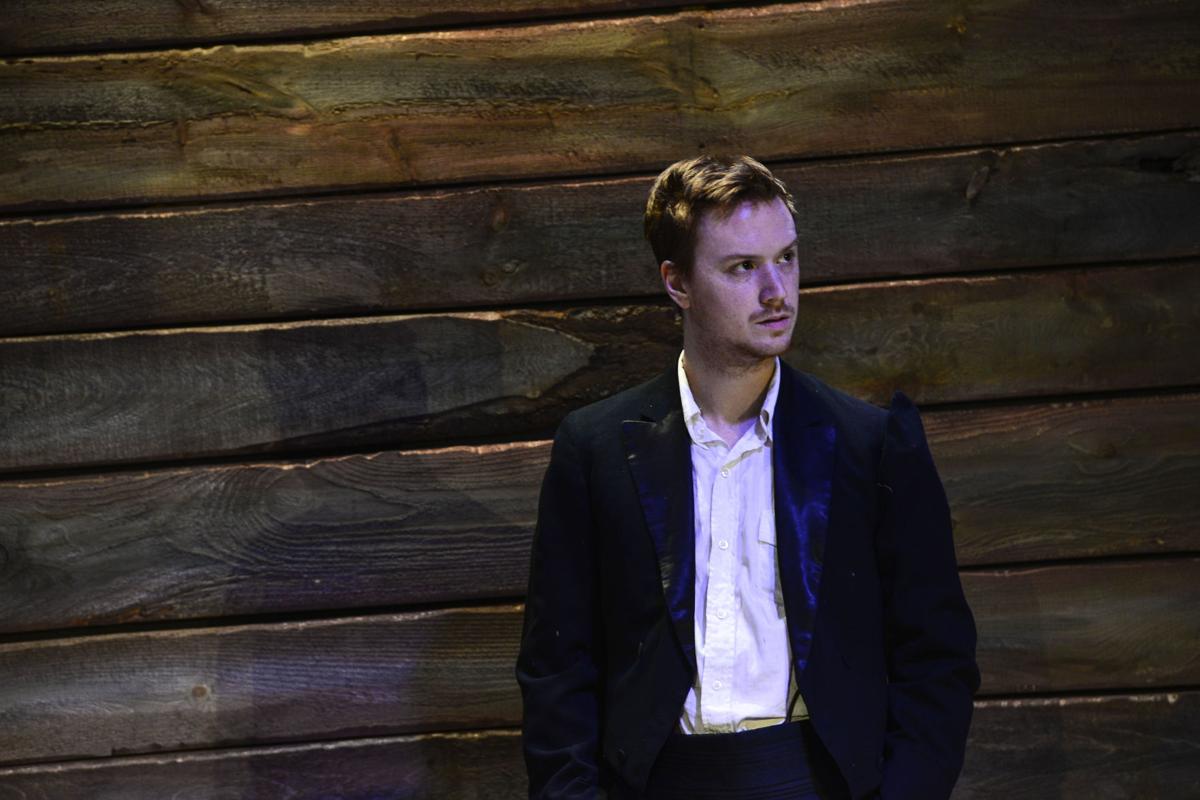 Estevez (Colin Hinckley) might have killed their honeymoon cabin’s prior owner. 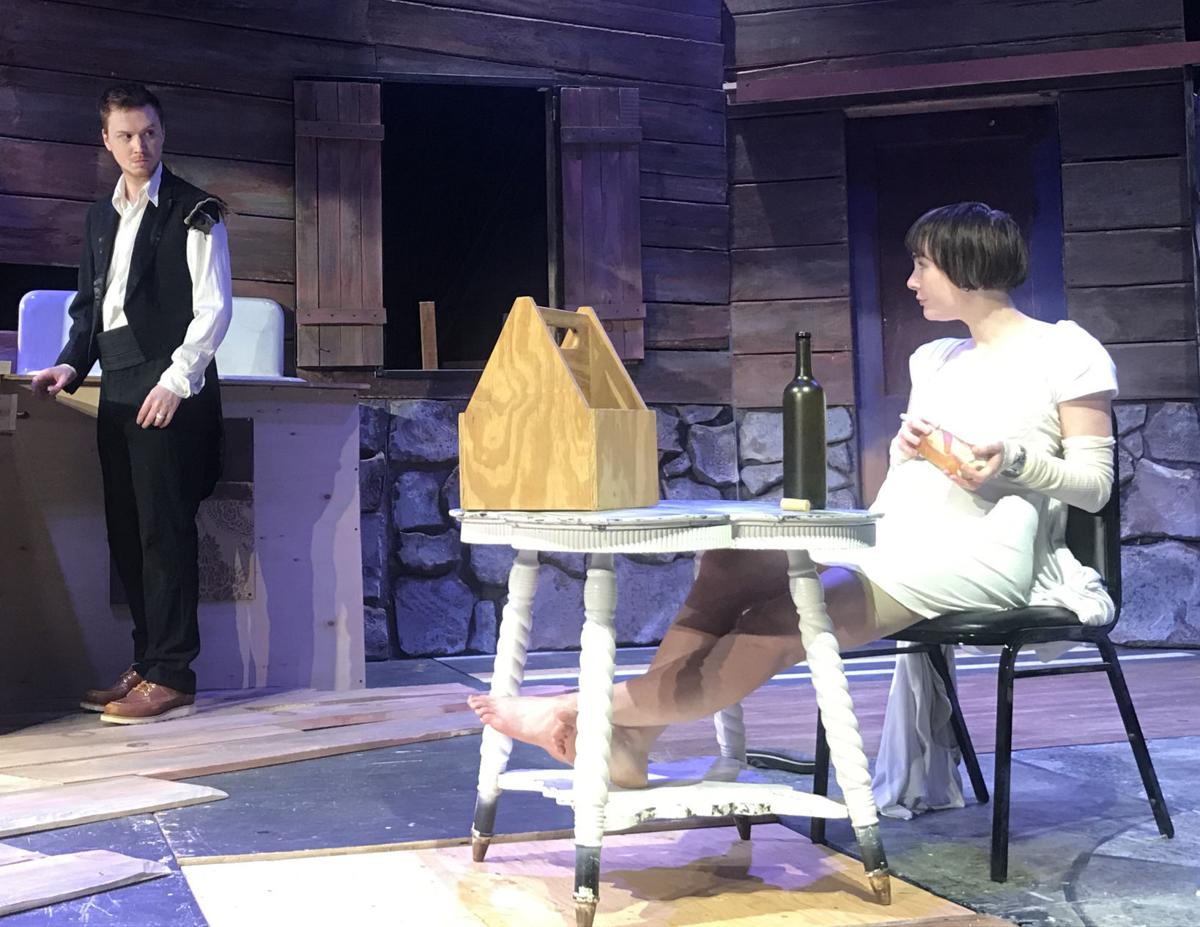 A newly married couple, Estevez (Colin Hinckley) and Bronwyn (Eliza Klein) find themselves in a cabin in the snowy woods with “more secrets than a Chinese puzzle box.”

Where did the gun come from? Bronwyn (Eliza Klein) and Estevez (Colin Hinckley) are the newlyweds in the premiere of Sean Hurley’s “Food & Shelter” Jan. 21-30 at Next Stage Arts in Putney.

Bronwyn (Eliza Klein) is pregnant by the brother of her new husband Estevez (Colin Hinckley).

Estevez (Colin Hinckley) might have killed their honeymoon cabin’s prior owner.

A newly married couple, Estevez (Colin Hinckley) and Bronwyn (Eliza Klein) find themselves in a cabin in the snowy woods with “more secrets than a Chinese puzzle box.”

The playwright describes “Food & Shelter” as “Hansel and Gretel” meets “Waiting for Godot,” a darkly moving fairy tale about love.

“When I first read it, Sean (Hurley) said to me he doesn’t expect people to walk out understanding everything,” explained David Stern, founder and artistic director of the Wild Goose Players

“He does expect them to walk out feeling something substantial — and I think that’s accurate.”

Wild Goose Players, a new professional theater company, will present the premiere of Hurley’s “Food & Shelter Jan. 21-30 at Next Stage Arts in Putney. Performances are at 7:30 p.m. Fridays-Sundays.

“This is going to sound a little hyperbolic, but I’ve been doing this for 40 years, and it’s the best original script I’ve ever seen,” Stern said. “I feel honored that he brought it to me, so I’m thrilled to be doing it.”

In addition to the Wild Goose Players, Stern is artistic director of Main Street Arts in Saxtons River. He is also a freelance stage designer and has worked for the likes of Weston Playhouse. For “Food & Shelter,” Stern is directing and designing.

When “Food & Shelter” opens, Estevez (Colin Hinckley) and Bronwyn (Eliza Klein) find themselves in a cabin in the snowy woods with more secrets than a Chinese puzzle box. A newly married couple, they have secrets of their own: She is pregnant with someone else’s baby, and he might have killed the cabin’s prior owner.

And though the cabin provides the newlyweds with food and shelter, it seems that someone, or something, is determined to never let them leave. This is a ghost story for those who sometimes wonder if they themselves might be the ghosts.

“I think it’s a real love story where two people who know what it is to suffer come to put down their defenses and see each other,” Stern said. “You just ride the experience. I have sat and I have teared up already, and I have laughed and laughed, and I just know the play works. I haven’t felt a desire to change a hair on its head”

And it’s funny. “As the performance has been coming alive, it’s been hysterical,” Stern said. “It’s a very funny read — while ending with a lot of pathos.”

“While I respect (playwright Samuel) Beckett, I find this piece of Sean’s fairly Beckett-esque, except I find the characters much more compelling individually,” Stern said. “Sean has that sort of magical realism, that departure from realistic events. I just couldn’t not do it. My guess is, we’ll do it again, somewhere, sometime.”

“Because the text is as rich as it is, we used every second of Zoom rehearsal in a really productive exploratory way,” Stern said. “Now, we’re doing six weeks of fairly intensive rehearsal. And that breadth of spending time with the material I certainly hope is paying some dividends.”

Still, for Stern, the biggest challenges are technical.

Part of the challenge is Next Stage.

“It’s got a nice raked house that ends with a platform on the floor, with a 15-foot ceiling; there are no wings; there’s no masking,” Stern said. “Somehow I’ve got to fly somebody into the stratosphere, and drop somebody into the frogs and mud, with a total of 15 feet from hard floor to hard ceiling. And the sight lines are impossible.

“I’m not going to tell you all my solutions,” Stern said with laugh.

The LOOM Dance Ensemble is joining the production to represent the nonspeaking third character.

“I have decided the role of Frank Hill can be expanded,” Stern said. “We have multiple Frank Hills, and that has been instrumental in helping us solve problems. The simpler I can make a solution, the happier I am.”

The sound designer is Greg Wilder.

“He is really a world-class composer and sound designer. His specialty is sound manipulation in space,” Stern said. “I feel very blessed about the people involved in the production, and we’re doing our best to make something magic.”

Stern met Hurley when the NHPR reporter was writing a story about Main Street Arts’ 2015 tour of “Jacques Brel Is Alive and Well and Living in Paris.”

“We spent significant time together,” Stern said. “At the end, we stayed in contact. He went to some shows that I did, we walked in the woods, and we got to know each other.

“One day, he walked in and said, ‘I wrote this play, I want you to do it,’” Stern said. “Tellingly, Sean says that that he doesn’t write to say something, he writes to discover something. That’s not glib.”

Wild Goose Players present the premiere of “Food & Shelter,” a play by Sean Hurley, Jan. 21-30 at Next Stage Arts, 15 Kimball Hill in Putney. Performances are at 7:30 p.m. Fridays-Sundays. Tickets are $40, $35 in advance; call 802-387-0102, or go online to nextstagearts.org/event/food-shelter/ Proof of vaccination or negative test within 48 hours, and masks are required.