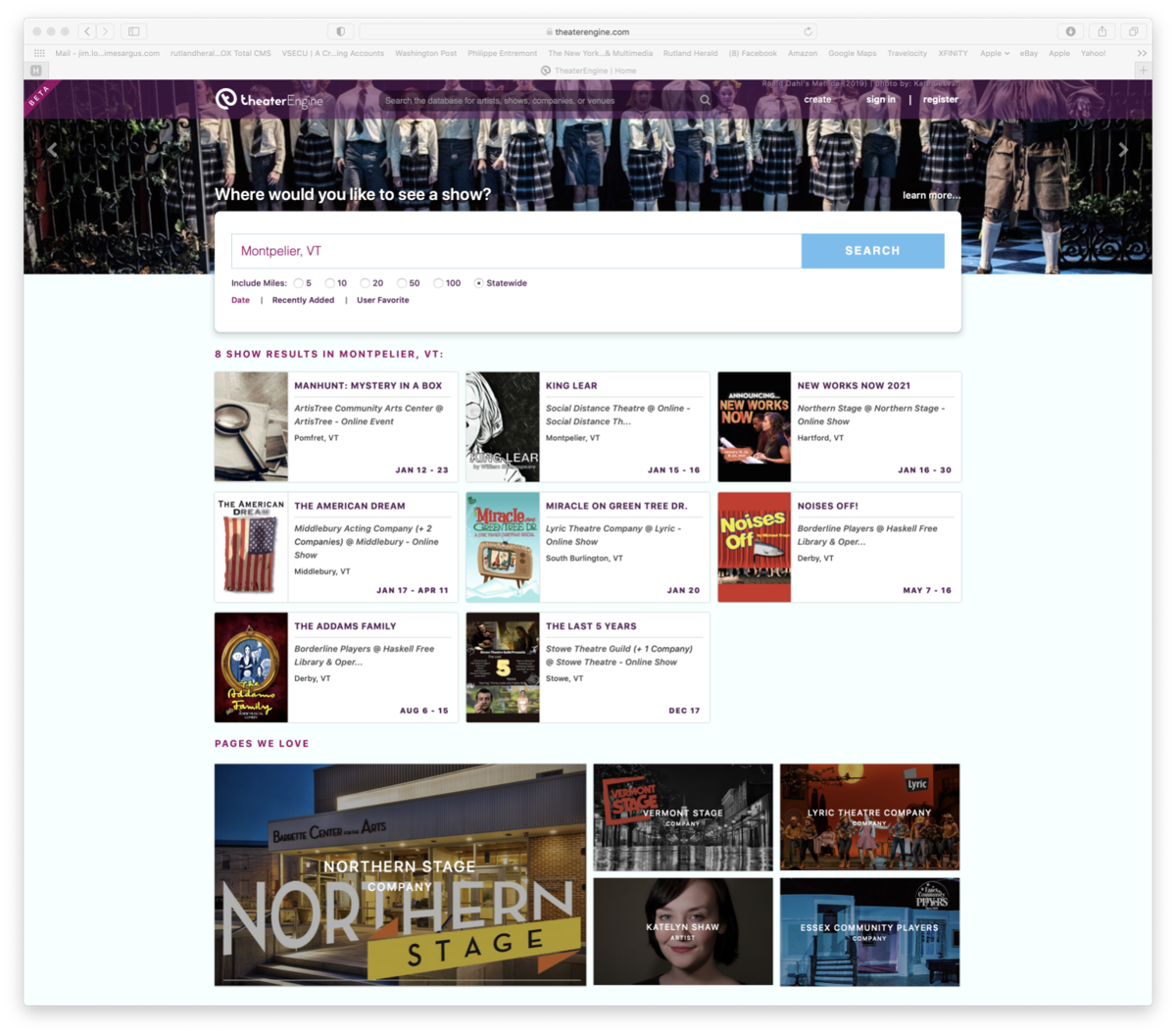 TheaterEngine is a Vermont-based multifunctional online social networking platform for the performing arts industry and its audiences. 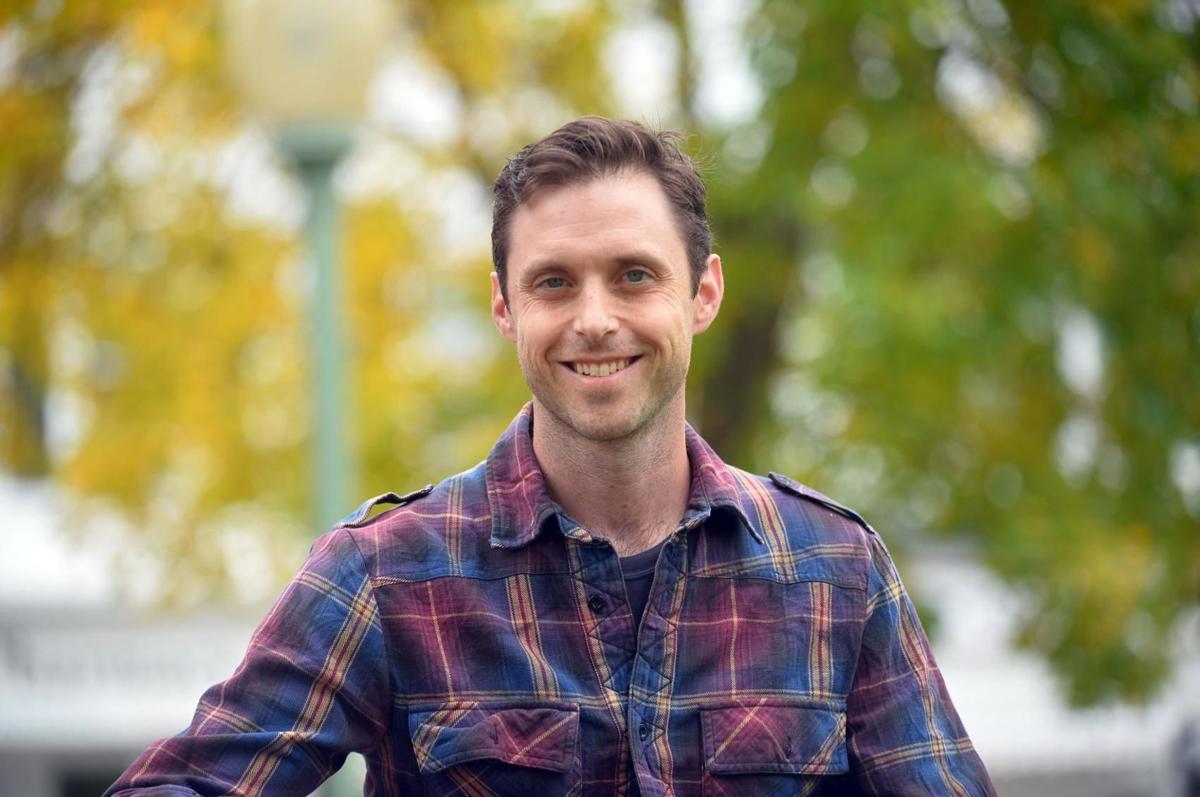 Dominic Spillane, theater marketing professional and actor, is building TheaterEngine as an online platform, based on social media technology, as a guide to live theater. 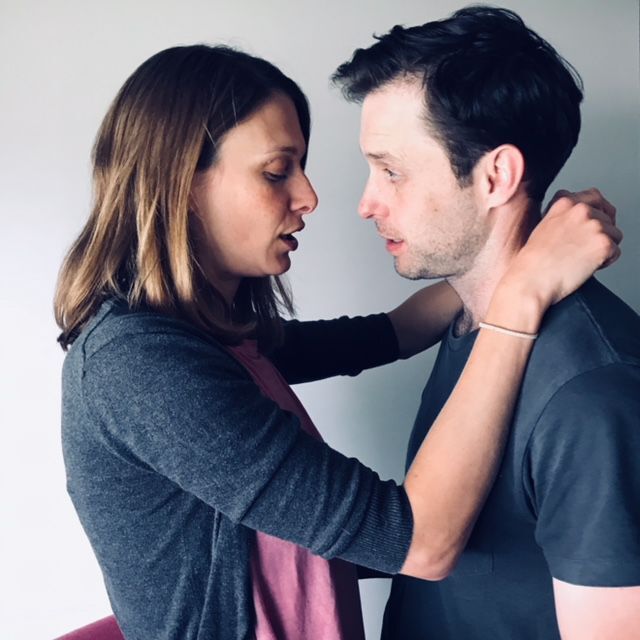 Maren Langdon Spillane and Dominic Spillane in Nick Payne’s “Constellations,” directed by Joanne Greenberg, in Warren and Montpelier in 2018.

TheaterEngine is a Vermont-based multifunctional online social networking platform for the performing arts industry and its audiences.

Dominic Spillane, theater marketing professional and actor, is building TheaterEngine as an online platform, based on social media technology, as a guide to live theater.

Maren Langdon Spillane and Dominic Spillane in Nick Payne’s “Constellations,” directed by Joanne Greenberg, in Warren and Montpelier in 2018.

Dominic Spillane is a theater marketing professional and an actor. When he moved to Vermont a few years ago, he was dismayed to find the seeming disarray of Vermont’s theater world — and he wasn’t talking about quality of performance.

“Theater is like a lot of mom-and-pop industries where you have a lot of individual artists and individual organizations who are all reinventing the wheel — one at a time in their own little world,” he said.

So he decided to something about it. The result was www.theaterengine.com, a website-in-progress, a theater (and eventually performing arts) directory. Currently the multi-faceted site offers a showcase of shows in a given area or statewide. There are theater companies and individual actors shown. Click on the desired item and you are referred to more information on the subject.

And Spillane is planning much more.

Spillane moved with his wife, actress Maren Langdon Spillane, to Northfield to raise their family. Langdon Spillane grew up in the area and was a theater student of Joanne Greenberg, now a freelance director, at U-32 High School. Since moving to Vermont, the couple has performed in shows produced and directed by Greenberg, as well as other theaters, including Lost Nation in Montpelier and Middlebury Acting Company.

“The biggest reason I started developing TheaterEngine is when I found myself doing audience development, I realized how neglected a piece of the theater-going eco-system it is,” Spillane said. “The idea behind TheaterEngine is to help build the theater audience.

“I would extend that to say, in Vermont, I came to realize how universal an issue it is for pretty much all performing arts, not just theater,” Spillane said.

There are world-class theater artists, as well as amateurs, actors and directors, that commit long hours for a substantial time to make a show the best it can be.

“We rehearse a show for a couple months, but we don’t start advertising the show until two weeks before the performances — there are only three performances anyway,” Spillane said. “So how are people supposed to see that show?”

Spillane said he has come to believe you have to be an educated consumer to competently be a consumer of theater and performing arts.

Calendars abound — newspaper and online — but vary greatly, and are often undependable.

“There are so many details that may or may not turn me into a ticket buyer,” Spillane said. “You just have to be educated to navigate those waters well. I think for the majority of people, there’s a small focus group of theater-goers who kind of lead the way and the rest of the population waits for someone else to tells them they need to go see something — or they know someone who’s in it.”

The idea of TheaterEngine is to be a performing arts aggregator, or source.

“The idea is, we’re trying to (bring to the) surface more of that relevant information that might turn you into a ticket buyer,” Spillane said.

Spillane and his collaborators continue to build the site.

“We’re about to do a really big rollout, which finally delivers a lot on the promises that were part of our original conception,” he said. “But right now we’re really just a listing site, kind of a fandango to see what’s going on around.”

Coming soon is a pathway behind the listings of plays, companies and theater artists, that will provide much more in-depth information.

“We all know what a risk it is to go see a piece of theater,” Spillane said. “Sometimes it’s great and sometimes it’s not great. I’ve found a lot of theater-going audiences develop a loyal relationship to one or two theaters and stick to them.”

“With this you will be able to follow an individual artist,” Spillane said. “I started my career as an actor, and it was always frustrating. I’m working hard, I’m doing shows, people are seeing those shows, but I have absolutely no connection to my audience. So when I do another show, how do I let those people who saw me before see me again?

“We’re building a platform that boils it down to the individual theater-makers so the audience has more things to grab on to,” he said. “Hopefully that builds the audience more.”

Jim Lowe is theater critic and arts editor of The Barre-Montpelier Times Argus and Rutland Herald, and can be reached at jim.lowe@rutlandherald.com or jim.lowe@timesarus.com.

For information about, or to become part of TheaterEngine, go online to www.theaterengine.com