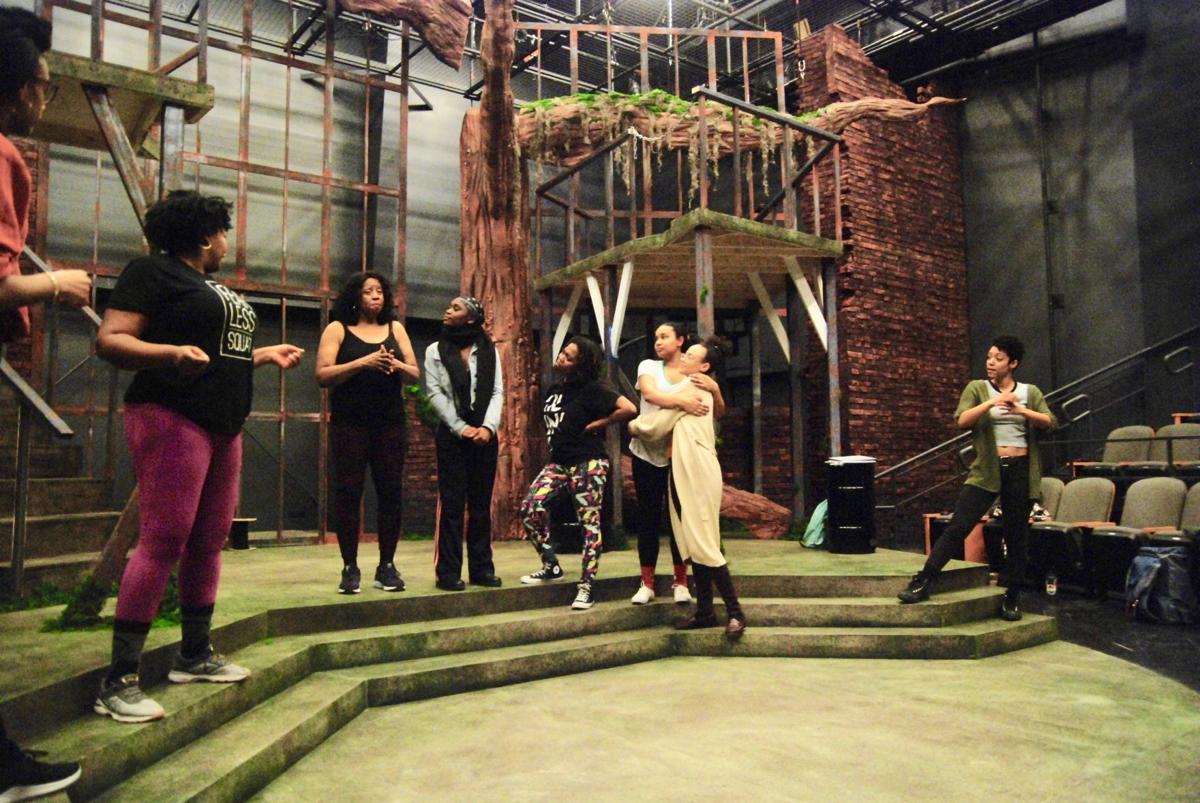 Rehearsal photo of Northern Stage’s world premiere production of Celeste Jennings’ “Citrus,” exploring the experience of being an African-American woman. The scenic designer is MeJah Balams. 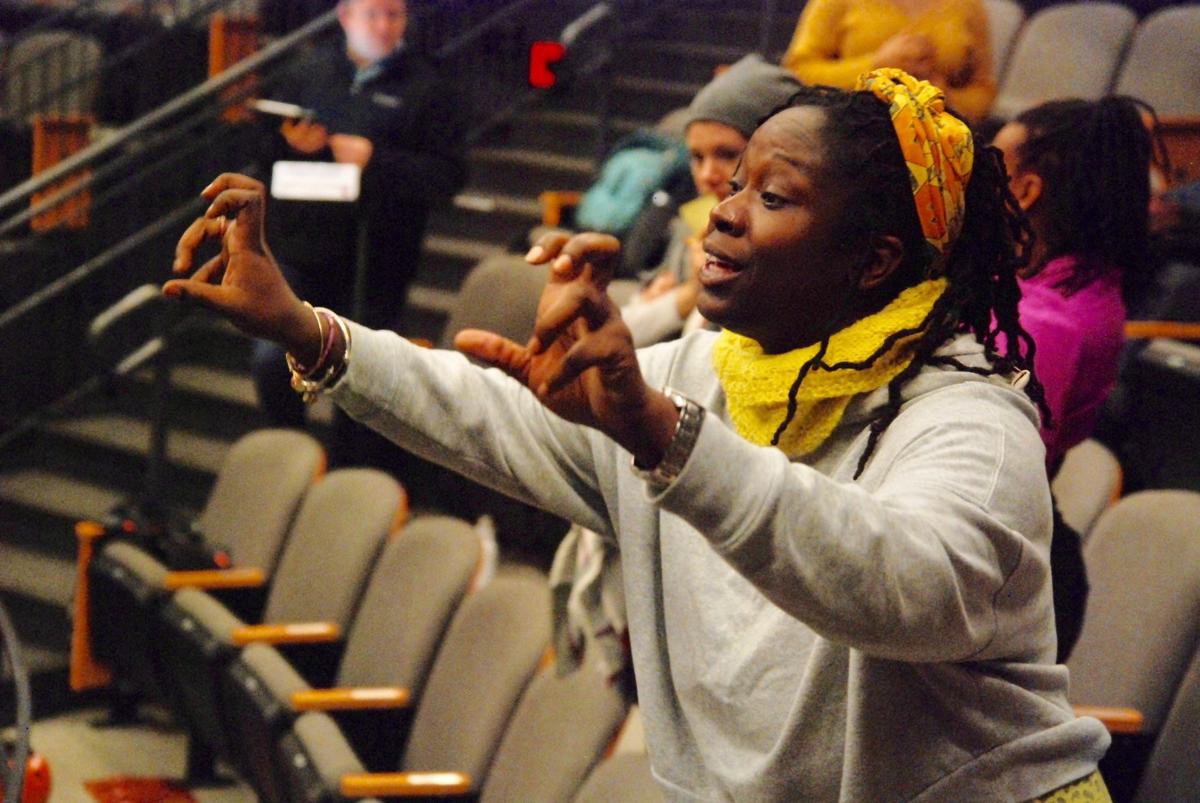 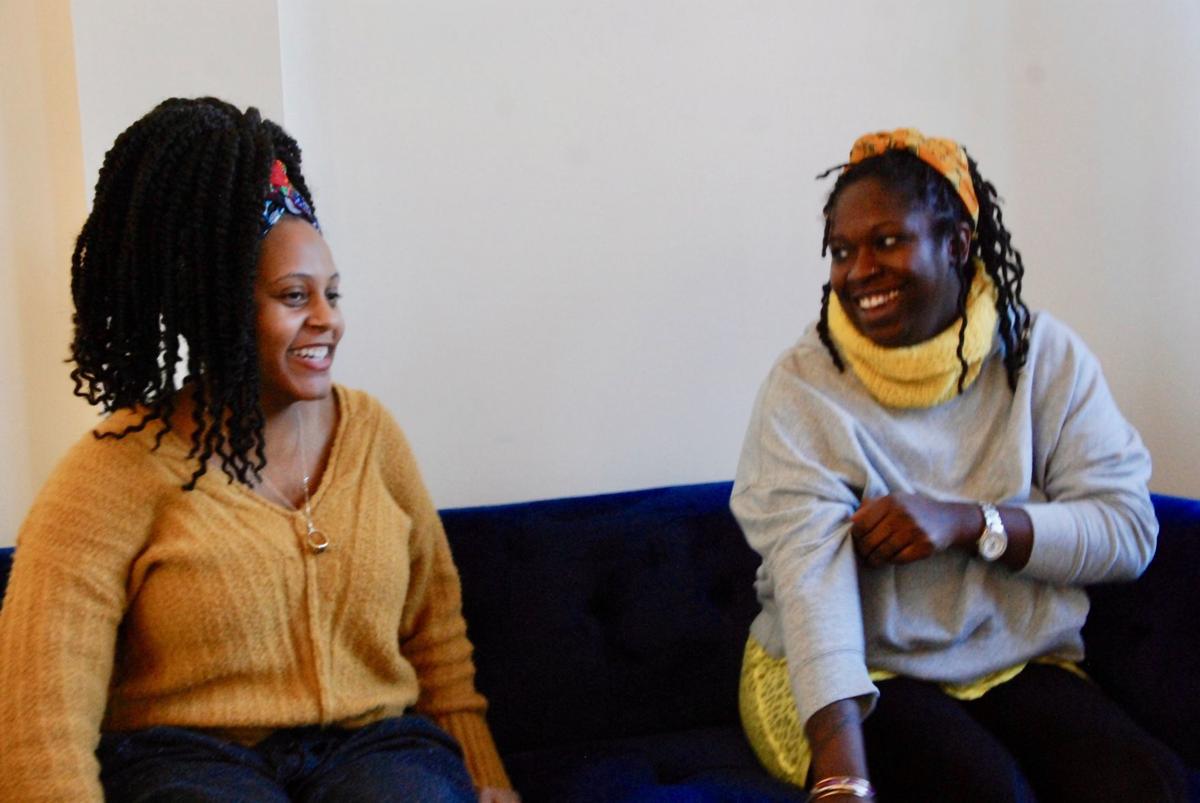 Rehearsal photo of Northern Stage’s world premiere production of Celeste Jennings’ “Citrus,” exploring the experience of being an African-American woman. The scenic designer is MeJah Balams.

When veteran theater director JaMeeka Holloway-Burrell first saw the script of a new play by Dartmouth College student Celeste Jennings exploring the experiences of African-American women, she was stunned.

“This play is fire,” Holloway-Burrell said. “I just felt really set ablaze by the material, specifically the prologue when she says, ‘Remember when you were born? When your knees rasp against hard floors and you bend your brain backward to focus on God? Do you ever think of what your breathing lungs mean?’

“That was just so striking to me, and I still get very emotional around that part of the text, because visually I see that moment, I know what that moment in life was for me. … I remember having multiple moments like that throughout my childhood and adulthood.”

Northern Stage will present the world premiere production of “Citrus,” directed by Holloway-Burrell and featuring a cast of nine women, Feb. 26-March 15 at the Barrette Center for the Arts in White River Junction.

Jennings wrote “Citrus” as an undergraduate at Dartmouth College, where she developed it as her senior fellowship project. In 2019, “Citrus” was a favorite at Northern Stage’s New Works Now new play festival, so much so that Producing Artistic Director Carol Dunne chose it for the 2019-20 main-stage season.

“‘Citrus’ is so heartbreakingly beautiful and poetic,” Dunne said, “that I felt it had to be a part of this season, in the spring, when we need hope and beauty the most.”

Written in the form of a choreopoem — combining poetry, dance, music and song — “Citrus” intricately weaves together stories of black women throughout American history to create an intimate portrait of resilience and humanity. Inspired by the stories of those close to her and from history, Jennings takes a candid look at the daily struggles and triumphs of black women from the 1840s to today.

Jennings dates the inspiration for “Citrus” to her sophomore summer at Dartmouth. With passions for writing poetry and theater costume design, she got the opportunity to design costumes for a student production of “For Colored Girls Who Have Considered Suicide,” the 1976 choreopoem by Ntozake Shange.

As a theater intern that summer she also had the opportunity to attend a reading by the acclaimed Dael Orlandersmith of her new one-woman show, “Until the Flood.”

“Getting to work on ‘Colored Girls’ and witness this incredible one-woman show a black woman wrote and performed really just inspired me to put my spoken-word poetry together and create something,” Jennings said. “And I just did it for fun — and I became overnight passionate about it.”

Jennings’ poems were all about her and her own experiences. But when she decided to make it something more, she made “Citrus” her college project.

“I really started to pick apart the themes I had addressed and make a bigger list of things that weren’t in ‘Citrus’ but were really important to me to include,” Jennings said. “So there were these things I had to write poems about, which was new, but my research really informed me. It was really challenging — but it felt rewarding.”

Costume design is an integral part of telling these stories, as Jennings wrote the show from the perspective of a costume designer. (She is designing the costumes for this production, and recently became Northern Stage’s costume shop manager.)

“When I first wrote the draft, it was very much like, now we are in 2016, these are all my stories from 2014 until now, and stories from my friends,” Jennings said. “But as I did more research, I became super-interested in exemplifying not only stories but the costumes. I don’t want to say fashion, because these clothes are what women had to wear, the dress of black women over time. I wanted to learn to sew the garments of these time periods as well.

“For me, having a woman dress on stage tells that story in a very subtle but interesting way, because we’re seeing what their undergarments looked like,” Jennings said.

“Reading the script, I would never have imagined Celeste was a 21-year-old student,” Holloway-Burrell said. “There is such a depth and sage-ness to this piece. I didn’t have that depth of soul when I was her age.

“She and I joined forces and nurtured the show. We’ve taken the baby and co-parented it together artistically,” Holloway-Burrell said.

They don’t always agree, but have forged a trust.

“We have crafted a working relationship that feels good for both of us. Sometimes that means, ‘That’s not what I meant by that’,” Holloway-Burrell said. “There are still times where we’ll be in rehearsal and so we say to everybody, ‘There’s times you’ll see Celeste and I doing this. And it’s not bickering — it’s our love language working on this show, it’s what we do.’”

Jennings has had some real surprises in rehearsal, and she wasn’t always happy about them.

“As I wrote the play, it was like I’ll perform it to myself in front of the mirror. That’s how I wrote it, that’s how I figured out the order. It was just me that entire time. It’s like this is my play,” she said. “And from the very first time that I had a reading at Dartmouth, it was so interesting watching other people take something you think you have so specifically put on a sheet of paper, and interpret it completely differently.”

And that made Jennings anxious.

“But Jameeka told me, because you have all the answers doesn’t mean you should share it with the actors,” Jennings said. ‘‘You went on a journey to write this and figure out what you wanted to see — and it’s so much more special and meaningful if you let them go on their journey as an actress, figuring out where it needs to be and going from there.

“It really stuck with me because it just makes so much sense,” Jennings said. “From that moment, I’m really fascinated with how people interpret it.”

A post-show reception with the company at Trail Break Taps + Tacos follows the opening night performance Feb. 29. A free Spot On conversation with Celeste Jennings will contextualize the production at 3 p.m. Sunday, March 1. Optional post-show conversations will follow evening performances on Saturday and Sunday, March 7 and 8.