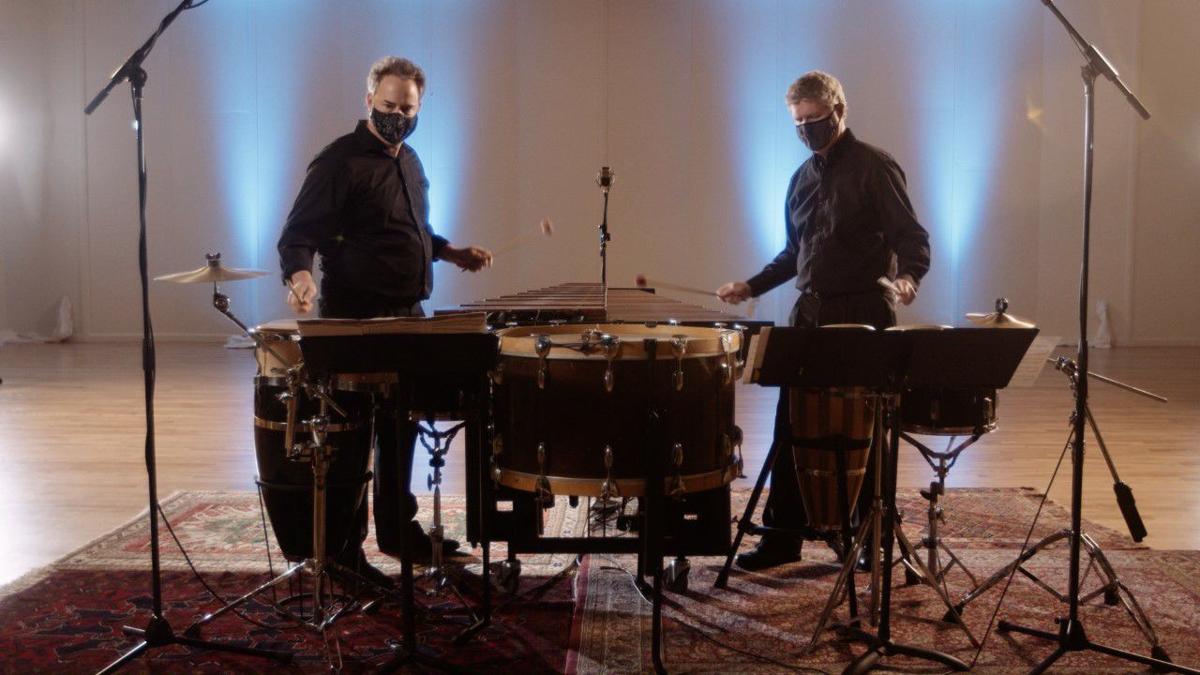 VSO percussionists Nicola Cannizzaro, left, and D. Thomas Toner are, along with four cellists are featured in “Music for Days Like This” to be streamed online Dec. 19 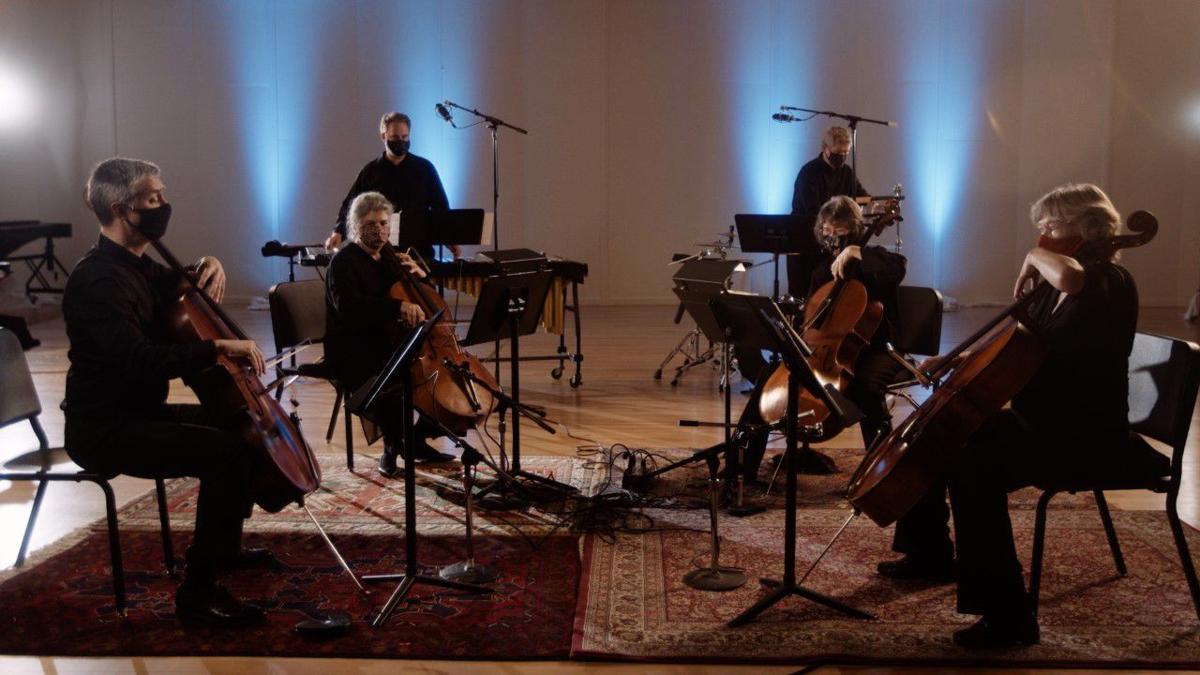 Filming the VSO’s Dec. 19 “Music for Days Like This” are orchestra members: in foreground, cellists John Dunlop, Perri Morris, Bonnie Klimowski and Dieuwke Davydov; and, in back, percussionists Nicola Cannizzaro and D. Thomas Toner. 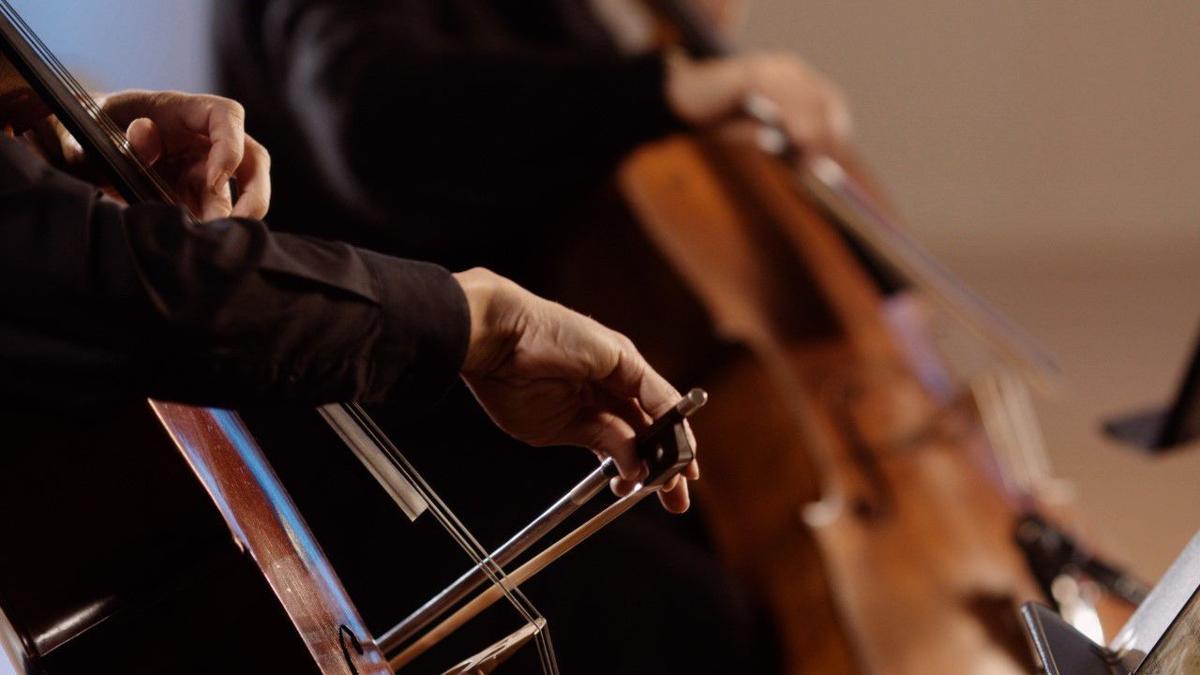 VSO percussionists Nicola Cannizzaro, left, and D. Thomas Toner are, along with four cellists are featured in “Music for Days Like This” to be streamed online Dec. 19

Filming the VSO’s Dec. 19 “Music for Days Like This” are orchestra members: in foreground, cellists John Dunlop, Perri Morris, Bonnie Klimowski and Dieuwke Davydov; and, in back, percussionists Nicola Cannizzaro and D. Thomas Toner.

When the Vermont Symphony Orchestra presents its second “Music for Days Like This,” online at 7:30 p.m. Saturday, Dec. 19, it will feature some unlikely ensembles, including VSO percussionists D. Thomas Toner and Nicola Cannizzaro.

“Seeing Tom and Nick play a percussion duo is a whole different world than seeing them play the bass drum, the triangle and maybe a cymbal in the symphony,” explains Matt LaRocca, composer and the VSO’s creative projects chairman, who curates the VSO’s online programming.

“Music for Days Like This” unlike Juke Box, which is streamed live, is recorded at the Elley-Long Music Center in Colchester.

“We recorded this in advance to have more behind-the-scenes footage, more interviews with people who are playing the music, people who have written music for it, which we can’t do in a live show right now,” La Rocca said.

A major purpose of both programs is to provide opportunities to VSO musicians during the COVID-19 pandemic.

“Since we’re not going to play with an orchestra still for a long while yet, we really go out of our way to showcase the different chamber ensembles, and the different sides of the VSO that you don’t see in a full orchestra concert,” LaRocca said.

Opening the program is Mozart’s beloved motet “Ave verum corpus,” K. 618. But rather than a chorus, it will be performed in an arrangement for four cellos by W. Thomas-Mifune.

La Rocca compares Molly Joyce’s “Release,” the world premiere commission for the entire ensemble, with Pärt’s “Fratres,” which LaRocca arranged for the program.

“‘Release’ is a fantastic companion for the Pärt because it has a similar introspective quality,” LaRocca said. “It uses a lot of similar tonal techniques, with harmonics in the beginning of it. Then it slowly transforms into this real celebratory (mood), whereas the Pärt stays introspective the whole time.”

Joyce is a Juilliard-trained composer on the faculty of New York University, and active in the New York new music community. She is also a 2010 graduate of the Lake Champlain Chamber Music Festival’s Young Composers Seminar in Colchestter.

“I think she’s a brilliant composer,” La Rocca said. “In my mind, she really inhabits this world of new music where, yes, it’s classical, but she brings in other influences too, which makes a really interesting end product.”

La Rocca calls “As One” by Gene Koshinsky “one of the coolest percussion duets I’ve ever seen.”

“Watching it is as amazing as what you hear,” he said. “It’s one of those pieces where the actual choreography and movement that Tom and Nick do, it’s so much fun to watch. They act like a mirror image to one another all the time while sharing this giant five-octave marimba.”

Sydney Guillaume, a 38-year-old composer originally from Haiti, now living in Portland, Oregon, will be represented by “Lespwa” for cello ensemble.

“Lespwa is ancient Creole for hope,” La Rocca said. “Sometimes when I program, I think of companion pieces. Here, I hear vestiges of the Mozart, especially in the cello arrangement, not necessarily if ‘Ave verum corpus” was done traditionally. But his writing is really melodic, very sing-song. It’s a beautiful piece.”

“It’s upbeat and fun and kind of rocking,” LaRocca said. “It’s a little different from what we’ve usually done. It’s fun to watch Tom and Nick.”

“Carole is a cellist from the Nashville Symphony, and also plays in the National String Machine,” La Rocca said. “This is a very traditional four-cello suite over which Tom and Nick will be improvising.”

LaRocca asked the composer how she felt about the percussionists improvising her music.

“She wrote back right away: ‘I love it! Great!’” LaRocca said.

With this concert and the Jan. 16 Juke Box, the VSO’s announced programs will end. What next?

“We’re still trying to figure things out,” La Rocca said. “We still are going to find a way to put on shows regardless.

“Between the two shows we’ve done, the responses have been overwhelmingly positive — which is great!” he said. “From our standpoint, we’re really happy with what we’ve been able to put out.”