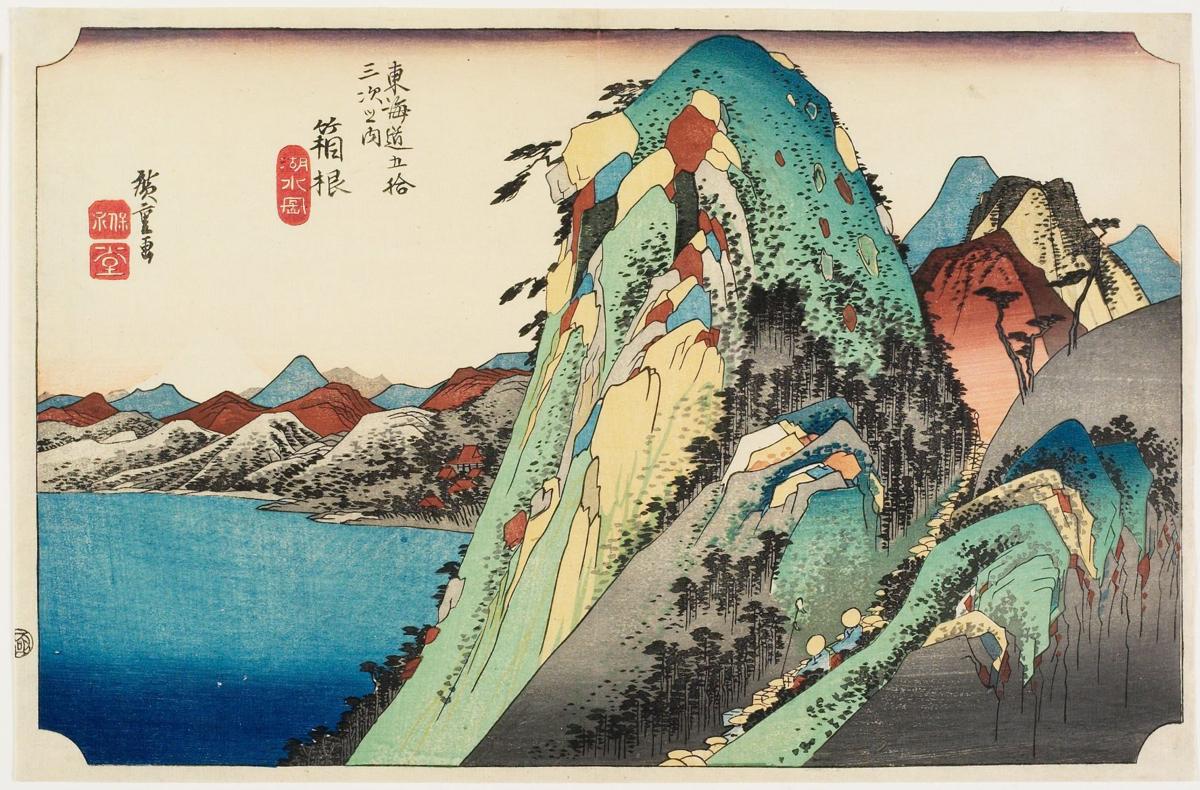 Hiroshige: “Hakone: Lake Scene” from the 53 Stations of the Tokaido. 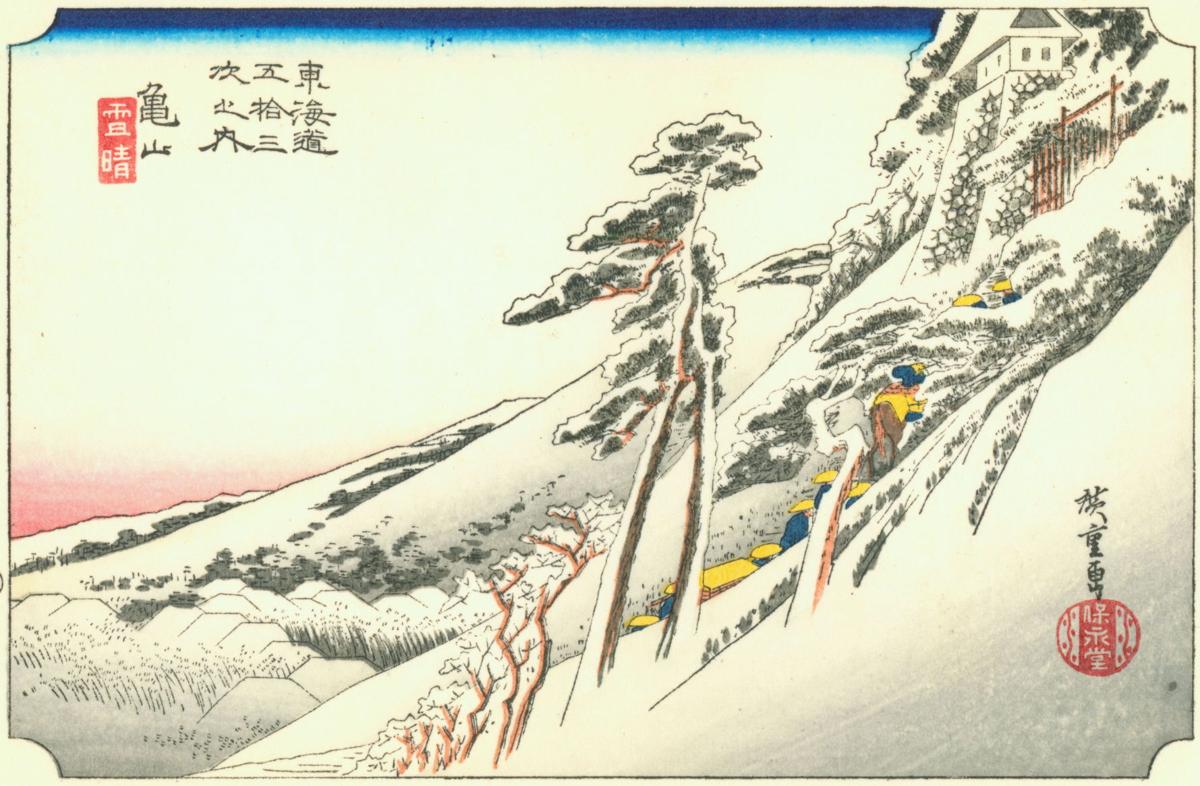 Hiroshige: “Kameyama: Clear Weather After a Snowfall” from the 53 Stations of the Tokaido. 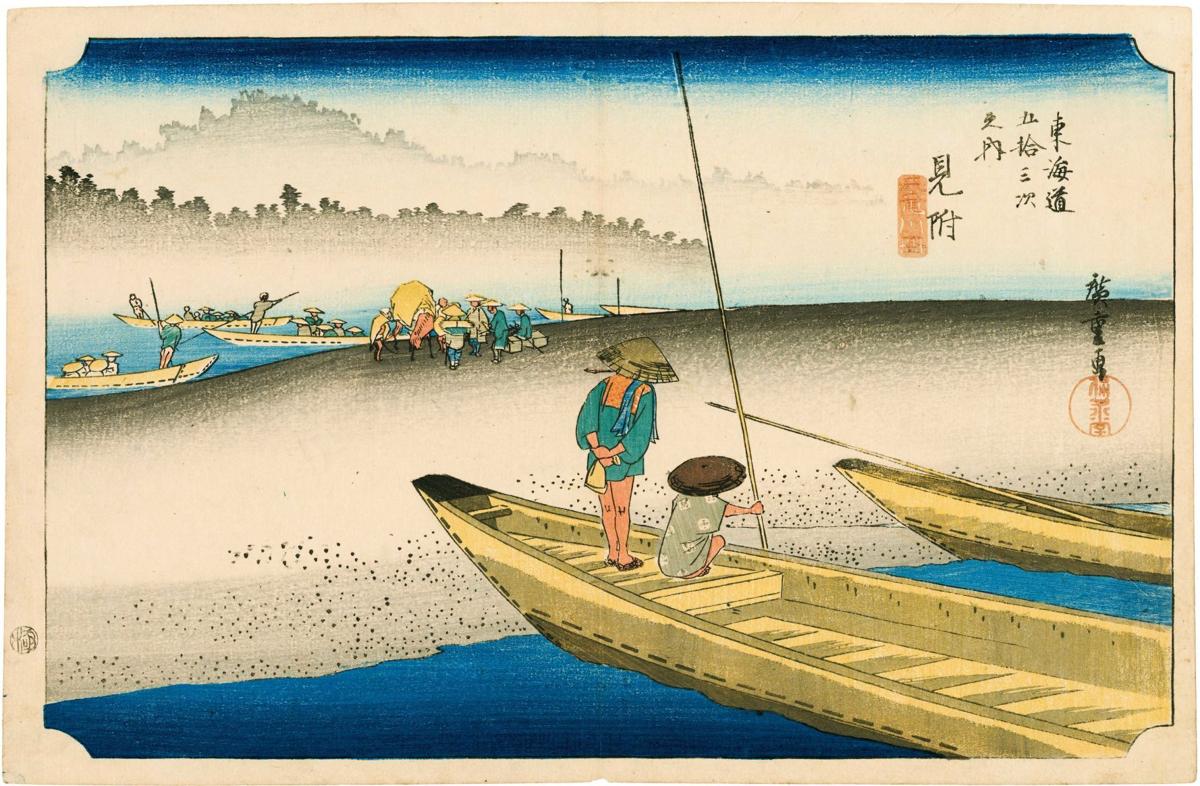 Hiroshige: “Mitsuke: Tenru River” from The 53 Stations of the Tokaido. 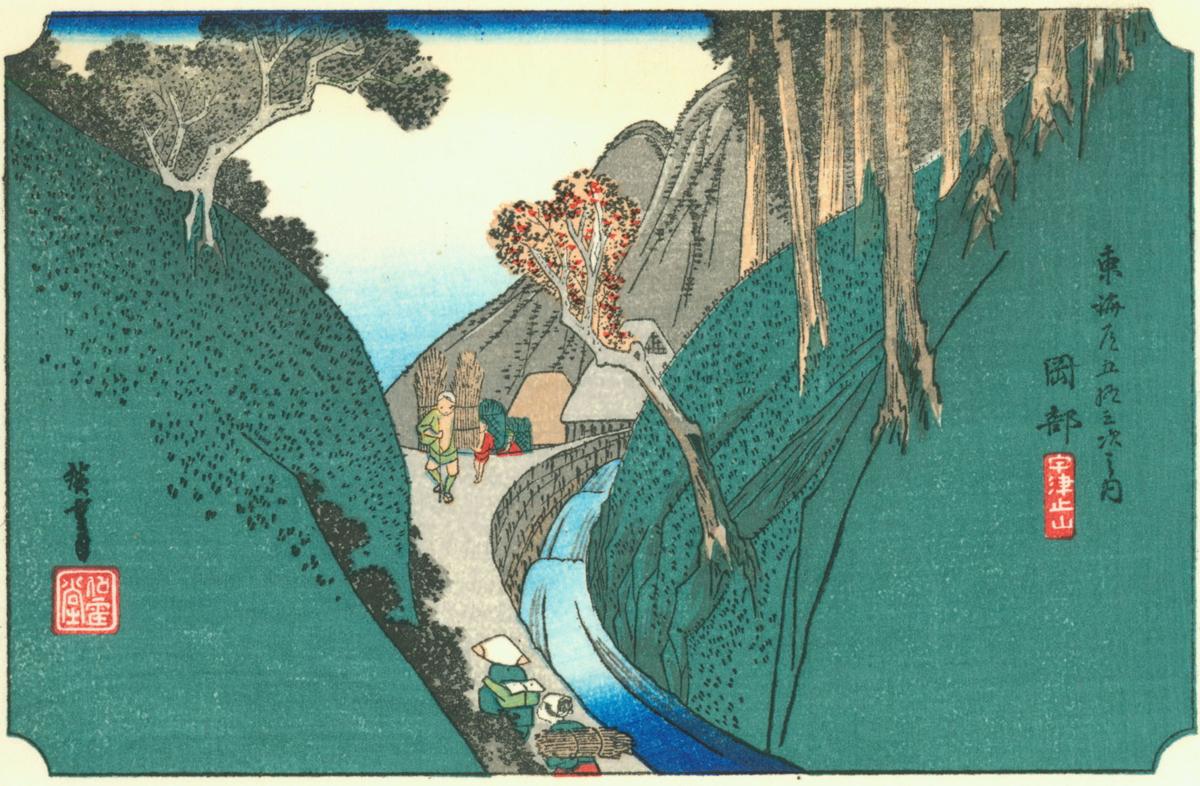 Hiroshige: “Okabe: Mount Utsu” from the 53 Stations of the Tokaido. 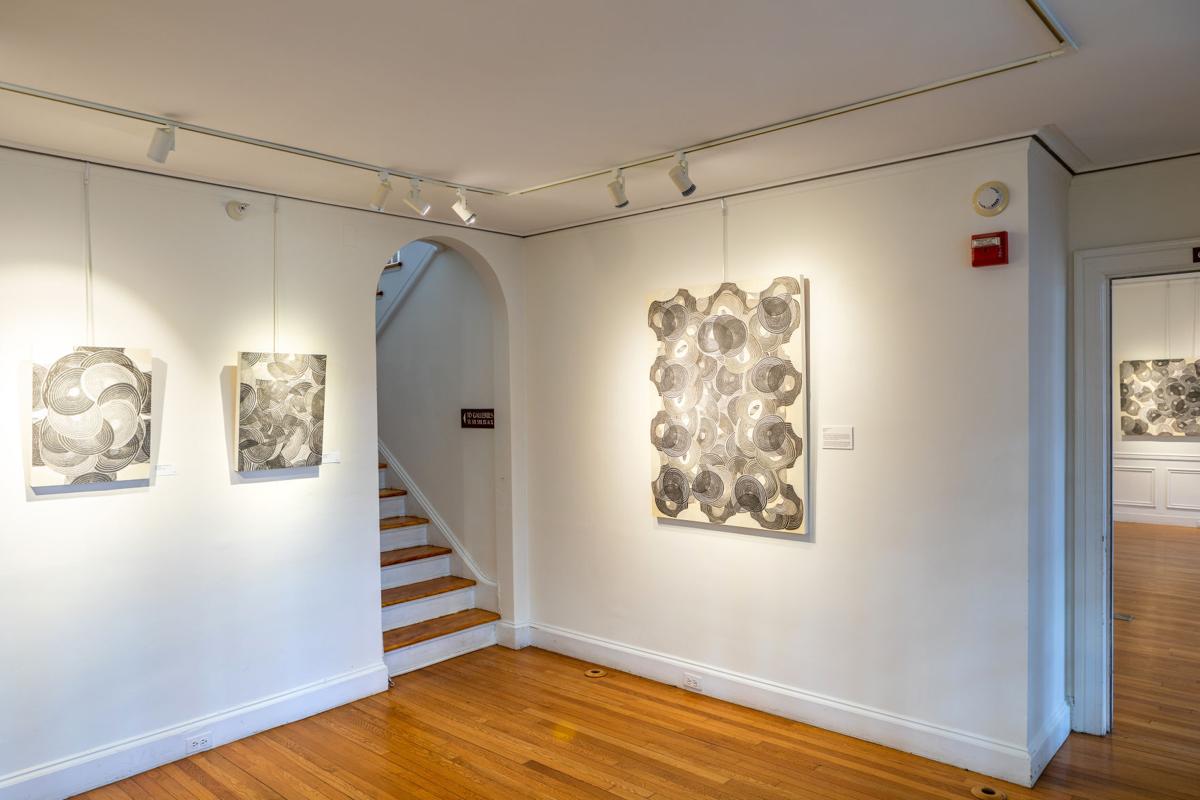 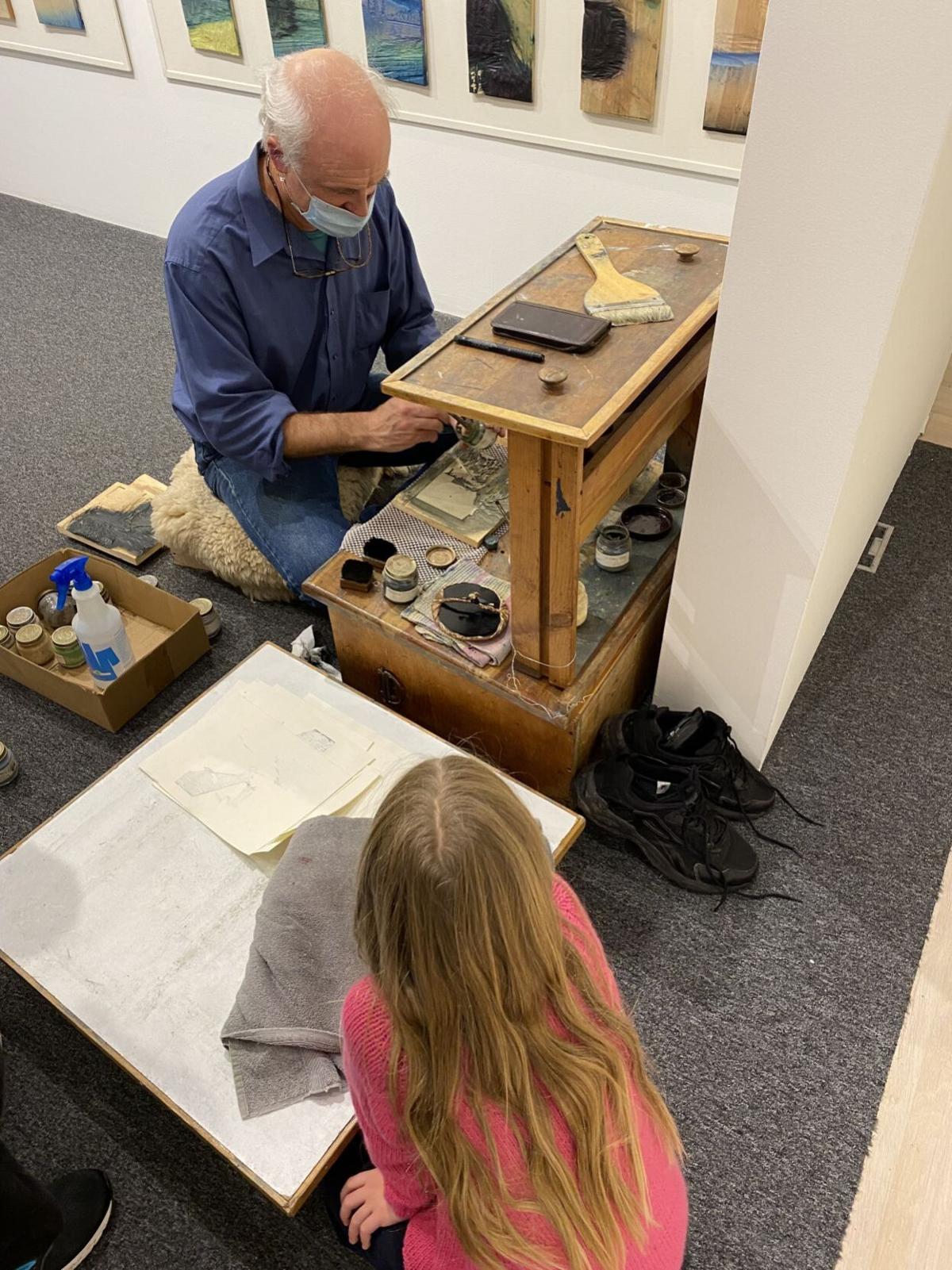 Hiroshige: “Hakone: Lake Scene” from the 53 Stations of the Tokaido.

Hiroshige: “Kameyama: Clear Weather After a Snowfall” from the 53 Stations of the Tokaido.

Hiroshige: “Mitsuke: Tenru River” from The 53 Stations of the Tokaido.

Hiroshige: “Okabe: Mount Utsu” from the 53 Stations of the Tokaido.

Fishermen with their morning catch, travelers on a tree-lined path beneath Mount Fuji, intrepid tea house proprietors beckoning business — an exhibit at Southern Vermont Arts Center this winter offers a time traveling jaunt to Japan in the early 1800s.

Exquisitely composed and crafted woodblock prints by the Japanese artist Hiroshige first took viewers to far-flung corners of Japan two centuries ago. His work transported audiences then to places that most had never seen. Today they are just as enchanting.

This art form of Japanese woodblock printing lives on, now in the hands of contemporary artists who draw on its history and tradition as they take it in new directions. A second SVAC exhibit featuring artwork by members of a print collective, the Mokuhanga Sisters and their invitees, fills the 12 galleries of Yester House.

“Hiroshige and the Changing Japanese Landscape,” in SVAC’s Elizabeth C. Wilson Museum, features more than 100 woodblock prints by the beloved ukiyo-e artist as well as works by some of his contemporaries and influences. The Hiroshige collection is on loan from SVAC artist member and collector Steven Schlussel and was curated by Alison Crites, SVAC’s manager of exhibitions and interpretive engagement.

“The World Between the Block and the Paper” bridges past and present. Mokuhanga comprises the words moku (wood), han (impression) and ga (picture). The eight artists in the Mokuhanga Sisters collective originally met in Japan, but live around the world. Vermont artist Patty Hudak, a member of the group, co-curated the exhibition with Crites.

SVAC is known for showcasing living regional artists, but Schlussel’s collection and generosity in sharing it offered a rare opportunity.

“This is both a historical exhibition and a chance to highlight a nonwestern artist in a medium that we have not represented in the recent past,” Crites said.

Hiroshige, was born Ando Tokutaro in Tokyo (then Edo) in 1797 into a family of samurai background. He studied art under a leading ukiyo-e artist of the day. Ukiyo-e translates to “picture of the floating world.” Its subjects dealt with life’s fleeting enjoyments, including beautiful women and landscapes. While his early work fell more in the former category, around 1830 Hiroshige turned to landscapes.

In 1832, Hiroshige had the rare opportunity to travel in an official procession from Edo to Kyoto along the 300-mile Tokaido route. He sketched along the way. Back in Edo, Hiroshige produced “The 53 Stations of the Tokaido.” These were published though the exacting, multi-layered process of multiple hand-carved woodblocks.

Japan already had a strong printmaking tradition, but Hiroshige brought his distinct flare to the work with his composition, use of color and atmospheric quality. They were very popular, selling as affordable art to Japan’s rising merchant class.

Taking time with Hiroshige’s images allows their narratives to unfold. Excellent SVAC labels guide viewers to a wealth of details.

In “Kakegawa,” as travelers cross a bridge with Mt. Akiba in the distance, a line of laborers toil in the rice paddy. Two red kites float overhead, one still tethered. The other, with broken string trailing, flies free.

In “Hakone,” a long line of hats thread their way single file up a steep trail through a narrow mountain pass, as we get an aerial view of the march. In “Namuzu,” a traveler carries a huge red mask on his back — its blue eyes stare out expressively. According to the label, the mask represents Sarudahiko, god of the road.

Other Hiroshige landscape and travel series that are also well represented in the show include views of Edo and scenes from Japan’s provinces. The images are in a way travel posters of their day, inviting viewers into the journey.

“There is the literal story of the physical journey that is visually narrated to us through Hoeido Tokaido series,” Crites said.

“It is also kind of a metaphysical journey. If you spend time with these images you get to go on your own journey — the idea of mental wandering or visual escape. The pieces encourage slow looking. A modern-day viewer can really engage with them,” she said.

An installation by New Hampshire artist Matt Brown illuminates the process of Hiroshige’s work. Brown, who turns to the New England landscape for his subjects, presents a series of carved woodblocks clearly laying out steps of carving, inking, pressing paper onto the blocks to create final image.

In “The World Between the Block and the Paper,” viewers see a terrific range of work that these contemporary artists are doing in the medium, and also get a sense of the Mokuhanga connections to nature and community

The intimate hands-on process of woodblock printing is central to their work. Using natural materials of wood, water-based paint, plant-based papers, the medium connects to the natural world. Through carving, inking and pressing, it’s very tactile.

The artists in the Mokuhanga Sisters collective came together through the Mokuhanga Innovation Lab in Japan in 2017-19. They are based around the world, including in Japan, Ireland, Kansas and Vermont.

Along with the artwork, each artist has a small text on their Mokuhanga practice, influences and words about the artwork of the teachers or students they invited to participate in the show and qualities of their work.

“A lot of images are very calming, and there are also images really examining contemporary issues,” Crites said.

Southern Vermont Arts Center presents “Hiroshige and the Changing Japanese Landscape,” through Feb. 27, in the Elizabeth De C. Wilson Museum; and “The World Between Block and Paper,” a Mokuhanga exhibition of artists and teachers, through March 27, at 930 SVAC Drive in Manchester. Admission is $10, $5 for students and seniors (under 10 free); call 802-362-1405, or go online to www.svac.org Hours are: 10 a.m. to 5 p.m. Tuesday-Sunday.