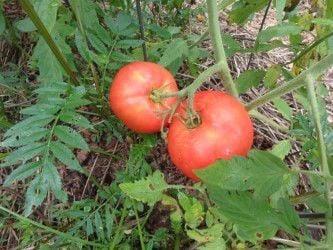 My first slicers are ‘Jet Stars,’ an early hybrid. 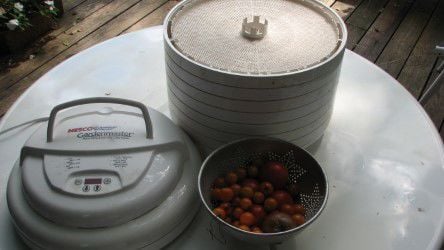 My first slicers are ‘Jet Stars,’ an early hybrid.

If I could only bring the seeds of one plant with me when exiled to a distant island, I would bring tomato seeds. Tomatoes are the center of much of my cuisine from soups and stews to sandwiches and salads. They are tasty raw or cooked, are healthy to eat, and relatively easy to grow and propagate. My tomatoes are ripening up now, and I’m not only eating them two or three times a day, I’m putting them up for winter use.

My mother and grandmother slaved over a hot stove in August and September to can whole tomatoes, or to make sauce and store it in jars. I rarely do. Mainly, I freeze tomatoes whole. I call them my “red rocks” and store them in zipper bags for use in soups and stews.

To prepare red rocks, I simply rinse them off, allow them to dry, and slip them into gallon freezer-grade plastic bags. I use a straw to suck the air out of the bag after I have the zipper closed 99% of the way. That minimizes frost on the tomatoes in the freezer.

To use frozen tomatoes, I just run hot water from the faucet over them. The skin thaws quickly, and rubs right off. Or I’ll drop a few in a pan of hot water. That helps to thaw the tomatoes and makes them easier to chop up for use. If I freeze cherry tomatoes, I don’t bother removing the skins before cooking with them.

I have a couple of food dehydrators that I use to dry tomatoes, too. The Cadillac of dehydrators is the Excalibur. Mine is a $300 deluxe model that blows hot air sideways equally over all nine trays. My other is the NESCO American Harvester, a serviceable machine that pushes air up or down through a stack of trays.

The downside to the NESCO model is you must rotate the trays to get equal drying. And it uses 1,000 watts of energy per hour, while the Excalibur uses only 660 watts. Still, at about $125 for the basic machine, it is more affordable. You can stack up to 30 round 15-inch trays over the fan and heating element, but the more trays you add, the longer it takes to dry all the food. I find about eight trays is as many as I want to stack.

Most summers, I grow eight to 12 Sun Gold tomato plants, and each is prolific. Most of the fruit I dry in my dehydrators. I cut them in half and dry, cut side up. I store them in zipper bags in the fridge or freezer, and use them in soups and stews. Dried tomatoes can be stored in the pantry, too.

Sometimes I dry plum or slicing tomatoes. I cut them about 3/8 of an inch thick. They tend to stick to the trays, so be sure to buy the special no-stick screens to put on the trays. That makes clean up much easier.

A sandwich is not really a sandwich, for me, without slices of tomato. One way to save slices of tomato for winter use is to roast them. I do so in the oven at low heat until they are caramelized and soft, not tough and dry. Then I place them in zipper bags and freeze them — but just one layer of tomatoes per bag. When I crave a tomato in my sandwich, I pull out a few slices and heat in my toaster oven until warm. Not a fresh tomato, but better than most sold in the grocery store in January.

I also make tomato paste. Lots of paste. I store it by freezing it in ice cube trays, and then putting it in zipper bags when frozen. No more half-used cans of purchased paste going fuzzy in the fridge for me.

To make paste, I use imperfect tomatoes — and I usually have plenty. I cut out the bad spots, then core them. I squeeze the cored tomatoes in the sink, which gets rid of most seeds and lots of juice. Then I quarter them and place in a food processor. I puree them, then add to a large enameled iron pot and cook them slowly for hours. I know they are done when I can literally stand up a spoon in the pot. I let it sit all night, uncovered, to cool and lose some more water. In the morning, I spoon the paste in the ice cube trays. When frozen, I empty the trays and put cubes in zipper bags.

Canning tomato sauce the old-fashioned way is hard work and takes hours. Part of that work is blending the tomatoes and herbs, salt and pepper to get the flavor and consistency just right. In addition to pureed tomatoes, I use onions, garlic basil, oregano, parsley and thyme. I cook it for 45 minutes or so, as I like it nice and thick.

But then there is the canning itself. First you have to boil the jars and lids to sterilize them. Once filled with cooked sauce, one needs to boil the sauce in sealed jars to kill botulism, a potentially fatal disease. Forty minutes at a rolling boil is recommended. All in all, making seven jars of sauce — which is what a canning pot can hold — takes an evening.

The Lazy Guy technique for making sauce is to freeze it, not can it. I have an aversion to using plastic for storing food, but make an exception for tomato sauce. I have quart plastic containers with screw tops, though one can also use zipper bags. (Since I have two large freezers, I have plenty of space for garden produce.)

People raise their eyebrows when I tell them I grow between 35 and 50 tomato plants each year. But since I eat my own stored tomatoes all year, I can barely grow enough of the Queen of the Garden.