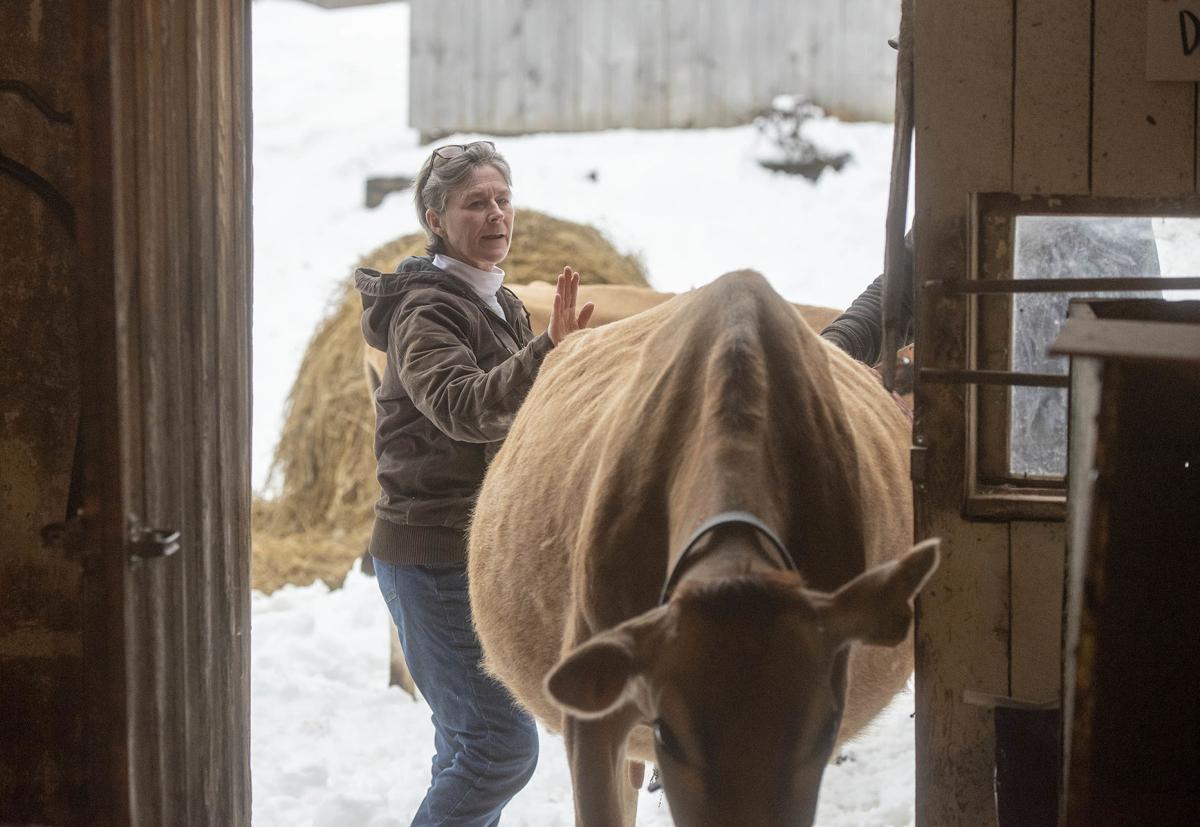 Catherine Dunlop moves a cow into the barn for milking at Hollister Hill Farm in Marshfield. 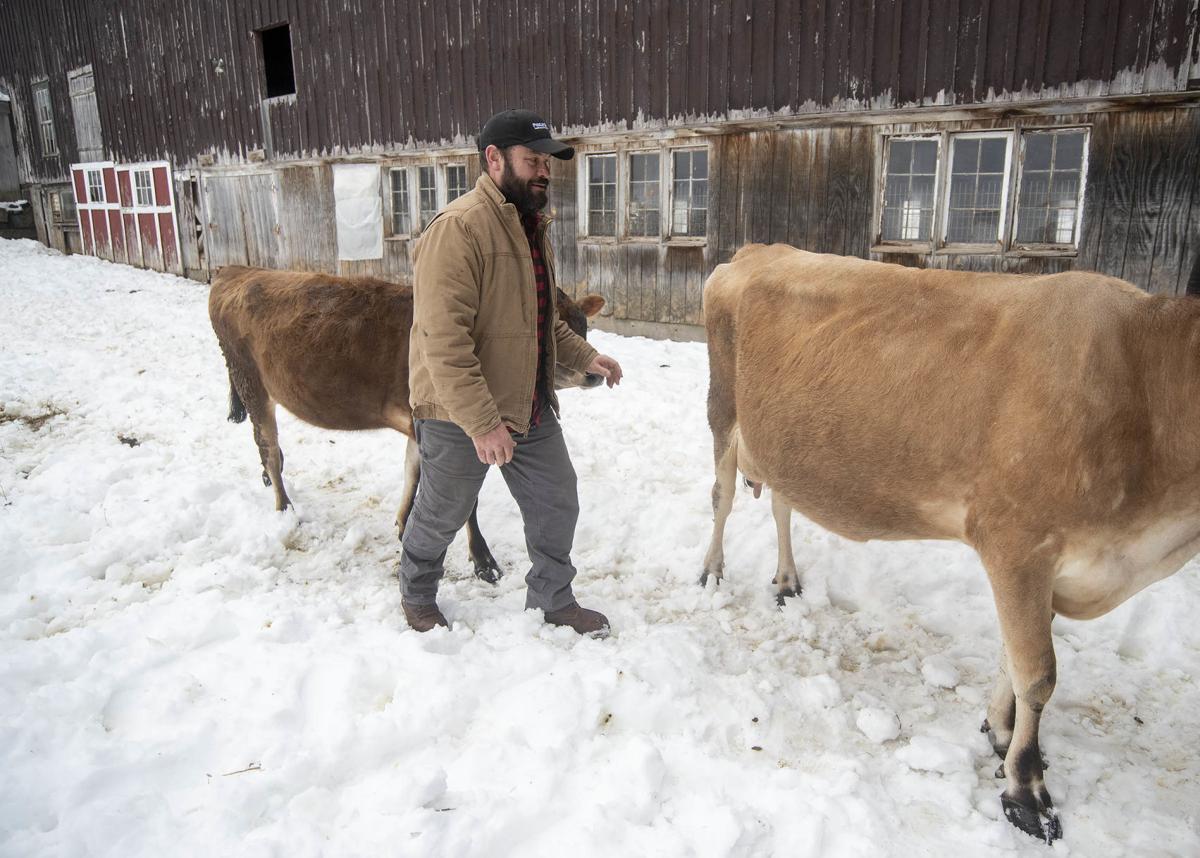 Neil Dunlop moves cows into the barn for milking at Hollister Hill Farm in Marshfield. 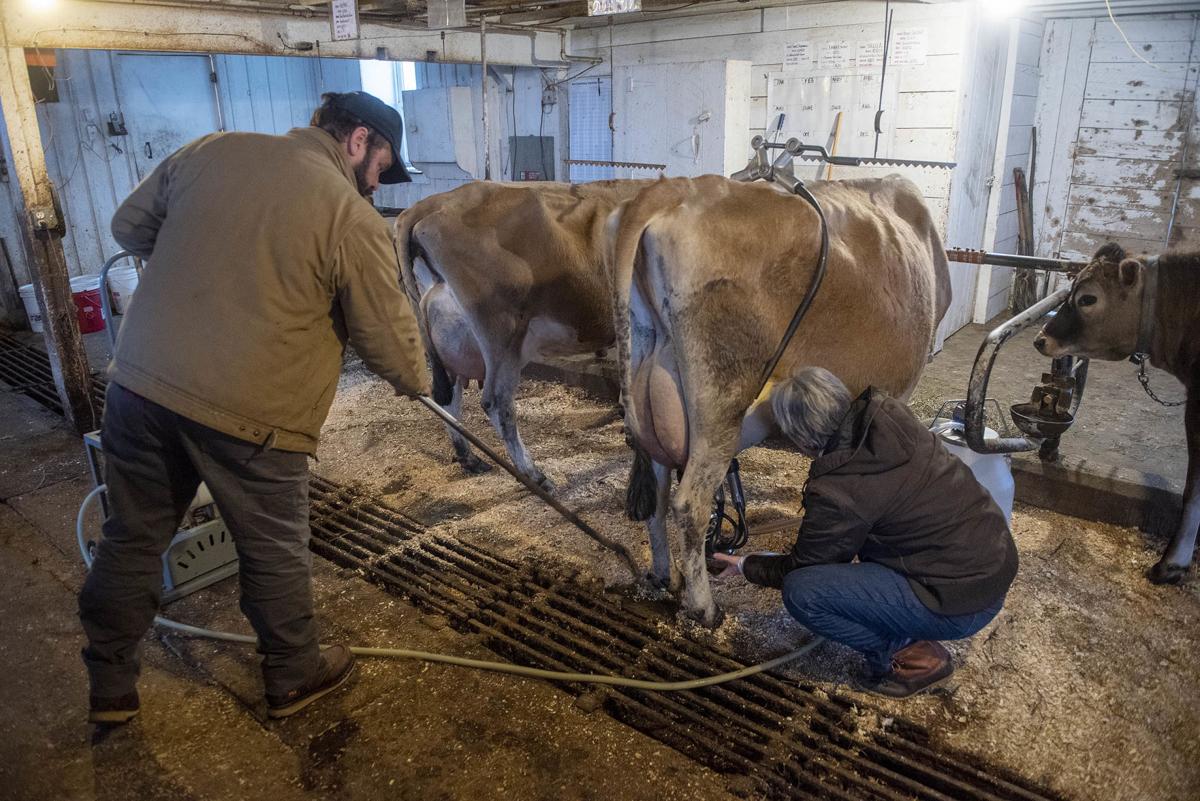 Catherine Dunlop moves a cow into the barn for milking at Hollister Hill Farm in Marshfield.

Neil Dunlop moves cows into the barn for milking at Hollister Hill Farm in Marshfield.

It was just three months ago that Neil Dunlop traded a pressed work shirt and tie for head-to-toe Carhartts and thick leather Kinko gloves. I forgot to ask him whether his full beard and weathered-Vermont-man look are new additions, or if he sported those before becoming a farmer; but regardless of which it is, both his work attire and workday have changed dramatically.

During the week of Thanksgiving last year, his family — including his wife and four kids — moved from Washington, D.C., to take over ownership of Hollister Hill Farm and Bed and Breakfast, in Marshfield. Now he is on a steep learning curve as he finds a whole new way of making a living and, it turns out, a life.

Today, his workday revolves around taking care of about 120 animals, along with a local farmhand who he hired to work full-time on the farm. The farm produces raw milk, pork and beefalo products and eggs. Dunlop is gearing up for his first ever maple season. All of these products are for sale in an on-farm store, with an honor-system cash box, all of which he also manages. And, in a story that’s almost too rich to not be made up, last week, his farmhand (who is actually the guy who knows how to do everything, says Dunlop), broke his femur shoveling snow off of a roof at home. So, Dunlop is on his own for a few months.

It’s a far cry from his 25-year career in journalism and public relations, working for an automotive company. Although, he jokes that his current workday isn’t that dissimilar to his old one: “I’m still shoveling manure, just like I was in PR.”

In reality, though, it is night-and-day different, almost beyond comparison. Instead of the typical white-collar job tasks of Zoom meetings, emails, and a daily game of tennis, he’s working acetylene torches and metal cutters for the first time, as he struggles with a failing manure flush system in his barn.

“When you live in big cities and you have white collar jobs,” he says, “you don’t need to do anything. You can’t, because you’re working and so you hire a plumber, and say ‘Can you come over and fix this?’”

On a farm, he’s learning, it would cost far too much to call someone else to fix every problem. And, he points out, that’s your job as a farmer, to do all of those things yourself.

It’s all easily manageable, he says, when things are working smoothly; but when things on the farm break, or his farmhand becomes injured, it becomes far more challenging and time-consuming. This all might seem like a no-brainer to those who have been farming all their lives, but to Dunlop, it’s a profound realization as he adjusts to a whole new life.

For example, take the manure system in his barn; the metal keeps shearing in half, and this time, it broke under the concrete floor, which is he now pulling up to repair the break. He spent five hours on Saturday getting it back to running and then, on Sunday, it broke again.

Again, he compares this new reality to his old life: “When you live in a city, you kind of expect everything to go smoothly,” he says. “And your ideas of fixing things, is they get fixed and they stay fixed, and they don’t break again.”

He’s learning, the timing of things isn’t always up to him. But that’s just how farming works, as any farmer, now including Dunlop, will tell you.

Milk as a public service

The most visible and obvious change to Dunlop and his wife Catherine is their new understanding of the economics of farming and, in particular, producing milk. They sell raw milk direct to customers from their farm store for $5 per gallon, yet Dunlop estimates it costs about twice that to produce. Despite this being a money-loser for them, it is an important service for the community who relies on the milk, and the former owners, Bob and Lee Light, wanted milk production to continue.

While this reality of farming is a new discovery for the Dunlops, it’s an old problem for Vermont’s farmers and agriculture policy makers.

Jake Claro, with Vermont Sustainable Jobs Fund, says that sometimes in dairy farming there are cultural imperatives to keep producing milk, even when it doesn’t make the best business sense.

VSJF is a nonprofit in Montpelier that coordinates the Vermont Farm to Plate Initiative, and they work with numerous partners and stakeholders to advance the consumption of local food to support a vibrant farm and food economy. Claro says Vermont is going through a bit of an identity crisis when it comes to how we think about dairy farming, though many are working to address these issues.

As for Dunlop, he says his family is fortunate, because his wife was able to keep her job in software sales and work remotely from a home office at the farm. There is no way, he says, that they could sustain the farm without her additional income.

They are starting to make some changes, like bringing on new products from Local Doughnut and Manghi’s Bread, and switching from glass milk bottles to more affordable plastic jugs, all of which lead to slight improvements in profit margins. Their goal is to make some investments now and have the farm break even in its first year, and then go from there to grow revenues.

They’re planning an orchard to be planted in the spring, increasing maple syrup production, and considering adding animals like sheep for wool.

He’s quick to point out that he isn’t complaining, though, but rather reflecting on how different life is on a farm from being in the city.

“It’s totally different than your expectations for how things are when you live in a city. Completely different,” he says. “Your life is different, and this is now what you do.”

Claro of VSJF points out that none of Dunlop’s story is unusual. In fact, it’s all reflective of the challenges faced by any new farmer, on top of the market challenges that exist, as well.

“This is a generational conversation,” says Claro, “to ask, ‘How does Vermont agriculture continue?”

Handing over the farm

An important part of that conversation is farm succession. When the Dunlops took over the farm from the Lights, Bob and Lee had been living the hard-working farming lifestyle for several decades. They were tired and ready to retire, but their farm sat on the market for many years and several offers got their hopes up, and then fell through.

The Lights’ story also isn’t an unusual one, says Claro. Farm succession, that is, how working farms pass from one generation to the next, is a significant dynamic shaping agriculture in Vermont today. He says it’s something that isn’t so much in the public consciousness when it comes to understanding farming.

VSJF, along with the Vermont Agency of Agriculture, Food and Markets, recently released the Vermont Agriculture and Food System Strategic Plan for 2021–2031. In it, are a number of issue briefs, including one specific to farm succession. It points out that at a time when most farms are challenged to be profitable, farms are also set to transfer to new ownership at an unprecedented rate, yet there are relatively few incoming farmers interested in or prepared for taking over these farms.

The worry is the significant change to the farming landscape that these dynamics have the potential to create. In other words, we could see fewer farms and less local food production.

“A lot of farmers find it difficult to make this transition,” says Claro. As land prices rise, this high cost of starting or taking over a farm is a huge impediment, and older farmers are finding it harder to hand over their farms to the next generation. The cost of land in Vermont has risen dramatically, and farm cash flow isn’t going up proportionally.

All of this makes it very hard for new farmers to get started, and for established farmers to sell their farms.

Still, difficulties and economic realities aside, the Dunlops say they can’t believe where they are now, and how different it is from where they were just a few months ago.

About three days after moving in, a pig died on the farm, and Dunlop drove it to “the boneyard,” in a back corner of the farm, in the bucket of his tractor. His whole family piled in. They laughed at how one week they were living a D.C., and the next week they’re moving a dead pig in a tractor.

I asked Dunlop how he feels about his choice to leave his city life behind and become a farmer; is he happy he made that change? He laughed and said it might have been an unfair question on this particular day, when he’s gearing up to spend the afternoon fixing the manure system ― again.

“Yeah,” he says, “there are times I think, ‘I could just be sitting with my feet up by the fire.’”

His wife tells him she’s never been more content. He enjoys the quiet here, the slower pace of life, the helpful and friendly people, a cash box that works on the honor system, and the expanse of stars that greets him when he goes out at night, she said.

It all reminds him of a quote he saw recently, from Rodney Williams, that reads, “Being rich of heart makes you wealthy beyond compare.” And that sentiment resonates with him, in his new chapter of life.

Says Dunlop: “We may be worn out and the economics may not be just and everything else, but I think our hearts are happier.”

The Dunlops have shared their story on both a Dec. 31, edition of “Relocalizing Vermont,” a WGDR radio show hosted by Carl Etnier, and at a Feb. 6 event at the Capitol City Grange. A recording of the event at the Grange can be found by going to the “Grange Notes” section of the Grange website, at http://capitalcitygrange.org/