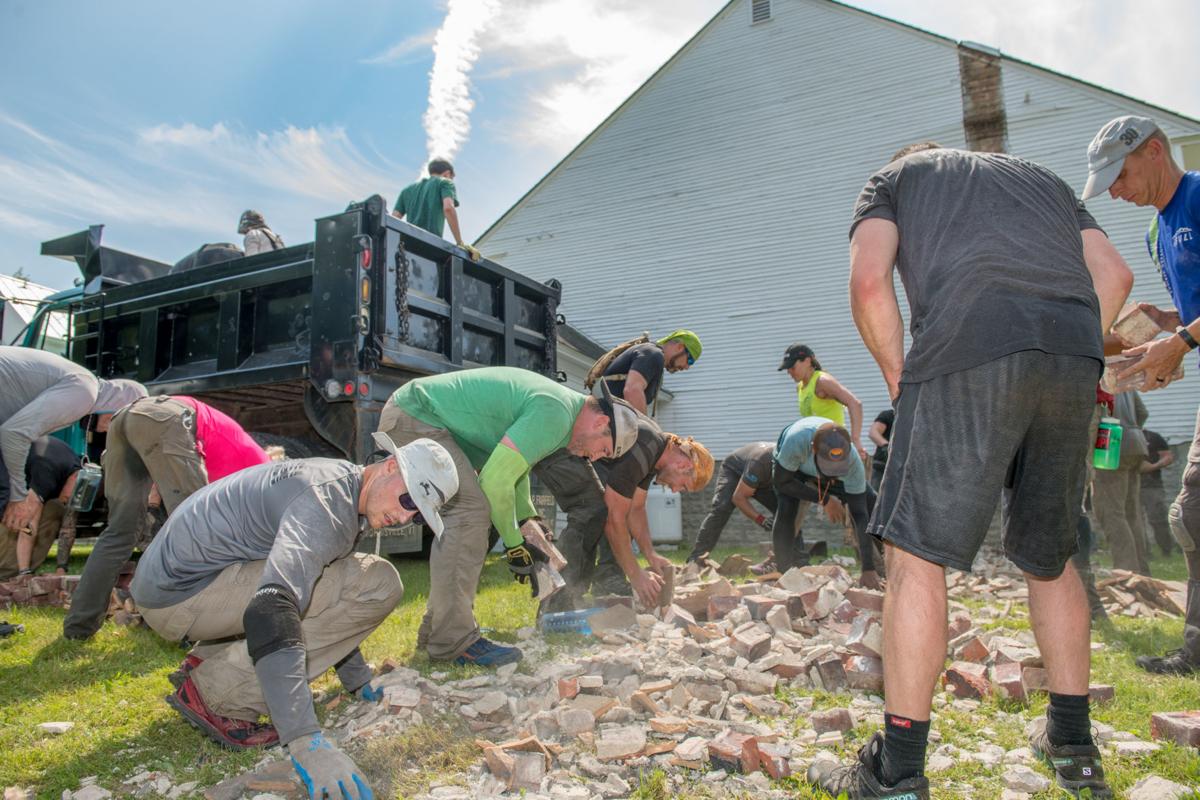 Racers who flunked out of the 2019 Spartan Death Race look for redemption behind the Pittsfield Town Hall, which needed some community help after its chimney collapsed during the weekend. Competitors were allowed to help clean up the rubble following the collapse and given a chance to get back in the race. They had competed without sleep for over 28 hours, covering 50 miles in various challenges. 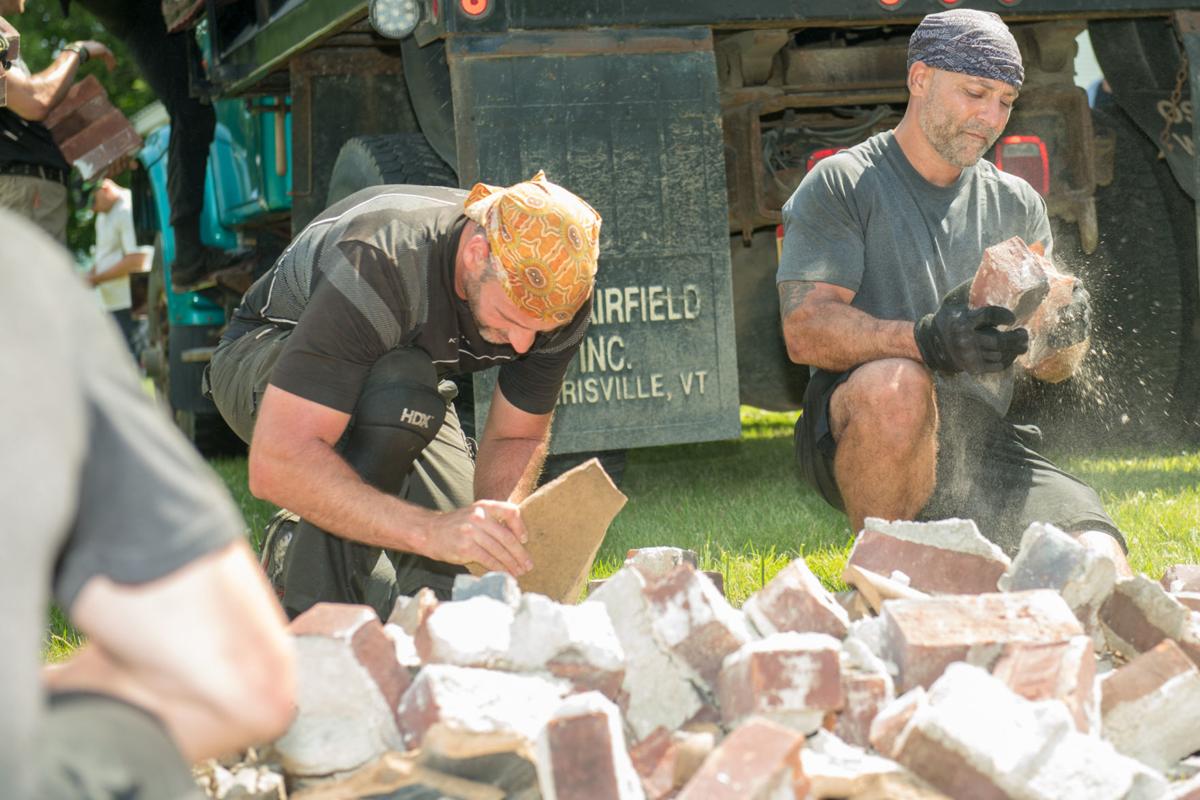 Spartan Death racers looking to get back in the competition work to chip off mortar from bricks before loading them into a dump truck behind the Pittsfield Town Hall last Wednesday afternoon.

Racers who flunked out of the 2019 Spartan Death Race look for redemption behind the Pittsfield Town Hall, which needed some community help after its chimney collapsed during the weekend. Competitors were allowed to help clean up the rubble following the collapse and given a chance to get back in the race. They had competed without sleep for over 28 hours, covering 50 miles in various challenges.

Spartan Death racers looking to get back in the competition work to chip off mortar from bricks before loading them into a dump truck behind the Pittsfield Town Hall last Wednesday afternoon.

PITTSFIELD — The Town Hall chimney has fallen down, but participants in the Spartan Death Race were on hand this week to gather up the bricks.

The chimney collapsed Saturday, and it just so happens that the 2019 Spartan Death Race is being held this week. The race has participants complete various obstacles and challenges and has been held around Pittsfield since 2010, said race director Jason Barnes in a Thursday phone interview.

Barnes said the race has a tradition of incorporating public works projects. He said Select Board Chairman Charles Piso contacted him after the Town Hall chimney collapsed. About 70 racers worked Wednesday to clear up every bit of brick left on the ground in less than an hour.

Barnes said fostering a sense of community is one of the things the race aspires to do, and events like this help make that happen.

“The roots of the Death Race, Peak and Spartan are here in Pittsfield, and we couldn’t host the event without the support of the community,” said Andrew Hostetler, a Spartan Death Race leader, in an email. “While we want to make life for Death Race participants as difficult as possible, we always want to support the town and give back as much as we can to make life easier for residents and help improve the community — whether that be through public service projects like picking up after a storm or collecting canned goods and money to support the place we owe so much to.”

The chimney’s collapse wasn’t a complete surprise, said Selectwoman Ann Kuendig, since people noticed last year that it was leaning out a bit. This is what prompted the town to have the entire building looked over by an engineer, who then concluded the floor was unsafe as well. The town then discontinued the building’s use as a meeting hall.

On Town Meeting Day, held in the nearby Pittsfield Federated Church, voters approved the creation of an exploratory committee to see what could be done with the Town Hall. Kuendig, who serves as chairwoman of the committee, said it has met about four times since March and is about to roll out a survey aimed at gauging what residents’ feelings are regarding the historic building.

She said the survey will be on the town’s website soon, and is going out with the tax bills next week.

About 14 people had expressed interest in joining the committee when it started, said Kuendig, but eight now regularly make meetings.

“It’s a wonderful variety of people,” she said. “They bring a lot of different experiences to the table. We have engineers, designers and long-term residents who can show us a historical perspective.”

She said the committee has reviewed the engineering report that declared Town Hall unsafe for gatherings and is working on outlining what it would take to make the building usable as a meeting hall. She said extremely rough, early estimates indicate doing this might cost between $35,000 and $40,000.

She said it costs about $7,000 per year to keep the Town Hall where it is.

The committee doesn’t have an official position on what should be done with the building, she said. Its mission at this stage is to find out what the options are, what the costs might be, and what most townsfolk want done with it.

Aside from surveys, Kuendig said there will be public forums during which people can talk about what they want to see done, but those have yet to be scheduled.

According to the committee’s research, Town Hall was built in 1830 by Methodists to serve as a meeting hall.

It got moved from one end of the Town Green to the other in 1855.

Town Hall consists of a ground floor and a basement, said Kuendig. Some of the beams in it are so old they’re round logs with the bark still on them. Under the false ceiling, there are lightbulb outlets covered by iron framing implements. Kuendig said these were put there to protect the bulbs when the place was used as a basketball court.

The potential costs would be a concern at any time, Kuendig said, but right now the town is grappling with more than $1 million in storm damage from rains in April. She said there’s been a federal disaster declaration, which will pay the majority of those costs, but Pittsfield has a small tax base and any large expense is easily felt.