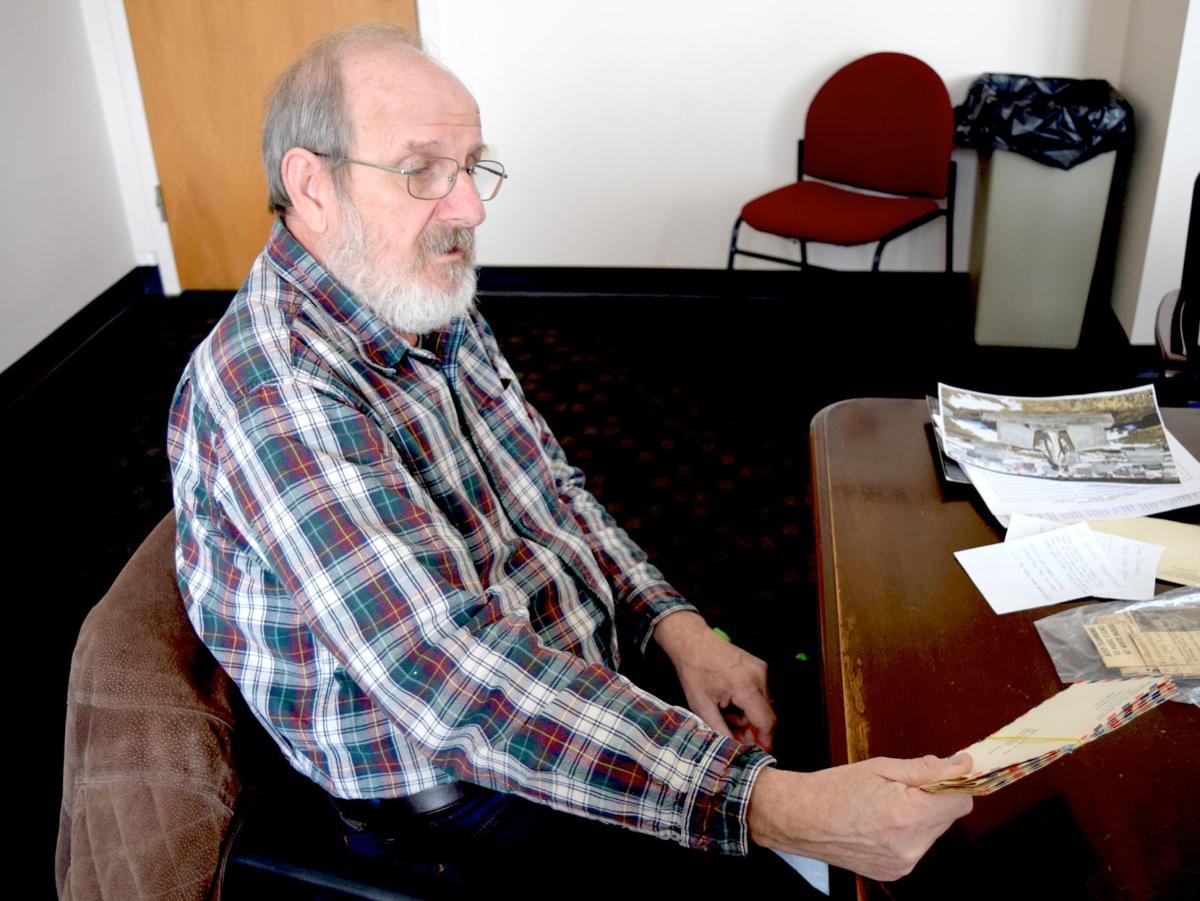 West Rutland resident Stanley Dziubek holds letters written by his uncle, Harry Rehm, to his wife while he was in the Korean War, at the Rutland Herald office on Thursday. The family is petitioning to have Rehm’s remains identified and returned to the family. 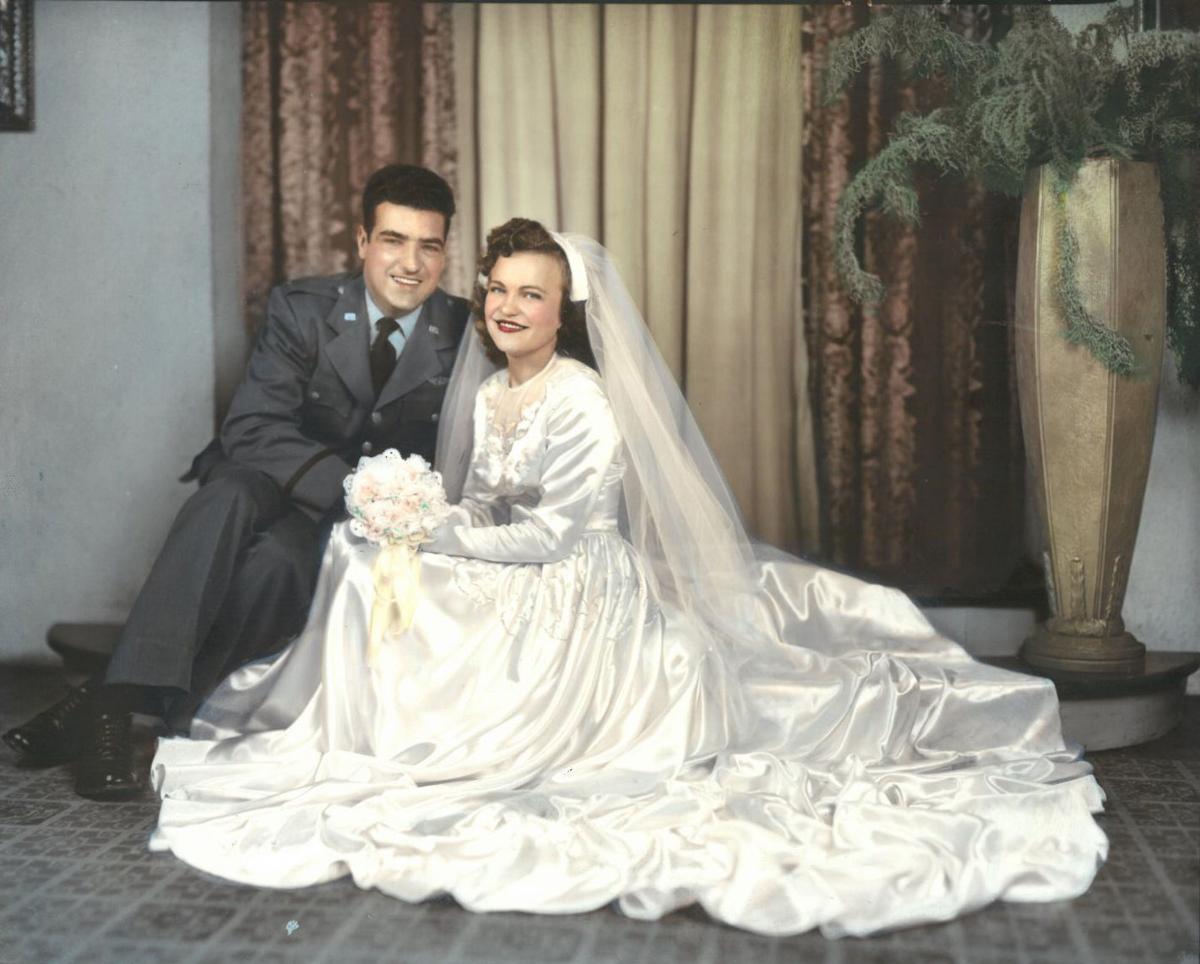 West Rutland resident Stanley Dziubek holds letters written by his uncle, Harry Rehm, to his wife while he was in the Korean War, at the Rutland Herald office on Thursday. The family is petitioning to have Rehm’s remains identified and returned to the family.

Rehm grew up outside Whitehall, New York, and married Sophie Dziubek of the West Rutland Dziubeks before he was shot down in the Korean War. His nieces and nephews are campaigning to get the government to attempt to identify his remains so they can finally bury them next to his widow, who died in 1969 and rests beneath a two-headed gravestone with a half left blank for her missing husband.

Dziubek said he does not remember his uncle.

“I probably met him between 2 and 3 years old,” he said. “I was a little too young for anything to stay.”

Dziubek said he grew up knowing his Aunt Sophie, but there were no family stories about his late Uncle Harry.

“It wasn’t a very talked-about thing,” he said. “Even when I got older, they didn’t talk about it. I guess it hurt too much.”

Dziubek said he does know that Rehm served in World War II and then was drafted back into the service during the Korean War.

“They called him back to train bombardiers in Korea,” he said. “That’s what he was doing when he was shot down — training a new bombardier, extra man on the plane.”

The B-29 bomber Rehms was on was shot down Dec. 30, 1952. He was declared missing in action the following day.

In 1954, the family got a letter from the government declaring Rehm dead, but then the wife of another man who was on the plane contacted them. Dziubek said a Lt. Wilcox, who was part of the same crew, claimed Rehm had survived the aerial battle and they conversed while on a truck between POW facilities. Wilcox was freed in a prisoner exchange at the end of the war, Dziubek said, but the North Korean government had no record of Rehm.

Dziubek said he had his uncle’s Purple Heart, which was presented to his aunt, and wanted to inter it to keep it from winding up sold as curio someday. He said interring it with Rehm’s remains seemed like the best option — if only the family could find them.

“The war ended in July 1953,” Zimmerlee said — noting that while the fighting ended, the war never officially ended. “We weren’t able to go to North Korea and recover remains. The Chinese and North Koreans agreed to collect whatever remains they could find and ship them to us.”

Zimmerlee said 4,000 sets of remains were shipped. Not all were identified, he said, and some were identified inaccurately. The U.S. did its own tests to identify remains.

“They got down to about 800,” he said. “The government was in a hurry to finish up the war and get everyone to stop talking about it.”

The remainder were buried as unknown soldiers, though the government maintained a forensic file on each one. He said roughly half came from POW camps and half came from isolated or temporary graves. In many cases, Zimmerlee said, the government has been able to narrow down who the remains belonged to by a process of elimination.

Government investigators started by looking for identifying items such as dog tags. Bone structure allowed them to estimate height, age and range. Some were identified as airmen because they were found among aircraft wreckage. Some were narrowed down by uniform type and the units active in the area the remains were found.

“Those are really guessing games,” he said.

In the case of Rehm, Zimmerlee said, the last known radio contact with his plane provides an indication of where it went down, and the unidentified remains include one set that was found within 10 miles of that site. He said that is far from conclusive, though — several other planes were shot down within a 10-mile radius of that spot.

And Rehm couldn’t have died in the crash if he conversed with Wilcox as a POW. Zimmerlee said POW records pose their own difficulty. Chinese military officials recorded the names of POWs, he said, by transliterating them phonetically into Chinese. Translating those back into English, he said, is an ongoing challenge. On top of that, Zimmerlee said, there is reason to believe more than 1,000 Korean War MIAs were secretly kept as prisoners by North Korea and China.

Zimmerlee said the government decided to exhume and conduct DNA testing on the remains several years ago, but the process is moving slowly. He said he hopes petitions like the one the Dziubeks are circulating asking to make Rehms a priority for testing will speed the process along.

“It should be a fairly quick and easy process,” he said.

I am the Genetic Next of Kin for Harry Rehm. My Dad's DNA is the one that is on file, and I will be contacted if and when his remains are identified. My Dad was Uncle Harry's Brother. If there are remains identified, I will be the one to claim them as I am a a Rehm. He has no brothers and sisters still alive, and I have been in contact with the government for years concerning this as it was one of my Dad's last wishes. The Purple Heart that you have should be in the hands of his biological Family if his wife is no longer alive. Again, I am the next of kin, so I am the one in charge of his remains if they are ever found.