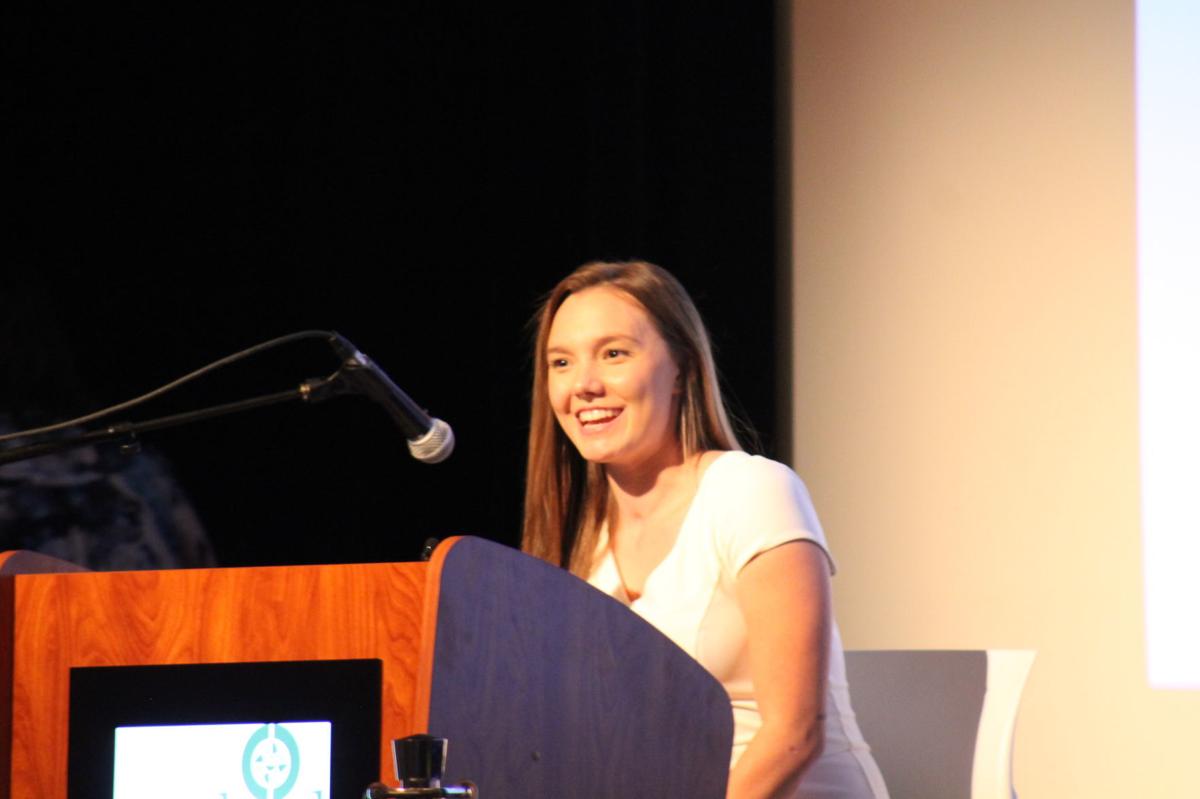 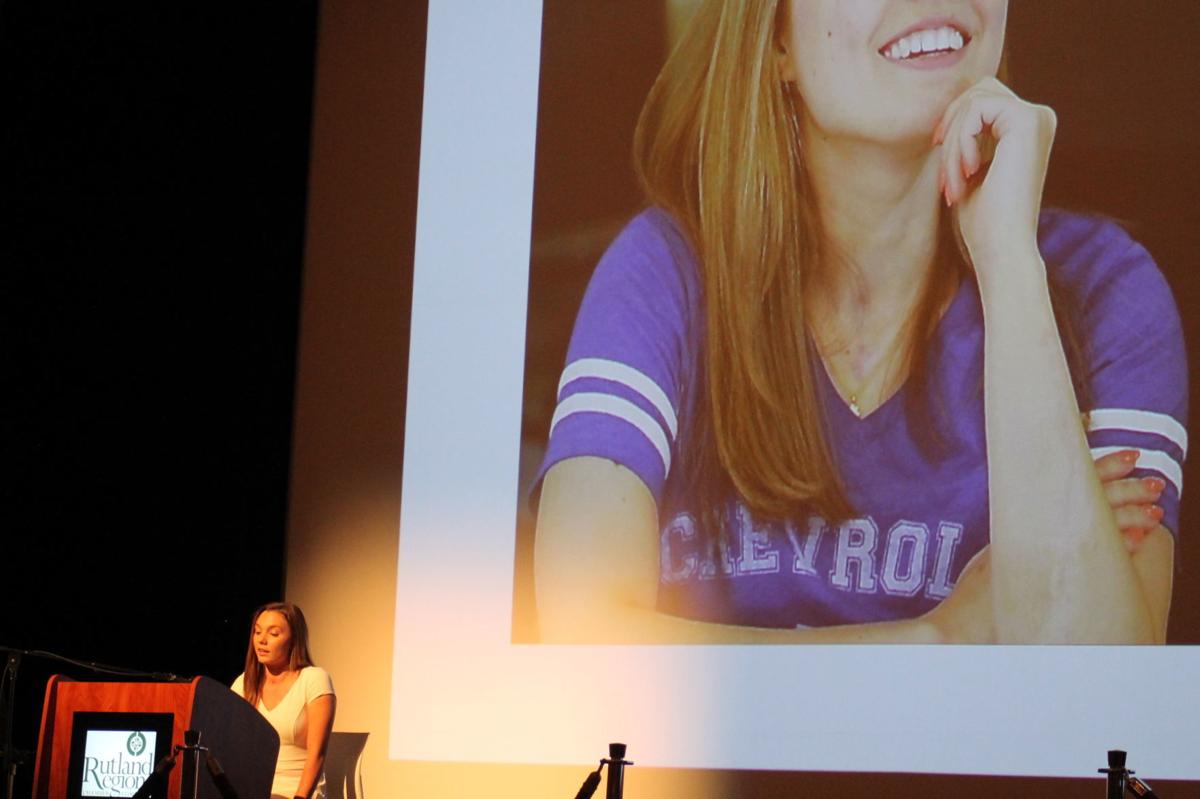 Stephanie Shaffer, who overcame losing both legs in a explosion in 2018, speaks at the Rutland Regional Chamber of Commerce annual meeting at the Paramount Theatre in Rutland on Thursday.

Stephanie Shaffer, who overcame losing both legs in a explosion in 2018, speaks at the Rutland Regional Chamber of Commerce annual meeting at the Paramount Theatre in Rutland on Thursday.

Schaffer, 23, of Rutland, spoke at Rutland Region Chamber of Commerce at the Paramount Theatre, addressing the theme of “Strength and Resilience” to a room filled with legislators, business owners and community leaders who didn’t even cough or clear their throats while Schaffer talked about her recovery from her 2018 injury.

While in the Bahamas with family and friends, Schaffer got on a tour boat on June 30, 2018. The boat exploded, killing an Atlanta, Georgia, woman and injuring Schaffer so badly she would need to have both legs amputated. She had also suffered spinal cord injury and brain injuries.

She told the audience about her disappointment when a Boston doctor, whom she believed could “fix” her, told her she might not walk again.

“Here I was again, facing another problem that felt too big. I cried myself to sleep that night, and then I woke up, and I took everybody by surprise. I looked at them, and I said, ‘They said I wouldn’t survive, and I did. They said I wouldn’t get out of kidney failure, and I did. They say I won’t walk. Watch me.’ Maybe there wasn’t other people with the same injury as me that were out there walking. But why couldn’t I be the first?” she said.

On Thursday, Schaffer walked across the Paramount Stage on prosthetic legs, with assistance from a walker until helped to a chair behind the lectern where she spoke.

Early on, Schaffer talked about the position she had recently accepted as the ambassador for the 2019 Gift-of-Life Marathon.

On Thursday afternoon, Schaffer said she had accepted the offer to represent the blood donation marathon, which has allowed Rutland to set donation records, “without having to think about it.”

“Without blood being donated at the time I had been hurt, if there wasn’t that extra blood, I don’t think I would still be here,” she said.

Before her accident, Schaffer donated blood once, she said Thursday, but anemia had prevented her from being a regular donor.

She said she hoped potential donors would hear her story and understood how important it was to give blood.

“They may not see the people who are receiving their blood, or they may not know them, but they really can save lives. Maybe it’s an inconvenience to go out and donate blood on the day of a drive, but there are going to be people, and it’s really a life or death situation. I would hope to just be a reminder that it’s people like me that are here because of people that choose to donate,” she said.

During her speech to chamber members, Schaffer talked about how a positive mental attitude had turned around her recovery. As an example, she said she knew she faced real challenges the first time she tried to use prosthetics because her lengthy recovery to date had left her weak.

“But I didn’t care. No longer worried about how cool I was, if my bald spot was showing or even how terrified I was in that moment. I went down in front of that huge crowd that had gathered, and I strapped those legs on,” she said.

While Mary Cohen, executive director of the chamber, said Schaffer was chosen as the speaker because she embodied what the chamber leaders considered the Rutland area’s strength and resilience, the annual meeting covered other business.

Donald Billings, owner of Roots: The Restaurant and The Bakery in downtown Rutland, was named the 2019 Business Leader of the Year.

A new award, the Community Leader of the Year, was given to Terry Jarrosak, locally known by his on-air radio alias, Terry Jaye, the program manager for Catamount Radio. Jarrosak was introduced by Steve Costello who said Jarrosak’s contributions included working with the Gift-of-Life Marathon, the Stuff-A-Bus event collecting food for the needy and other charitable events.

But Schaffer was the final speaker for the event and shared lessons she’s learned since her life changed so drastically. She said if she could have known what challenges she faced, she probably would have pictured herself as someone who had been defeated and given up.

“I think we all tend to underestimate ourselves and until we jump into a challenge with everything that we have and all the support that we can find, we will never know what we are truly capable of. I may not be walking unassisted yet but what I have done is, I have gotten through more than 30 surgeries while keeping a smile on my face. I have stood on my own brand-new feet. I have walked with crutches. I have learned to bike with my hands and to swim with no feet. I have kayaked and traveled. I have met new people, cheered my sister on, laughed with my family and had glasses of wine with my friends. I haven’t just survived; I’m learning how to really live. And the best part is — I’m just getting started,” she said.