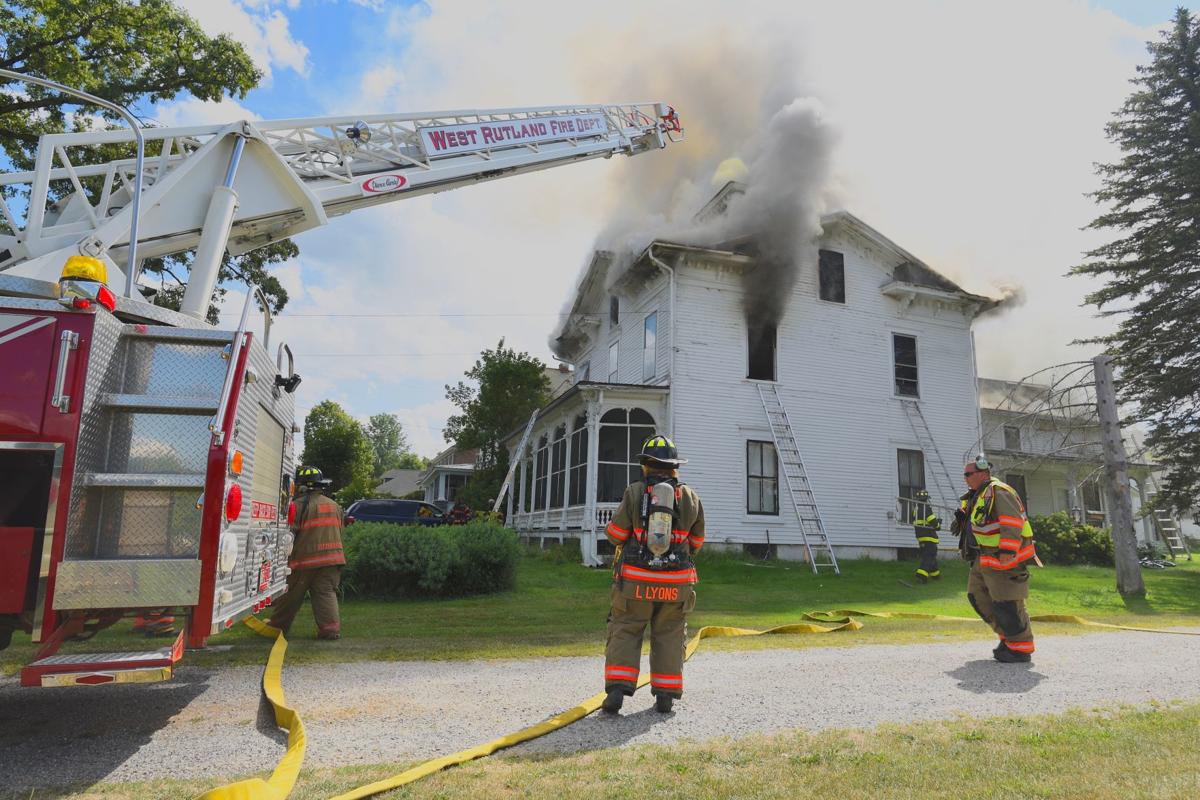 West Rutland firefighters use the ladder truck to knock down a blaze at 254 Clarendon Ave. on Thursday afternoon. 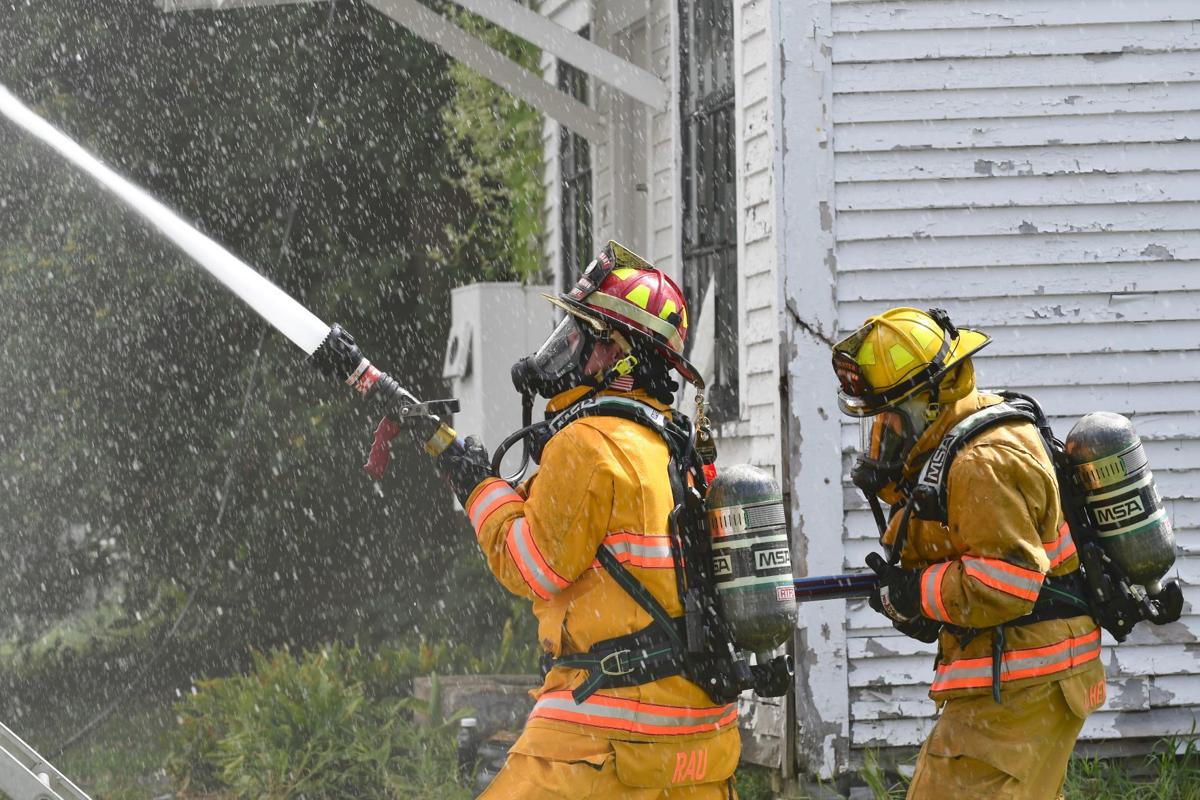 Rutland Town firefighters try to knock down a blaze at 254 Clarendon Ave. on Thursday afternoon in West Rutland. 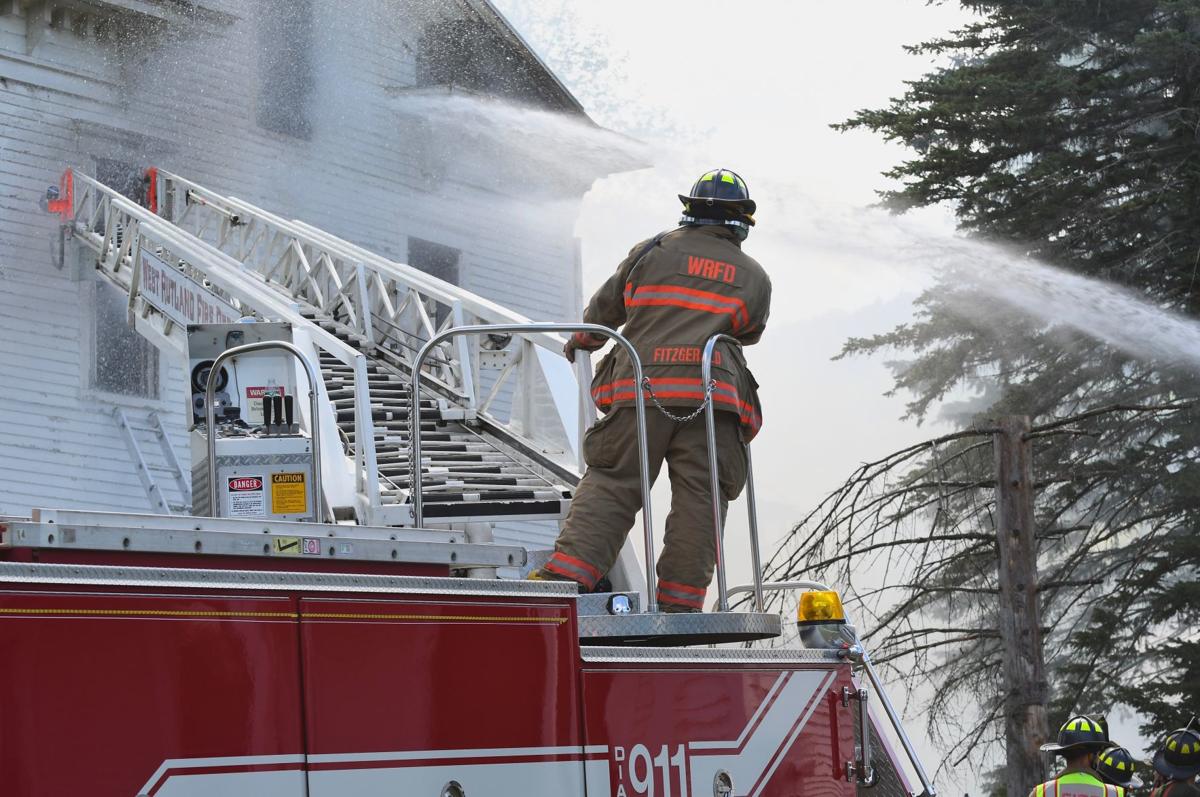 West Rutland firefighters use the ladder truck to knock down a blaze at 254 Clarendon Ave. on Thursday afternoon.

Rutland Town firefighters try to knock down a blaze at 254 Clarendon Ave. on Thursday afternoon in West Rutland.

Fortunately, Deputy Nathan Webster and Lt. James Bennick, of the Rutland County Sheriff’s Department, were right next door on a call when neighbor Mike Chaloux and his brother-in-law Tim Murray smelled smoke as they unloaded a U-Haul in their adjacent driveway.

Chaloux said homeowner Greg Felion was in the shower, and his children had already walked over to Chaloux’s house when neighbors noticed the fire at 254 Clarendon Ave.

“We looked around, and saw on the very corner over there, there was smoke,” Chaloux said. “I ran in there shouting ‘Greg! You got to get out! Your house is on fire!’”

“We turned around and the house was on fire,” said Bennick, who stayed to direct traffic while firefighters battled the blaze. “Smoke was rolling down the side of the house, and Deputy Webster ran in to make sure no one was inside.”

Chaloux said Felion ran back inside the house to rescue his dogs before taking shelter on Chaloux’s porch.

West Rutland Volunteer Fire Department Second Assistant Chief Tom Lacz said firefighters got the call at 2:25 p.m. As soon as the sheriff’s department confirmed there were flames coming out of the second-story window, he called the Rutland City Fire Department, which was on scene in minutes.

“It was three hours before we felt we had it under control,” said Lacz. “We attempted to make an interior attack, but the temperature upstairs was 900 degrees when city arrived. ... The roof started to collapse 20 minutes after they got there.”

When firefighters realized the roof was collapsing, Lacz said they attacked with two blitz attack hose lines mounted from the ground and a ladder truck from the exterior for a half-hour before they sent interior crews back in.

“The boys made very good headway at that point,” Lacz said. “The stubborn part was the back section of the house where the roof collapsed.”

Firefighters brought trucks to both sides of the building and combined water efforts from hoses on the ground, off the ladder trucks and into the second-story windows.

Lacz said an excavator was called in from Fabian Earth Moving to peel the roof off, but there was fire in the walls and the attic growing from the original fire in the rear corner of the second floor.

“We still don’t know what the cause was,” Lacz said later Thursday evening. “It’s an old structure. If someone sets fire upstairs, it’s going to travel quick.”

“I’m 92, and it was here when I was a kid,” said Felicia Burns, who was among the local residents who flocked to the property.

Lacz said there was extensive damage to the house and couldn’t comment on whether it could be saved.

West Rutland’s department finally arrived back at the station just after 7 p.m., and everyone emerged safely.