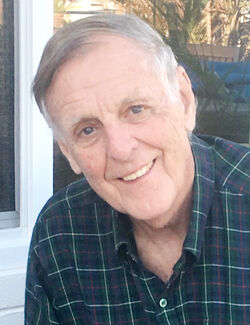 Alan R. Woodbury SPRINGFIELD — Alan R. Woodbury, 76, died unexpectedly Thursday, July 16, 2020, at his home. He was born Aug. 25, 1943, in Springfield, the son of Karl and Berta (Wilhelm) Woodbury. He graduated in 1962 from Springfield High School and later, from Stockbridge University. Mr. Woodbury served in the Army Reserves. On May 1, 1965, he married Valery Haven in Springfield. He was a Master Florist working with his parents in the family business for many years, taking over in 1973, constructing a new store, Woodbury Florist and Nursery, in 1975. He retired in 2007 but continued to work part time. Mr. Woodbury was a Springfield Chamber of Commerce board member earning Citizen of the Year Award in 2002 and belonged to Springfield on the Move. He enjoyed sailing Lake Champlain, skiing, playing on his tractor, traveling via sailboat and touring Europe. Survivors include his wife of Springfield; daughter Michelle of Milton, son Scott of Madeira Beach, Florida; four siblings, Nola Woodbury of Eugene, Oregon, Karla Underwood of Windsor, Col. Paul and Daniel Woodbury; many nieces and nephews. A celebration of his life will begin at 3 p.m., service 4 p.m., Saturday, Aug. 1, at the Woodbury home, Park View Road in Springfield. Memorial contributions may be made to Springfield Family Center. Arrangements are by Davis Memorial Chapel in Springfield.

I'm sorry for your loss. Alan was a nice man and will be missed very much.

Val, Sending my sincere sympathy in the loss of Alan. May your find memories give you comfort🌹