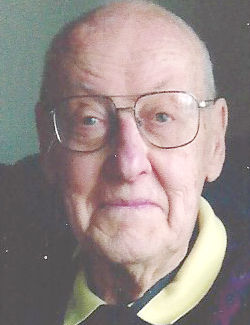 Alfred A. Majewski RUTLAND — Alfred A. “Al” Majewski, 94, of Rutland, Vermont, died Feb. 13, 2020, at his home. He was born Jan. 26, 1926, in Brooklyn, New York, the son of Adam and Clara (Benatovich) Majewski. Al graduated from Power Academy in New York City and was an All-American in baseball, basketball, football and track. He joined the U.S. Marine Air Corps (1944-48) with the First Marine Air Wing, also known as the “Flying Leathernecks,” played basketball on the Marine Air Corps team and served two years in China. After his military service, Al attended Boston College with scholarships in basketball and football. His athletic prowess also included playing shortstop for the New York Giants minor league team for six years and later with the New York Yankees. On Oct. 23, 1954, he married Genevieve Regina Dolan in Brooklyn, New York. Al worked for IBM for 13 years as a statistical analyst, where he enjoyed arranging employee outings, as the IBM Club president. Later, when Al and Gen moved to Pennsylvania, he worked for Western Union and Tenneco Corp. His true passion was photography, first as a freelance photographer, then as a camera shop owner and finally as a professional photographer in the Poconos. The couple vacationed at Lake Bomoseen and purchased land in Hubbardton, Vermont. They later moved to Wells, before settling in Rutland. In 1990, Al loved entertaining senior citizens in area retirement homes, with comedy acts and songs from vaudeville days. He was a longtime member of Christ The King Church. He was predeceased by his wife; son Matthew Majewski; sisters Blanche Cannon, Jean McNeice and Veronica “Ronni” Paguaga; brothers Julian, Stanley and infant brother Vincent. Survivors include a daughter, Clare Majewski of Park City, Utah; a son, Vincent Majewski of Blakeslee, Pennsylvania; and many nieces and nephews. The Mass of Christian Burial will be celebrated Wednesday, Feb., 19, 2020, at 2 p.m. in Christ The King Church. Following the service, a reception will be held in Engle Hall. Memorial contributions may be made to the VNA & Hospice of the Southwest Region, 7 Albert Cree Drive, Rutland, VT 05701. Burial will be in Calvary Cemetery in Drums, Pennsylvania. Arrangements are by Tossing Funeral Home.

Stephen & I are so sorry for your loss. Your Dad gave my father the gift of friendship and we are forever grateful for the love he gave my Dad when our mom passed. Truly a selfless man with his time and love.

I met Al several years ago when I was greeting people as they came into Walmart. What a nice guy. He would often stop and talk and tell jokes. From that time on we became"friends". When he came in he would always stop and talk. When I took another job at Walmart, he would look for me and he would come and visit. One day he brought in two pictures of him in a Giant uniform and told me about his career.I read about the talk he gave at the senior citizens about his Marine experience. My brother-in-law was a career Marine and just died at the age of 95. I have not seen him in a long time and often wondered how he was. A good man that will be greatly missed!