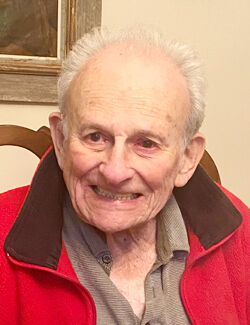 Alfred Goldberg LUDLOW — Alfred Goldberg, age 94, of Barrington, Rhode Island, and formerly of Chestnut Hill, Massachusetts, and Ludlow, Vermont, passed away Wednesday, Oct. 20, 2021. Alfred was predeceased by his parents, Isaac and Riva (Chaiken) Goldberg; stepfather, David Cohen; sister, Phyllis Goldberg; stepsister, Harriet (Cohen) Schechtman. Alfred was a United States Marine, a graduate of MIT, and mechanical engineer. An avid outdoorsman who enjoyed skiing, kayaking and cycling, Alfred was a fiercely independent soul with a kind heart and a keen interest in people and the world around him. He is survived by his stepbrother, Morrel Cohen, and was “Uncle Alfred” to many loving nieces and nephews. He will be missed dearly. A memorial service will be held at a later date. Donations in his memory may be made to Black River Academy, P.O. Box 73, Ludlow, VT 05149; or The Nature Conservancy, 4245 North Fairfax Drive, Suite 100, Arlington, VA 22203-1606. Arrangements are in the care of Sugarman-Sinai Memorial Chapel, Providence www.sugarmansinai.com.