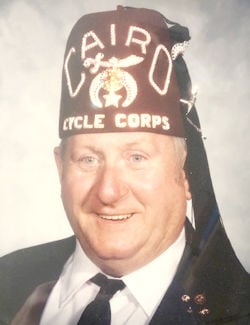 Andrew C. "Sonny" Hayes Sr. CASTLETON — Andrew Charles “Sonny” Hayes Sr., 82, died Wednesday, Feb. 5, 2020, at Rutland Health and Rehabilitation Center. He was born May 20, 1937, in Castleton, the son of Harriet Hayes. He attended Castleton schools and enlisted in the U.S. Navy in 1955, serving during the Korean War until his honorable discharge in 1958. Mr. Hayes was employed by several construction companies in the early years, as well as the Town of Castleton highway department, then for 31 years as a truck driver for Goddard Transportation. Following his retirement, he worked for Norton Bros. He was awarded the Vermont Truck and Bus Driver of the Year in 1997 logging in over 3 million miles accident-free. He served Castleton as a special police officer in the 1960s and was a past chief of Castleton Volunteer Fire Department. He was a member of The Loyal Order of Moose Lodge #1122, Free & Accepted Masons Lee Lodge #30 in Castleton, Cairo Shrine and their Cycle Corps, Scottish Rite and York Rite, Fraternal Order of Eagles Aerie 3907 in Fair Haven, Crippen-Fellows Post #50 American Legion, Veterans of Foreign Wars and Boy Scouts of America. Survivors include a daughter, Sherry Falk, of Lexington, North Carolina, son Andrew C. Hayes Jr, of Lake George, New York, and Jensen Beach, Florida, and son Master Chief Alan C. Hayes (USN retired) of Williston, South Carolina; four grandchildren and five great-grandchildren. Calling hours are from 4 to 7 p.m. Friday, Feb. 14, at Durfee Funeral Home, 119 North Main St., Fair Haven. Fraternal services will be the Masons at 4:30 p.m. and the Eagles at 5 p.m. The funeral service will be held at 11 a.m. Saturday, Feb. 15, at St. John the Baptist Church in Castleton, followed by a reception at the Fair Haven Eagles Club. Burial with military honors will be at a later date in Hillside Cemetery. Memorial contributions may be made to Cairo Shrine, 51 Washington St., Rutland, VT 05701; or BAYADA Hospice, 190 South Main St. Suite 2 South Side, Rutland, VT 05701.

So sorry to hear you have passed away Sonny. I will never forget all the good times we had, doing benefits for the Shriners.

So sorry Sonny has gone to the other side. He was the only relative ( beside his children) that my mother had that I know of and now he is gone as well as my mom. Say hi to her for me .

sorry to hear of Sonny's passing he was a good man and a good driver for us.