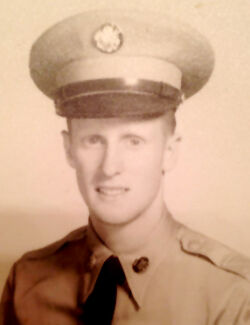 Armand "Red" Fleury MOUNT HOLLY — Armand Pierre Paul “Red” Fleury, 86, died Jan. 4, 2021, at home, surrounded by family, following a short illness. He was born Jan. 13, 1934, in Claremont, New Hampshire, the son of Eugene and Rosanna Fleury. He attended St. Mary’s School in Claremont. He married Carol Ann Adair in Claremont on July 13, 1955. They divorced in 1958. He married his soulmate, Ruth Charlotte Josselyn, on Dec. 9, 1967. Red served in the U.S. Army during the Korean War as an airplane mechanic. He received a Good Conduct Medal and National Defense Service Medal. He worked in the machine tool industry for over 48 years, at Jones & Lamson Machine Tool Co. and Fellows Corp. in Springfield, Vermont, and for a short time at Door Crafters in Ludlow, Vermont. Mr. Fleury was a member of the local union and served as union steward. He was also an active member of Ballard Hobart American Legion Post #36 in Ludlow for over 65 years and enjoyed taking part in parades and placing the wreath on the tomb of the soldier. He was a car enthusiast and enjoyed working on cars in his garage. He never hesitated to help others out on a project and was always on the go, visiting friends around the area or driving by to say hello. Survivors include his wife, Ruth (Josselyn) Fleury of Mount Holly; two daughters, Teresa Blaisdell of Lancaster, New Hampshire, and Kathleen Dougherty of Avondale, Arizona; a goddaughter, Mary Ann (Belanger) Jeffery of Claremont; one brother, Victor Fleury of Claremont; his granddaughter, Hillary Hunt of Los Lunas, New Mexico, several other grandchildren and great-grandchildren; several nieces and nephews; and an endless list of good friends. He was predeceased by his father, mother; one brother, Henry Fleury, and one sister, Cecile (Fleury) Belanger. In lieu of flowers, memorial contributions may be made to The American Legion, 135 Main St., Ludlow, VT 05149 or www.legion.org. There will be no calling hours due to the current pandemic. The military funeral honor guard will provide a ceremony later at the convenience of the family.

Great friend an co-worker , we will all miss him . RIP Red !