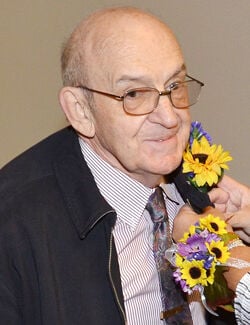 Charles P. Blais BOUND BROOK, N.J. — Charles P. Blais, 84, formerly of Rutland, died Sunday, Feb. 14, 2021, after a brief illness. Charlie was married to his loving wife, Jeannette Witalec, for over 55 years. Charlie graduated in 1955 from Chester High School. After graduation, Charlie was an active member of the Army Reserves for over 15 years. He had strong roots in Ludlow serving as a special officer for the Ludlow Police Department, serving on the Ludlow Board of Trustees, and working for the Ludlow Ambulance Service. Charlie was employed by the Fellows Gear Shaper Co. in Springfield for over 20 years prior to transitioning to General Electric where he retired in 2006 after 35 years of service. After retirement, Charlie filled his free time with his vast array of hobbies. Charlie was passionate about his vegetable and flower gardens. He was most well-known for sharing his plentiful bounty of prize-winning squash, eggplant and tomatoes to every passerby. He loved cooking and eating, especially his favorite traditional Polish food, pierogi. Jeannette always kept Charlie on his toes with a long honey-do list but when asked, he would say he filled his time puttering around the house looking for any project to keep him busy. Charlie was predeceased by his parents, sisters (Anne and Martha) and brother (Arthur Blais). Survivors include his wife, Jeannette; brother Philip Blais (California); sister Eva Blais (Connecticut); brother-in-law John Witalec and wife Sylvia Witalec of Ludlow, Vermont; son Michael Blais and wife Maria Blais of Mount Holly, Vermont; son Ronald Blais of Bridgewater, New Jersey; six grandchildren, Michele Burrington (Joseph Burrington), Melanie Blais McAtee (Michael McAtee), Megan Blais, Michael Blais, Garrett Blais, Brandon Blais; and three great-grandchildren, Teegan, Mackenzie and Martin. No celebration of life will be held at this time. In lieu of flowers, memorial contributions may be made to the Rutland County Humane Society which provided Jeannette with her second-best friend: Rutland County Humane Society, 765 Stevens Road, Pittsford, VT 05763.

Our love goes out to the family of Charlie.. our long time neighbors on Orion Avenue in Ludlow. He was so active in Ludlow - active doing everything and anything to help the Town, his friends and neighbors and just about anyone who needed his assistance. Please know Ron and I and my Mom (Charlotte) are all thinking of you.

So sorry for the loss of Charlie. I worked with him for over 30 years. He was one of the kindest persons I ever knew. He bought joy into so many people who worked and knew Charlie. We had a lot of laughs at GE . I will greatly miss him he was a good friend.