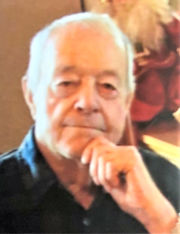 Chester E. Peterson PROCTOR — Chester E. Peterson, 90, a lifelong resident of Proctor, died Friday, March 29, 2019, at the Rutland Regional Medical Center, following a brief illness. Chester was born in Proctor on May 21, 1928, the son of the late Carl Edwin Leander and Irene Adeline (Moran) Peterson, their fifth child of 11. He attended Proctor schools. As a young boy growing up on Beaver Pond Road, Chet helped his family tend their large vegetable gardens, raise chickens and sell eggs, milk the family cow and worked a newspaper delivery route. As a young man, he began to establish his trucking business by purchasing a new dump truck. In August 1950, he enlisted in the U.S. Army National Guard during the Korean War. He was stationed at Camp Pickett, Virginia, for basic training and in October 1951, the 43rd Infantry Division was sent to active duty overseas to Munich, Germany, where he served as Motor Sergeant. He was honorably discharged in May of 1952. Chester married his childhood sweetheart, Olive Nelson, also of Proctor, in 1950, and they were blessed with three children. Always being a hard worker, Chet juggled multiple jobs for many years, working for Vermont Marble Co. along with being self-employed in his trucking/excavating business, plowing snow and contracting with the Town of Proctor fulfilling trash collection routes. He also very much enjoyed being hired at the Proctor-Pittsford Country Club to work on various excavating projects. Chet enjoyed snowmobiling, fishing, hunting and spending time with his grandchildren, especially taking the little ones on adventures to Beaver Pond to find and feed the ducks. Being a devoted husband, he was also a dedicated caregiver for many years to his wife, Olive, when she became stricken with rheumatoid arthritis limiting her abilities later in life. Chester was a member of the Freemasons Masonic Lodge, Union Church of Proctor, and a former member of the Proctor Fire Dept. for many years. For his last two years, he resided at St. Joseph Kervick Residence assisted living where he was very happy and enjoyed socializing, reading, watching movies and joining activities. He is survived by two sons Scott Peterson and wife Lori, of Lyman, NH, Robert Peterson and wife Gail, of Rutland Town; one daughter, Carlene Smith and husband George, of Proctor; five grandchildren Erica, Sven, Heidi (Kevin Frye), Alissa and Robert Max Peterson; one great-granddaughter, Lorelei Frye; three wonderful sisters Jean Donaghey, Betty Johnson and Helen (Dick) Savery; a sister-in-law, Alma Nelson; and many cousins, nieces and nephews. He was predeceased by his wife, Olive, on Aug. 26, 2014; one sister, Ruth Ferguson, in 2017; six brothers Ralph, Robert, Herman, Donald, Roy and Paul; and a special friend/brother-in-law, Ray Ferguson, in 2018. He also leaves his friends and the staff at St. Joseph Kervick Residence. We wish to extend a special thank you to all the caring staff at St. Joseph Kervick Residence for providing a home-like environment for our father. A funeral/celebration of life service will be held at the Union Church of Proctor, 5 Church St., Proctor, on Tuesday, May 21, 2019, at 11 a.m. A reception will follow at the Parish House. Those wishing may make memorial contributions in Chester’s name to the Activities Fund at St. Joseph Kervick Residence, 131 Convent Ave., Rutland, VT 05701. Funeral arrangements are being handled by the Barnard Funeral Home, Pittsford.