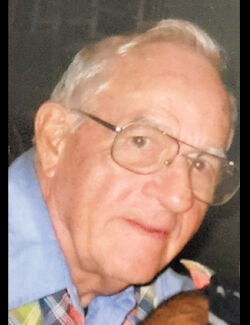 Clayton L. Cross SPRINGFIELD — Clayton L. “Bucca” Cross, 89, died Sunday, Dec. 27, 2020, at his home, surrounded by his loving family, after battling a long illness. He was born Aug. 12, 1931, in Springfield, Vermont, to parents Floyd and Lois (Spafford) Cross. He graduated from Springfield High School in 1949. He married Ruth Burton on Oct. 7, 1956. He served in the United States Army and was a member of the American Legion and a member of the Springfield Church of Christ. He was employed at Jones & Lamson for many years until his retirement in 1993, and worked at the Springfield Country Club until he 80 years old. He and his wife, Ruth, spent 26 winters in Florida after his retirement. He was a man who loved his family dearly. He loved to play golf and hunt.Survivors include his wife, Ruth (Burton) Cross; his son, Ken Cross (Kris) of Luther, Oklahoma; his daughter, Cindy Mellish (Don) of Perkinsville, Vermont; two brothers, Oscar Cross of Windsor, Vermont, and Gary Cross of Perkinsville, Vermont; three sisters, Patricia Ploof of Chester, Vermont, Doris Olmstead of Wilton, New York, and Sheila Miller of Cape Coral, Florida; six grandchildren, seven great-grandchildren; and several nieces and nephews. He was predeceased by his brother, Floyd Cross; three sisters, Laverne Barton, Mary Miller and Carol Sanchez; and two great-grandsons, Issac and David Tremblay. Services will be held at a later date. In lieu of flowers, memorial contributions may be made to the Springfield Church of Christ, in care of Ernest Lamphere, 12 Lockwood Ave., Springfield, VT 05156. Davis Memorial Chapel in Springfield, Vermont, is assisting with arrangements.