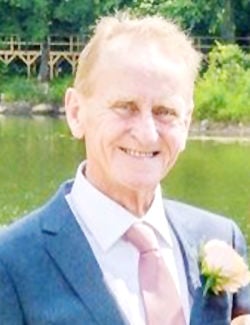 Dale A. Robb RUTLAND — Dale A. Robb, age 65, passed away peacefully in his home on Feb. 10, 2020. He was born in Haverhill, New Hampshire, to Michael Robb and Madeline Shallow Robb. Prior to moving to Rutland, Vermont, in 1985, Dale served in the U.S. Marine Corps where he was an active participant in the inauguration of President Carter. Dale then continued his education at the College of Saint Joseph’s where he attained his master’s degree in counseling. Dale then became a professor for colleges across the state of Vermont. Dale helped many people in the Rutland community with mental health and was promoted to CEO at Serenity House, where he continued to help people with addiction. Dale was a gifted athlete and his competitive drive allowed him to continue to participate in sports throughout his life, as well as serve as the president of the New Hampshire Boys State in his early years. He enjoyed cribbage, golf tournaments and poker nights with all of his friends. Dale is survived by his daughter, Shawna Byer and husband Jason Byer; his siblings, Patricia Cook and husband George, Janet Young and husband Eddie, Francis Robb, and Theresa Lavoie and husband Larry; as well as numerous nephews and nieces. Dale was a monumental member of the Rutland community where he touched many lives with his caring and generous heart right up until his last days. Please join us in celebrating his life at the Rutland Country Club at 275 Grove St. in Rutland on Saturday, Feb. 15, from 10 a.m. to 12 noon. In lieu of flowers, the family asks to please donate in Dale’s name to Serenity House at 98 Church St., Wallingford, VT 05773. Arrangements are by Tossing Funeral Home.

I knew Dale first as a student in our psych and human service program at the College of St. Joseph. After graduation, he taught for us and also provided inpui into the development of our undergrad and graduate degree and certificate programs in alcohol and substance abuse. I knew him as a builder, poker player, clinician, and most importantly as a dedicated father and model human being for all who knew him. He served his family, his community, and his country with honor and will be long remembered by all who were fortunate enoiugh to know him. Thanks Dale.

Rest In Peace my friend....